I’m lying in bed awake, really early, when Lindsay comes into the room. I can hear her coming—she always slams her bedroom door behind her, and then ours, on the way in. There’s just enough sunlight falling on our curtains for me to see the halo of her bedhead, and her “sucky fingers” thrust in her mouth. And she’s carrying something. Normally she arrives fully accessorized with her Special Blanket and her Lindsay Bear, but this morning she’s carrying something that looks like a pencil. Why would she bring a pencil to bed? She places it carefully on the bedside table and climbs into the bed, sucking madly at her fingers. I reach across her to see what the mysterious object is. Ah: a tire-pressure gauge.

So … did she hunt around her dark bedroom for the tire pressure gauge this morning, or did she go to bed with it and cling to it all night? Either scenario is realistic. You see, that isn’t just any tire pressure gauge. That’s a relic from our ’84 Volvo wagon, which we’d taken to an auto wrecking place the day before. You can’t tell your kids that your car is going away to live on a farm, so we’d leveled with them about our plan for the ultimate demise of our old family car. They didn’t take it well. So, we had a Goodbye Volvo party that morning, and one of the things the kids did was to take mementos from the car, like strips of leather (which pulled easily from its dissolving seats), its old key (the plastic part completely gone), and this tire pressure gauge.
It was a brief party—more of a ceremony, actually. Alexa and Lindsay both made cards. Here is Alexa's card: 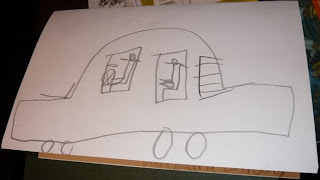 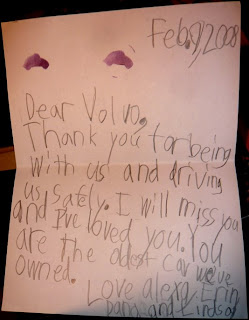 I've long considered starting a blog, and I've finally resolved to try it out, at least as an experiment. I love to write.

My first encounter with a blog was in the late 90s, when I was looking to buy a bike frame online and the web merchant didn't have good photos of the color. So I searched on "stardust purple Guerciotti" or whatever and came across some guy's blog (which was basically his home page, blogging not having been named or made mainstream at this point). This guy's blog was the web equivalent of a grade school kid shyly showing a friend around his house, showcasing his room and his toys. It seemed sort of sad, kind of a "this is my bike, do you like it?" thing. So I was aware, very early on, of the risk of self-indulgence that a blog presents.

With that in mind, I'm only going to try to post worthwhile, fairly polished essays to this blog. I'm not going to give a blow-by-blow of the humdrum goings-on in my life. (My brother asked what my blog would be "about" ... work, perhaps? No, not work. I do enough of that as it is. Besides, I'd hate to somehow get in trouble with my employer that way, and what I do for work isn't that interesting to a general audience anyway.)

I guess the more successful blogs confine themselves to a specific topic. Now, I love success and all, but I can't really imagine restricting myself that way. This blog will definitely cover some of my favorite topics on a regular basis: cycling, food, literature, writing, and parenting. But I am bound to wander into all kinds of other territory. It is easier to say what this blog won't cover: work (as I mentioned), politics, and mainstream sports (about which I have very little to say). I will try to keep within the realms of curiosity, investigation, and analysis, rather than pontificating. And I'll try to be funny (which I realize I've neglected to do so far in this initial post). Also, as a devoted reader of the New Yorker magazine, I may do a weekly list of articles in the current issue that I particularly enjoyed.

This will generally be a PG-13 blog. I suppose I'll periodically stray into R territory but I'll try to keep this clean and family-friendly.

I don't yet know the mechanics of this blogspot thing but I'm guessing there will be a way for readers to comment on my essays. I welcome this so long as the comments are thoughtful, reasonably polished, and inoffensive to any audience. And I would prefer that anybody who just doesn't like my stuff would find something better to do than a) continue reading it, or b) bag on me openly.

One more thing. I have a pretty big archive of my old essays, stories, and such and from time to time I'll post them here. (Part of the point of this whole endeavor is to have an easy way to store my writing offsite on a presumably secure server.) So I'm hoping a few times a week to contribute something old and something new. I invite you to laugh at either a) my younger, more outspoken and cheeky persona, or b) the lack of progress I've made since then. (I suppose it's possible you could laugh at both.)