Who is the guy behind albertnet? It has occurred to me that my so-called “complete” profile on Blogger doesn’t actually say much: just that my gender is “MALE” (their all-caps, not mine); that my Occupation is “specialist”; that I live in Albany, CA; and that I’m interested in cycling, food, literature, and parenting. 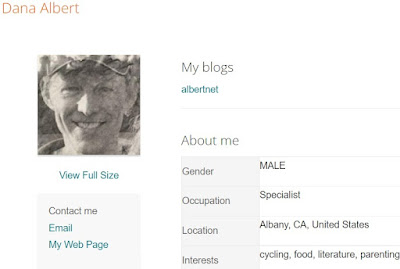 Of course you could learn all that from the blog itself, but that would take effort. Before making the commitment to spend any time on albertnet, I suppose you deserve the equivalent of the “ABOUT THE AUTHOR” blurb on the jacket of a book. That’s what this post is about.

DANA ALBERT is a graduate of UC Berkeley, where he earned a degree in English (not such a significant achievement since he grew up speaking English at home). He is a company man turned blogger (though still a company man) and is a regular contributor to albertnet. In fact, he is the regular contributor to albertnet. In addition, Albert’s Letters to the Editor have appeared in the Boulder Daily Camera, the Colorado Daily, the Rivendell Reader, and The New Yorker. He has also written holiday newsletters, chalkboard graffiti, lists of all kinds, and lots of checks. He lives in Albany, California.

(Hmmm. I don’t think that came off exactly right. Let me try again.)

DANA ALBERT is the author of “Everything You Wanted to Know About Getting A Vasectomy - But Were Afraid To Ask,” “Ode to the Corn Cob,” “Stop Pushing STEM,” and “From Farting Liberally to Liberal Arts - The Flatulence Files.” He has dreamed of winning the Man Booker Prize, The National Book Award, and the lottery.

(Gosh, that didn’t really work out either. Take three!)

COUNT DANA ALBERT was born on the family estate of Albertus Alberticus in the Pannonia province. He studied Barbaric languages and law at the Sorbonne but left before completing a degree. In 1985 he joined an artillery regiment in the South Orkney Islands. He took part in the Great Orkney Food Fight and after the defense of the Junior Enlisted mess hall table wrote “The Pizza Crust & Thousand Island Dressing Massacre,” which cemented his literary reputation. After leaving the army in 1988 he spent time in San Luis Obispo, California where he got involved in radio stations and bike shops, establishing himself as a world class troublemaker. Albert wrote two great blogs: albertnet and … okay, one blog. So far.

(Getting closer, but perhaps I ought to stick to the facts.)

DANA ALBERT is one of the top 30 million bloggers in the United States. His posts have been read less widely than the Bible, Shakespeare, and all other published works combined. His output has surpassed more than 1.5 million words, many of which have been read by others. His posts have been translated into dozens of foreign languages by countless users of Google Translate, surely. He died in 1976. Wait. Scratch that. He is alive and well. Relatively.

(Dang it! This is much harder than I thought! Bear with me…)

Born and raised in Boulder, Colorado during the ‘60s and ‘70s, DANA ALBERT made a full recovery and now lives in California. He is the author of albertnet, along with “Driver Keeps Warm by Seething About Chain Requirements,” “Campaign Signs – the Good, the Bad, and the Ugly,” and, most recently, “Autocomplete Zeitgeist Revisited.” His work has been praised by family members and sarcastic critics alike.

LINDSAY ALBERT’s delightful sketches atop the pages of albertnet have earned her a dedicated following of parents and grandparents, and a reputation as one of America’s finest blog illustrators under the age of twenty. Her work, alongside such posts as “Ask a Sinead O’Connor Fan,” “Never Discuss Politics,” and “Helping Teens Cope with COVID-19,” has surpassed even that of previous albertnet illustrators.

(Hmmm. Maybe I can actually use that. But it’d have to be alongside my own. So I have to keep working at mine.)

DANA ALBERT is a longtime staff writer at albertnet and a syndicated columnist. His columns, including “Ask a Sea Kayaker,” “Ask a Middle-Aged Guy,” and “Ask Dr. Tyre,” appear in more than zero blogs worldwide.

(Oh dear. Not quite there yet.)

DANA ALBERT is the author of an untold number of unread poems including “Ode to South Park,” “Urination Poetry,” “Ode on a Belly: Mine,” “Ode on a Chain Lube,” and “Ode on a Double-Edged Razor.” In 1989 he was nominated at the UC Santa Barbara Cycling Awards for “Most likely to form a rap group.” He was also considered, though not seriously, for an Honorable Mention in Retail Quarterly magazine for his essay “The Lotion Sniper.” He is almost unanimously reviled by hipster/poseur douchebags for his groundbreaking “Velominati’s ‘The Rules’ – Brilliance or BS?” and has been pestered by his children for almost two decades.

DANA ALBERT left his native land of Boulder, Colorado, to attend college in California in the late 1980s. His literary career was delayed by his dizzying climb up the corporate ladder (dizzying not due to heights achieved, but due to the ladder swinging around, and all that coffee besides). Albert is considered by many of his readers to be an authority on the spelling of “kindergartner.” He lives in Albany, California with his family, though his children keep moving away and his first cat died.

DANA ALBERT is a British-influenced unpublished short-story writer who was born in America and stayed. His first book, The Cowboys and Stagecoach, was indecipherable because he hadn’t yet learned the alphabet, and (probably as a result) it was never published. Albert won the Gold Plunger award for best writing about toilet emergencies, with such groundbreaking essays as “Train Trip – Part 3,” “Everest Challenge 2013 (Stage 2),” and “The Toilet Paper Hoarding Conundrum,” though he was subsequently disqualified due to conflict of interest, as he totally made up this contest and was the only entrant.

One of the twenty-first century’s most masterful prose stylists (according to his mother), DANA ALBERT was born at a hospital in June. After learning to read by essentially memorizing Cowboy Sam, Albert went on to be educated in an elementary school, following which he pursued a high school diploma, graduating on time in good standing, and then attended college at a university. Following his formal education he remained in the western hemisphere, where he launched a brilliant literary hobby. He has coached fifth graders in math; seniors in the use of the Android operating system; and high school kids in mountain biking. All of these activities are the rough equivalent of teaching literature at a prestigious university, at least as far as effort and noble intent are concerned.

(Yeah, I know, that pretty much went off the rails.)

DANA ALBERT is the bestselling author of the Princess Dariella series of children’s books, the basis for the hit Netflix original series Dariella, in his dreams. He would be the recipient of the Food Writers of America Rubber Spatula award for amateur food memoirs, if any such thing existed, based on the potential success of his essays “Easy Recipes for College Kids” and “Homemade Pasta.” He would go on to contribute to the Hulu/BBC adaptation of “My Humiliating Senior Prom,” if any such project were undertaken. He lives in Albany, California with his wife, one of his kids, his cat, and probably about 100 species of arthropods, if his home is typical.

(Perhaps there is a reason this book jacket task is typically carried out by publishers, not writers.)

DANA ALBERT was trained as an office worker. He has worked as a bike mechanic, an underwear canner, a radio station receptionist, and (though not professionally) as a dishwasher installer. He lives indoors. This is his first blog.

(Okay, that’s a wrap. Here’s the finished product … but I just realized my blog doesn’t have a jacket to put this on.)