What’s So Great About Sports? 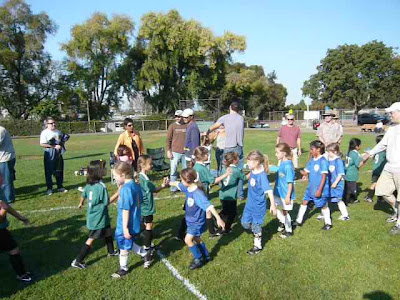 The front page of the San Francisco Chronicle yesterday had an article about professors decrying the expense overages of the university’s athletic programs:http://www.sfgate.com/cgi-bin/article.cgi?f=/c/a/2009/10/27/MN0L1AAUM3.DTL.

One professor is quoted as saying, “"We ought to stop subsidizing this program,” and a group of faculty members has formed called the “Sports Grinch Club.” Issues like budget overruns and their associated bailouts will be debated at the next Faculty Senate meeting.

I’m personally not interested in joining this debate. But I am interested to know how many members of the Sports Grinch Club support sports and/or athletic pursuits in general. I am aware of a divide between those who “get” sports and those who don’t. The Sports Grinch Club would do well to have some athletes, or former athletes, among its ranks, to establish credibility with the sports fans. If some non-exercising, tweed-wearing, pipe-smoking ivory-tower intellectual becomes the spokesman for the anti-sports movement, it will have a tough job on its hands.

My brother has two teenage kids who are going very far in sports, and—in a departure from the almost rabid sports parents around him—he has mixed feelings about their full schedule of practices, games, tournaments, and other commitments required of his family. Though he is an expert cyclist, and was a very successful competitive swimmer in high school and college, he takes a guarded approach to the lionization of high school athletes, his kids included.

I chatted with Bryan about this awhile back, and am providing here an edited transcript (with his comments in blue, mine in black) is a nice jumping-off point for further exploration of the topic.

: We’ve got that Lego Mindstorms set but none of my kids has ever really shown much interest. They’d rather be has-beens, lounging around the T.V. watching sports, talking about their glory days playing high school ball. 20 year old John. 30 year old John. Old mean-old-man John. Man, do I sound bitter or what?

DANA: Well, a has-been is better than a would-have-wanted-to-have-been….

Why does everyone admire the athletes so much? I don't quite get it... I guess everyone just wants to be beautiful. I suppose that if we were hanging around chess competitions, they’d be admiring the “smart” guys.

I’ve never questioned the universal admiration of athletes. They’re fearless, and they take the human potential to its highest visible level. It’s harder for the average joe to admire a chess player, because for that you need a real understanding of the game. But bike racers duking it out on a climb ... it’s pretty fundamental, a perfect depiction of Man Against Man and Man Against Nature. We see them doing something we’re afraid to do, and they’re doing it brilliantly. (Beauty doesn’t hurt, of course—it’s inspiring to see a perfectly toned human physique—but it’s not the point. Ugly athletes can be impressive, too.)

But of what value is [athletics], really? In life.

Well, what better symbol can you imagine for the ability to improve yourself? Athletes inspire us to be better at whatever we do. Seeing an athlete at the top of his or her game, well, it’s discipline incarnate. And the psychological aspect of sport is universal. We watch a tennis player struggling to keep his head together, and we’re inspired to try harder next time we’re about to lose it in, say, an annoying conference call.

Sport is good practice for life. When, as happens once in a great while, a guy provokes me on a bike ride, and I crush him utterly, meting out terrible suffering from my spiteful impulsive side, coming as close to brilliance as I can, why, that steels me for battling the insurance adjuster on the phone later. And seeing the pros do their thing, it’s like a lesson in perseverance.

So of what value is all this athletics in our own kids’ lives? They’re not going to grow up to be über-atheletes. They’ll just be has-beens. What good did all that swimming do Geoff and me?

I think the beauty of sport is that ultimately the venue doesn’t matter that much. Whether you’re competing for an Olympic spot or mere Mini Zinger glory, the head-to-head contest is the same. When you conquer somebody, especially somebody who usually beats you, there’s a rush that you don’t often get, and it doesn’t matter where you beat him or what “real world” importance the race held. That rush gives you a taste of success, and once you’ve had it, you want it again. I think it’s no coincidence that so many athletes are successful beyond their sporting careers.

Yeah, that’s true, I reckon... I just hope [my kids] can keep it all in perspective when they grow up and it’s not there anymore.

Well, if a person has strong character, than “it” will always be there. Sure, you see plenty of pro athletes who get a grossly inflated sense of self, and then have a terrible letdown when they’re not playing/racing anymore and nobody cares about them anymore, but sport isn’t completely at fault. The sporting institutions and/or overly awed fans (or in your case the players’ parents) have a role there. Many of these irresponsible athletes are from lousy upbringings, or have been manipulated by the money-driven sports world, but if a person is brought up well, and builds the character necessary to keep everything in perspective, then I think the sports can really be a plus. Look at what’s-his-name, Bill Bradley. A brilliant basketball player who was criticized by his college ball coach mainly for not being selfish enough, and then he goes on to be a successful senator!

I also think sport is a good place to vent our over-competitive impulses. For most of human existence, men waged war against other tribes, etc. and developed all this kill-or-be-killed instinct, and when that’s applied to the modern professional world, it leads to all kinds of excesses, like competing to make more money than the next guy, even though you already have more than you could possibly need. I wonder how many tycoon types could have done without the Gulfstream jet or the yacht if they’d just had a sporting venue in which to get their ya-yas out.

Or for stealing other guys’ women and whatnot.

Yeah, exactly. Meanwhile, nothing relieves my type-AAA personality more than a good hard bike ride, even if I’m solo. Afterward, I’m downright mellow, companionable. Without it, I can be a real jerk, as you well know. It’s so cool being on the bike club because we destroy each other on the road and leave it there. At a bike team BBQ, we can really relax and there’s no pecking-order or one-upmanship BS because every guy has crushed—and been crushed by—every other guy countless times.

The need for balance