From the Archives - Critique of Alexa's Early Art

We got a new fridge. The State of California had a fat rebate set up for purchasers of Energy Star fridges, and that might have been nice except the fridge we needed—short enough to fit under our cabinet—wasn’t on the approved list, though it’s Energy Star certified. There’s a process to add the fridge to the list, but the deadline for doing so preceded the announcement of the rebate itself: a nice Catch-22. So we bought the fridge anyway (our old one was drooling all over our food) and did without a rebate. Thanks for nothing, California!

Part of breaking in a new fridge is, of course, the Kids’ Art Installation. Lindsay had a nice new piece that was too large for the front, so I put it around the side, where it was spattered with spaghetti sauce from the nearby stove until I removed it, and it's now gone missing. D’oh! Here are a couple of the works we have up front now: 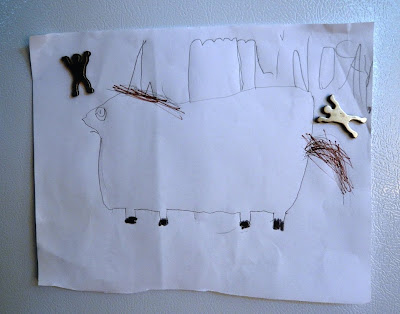 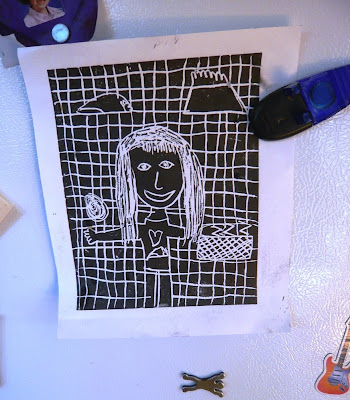 Serving as curator for this new fridge exhibit made me think of Alexa’s very first major work, which she completed at age two. In general the public’s response to this work was positive, but one major critic, my friend Michael, was fairly critical of it. I get that being critical is his job as a critic (albeit an amateur one), but I thought he missed some of the artistic nuances of the work. What follows is his critique, and also my response, which ended up blossoming into a full-fledged exegesis of Alexa’s drawing and her artistic sensibility in general. 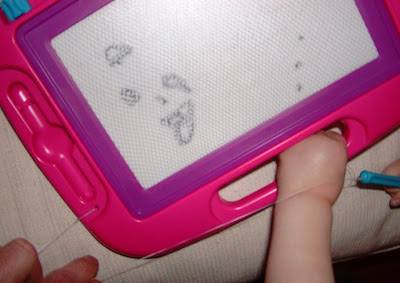 I think the use of color needs development. Form and style are good but the inclination toward avant is so euro-yesterday. i'm impressed with the texture--the play toward the pixelization look--but feel the minimalist approach is just not in tune with contemporary artistic values. in essence, the artist appears immature in her approach and execution; however, there are some encouraging attributes warranting encouragement.

Your analysis is generally quite valid, but if I may say, you fail to fully consider the context in which we should view this work. Sure, if you came upon it in a gallery, little more could really be said about the fresh young talent who created it. But naturally there is a school of art criticism that goes beyond the surface and considers the context, the background, the circumstantial and sociological texture, if you will, of the art and its artist. From this perspective, the work embodies much more than a quick glance can appreciate.

Young Albert is making grand statements with this early piece. Certainly there is a brashness here, some would even say an insolence or iconoclasm, given the relative lack of education of the artist, in this case a relative autodidact who has never apprenticed to a master and frankly ignores, or even denies, contemporary or historical influences. And yet the treatment of subject here is, above all else, ironic, and throws a harsh light on the current art scene and, indeed, the current psychological and emotional landscape of our time.

You mention the sparse use of color: exactly her point. Her choice of medium, and her truncated palette within that medium, are the equivalent of making an expensive color photocopy of a black-and-white original. (An architecture student I know once played with this as well.) And though you seem to appreciate her experiments in pixilation, perhaps you haven’t fully realized the depth of her statement: she had to know that her picture, coarsely drawn though it is, would be captured with a 2.1 megapixel digital camera. She’s actually bridging the pointillism school (exemplified by Georges Seurat and his followers in late 19th-century France) to the present, invoking the oil-and-water clash between warm French beauty and cold American technology.

Certainly it could be said that young Albert should master the technical aspects of her craft before embarking on grand statements. After all, Picasso almost certainly could have painted in the soulless but technically adept Norman Rockwell style before moving on to the experimentation that become Cubism. One could accuse Albert of not actually recognizing that the nose is between the two eyes and not off to one side, challenging the idea that she is deliberately skewing the loci as did her famous predecessor. But that would be false: she has been able to identify the nose, her own or another person’s, for well over a year, and always points to the right place. (Indeed, the work in question shows a strong command of locus, even if the nose itself is lacking in definition.)

Can’t we forgive Albert’s refusal to get bogged down in technical skill-building when she has so much bottled up, that yearns for alternative modes of expression? This is a person whose entire life has taken place post-9/11. She has never known a government that wasn’t steeped in cynicism and at odds with its society. This is a sensitive soul whose first exposure to mass media included the Teletubbies, those uncanny, unsettling, inexplicable creatures that exist as if to fly in the face of decent artistic temperaments. Sure, Albert’s work may be titled “Happy Face,” but it cannot be an accident that the face is sticking its tongue out at the viewer, as if to say, “I see your cracked polystyrene world and I raise you one flip gesture.”

You charge that the work is avant and euro-yesterday? Exactly Albert’s point: a half-rhetorical question, “Wouldn’t it be nice to revert to an earlier time, and a less crapola culture?” And her refusal to sync up with contemporary artistic values is, above all, an attempt to put the kibosh on our entire shattered American era, art and all, since she can’t cherry-pick what beauty still remains.

Of course it’s still irresponsible and myopic to say she has no influences. Her parents, totally unrecognized by the contemporary art world and for good reason, have taught her every poor technique in the book, and make matters worse by choosing uninspired subject matters for their own art: cats, babies, simple geometric forms that are easy for the untalented to draw. This early exposure has combined with young Albert’s emotional and intellectual underpinnings to establish backlash as a fundamental—if not the fundamental—basis of her oeuvre. Consider the haphazard geometry of “Happy Face.” A slap in the face of realism? Or a realistic representation of a face that’s been slapped? That eye on the right: is it crying? Or does it have an “owie”? (Could it even be based on Albert’s growing understanding that her sister was born with a cataract?) Moving across the (virtual) canvas, we see an irregular form above the eye on the left. A cloud? A hematoma? Why should an ostensibly happy face cause us to ponder such questions?

The answer can, arguably, be given in two words: Thomas Kinkade. Yes, as if Albert’s worldview wasn’t tainted enough by 9/11 and the Teletubbies, she was also exposed to a Kinkade “painting,” reproduced in an advertisement (for Kinkade-branded merchandise) in “Parade” magazine, irresponsibly left around the house with no regard for the possibility of this impressionable young artist seeing it. It is entirely possible—and hideous to contemplate—that Albert is unaware of the almost universal disdain for Kinkade; after all, no two-year-old can be expected to have followed what criticism the art world has bothered to throw in Kinkade’s direction. How could she feel anything but disgust for her fellow man, believing that Kinkade is not just a commercial but a critical success?

We could well expect a less cynical approach were Albert to have read Joan Didion’s latest book, Where I Was From, in which Didion snarls that Kinkade’s “paintings” are “of such insistent coziness as to seem actually sinister, suggestive of a trap designed to attract Hansel and Gretel.” (A perfectly appropriate analogy in this case, as young Albert possesses the juicy, sausage-like calves that to a bloodlusting witch would make Hansel and Gretel look, in comparison, like dried-out jerky.) Given this strong dose of grotesquery, and the idea that Kincade is accepted by the art world, any artistic sentiment could be expected to turn immediately to bold, raw, intentionally non-cozy images. Built atop Albert’s other influences, this Kinkade exposure may indeed have been the straw that broke the camel’s back and sent her fleeing to an artistic realm that William Blake might have inhabited had he been painting two centuries later and for “Mad” magazine.

Of course, after such contextual flights of fancy, we must always return to the work itself. And there is certainly room for growth, for maturity, for greater depth in Albert’s work. But if you’d viewed it as the artist had intended—for just a few seconds, before it was wiped out by magnetic eraser wielded by the artist herself—you’d have a better sense for its transitional, flash-of-consciousness intent, its post-MTV artistic-pulse sensibility. By photographing it, I have falsely imbued it with an intellectual permanence, and invitation for study, that were not mine to give. Young Albert is a highly experimental artist-in-transition, and only when she turns her full attention to other media—crayon, ink, clay, paint, motion-picture, holographs, mindoplastiform—will she offer us the kind of craft we can endlessly explore, that will give the true measure of her talent and ambition. dana albert blog