We’ve had some real weather in the area lately, including a crazy thunderstorm last Friday. This post concerns weather, weather forecasts, and that amazing winter storm. Guest commentary is provided by my daughter Alexa.

If I were marketing The Weather, I’d tout it as “’s favorite conversational topic!” It’s hard to go wrong with it—who doesn’t care about the weather?—unless it strays into political territory (e.g., climate change). There’s little risk, when discussing weather, that you’ll broach the other forbidden topics, sex and religion. But it has often occurred to me that discussing the weather can be a little awkward because it’s such an obviously safe topic for light conversation. Bringing it up can suggest you’re deliberately tiptoeing around some taboo subject.

I was very glad about this last storm, because the narrow range of weather in this area has become my latest source of parental guilt. Where my family lives we almost never get a proper thunderstorm, and certainly never the thrill of waking up to see the whole neighborhood buried in fresh snow. If the American Dream is to give your kids more than you had, I’m letting my daughters down, because growing up in I enjoyed a great many summer thunderstorms and overnight snowfall.

Forecasting the weather must be a really easy job. Not that it isn’t complicated, of course, but the customer has no recourse when the forecast is wrong—which it so frequently is. Weather.com forecasts the temperature hour by hour, but every single morning when I check the temperature (on their website) it’s a few degrees cooler than they said it would be. If all they did for a forecast was to measure the temperature once per hour and use these values as their predictions for the next several weeks, they’d do a better job.

Do weather forecasters use a Ouija board? I suspect not. They probably just steal their weather information from somebody else. After all, who could possibly catch them in the act? Meteorology seems pretty precise, especially with the satellite images we all nod at on TV or online, but of course we’re not really capable of extracting meaning from the images. They’re just something for the weatherman to gesture at.

Twice this year my family has made bold outings in defiance of the forecasts. A few weeks ago we took a two-day trip to hang out on the beaches south of here, despite an emphatic prediction of nothing but rain for both days. Here’s what we got: 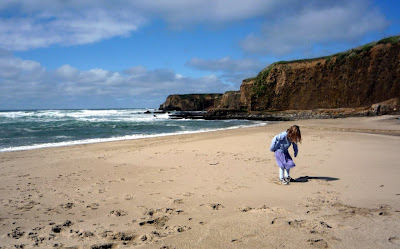 The other trip was to ski up near . The forecast for Sunday was rain all day, which of course would have made for lousy skiing. Instead, it only snowed a bit, and we enjoyed sparsely populated slopes and no lift lines. 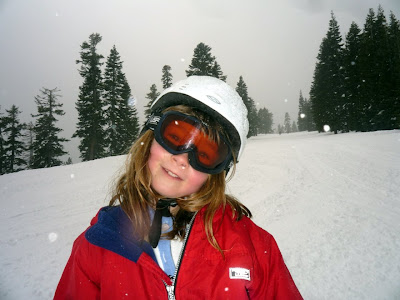 Even the basic weather forecasting terminology is a bit of a farce. The weatherman loves to talk about “high pressure systems,” which we all studied and halfway grasped in junior high, but it’s basically a throwaway phrase. Even the difference between “rain” and “showers” is a bit of a mystery. My wife asked me about this this morning I replied, “A shower is when water falls from the sky—in fact, when water actually rains down on you from the sky—but it isn’t actually rain.”

The weather forecast in the UC Santa Barbara student paper, the Daily Nexus, was never wrong. This wasn’t because the weather down there was totally predictable (though it was), but because the person who did the weather section never so much as mentioned the weather. The “forecast” was more like a snapshot of whatever was on the person’s mind. I see that the format hasn’t changed: 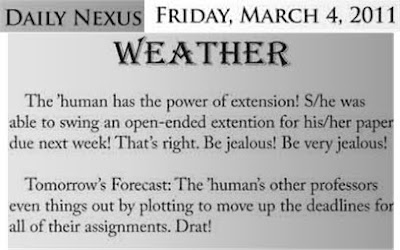 Back in the day, these “forecasts” were much wittier than this, and I don’t remember seeing typos. Or am I just becoming bitter as I age?

The big storm I mentioned earlier happened when my family was at Movie Night at the elementary school. Though there had been rain on and off during the day, the sky had cleared up by evening and we didn’t expect much more rain. We’d have walked to the school but we were running late. We wore light jackets and normal shoes.

At a fundraising auction I’d won the VIP Movie Night Extravaganza Package, meaning my kids got to bring a friend “for free,” and we got special seating, and got to come in through an exclusive side door, were given a big bucket of candy, and got a whole pizza instead of just buying slices à la carte. We even got wine masquerading as juice boxes. No, none of this has anything to do with the storm. I’m just bragging.

So I sat there with an entire pizze box on my lap, feeling like royalty, the kids distracted by candy, watching "Willy Wonka and the Chocolate Factory," a movie that had terrified me as a kid. Occasionally a younger child would start bawling or try to flee the place, which gave me a strange satisfaction that the world hasn’t really changed. Soon I became drowsy as the starchy pizza crust worked its magic. During the scene where a chocolate bar, and then Mike Teavee, are turned into TV signals, all the characters are dressed in white suits from head to toe (like in Intel ads), and my foggy brain began making incongruous connections with the scene in Woody Allen’s “Everything You Always Wanted to Know About Sex *But Were Afraid To Ask” where a bunch of spermatozoa, also dressed in white from head to toe, prepare for their kamikaze one-way journey. The mental pairing must have been too much for my brain because the next thing I knew, I awoke with a sore neck to the sound of thunder outside. The movie was winding down but a storm was gathering momentum.

As soon as the movie ended, lots of kids ran to the doorway to watch. The thunder had been getting progressively louder during the film and we had been catching flashes of lightning through the windows. As my daughter Alexa recounted, “All of the kids started screaming when there was thunder and it was shocking how loud it was. I [once] went to a drum performance and they had an eight-hundred pound drum but the thunder was louder. The lightning lit up the sky and the scary part was the fact that it could have hit us.” (The day after the storm I asked Alexa to write down her recollections so I could quote from them, which is why I have this verbatim.)

Right as we came out the door and were standing under the overhang of the roof, it started pounding down hail. This hail persisted and began to accumulate in vast amounts like shag carpet over the playground. Alexa recalls, “The hail was almost the size of marbles and the ground was completely covered with a sheet of it. There was so much hail on the ground that it looked like snow.” Dozens of kids just stood there staring.

Then came a thunderclap of proportions. Instead of just a rumble, it was a boom you could almost feel, coupled with a distinct CRACK! sound. My younger daughter, Lindsay, shrieked and jumped up into my arms. I carried her back into the school auditorium where she began wriggling in my arms, trying to break free. Was I too close to the door? Did she want to crawl under something? No, she ran right back outside to watch some more!

I figured it was only a matter of time before the first kid ran out into the playground and started dancing around in the ankle-deep hail. No more hail was falling but frigid rain was still hammering down, and for at least a couple minutes nobody moved. But then, sure enough, some kid ran out there, and then everybody followed, shrieking and dancing around and making snowballs out of the hail to hurl at each other. “The hail was like quicksand,” Alexa recounted, “a layer of ice floating on top of water.” Lindsay ran back to me and gave me her popcorn, to free up her hands, so I had a snack for the second show.

Eventually the adults got tired of being beaten by giant icy raindrops and we started for home. We’d had to park several blocks from the school and the sidewalks were completely flooded. In Alexa’s words, “As the hail melted, rivers of water ran across the ice.” The water gushed along, running over the tops of our shoes. The rain reactivated my hair gel. Our thin jackets were soaked through. We got to the car. The hail had turned to a soggy mush of snow, like if Kix cereal were left in milk too long, so my wife had me drive. (As a teenager, most of the driving I did was in the snow, just for fun. My brother Bryan and our friends and I practiced power-slides, parking-brake slides, and doughnuts in a parking lot until we were skilled enough to take our chances in ’s nicer neighborhoods, fishtailing with great aplomb, doing 180-degree skid turns around medians and such. Now, having become a responsible adult while maintaining my slippery-driving skills and relative sang-froid, I’m the family’s designated snow driver.)

It took several minutes for the windshield defogger to clear things up enough to even see. The windshield wipers were working overtime, pushing piles of sleety snow, or snowy sleet, out of the way. I gave the car a little extra gas pulling away from the curb to test the slipperiness of the roads. The car squirmed around a bit before straightening out: the roads were perfect for snow tricks (and skeetching, if the kids here knew anything about that). But, I restrained myself and drove carefully. The kids were delighted to watch giant congealed raindrops hitting the moonroof. The white road had sections of brilliant color: the hail had driven thousands of non-dead (undead? living?) leaves from the trees and they carpeted the snowslush.

We got to our house and the low point of the property down at the street intersection was completely flooded. It was a lake. Alexa begged me to find her a ruler, and while I raked masses of leaves from the drain grate, she measured the depth. (“The water was 5 inches deep in the shallow end,” she wrote later.) When I finished clearing the leaves from the street drain, water whooshed into it like a fire hydrant.

I wish I had some. It was dark. It was wet. I don’t bring a camera to the movies, and after the flood measurements and abatement we were pretty busy with hot baths, pajamas, and the debriefing and calming down operations. Oh well. If a picture is worth a thousand words, perhaps this post is worth 1.8 pictures.