I think a lot of people are relieved to have the election over. Personally, I won’t miss all the campaign signs stuck in people’s yards. I’m not exactly against this practice—in fact, I had a sign in my own yard this year—but I’m not exactly for it, either.

Why campaign signs are a problem

First of all, I never quite understood the point of these signs. How, exactly, do they promote the candidate or ballot proposition? My kids asked me this question and I had trouble answering. (When I can’t explain something to my kids, that’s often a sign that it doesn’t actually make sense.)

Sure, there’s name recognition. But how principled is that? I remember seeing Chevy’s win “Best Mexican restaurant in SF” in a local newspaper, which shows only that a lot of voters who don’t eat Mexican food just wrote down whatever name popped into their heads. Is this really how we want to elect candidates for local office? Shouldn’t we be voting based on ideology and competence, not mere recognition?


I can’t very well tell my kids that the signs work the same way Coca-Cola billboards do, because then my kids would challenge me on the sign in our own yard. I’ve taught my kids, by example and through lectures, to boycott any product that advertises heavily. Why? Well, I hate ads. I find them obtrusive, and worse. When I drink a Coke, I think about how little the product costs to make, and yet how much the Coca-Cola company spends on advertising (close to $3 billion a year). That means that most of what I spent on my Coke is going toward ads to sell more of it, not just to skinny cyclists like me who need it, but also to sedentary kids who don’t. So I’m helping pay for a public health problem.

Getting back to campaign signs: my wife has pointed out that the willingness of homeowners to put these signs out shows that the candidate is well-connected and well-regarded in the community. A fair point. On the other hand, signs cost money, so the rampant signage in local campaigns starts to look like the greater arms race of the national elections, where the best-financed candidates often have an unfair advantage.

Some of the signs have slogans or very, very brief arguments on them. This makes some sense; the phrase “Endorsed by Sierra Club” does, I think, say something meaningful about a candidate. But other times these brief arguments are just blather. It’s hard to be articulate on a sign people see only in passing. It’s the same way with t-shirts and bumper stickers. “Obama 2012” is a simple enough message on a bumper sticker (though it’s a bit redundant when stuck on a Prius in Albany). Similarly, “I’m With Stupid” is easy to read on a person’s t-shirt, but we often miss the longer message on her husband’s shirt (usually something like, “The statement on my wife’s shirt is meant ironically, as a subtle dig at the hackneyed and vapid messaging of tourist trap souvenir merchandise. She actually respects my intelligence”).

Another problem I have with campaign signs is that they might influence voters in ways the candidate didn’t expect. What if the house and yard, not to mention the homeowners themselves, unknowingly reflect badly on the candidate? For example, my lawn is dead, and has three jack-o-lanterns rotting in it. Is that what my candidate would have chosen for a backdrop? 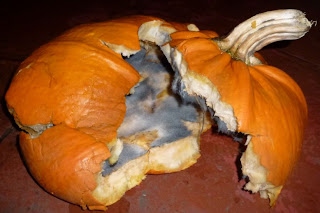 It’s not just the lawn either. My car, parked right out front, is a big gas-guzzler by Albany standards, and is usually covered with guano splotches from the birds roosting in our trees. Worst of all, I often play loud music while working on my bike in the driveway. What does it say about a candidate when you walk by his supporter’s house, see the candidate’s name on the sign out front, and then hear some rocker yelling “Love is a four-letter word never spoken here!”? I doubt my candidate knows about, or would approve, this message.

You might think I’m just joking around, and of course I am, but I’m also serious. What if a candidate gets a sign in somebody’s yard, and then that somebody also posts a sign supporting a ballot proposition which the candidate opposes? (An example would be a candidate endorsed by the Sierra Club whose sign shares a lawn with a sign supporting Proposition A1, which the Sierra Club didn’t support and, some say, should have actively opposed.) Such a juxtaposition could get awkward if the candidate notices it, or detrimental to his cause if he doesn’t.

My final issue with campaign signs is that they tend to beget more signs. No sooner did our candidate’s sign go up then two other candidates, one of whom I’d never met, asked if they, too, could put signs in our yard. Well, given that they’re running against my candidate, might not this cause a conflict in some cases? Sure, voters get to choose three candidates for City Council, but what if two, or all three, of these candidates disagree with one another? How many messaging collisions can one lawn stand?

Meanwhile, the more signs one candidate has, the more the others have to have, and pretty soon there are signs everywhere. Not just on the main streets, but throughout the neighborhoods. On Election Day I went out for a bike ride and was hoping to put worldly cares behind me, but there were dozens of signs at the Marin Circle fountain, signs on Spruce Street, signs on Wildcat Canyon Road, and—I kid you not—a guy biking up Claremont Ave with a big campaign sign attached to his bike frame. (Was the sign on his bike full time, or did he attach it and hit the road to try to capture the elusive but important cyclist vote?)

It seemed I couldn’t escape. When I passed Marin Circle again on my way home, a dozen or so volunteers were standing there waving signs around. A harmless spectacle, but a bit over the top. I thought of telling them, “If you were dressed up like alligators or bears or something, I’d vote for your candidate.” To me, the election itself is very important but all these signs are just a distraction.

The alternative to campaign signs

I can begin to understand the difficulty of trying to campaign for local office. I don’t think these candidates get any TV time (though I can’t confirm this, lacking TV service in my home). The candidates do have highly informative websites, and our local online newspaper did a few features on the candidates’ positions (like this one). But realistically, we’re Californians—we almost don’t have time for instant gratification—and we can’t be expected to do any research. I think we can be counted on to read the brief statement in the voter guide, but that’s really too little, too late.

I guess that’s why signs are so popular: voters don’t have to seek them out, and they match our attention spans. But as I’ve said, they don’t tell us nearly enough. So what’s the solution?

Believe it or not, I have one, and I think it’ll work. My proposal is a simple matter of retooling the template for the voter guide statement, to give these statements the extra oomph they need.

I got my idea from the statements of support and opposition for the ballot propositions. It’s a nice debate, in literary form. I love the idea of a campaign hinging on the quality of the prose that the candidate can create. (Actually, in a perfect world, these statements would be in sonnet form, with copious footnotes, to showcase the candidate’s intellectual mettle.) You get one shot at convincing the voters … don’t blow it. 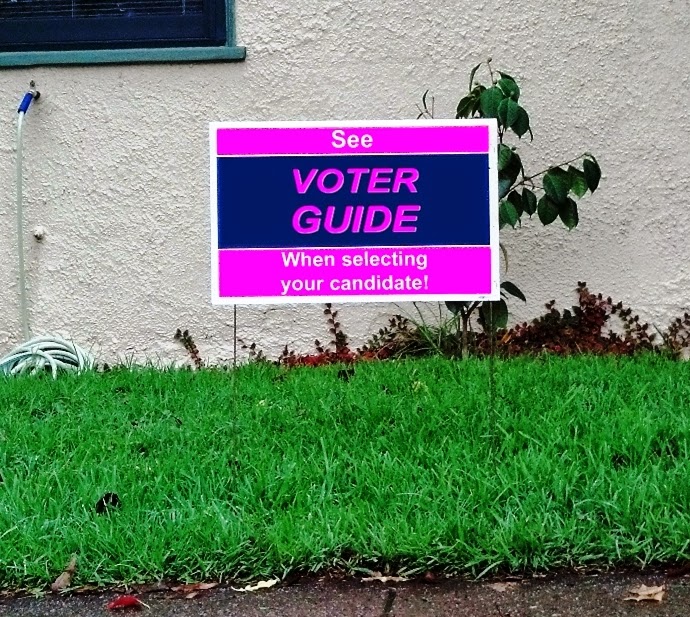 So, instead of a general paragraph from the candidate that simply states what kinds of issues he or she is interested in and what he or she supports, the first section of the candidate statement would be an essay answering a basic question: what is your dream legislation? In other words, if you could push through any new law you wanted, what would it be? The answer to this question would get to the core of each candidate’s values.

Here’s an example:  “My dream legislation would be this:  automakers selling to this market would be required to install special switches in car horns that would cause the airbag to deploy if the horn is held down for more than two seconds.”

Here’s another:  “I would push through an annual ‘Composting Holiday.’  One day a year, residents would be allowed to throw their compost in the garbage pail like they used to, guilt-free.  This would raise awareness for composting while giving everybody a much-needed break.”

And:  “To make bicycling safer for everyone, riding with headphones would be against the law, punishable by having the police officer smash your MP3 player with his nightstick while you watch.”

A final example:  “I would introduce a ‘Teen Texting Tariff.’  Cell-provider accounting relays would count every cell phone text message sent by every teenager.  Each text would ‘cost’ one minute of community service.  Twice per year, teenagers would report for their work detail, which would consist of something like cleaning up a park or building a community garden.  These would be phone-free events where teens could commiserate, non-virtually, while giving back to the community they have so abused by being rude, pithed, glazed-over phone-zombies 24x7.”

The other change to the voter guide statements would be the introduction of formalized attacks, like the attack ads that are so successful in the national elections.  I know this sounds a bit nutty, but consider for a moment that an attack ad says as much about the attacker as it does about his target.

For example, during the very first election I was old enough to vote in, I remember George H.W. Bush calling Michael Dukakis a “tax-and-spend liberal.”  I was puzzled, thinking, “That’s so weird.  Bush says that like it’s a bad thing.”

Attack ads might be tricky for Albany city council candidates, since their ideologies don’t actually vary that much. It’s not like in this last go-round we had a candidate saying, “I just moved here from Houston, where things are done right, and I’m gonna turn this backwards town around!” But I’m sure there are ways for our best and brightest to find fault. Since I don’t have any dirt on our actual candidates from this last election, I’ll provide examples of how they might have attacked me, had I been running against them.

For starters: “Albert can’t even get his kids to school on time. I often see him racing down the sidewalk with his daughter on his bike, after the bell has rung, and she’s begging him to go faster. If he can’t manage this simple task on his own kid’s behalf, how is he going to be effective in government?”

Or: “Sources close to Albert have told me that he often flips through his wife’s ‘Victoria’s Secret’ and ‘Anthropologie’ catalogs, even though there’s nothing in them that he could possibly buy. I think we all know what he’s looking at, and it’s not the sizing charts!”

Perhaps: “Sources close to Albert have told me he sometimes throws used tea bags right into the trash can. And yet he claims to support composting!”

A final example: “Albert is completely out of touch with this community. While everybody else was celebrating the Giants’ victory in the World Series, he was barely aware of it. I mentioned it to him and he said, ‘Um, yeah, that was great. We beat the Houston Oilers, right?’”

So there you have it. If I had to sum up my strategy in a blurb that would fit on a campaign sign, I guess I’d put it this way: “The pen is mightier than the sign.” But you won’t find that message in anybody’s yard in 2014.