When I was a college kid I wrote essays, much like the posts on this blog, and mailed photocopies to family and friends.  (Did all that writing practice help?  Well, as you’ll see below, I once had an addiction to m-dashes—the long horizontal bars that set off clauses like this one—and over the years I have gradually learned how to use these m-dashes more responsibly.  So that’s something.)

I spent my freshman and sophomore years at UC Santa Barbara, and wrote a multi-part guide on How To Be a UCSB Student.  Chapter Three was “Taking Final Exams.”  Since Dead Week at UCSB starts next week, and final exams the week after, I think this is a good time to post these basic instructions.  (Needless to say, this is a humor piece, not an actual guide, so the target audience is anybody who ever went to college, plus anybody who hasn’t and wonders what college is like.)

Part One:  Organizing your Exams

Organize your exam schedule when you sign up for classes before the quarter starts.  The Schedule of Classes lists the exam time for every class; sign up carefully so that you never have two finals in one day.

Often, you won’t get one (or any) of your classes, and you must enter the Schedule Adjustment arena and fight for anything you can get.  Since you usually end settling for classes like Immunology or Twelfth Century Bulgarian Studies just to keep your status as a full‑time student, it actually isn’t very likely that you’ll be able to select your classes with the above guideline in mind.  You may well end up with all your hardest exams on the same day.  This is normal.

Preparation for final exams actually starts during the first week of the quarter.   I know, that sounds early, but to be properly prepared, you must begin blowing off school early in the first week, and stick with your neglect until a week before finals.  Otherwise, you’ll be hopelessly unprepared for Dead Week, because impending doom won’t hang over you like a dark cloud.  To get that week‑long adrenaline rush you must be well behind in all your classes.

If there is any reading assigned during the quarter, it can be done during the last weekend before Dead Week.  If you read it before then, you will forget everything and have to reread it all anyway, so save yourself the trouble.  (Actually, you’ll probably forget it all before the test anyway, so don’t even buy your textbooks.  That can save you precious time, and precious money, as the average cost of a UCSB textbook is $140.)

Dead Week is the week right before Finals, during which teachers are not to assign any homework or give any tests.  French teachers always give a unit test during Dead Week, English teachers always assign a major paper, and routine assignments are never cancelled.  So why is it called Dead Week?  Well, after you stay up past midnight every day of the week, cancel all your appointments (including meals), and read 4,000 pages per day, you’ll know why.

Dead Week is a very good time to find out exactly what classes you are signed up for.  Nothing is worse than finding out you’re enrolled in a Third World Studies course two days before the exam.  Check into that now, or you might have to cram during Finals Week.

Part Four:  Staking Your Claim in the Library

Many students forget, during the quarter, that the library exists.  However, word travels fast and from Dead Week on, everybody will be fighting for a spot as it literally reaches maximum capacity.

The first indicator of Finals will be the 4.5 billion bikes parked out front.  If you work at a bike shop, a few strategically thrown hand grenades will double business for at least a month.  If you’ve come to study, though, you’ll need to find a place to park.  Be VERY CAREFUL walking around the bikes that are leaning on their kickstands.  I’ve seen the “Domino Effect,” and it’s ugly.  Lock everything; many thieves rely on Finals to feed their families—how else can they get every bike on campus in one place at midnight with nobody around to watch?

[Here’s a photo of the bikes parked in front of the UCSB library on a typical day in 1988.  During finals the number of bikes is like double this.] 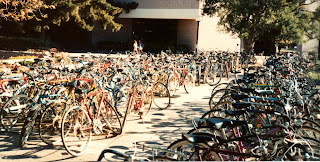 Lining up at the library is a lot like lining up at a rock concert, although I haven’t had to camp out yet.  Show up early, and you may be one of the first to stampede the library looking for a study booth.  Normally, there’s room for everyone, but not during Dead Week—booths that haven’t been used for months will be filled instantly.  Once you have your booth, you must place within it a minimum of $1,000 worth of textbooks and supplies to verify your claim.  Once you have done this, leave.  This will infuriate all who pace the aisles late looking for a seat.

If you must go to class or to the store, leave everything behind.  Otherwise you will never get a booth in the library again—until Finals are over.  Often, your things will be looted.  This is normal.  Having a place to study is usually a  matter of who will risk the most to get it.

After staying up until 2 a.m. all week and still being behind, a student will often ask himself, “Is it worth it?”  The answer is, of course, no.  But that shouldn’t discourage the tenacious student.  If it does, however, he must resort to chemicals to trick his brain into thinking it either likes studying, or will die without it (as is often the case).

Brain Steroids, if used frequently, cause an elongation of the head into, well, an egg‑shape.  Most professional scholars agree that this just isn’t worth it (although you have to wonder how they got to where they are today).  Hence, you should use the next best thing:  No‑Doz.  Don’t worry, it’s as safe as coffee—one tablet is as safe as three pots of coffee.  If you usually sleep nights during the quarter, your tolerance will be low and one tablet a night will be plenty—until the third or fourth night, when your body will need ten to twelve tablets.  You’ll know the drug is working when, fifteen minutes after consumption, you beat your chest and yell, “YEEEEEEEAH!  LET’S GO STUDY!  WOOO‑HOOO!”

Part Six:  Making a Little Money on the Side

Set up a booth in the library selling pencils, index cards, and No‑Doz.  You can sell magazines, too—it’s amazing just how many breaks students take while studying.  And you can sell your booth—ones by the window will get top dollar.  I know a guy who made $300 in one Dead Week.  Of course, he had to drop out of school after that.  Now he’s a millionaire.

Part Seven:  Getting to the Final on Time

Some students believe in locating the testing room beforehand.  People like me know better.  I mean, racing around looking for the testing room, when the exam has already started, will do wonders for your adrenaline.  Besides, it’s not often that you get to walk in late and actually interrupt something!

Above all, don’t panic.  Sure, you’re winging three hour‑long essay questions.  Sure, this test is 80% of your grade and represents the culmination of ten weeks of hard ... okay, ten weeks of neglect.  Sure, you need a perfect score to get an A/B/C/D (choose one) in the course.  Sure, the guy next to you has body odor and is encroaching on your desk ... wait a second, time to panic!

If the proper No‑Doz/adrenaline rush has been achieved, just hold on to your pen and try to keep it on the blue book—responses written on the desk will not be graded.  If you do this right, the pen scribblings from your shaking hand will actually be construed as words by the professor.  He may even like what he thinks you’ve written.

There are two possible scenarios for finishing the test.  You may finish in 45 minutes while everybody else is still writing furiously.  This means your essays were much too vague, and you will do very poorly on the test.  The other scenario involves scribbling like mad all the way through the three hours and beyond—even though everybody else left after 45 minutes.  This means you over-thought the questions and have wasted over two hours of your time.  That’s time that could be devoted to what life’s really about:  hanging out.

Immediately after finishing the exam, you must report to the drug testing booth.  You must show your registration card when you pick up your vial.  When you get into the booth, do not read the “CLEAN CATCH SPECIMEN COLLECTION” instructions listed for the women.  They are disgusting.  If you have been taking No‑Doz or have eaten dorm food within a week, don’t expect to pass the drug test.  In this case, you’ve only brought this problem on yourself.  Take heart; administrators only analyze the doping control results for top 15% of the grade curve, so your sample will likely be thrown out.  And usually, your grade will improve after others are penalized.

You can check your grade by seeing the Teaching Assistant in his office two weeks after the Final.  Of course, nobody in the history of higher education has ever done this.  After despising your T.A. for ten weeks, would you visit him on your own time?  Not a chance.  You can find out your final grade when your report card comes—unless your T.A. forgot to send his grade report to the Registrar, or filled out the form incorrectly.  In this case, you will receive no credit for the class.  This is normal.