This stage play is a work of fiction.  That said, I cannot deny that it was inspired by an actual product.  Also, certain characters herein have broad similarities to individuals who might actually exist, but these are used fictitiously. 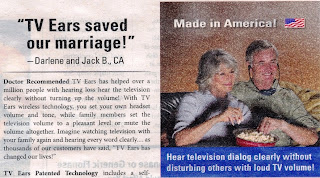 A Play in Two Acts

Scene:  A comfortable, cozy consultation room.  LIZ sits in an armchair.  DARLENE and JACK sit side by side, several feet apart, on a sofa that faces LIZ.  On a side table is a giant box of Kleenex.

[DARLENE clutches a well-worn stuffed bear, a fixture of the office.]

DARLENE:  I just feel like Jack is always lording his supposed superior education over me!  He’s always quoting this or that article from Parade magazine just because he knows I don’t like to read!  [She blows her nose.]  It’s just that I’m more of a visual person.

JACK:  I’m not always reading.  Hey, you know what this reading thing is really about?  I just want to turn on the closed captioning when we watch TV!  Because I can’t understand the dialog!  But she doesn’t like closed captioning.  She says its distracting!

DARLENE:  Well, everybody knows you can’t read and watch TV at the same time!  Unless you’re, like, actually deaf.  Those people have ways of compensating.

LIZ:  I think you both have a point here.  Jack quite reasonably wants to be able to follow the TV program but can’t hear the dialogue.  And Darlene, you’re right that multi-tasking is overrated.  Many studies show it’s actually impossible.  But I’m wondering if there might be some middle ground here?

JACK:  Well, I have this hearing aid, but Darlene won’t let me turn it up!  She’s always telling me to turn it down, even in front of other people, which is just—well, I find it humiliating!  [Leans forward, elbows on his knees, and buries his face in his hands.]

DARLENE:  Well, Jack, like I’ve tried to explain a thousand times, if your hearing wasn’t so bad you would know that your hearing aid makes this high-pitched whine and it really disturbs people!  You embarrass me with it!  [Stares at stuffed bear, then sets it down on the couch, steals a glance at Jack, then faces Liz.]  Liz, I don’t think Jack even respects me and so often I feel like I’m just at the end of my rope!  I don’t see any hope here at all!

LIZ:  Oh, Darlene, I know things can seem hopeless, but they’re really not!  Look, I’ve worked with a lot of couples for years—I mean, I’ve really seen it all—and sometimes things really are irreconcilable.  But in your case, I don’t feel that way at all.  I believe that you and Jack actually have a very strong marriage!  I think you need a few adjustments but you’re actually really close!

JACK:  You really think so?  What makes you say that?

LIZ:  Well for one thing, you both like to watch the same TV programs!  Isn’t that right?

[JACK and DARLENE look at each other.]

LIZ:  Did you know there are lots of couples who can’t even agree on what to watch?  And couples where one person doesn’t even watch TV at all?

JACK:  Is that right?  That’s just … well, that would be so lonely!

LIZ:  You’re right!  Listen, I think there’s a solution here, and it’s actually pretty simple!  I’m going to recommend this product to you that I think will make all the difference.  Have you heard of TV Ears?

[JACK and DARLENE shake their heads.]

LIZ:  TV Ears are a wonderful product that has helped over a million people hear the TV more clearly.  This product uses wireless digital technology that amplifies the TV sound on a per-user basis.  So Jack, you could wear the TV Ears and set the volume exactly where you want it on your TV Ear headset, so you don’t have to turn up the sound!  Darlene can set the TV at a level that is comfortable for her.  With TV Ears it’s really a win-win for your marriage!

JACK:  Gosh.  That sounds intriguing … but also kind of complicated.  Is it some giant apparatus, and will I have to get a new TV?

LIZ:  No, it weighs less than two ounces and will work with any television set!  Not only that, but it has voice clarifying circuitry specifically designed to make the dialogue easier to follow.  And you know what else?  [LIZ lowers her voice to a hush.]  As a certified marriage counselor I can get you a special discount.

DARLENE:  I think this really might be just the thing for us!  Jack, what do you think?

LIZ:  Great!  Now, TV Ears aren’t sold in stores but I’ll order a set for you.  As you’ll recall, I’m on vacation for the next couple of weeks, which should work out just right.  By the time we meet again you’ll have had a chance to try the TV Ears.  And now … I see our time is up for today.

Scene:  LIZ’s consultation room, as before.  Jack and Darlene are on the sofa again, but this time sitting very close together.

JACK:  Liz, you’re a genius!  The TV Ears have made all the difference.  Now that we can get along during our TV time, all our other problems seem to have just melted away!

DARLENE:  It’s true.  Now, instead of fighting at bedtime, we sit up talking well into the night about the show we just watched!

JACK:  I have to admit, I never used to like talking about our TV programs because I was always so lost!  Now TV is like a whole new world for me!  And the TV Ears are so comfortable, I forget I have them on!  And you know what else?  It’s like we’re ... engaging better, with the programs.  It used to be that the TV would just be on, but I wasn’t really even paying attention to it.  I feel like we’re, you know, committing more now.

LIZ:  That’s wonderful!  I could tell just from the way you two are looking at each other that you’ve really turned the corner.  Hearing loss is devastating for couples and families, and nowhere is that more apparent than the TV room.

DARLENE:  It’s funny you should mention families.  TV Ears have helped our grandkids, too!

DARLENE:  Well, my daughter was visiting with her kids, and when we showed her the TV Ears, she got really excited.  She has two small sons, and the younger one, Roger, is a very sensitive child.  Those two kids always fight when they play video games because Clint wants the volume way up, but Roger gets distracted by the sound, and it makes him all flustered and upset.

JACK:  It’s the screaming that gets him.  They love “Grand Theft Auto” but the whores scream a lot when you kill them.  [Grins.]

DARLENE:  So now Clint wears the TV Ears, and Roger turns the TV volume all the way off!  Roger’s scores are much higher now that he can concentrate better, and they have much more fun together.  And even when they’re not playing, I can see the difference.  Roger is less … less sullen now.  My daughter is so relieved!

LIZ:  I’m so happy to hear it!  You see, sometimes there really is a simple solution to what seems like an impossible problem.  I haven’t heard before of the TV Ears helping with children but it makes perfect sense.  [Sighs contentedly.]  I think you two are really on your way, so I’m going to suggest this:  we can stop the scheduled sessions here.  Keep using the TV Ears, and if you feel like everything’s still going well, I think we’re all done!  But if for some reason you two still feel like you’re having problems, you can always schedule another session with me on an as-needed basis.  Does that sound good?

[JACK and LIZ look at each other.]

JACK:  I’m good with that if you are, honey.

DARLENE:  Yes!  I think so!  I’m so much happier now.  Thank you for everything, Liz.  And thank you, TV Ears!