From the Archives - A New Jacket for Fall!

Maybe you like to shop. Maybe you enjoy retail environments. Well, other than bike shops, I really don’t. When I’m in a clothing store I have this (only somewhat irrational) fear that I’ve drifted into the women’s section without realizing it. At The Gap once I was surveying a dizzying array of jeans, folded on endless shelves, and a salesman came up and said brightly, “Hi there! Would you like to buy some women’s jeans?”

So, when I have a positive retail experience, it’s kind of a big deal. What follows is the story of how, almost eighteen years ago, I bought my beloved “barn jacket,” which I still wear to this day. Of course this post isn’t just about that. I also discuss wool shirts that I wore before anybody else wanted them; the warping of the factory-outlet concept; a wormhole; and the extinction of quality control. 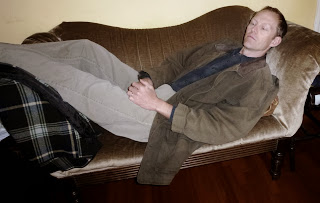 Fall is upon us, and you may be considering a new jacket. So, in the event that you’re interested, you can peruse this spellbinding account of my new jacket purchase.

I really needed a new jacket. My old one, the J Crew Barn Jacket, had served me well but was a bit too small, and was really better suited to Berkeley than to San Francisco. It was just a bit too light for the winters here, and a bit too baggy for cycling in (the wind shoots right up the sleeves). So on a cold, blustery day Erin and I went to the San Francisco Center and poked around.

One of the things I looked at was a large wool Woolrich shirt, just like the ones my brothers and I wore back in high school. I haven’t seen wool shirts like those in a long time.   The only difference between our old wool shirts and these ones was the price. We’d bought them at a Woolrich Factory Outlet in Broomfield, Colorado back when Factory Outlet meant slightly irregular and overstocked stuff stuffed into bins in a giant warehouse, and at really cheap prices (I think we paid like $10 or $12; these were $100 [and now, in 2013, are $295]).  These days, of course, “factory outlet” means nothing more than a company-run store that sells lesser versions of their brand of product, for a price that is supposedly cheaper, but usually not my much. The modern factory outlet store doesn’t seem to have the “seconds” that I like to buy. I could never tell the difference anyway; I’m sure there was something wrong with those Woolrich shirts, but I never could figure out what. I have to wonder: now that factory outlet stores generally sell all first-quality stuff, what do companies do with their seconds? Surely they must have seconds.

After seeing the Woolrich stuff, we went upstairs to J. Crew. For years, J. Crew has considered me a loyal customer. They have faithfully sent me catalogs ever since I moved to the Bay Area (up until our bike tour, when they finally lost my scent). For a time, their catalogs featured extremely attractive models, which I considered an excellent selling point. (Un)fortunately, the women weren’t for sale. The strange thing was, up until very recently, I’d never purchased a J. Crew garment in my life, for reasons of cost. (The aforementioned barn jacket was a gift from my mom.) How I came to start getting their catalog is a mystery to me. I suppose I had walked into their stores a few times; somehow, they must have figured out my address. Maybe they had me followed. I’d been in there a few times with my roommate at the time, Brett, who was in fact a loyal customer. Maybe they heard him say my name, and something in our behavior suggested that we were roommates, and they’ve used postal records to track me from there. Either that, or they bought my name from Banana Republic.

Anyway, during a business trip to Pasadena a few months back, I discovered an amazing J. Crew store. The amazing thing about the store was its wrinkle in the space-time continuum. Or maybe it was a wormhole ... I’m no physicist.  The store, which is quite large to begin with, is in the shape of a giant L, and has the amazing property of instantly transporting you from one part of Pasadena to the other. One moment I’d be out on Colorado Avenue, seemingly miles from the engineering firm where I was doing consulting work, and then I’d walk past the men’s section, through the women’s, and the next thing I knew, I’d be in a little plaza near Il Fornaio, the Italian cafe right across the street from the office. It was like the wardrobe that led to Narnia. Not only was this a handy shortcut, but for weeks I didn’t really know how else to get from one point to the other. (You know: my usual spatial relations problems.) When I did finally figure it out, I still went through J. Crew because it was about 100 degrees outside, and the store was nice and cool.

Well, on one trip through, I happened to notice a pair of cool pants which were on sale. They were about $30, marked down from something like $400 (well, maybe not that much, but something atrocious). From a fiscal standpoint, it would have been folly indeed not to buy them, so I did. Then I looked at the receipt to find out exactly what these pants were: “khaki pant relaxed plain zip.” (The only way to find out the name of a garment is to buy it.) A few days later, again on the way through, I found a really great shirt on sale. This one is called the “tonal plaid shirt.” I don’t know what the name means, but it’s such a subtle plaid, it almost looks like a solid. The color is so dark that the shirt is almost black. The whole effect, in fact, is so low-key that when I wear the shirt, you almost can’t tell who I am. It’s a great shirt for an introvert, and may in fact be the grooviest shirt I own.

Well, my boss was down in Pasadena with me, and when he noticed that I’d made two J. Crew purchases during the course of a week, he made the same mistake that J. Crew had: he assumed that this must be my favorite store. So, one day at lunch, he suggested we go over there. Once there, he presented me with a $100 gift certificate. “Well, I know you love this store,” he said, “so I thought I’d take this opportunity to show my appreciation for your extra work here.” So, to return to my original story (if you haven’t forgotten it by now), I naturally hit upon J. Crew as the obvious place to buy my new jacket: I could buy something overpriced, save $100, and not sweat it.

I found a great jacket right away. It’s huge, and dark, and has a removable wool lining that is fastened to the shell by about 100 buttons, so the jacket doubles as a hobby. It doesn’t have any zippers, just buttons, which is great for me since I have a tendency to jam zippers. What’s more, the shell is a complete garment even without the lining (but not the other way around). It’s the kind of jacket that you don’t put on; you climb into it. Once inside, you can relax your entire upper body and it will support you. You could fall asleep in it without tipping over; it’s the kind of garment you could live in. But the main reason I bought it, besides that I had the $100 gift certificate, is that Erin liked it, and she had been the chief proponent of the new jacket all along.

[In the photo at the top of this post, the jacket’s liner has been removed and is draped over the arm of the couch. And yes, that’s the khaki pant relaxed plain zip, much faded but still in great shape though it’s shrunk less over the years than my butt, mainly due to lack of business travel so they don’t fit so well anymore.  In the photo I’m even wearing the tonal plaid shirt, which is starting to fall apart after hundreds of wearings but is still among my favorite shirts.]

Upon getting home and reviewing the jacket documentation, I finally found out a couple of things that I’d been wondering about for a long time. First of all, I found out the name of my new jacket: the Mule Jacket. So what does that mean? It’s the queerest, most nonsensical name since . . . Barn Jacket. I guess my old jacket made reference to me being a “barn dweller,” while this new one attests to my stubbornness.

The other thing I learned was why factory outlets don’t sell “seconds” anymore. (J. Crew certainly does have factory outlet stores; in fact, upon returning from Pasadena, my boss got on the phone to find out the locations of all of the J. Crew factory outlets in northern California, and prepared a listing for me.) The reason for there being no seconds anymore became obvious when I read the little tagboard card that came with the jacket (and, as I now recall, that came with my khaki pant relaxed plain zip, and even with the tonal plaid shirt):


THIS GARMENT IS PREWASHED.

We’ve put this J. Crew product through a washing process to create a softer, “lived-in” feel and look. This prewashing replicates natural aging without repeated wearings and washings. So this garment is a bit faded, a bit shrunk, and its seams are looser and less uniform (as shrinking is never completely even in all dimensions). There will also be some variations of shading and texture. In fact, some garments will have large bleached patches. Almost invariably, one sleeve will be longer than the other, and the collar may choke you, or else gape wide open and let cold air in. You may find that there are more buttonholes than buttons, and that the fabric may have large runs or tears in it. Some garments will give you years of service, but you shouldn’t be surprised if your garment completely falls apart after just a few short weeks. These factors combine to give this garment its individual look and comfort. Please keep this in mind as you examine your new J. Crew garment: because we don’t want to hear any complaints. Such variations are assets that contribute to the uniqueness and personality of all our prewashed apparel.

Once I’d read this disclaimer, I finally understood that there’s no such thing as a “second” anymore simply because there’s no such thing as quality control anymore. We’re expected to love and accept our garments, regardless of their idiosyncrasies and faults. It’s a beautiful thing.  And the sooner we can give this same consideration to our fellow human beings, the sooner we’ll achieve a gentler, more humane society.
Posted by Dana Albert at 9:28 PM