A couple years ago, I posted a guide, “How to Write a Sonnet,” to albertnet.  I didn’t expect anybody to read it, but it has actually become one of my most popular posts.  When I realized that more people are interested in this obscure activity than I’d thought, I decided to offer a sonnet writing class as a prize for the fundraising auction for my daughter’s school.  I figured if I could get half a dozen people to sign up (and pay the tuition to the PTA) it would be worth giving a class.

Enough people signed up, so I held the class last summer.  Not surprisingly, a few of the registered students flaked, so I had my two daughters attend, to increase the liveliness of our discussions.  I figured if these little kids participated, that might draw out the shyer students.  (I don’t reckon a lot of extroverts go in for sonnet writing.)  This post documents the struggles I had with the class; how I publicly shamed my daughter; and how she had the last laugh.  Much of this tale is told in sonnets, including sonnets from each of my daughters.

I ended up with three adults and one child among the “non-scholarship” students (i.e., besides my daughters).  I transferred most of the contents of my sonnet essay to a flip-chart, which made the lecture really easy to give.  The kid who attended, who must have been forced into it by his mom or dad, didn’t say a word.  He was probably terrified (as I would have been at that age).  But the refreshments were a hit, and everything seemed to go pretty well until the workshop.  We were all supposed to get started writing sonnets.  Nothing lofty, of course; I’d suggested a “Jabberwocky” strategy of writing about any topic or no topic, with lines that didn’t need to make any sense at all.  The idea was to practice iambic pentameter and the ABABCDCDEFEFGG rhyme scheme (click here for details).  Unfortunately, everybody seemed to have writer’s block, at least at first.

As I recall it, the only person who was getting anywhere was my younger daughter, Lindsay.  She is of course well accustomed to asking me for help on her homework, so as she composed a line she would ask me if the meter and rhyme were right.  Before too long she had a pretty good sonnet going: 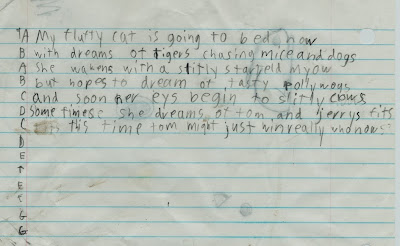 In case that’s a bit hard to make out, here’s what she wrote:

My fluffy cat is going to bed now
With dreams of tigers chasing mice and dogs.
She wakens with a slightly startled meow
But hopes to dream of tasty polliwogs.
And soon her eyes begin to slightly close.
Sometimes she dreams of Tom and Jerry’s fights.
This time Tom might just win; really, who knows?

I thought this was a great start.  The meter was pretty good, and the rhymes perfect, and the content I found charming.  But it didn’t seem to be inspiring anybody.  Oddest of all, my older daughter, Alexa, hadn’t written a thing.

Why did I find this odd?  Well, Alexa has written at least three sonnets (one is included at the end of my how-to post) and has shown remarkable facility.  She was supposed to by my “ringer,” the little kid who made it look easy.  I wondered if perhaps her very success was holding her back.  Had I screwed up and praised her for her earlier work, so now she was afraid of falling from grace?  I couldn’t think of any other explanation.  I asked why she wasn’t writing anything.  “I don’t feel like it,” she replied.

I was beginning to get worried.  I’d budgeted an hour for this workshop.  I felt like if nobody actually wrote anything, I might have to consider whether I’d only imagined the good interaction we’d had during the first part of the class.  (In retrospect I realize that people must have been paying attention because they did well on the quiz.)  I knew it wouldn’t matter that much if the class was a success or not, but I was starting to feel embarrassed.

Hmmm, embarrassment.  This gave me an idea.  I figured there was a pretty good chance I could shame Alexa into writing something.  The question was, if I did this, would I go to Hell for it?  Was this a good trade-off—possibly rescuing myself from embarrassment, but at my daughter’s expense?  How sensitive are pre-teens, anyway?  But deep in my heart I knew that having had this idea, I’d follow through with it.  After all, I’m of the character-building school of parenting.

Of course, there’s a right way and a wrong way to embarrass your kids in front of others.  (Well, actually, I’m sure there are countless wrong ways to do it.)  The best way I could think of, under the circumstances, was to embarrass her through verse.  This was a sonnet class, after all.  I hadn’t planned to write anything myself during the workshop, but desperate times call for desperate measures.

Here’s the partial sonnet I wrote, and then read aloud to the class, in order to lay down the gauntlet for Alexa:

I fear my sonnet class has crashed and burned
Because Alexa has refused to write.
My pedagogic efforts she has spurned,
Her fertile thoughts decaying into blight.
Because she’s had success with this before,
She clearly wants to quit while she’s ahead.
Pretending that this sonnet stuff’s a bore
Assuages a peculiar kind of dread.

This got a good laugh, and poor Alexa got pretty red in the face.  Seeing this, I became nervous.  What would she do now?  If she stormed out of the room, the resulting awkwardness would be pretty much intolerable for everybody.  Suddenly my tactic seemed absurdly foolish and I was kicking myself for taking such a risk.

But Alexa didn’t storm off.  She grabbed a piece of paper and a pencil and started to write.

With Alexa scribbling furiously away, the others perhaps felt inspired because bit by bit students began writing, and reading what they’d written, a few lines at a time.  (Since I didn’t have anybody turn anything in, I’m not able to quote my students’ work.)  Before long, Alexa announced that she was ready to read her sonnet.  Not just the first few lines, but the whole dang thing.  Here’s what she wrote: 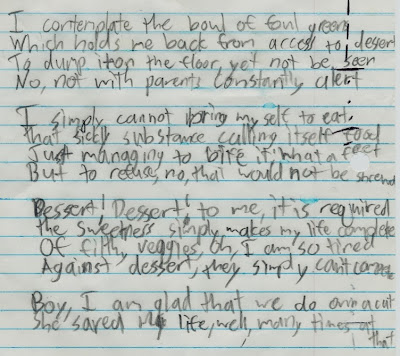 I contemplate the bowl of foul greens
Which holds me back from access to dessert.
To dump them on the floor, yet not be seen...
No, not with parents constantly alert.
I simply cannot bring myself to eat
That sickly substance calling itself food.
Just managing to bite it—what a feat!
But to refuse, no, that would not be shrewd.
Dessert!  Dessert!  To me it is required.
The sweetness simply makes my life complete.
Of filthy veggies, oh, I am so tired;
Against dessert, they simply can’t compete.
Boy, I am glad that we do have a cat
She’s saved my life, well, many times at that.

One of the great things about parenting is how much joy I get from losing to my kids.  That old saying “He who laughs last, laughs best” certainly applies here, but it’s hard to imagine that Alexa’s triumph and satisfaction exceeded my own at that moment.  In fact, I was so moved, I decided to finish my sonnet and chronicle her triumph.  Fortunately, the workshop was getting livelier and I didn’t have a chance until a day or two later.

The rest of my sonnet

Alexa kind of wrote the second half of my sonnet, in the sense that she inspired the content (which for me is generally the hardest part).  Here’s the whole sonnet: 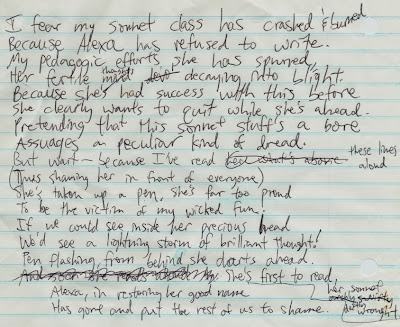 I fear my sonnet class has crashed and burned
Because Alexa has refused to write.
My pedagogic efforts she has spurned,
Her fertile thoughts decaying into blight.
Because she’s had success with this before,
She clearly wants to quit while she’s ahead.
Pretending that this sonnet stuff’s a bore
Assuages a peculiar kind of dread.
But wait—because I’ve read these lines aloud
(Thus shaming her in front of everyone)
She’s taken up a pen.  She’s far too proud
To be the victim of my wicked fun.
If we could see inside that precious head
We’d see a lightning storm of brilliant thought!
Pen flashing, from behind she darts ahead.
She’s first to read, her sonnet deftly wrought.
Alexa, in restoring her good name
Has gone and put the rest of us to shame.

I would like to point out that I did get Alexa’s permission before telling this tale and sharing these sonnets on this blog.  (Lindsay gave me permission too, but asked me to explain that she’s not done with her poem yet.)

If you’re a Bay Area person and would like to take a sonnet-writing class next year, e-mail me and let me know, because I plan to offer this class again at the 2014 school auction.  Who knows, maybe next time I can put Lindsay in the line of fire!

Remember the good start my younger daughter, Lindsay, had on her sonnet?  Well, a week or two before Christmas I suggested that she finish that sonnet as a gift to me.  This she did.  Her sister typed it up for her and helped her print it out.  Here it is now!  (Since her sister chose to leave in the misspellings, I have followed suit.)

And soon her eyes begin to slitly clows
Sometimes she dreams of Tom and Jerry’s fites
This time Tom might just win, really, who nows?
When Jerry leaves he’s covered with cat bites

Not only is she lazy but shes fat,
Our cat is cute thers no dening that.