From the Archives - Going Broke at College

It’s hard to imagine saving for retirement when I have two kids to put through college. The way tuition costs are rising, it seems impossible now for anybody to earn a degree without becoming mired in debt. Gone, it seems, are the days when a kid could scrape by, work summers, and come out of college without a lot of loans to pay off. But some twenty years ago, I myself managed to get my degree without ever getting financial aid or a scholarship. My parents helped, to the tune of $400 a month, but for the most part I was on my own. Looking back, the amounts of money involved in my college education seem now like a joke, but it didn’t feel that way at the time.

So how broke was I? I have a distinct memory of going to an ATM and depositing the last cash I had in my wallet, something like $10, into my checking account to keep a check from bouncing. I had thought that was the worst of it, until I came across this old essay from my archives that shows a low point I must have subconsciously repressed. 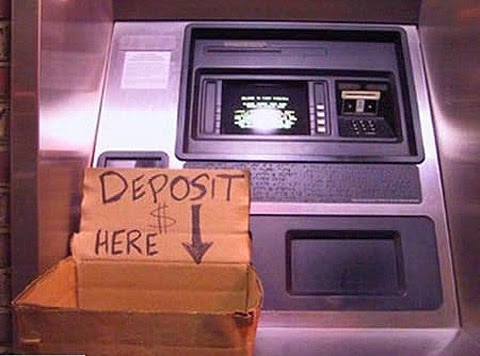 I was leafing through the UCSB school paper, the Daily Nexus, the other day, and spotted an ad offering “FREE MONEY FOR SCHOOL.” Ha! Free money! Seeing this, I recalled how back in high school I’d once pulled a flyer off my mom’s car windshield that said, “Earn X‑tra income! $600‑$1200 per month. Small time commitment!” Short of dealing drugs or selling off body parts, I couldn’t think of how this “X‑tra income” could be possible. I called up the number and said, “Yes, I think I’d like to earn $600‑$1200 X‑tra per month. What do I do?” The operator asked for my name and address. I envisioned a massive mailing list of people labeled not as “homeowners” or “environmentalists,” but “suckers.” It would be the worst possible mailing list you could possibly be on—nothing but the most offensive junk mail on earth. So I refused to surrender my identity: “Well, wait. Before I give you my name, I’d like to know just what line of work this is.” The operator retorted, “I can’t tell you until you give me your name and address. Then I’ll tell you.” I imagined that as soon as she had my address, she would say, “Ha ha, you fool!” and hang up on me, and then sign me up to receive flyers about how to make a fortune breeding penguins in my garage. I asked her, “Is this opportunity to earn an X‑tra $1200 a month drug related?” This really got her riled up. “Now look here, we are a multi-million dollar corporation and are completely legitimate. Just give me your name and address!” Puzzled, I asked, “If you’re such a great company, then why do you recruit your employees by blanketing parking lots with flyers?” She hung up.


I assumed that the ad in the Daily Nexus was a similarly stupid scam, but when I investigated it, it turned out to be a pretty compelling idea: this company helps students get scholarships or financial aid, much of which actually goes unclaimed every year. I’ve been promising myself for months that I would investigate this, so I sent away for this company’s brochure. These guys have a computer program which processes student questionnaires to determine which private sector scholarships a student should apply for. Then, the student applies for these and gets thousands of dollars towards his education. Naturally, there is a fee involved, which is refundable if the student doesn’t end up receiving any aid. I decided I couldn’t really lose, except that I had to have the application in by February 28—and I didn’t have enough in my checking account to cover the $45 fee. But I had two checks to deposit, which I figured would clear quickly. So I went ahead and mailed the check, and then immediately set out to deposit the necessary funds in my account. This meant a trek to the neighboring town of Goleta, which had the closest Wells Fargo Automated Teller Machine.

I always take my road bike to Goleta, because it’s really a dismal ride. Maybe there’s a way to get to El Camino Real without a lot of highways and frontage roads, but I haven’t figured it out. So I’m just duking it out with all these cars, so I want to go as fast as possible … you know, get in, take care of business, and get out before the depression sets in. On this day, I even used my race wheels, since I needed to make sure they were working well for the upcoming weekend’s races. I hate riding on my race wheels, though, because I’m worried about getting a flat. When you ride on $50 Vittoria CX tubular tires, see, you don’t bring a pump or tool kit along; you bring a pocketknife. If you get a flat, you just commit suicide.

At the ATM, I checked my balance before depositing money. I wasn’t worried; I had kept close track of my financial situation, and knew I had a full six dollars in my checking account. (Sadly, the savings account died of malnutrition last month.) The machine casually told me that my balance was at ‑$75.00 (that’s negative seventy five dollars)! My first reaction was denial. No, the machine didn’t just tell me that. No, I have six whole dollars! I canceled the transaction, withdrew my card, put it back in, punched up the balance again, and got the same horrid figure. The second phase of response towards a loss of this kind is anger. Just before I might have ripped the control console out of the wall, the third reaction — severe depression — hit me. How could this have happened?

I immediately deposited two checks--all the money I had in the world—totaling $140, which brought my balance up to a whopping $63.81, according to the ATM. My records, which I still believed were correct, showed that I had $146.40, so now my checkbook has two balances: the actual balance and the theoretical balance. Of course I had to trust the bank’s total, but at least I had enough to cover the $45 check I’d just written.

Unfortunately, the financial aid service ended being a bit of a scam. I got back this massive document listing hundreds of “really good leads,” all of which were based on my dad being a war veteran. I suppose I’d indicated somewhere that he’d been in the Navy, but of course that was an ROTC thing he did for college, and he never actually fought in a war. To get the aid they were talking about, I think he had to have seen combat and had some body part blown off. So there was no way I’d be getting any of that money. But could I get the refund of my $45 fee, since this was obviously a bust? Nope … not unless I sent them proof that I ran down every one of the hundreds of useless leads they’d sent me. (That fine print is a bitch!) So, as broke as I’d been, I was now $45 broker. And it suddenly dawned on me that all my rushing around was a joke, too … surely that February 28 deadline was purely fictitious.

Suddenly it all seemed so futile. College wasn’t working. Back in high school I was smart enough to spot a scam, but now I’d become the kind of chump who throws away $45 when it’s almost three fourths of his entire net worth.

But this story has a happy ending. That thick stack of useless financial aid leads wasn’t all that had arrived in the mail. I also got a check for … well, actually, not a check. A statement. A BA/RC statement, to be precise. Nobody knows what BA/RC stands for, but it should be BA/RF. It’s the quarterly tuition bill from the university: $510.49 in tuition and fees. More money I didn’t have.

I’m sorry, did I say this story has a happy ending? My mistake. What I meant to say is that it has a sad ending: I’m flat broke.