Yes, I Have a Girl’s Name

Curse of the androgynous name

Have a gander at this photo: 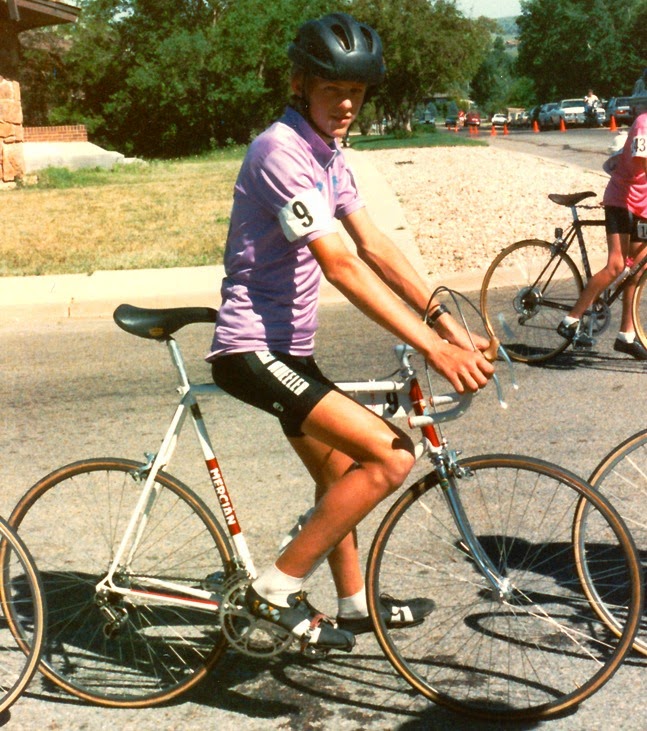 Does that look like a guy, or a chick?  I hope you said “guy,” because that photo is of me, at age 16.  Now, I know I don’t exactly look manly in that photo, but I don’t have a big woman-y butt or anything either.  (In fact I have no butt at all, and scarcely any flesh on my legs.)  This was a few years before I needed to start shaving.

That photo accompanied a story I wrote recently for dailypeloton.com, and it failed to clue the editor in that I’m male.  Why did he need cluing in?  Because I have a girl’s name, of course!  When I looked at the published story online, the mild thrill of seeing my byline was tempered somewhat by the introduction the editor wrote:  “To a teenage Dana Albert nothing could shake her loyalty to her beautiful British Mercian, but there was one exception that still leaves her wondering.” 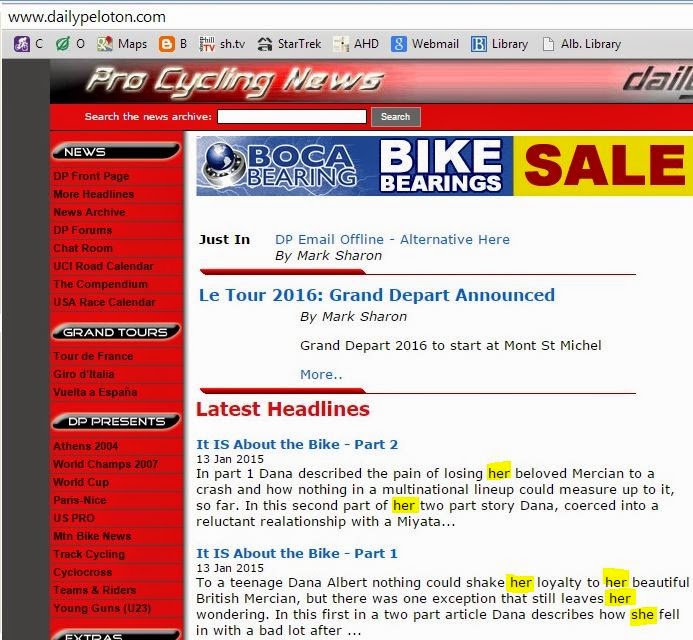 I alerted the editor, and he quickly fixed the story.  He apologized, citing the infrequency of male Danas in England.  He was apparently unaware that it’s an androgynous name, at least in the U.S.  He did not say, “It would have helped if you looked more masculine in that photo.”  But he might as well have.

(I am not going to call Dana a “unisex” name in case there are people who think “unisex” means “has had sex only one time.”  I’m learning that you can never be too careful.)

Is Dana really a girl’s name?

According to Wikipedia, Dana is commonly used in the U.S. with either sex, and moreover, it is now more popular here as a boy’s name than a girl’s.  Somebody should tell that to corporate America.  So often, I’ll introduce myself on a conference call only to have the host say, “Great to have you on the call, David.”  Occasionally I’ll clarify only to have the person try again:  “Darnell?”  In e-mail exchanges, my correspondent will often decide Dana must be my last name.  Sometimes I give up trying to correct people, which is why some work contacts believe my first name is Albert.

There’s a weekly conference call I attend that requires me to give the moderator my name, with spelling.  I say, “Dana … delta, alpha, November, alpha” which should be clear as a bell, but it still trips people up.  On one occasion the moderator responded, “BANA?!”  Apparently she thought “belta” was a word.  I guess that was more credible to her than a guy being named Dana.

My college Latin prof must have thought my name on the roll call was a misprint, and took to calling me “Dale,” which (because of his peculiar accent) he pronounced “Day-oh,” which sounds just like the Latin word “deo,” which means “god.”  I let that one go, all semester.  It wasn’t until the second semester and the new roll sheet that the prof realized his mistake, apologized for calling my by the wrong name for so long, and began using my real name.  I kind of missed “deo,” to be honest.

In high school, I was frequently the first on the roll-call (based on my last name).  Often a teacher would ask in advance for help with pronunciation or a preferred nickname (e.g., “Bob” for “Robert”).  He would call my name right after this preamble, and I would say, “Here, and, uh, it’s actually pronounced DAYYYYYYY-NUUUUH!”  I would say that in as moronic a voice as possible.  (Disclaimer:  this anecdote is told most often by one of my brothers, to the point that I wonder if it’s possibly apocryphal.  Memory can be weird that way.)

My favorite name-related mistake?  When my mom introduced my wife Erin and me to her priest, she got so flustered she transposed our names, so the priest briefly thought I was Aaron and my wife was Dana.  My mom was really embarrassed.  I stuck up for her:  “I’m not so great with names, either.”

Erin, by the way, was not amused when we were discussing names for our (as yet unborn) child, and I proposed “Aaron” for a boy and “Dana” for a girl.  Imagine the fun we could have had with telemarketers!

Is a nickname the answer?

I suppose I could find some non-confusing nickname to go by.  My grandfather had a good, solid male name—Norman—which he and/or his colleagues nevertheless didn’t like, so he went by Al.  Myself, I have a long history with nicknames.  For the first month or two of my life, my parents hadn’t agreed on a name for me, and just called me “the baby.”  As kids, my brothers called me Pain-a, which they shortened to P, which briefly became Pee Wee before morphing into Giwi.  They called me Giwi for years.  (My brother Max, whose first name is actually Chris, was nicknamed “Yo” throughout that time.)

Later on I worked at a bike shop where the owner was also named Dana, and also male.  When a customer phoned asking for Dana, it was impossible to tell which one he or she wanted, so we’d ask, “Dana the man, or Dana the boy?”  So “Dana the boy” became my nickname (with a sly allusion to “Johnny the boy,” an über-evil character in the movie Mad Max).  My other nicknames have included Dane, D’na, Uncle Elmer, Professor, Tech-Nova, Danadrive, Dane-ster, and Dana-star (this last being an accidental corruption of Dana-ster, I believe).

But why should I have to go by a nickname, just because people can’t wrap their brains around my girlish name?  I refuse!

Is there an upside to an androgynous name?

A friend (the one who coined the nickname D’na, in fact) sent me a recent article from the New York Times.  A male reader named Dana wrote to the Times ethicist, wondering if it was ethical to be awarded an internship at a tech company on the basis of having been thought female (since tech firms, he believed, seek to balance the sexes in the male-dominated realm).  The ethicist replied that for these hypothetical employers to guess his sex based on his name was their problem, and anyway Dana was the name the reader had been given so he’s free to use it.

Makes sense, but what about other scenarios?  What if being thought female could be a disadvantage, like if the employer is sexist in the traditional way?  I wonder what opportunities I might have missed out on based on my chick name.  Should I try going by D.P. Albert, following the example of S.E. Hinton, who feared nobody could take seriously her novel about gang violence if they’d known she was a woman?

I guess it depends on what I’m trying to do.  I doubt being female is much of a hindrance in modern publishing, and in fact my name may have helped me get into a very exclusive creative writing class in college.  The professor, Maxine Hong Kingston, was reputed to favor females, though I have no reason to believe this was true (other than having gotten into her class).

My androgynous name did help me recruit students for a bike repair class I hosted as a fund-raiser for my daughter’s school.  To my surprise, almost all my students were female.  Don’t guys want to fix their own bikes?  Or are they unable to admit they don’t know how?  The one male who attended saw all those women and must have been spooked, because he only stayed a little while.  I know for a fact that at least one of my students expected me to be female:  she actually complained about what seemed, to her, a bait-and-switch.  All because my flier at the school auction had my (girlie) name on it.

It is impossible for me to feel sorry for myself whenever my name causes confusion, because I myself am responsible for an egregious error  of my own.  In high school biology class, I had a couple of pals, Bill and Ken.  Early on, Bill heard me refer to Ken as “he” and corrected me:  “Ken is a girl!”  I was surprised, but mainly because Ken is so obviously a boy’s name.  Other than that, the claim didn’t seem so outlandish.  Despite having short hair and a flat chest, Ken did seem rather feminine.  But Ken, for a girl?  Bill insisted this was the case, and so I believed him.  I mean, why would he lie?

So, for months I believed that I’d actually made friends with a girl.  This was a first; normally, at that age, I was so terrified of girls I could barely speak in their presence.  This fear began in junior high, when I somehow fell into conversation with a girl I had a total crush on.  It seemed to be going well, and I got so excited I decided the only thing keeping me from being downright suave was my orthodontic appliance, a big gross thing called a Frankel, which required me to speak through clenched teeth.  This was tricky, especially since the Frankel tended to make me drool, which I was probably doing to begin with because this girl was so cute.  So I decided to ditch the Frankel, as casually as possible.  I discreetly popped open the plastic Frankel case and kind of let the Frankel fall out of my mouth right into it.  The girl recoiled, made a horrible face, and turned away.  She never talked to me again.

And yet, around Ken I was so natural, so relaxed, so … myself!  I realized (erroneously) that it was actually possible to be friends with a girl so long as there was no physical attraction whatsoever.  This might not seem like any big deal until you consider the raging hormones of a teenager.  I was feeling downright sophisticated.

Well, as you can guess, this illusion didn’t hold up forever.  One day, the teacher was having us grade one another’s tests (calling out the right answers while we, disinterested third parties that we were, marked our neighbor’s answers right or wrong).  I was grading Ken’s paper and came upon a grey area.  I raised my hand and said, “She put such-and-such.”  Ken said, “What?!?”  I said, “I said, ‘She put such-and-such,’ which you did—look.”

She—er, he—said, “You said ‘she!’”  To which I replied, innocently, “Well, yeah, of course—you’re a girl!”  Having long believed this to be the case, I said this completely innocently.  Red-faced, Ken said indignantly, “No I’m not, I’m a boy!”  The whole class erupted in laughter.  I was still baffled, and said (with sincere incredulity), “You’ve gotta be kidding me!”  More laughter.  Man, once I realized what was going on, I felt so bad.  Of course our “friend” Bill was laughing hardest of all.

(Did my friendship with Ken survive this humiliating misunderstanding?  Honestly, I can’t recall.  The aftermath is eclipsed by that of a similar gaff.  In chemistry class the next year, I had a friend with a funny surname (Deutschlander) and really bad breath.  One day, when we were doing a lab together, I just couldn’t tolerate his breath anymore, and—thinking I was doing him a favor—drew his attention to it.  The problem was, I was in such a huff I accidentally called him by the secret nickname everybody used behind his back:  Douche-lander.  Between the criticism and the nickname, he was completely offended and never talked to me again.)

In conclusion, when it comes to being mistaken for female, I guess I’d much rather this confusion be based on my name appearing in print, with nothing else to go by.  So far as I know, the people I meet aren’t whispering to each other, “That is the ugliest woman I have ever seen.”
Posted by Dana Albert at 9:52 PM