From the Archives - Flooding

I came across this little story—a true one—very recently. I’d completely forgotten it. This takes place just a few weeks after my wife and I had finished an 8-month bike tour and were living in a tiny apartment in Russian Hill. 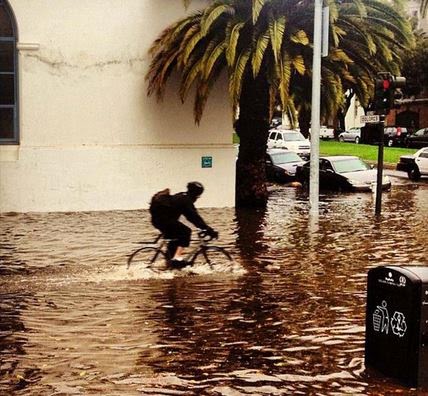 Lots of flooding out here. The other day, at what seemed like a wee hour of the morning, the phone rang. I picked it up, totally groggy: “Hullo?”

“Were you sleeping?” she (whoever she was) asked.

“Oh, no, uh, not really.” Although I still didn’t recognize the voice, I felt that by continuing to throw out stock phrases, I could hold my own long enough to figure out who was on the phone—and whose voice I was supposed to have recognized.

“Well, I knew there was a lot of flooding going on out there, and just wanted to make sure you two were okay.” (Voice notwithstanding, this is exactly the kind of worried check-up call my mother-in-law would make.)

“Yes, we’re both fine. No flooding at our end.”  This wasn’t completely true, but I hate to make people worry.

“Oh, I’m so relieved. That was the main thing. Oh, and I wanted to tell you that S— got the things you sent him. Thing is, now he wants to go buy all the most expensive mountain biking equipment!” she exclaimed. Now I was even more confused. The mountain biking link was a little too close to be a coincidence. And now, my yet-groggy mind racing, I came up with a link for the name S—: this could be my wife’s ex-boyfriend from high school, with whose mother she is still very close: close enough, in fact, that she gave us a gift of eight table settings of fine porcelain plates, bowls, cups, saucers, etc. Could she have said “This is S—’s mom”? Or had I even heard the name correctly? And could I have actually sent anything to S—? Perhaps a thank-you card, since we’d stayed with him toward the end of the bike tour. Could I have enclosed anything with the card? I was just too groggy to remember.

“Well, you know I always like to encourage bicycling, even if it does tend to get expensive,” I said. This seemed like a safe statement.

“Yes, well, not for you, of course, since you work full-time at a bike shop!” she said.

Now I was really confused. Surely this couldn’t be a coincidence ... up until recently, I actually had been working full-time at a bike shop. So I decided to go out on a limb: “Well actually, I’m only working weekends at the shop now—I’m working downtown now.” This was true.

“Yeah, downtown.” I didn’t feel like getting more specific, since I was probably talking to a stranger.

“Well, how’s my daughter?” she asked. Well, she was somebody’s mother-in-law, anyway.

“Oh, just fine,” I said. “She’s still sleeping. Should I get her up?” I felt I was now mere seconds away from a wonderful practical joke. I could tell my wife her mom was on the phone, and moments later—after they’d shared a very awkward and bewildering exchange—my little charade would be over. Unless, of course, this woman were to end up thinking her son-in-law was completely sane, but her own daughter was crazy.

Okay, that was the kicker. My actual mother-in-law would know full well that her daughter hadn’t yet found a job. It was clearly time to clear things up, but it seemed I’d taken the conversation too far to stop now.

I’d been through this before. When I was a teenager, I got a phone call from my old friend Steve—at least, that’s who he claimed to be. It seemed impossible that this guy could know another male Dana, so I played along while trying to remember who Steve was. This went on for several phone calls, over the course of which I realized there was no way I knew him. He and the real Dana had been friends in Michigan (where I’d never lived), and he said we should go out drinking sometime (which I was too young to do). But I didn’t know how to explain myself, so far into our rekindled friendship. Things finally unraveled when he called up and my mom answered. “No, I’m his mother!” she said before hanging up on him. “Who was that?” I asked her. “I don’t know,” she replied, “but he said, ‘Who are you, his woman?’”

And so now here I was again, sure this was a wrong number but unable to find a way out. So I told this would-be mother-in-law, “Yes, we’re both perfectly safe. Thanks for calling.”

“Okay, bye,” she said, and then there was awkward silence. Was her son-in-law supposed to say “Love ya, Mom,” or maybe “Love ya, Jane”? Was she waiting for this? Was I getting some poor son-in-law in trouble?

“Bye,” I said, and hung up the phone. I wondered how her daughter and son-in-law were actually doing. Probably had to evacuate their home. Could be dead. Oh well, at least the nice lady wouldn’t worry.

An hour later the phone rang again, and I asked my wife to answer it. She picked up and, after a pause, said, “No, nobody here by that name.”
Posted by Dana Albert at 9:30 PM