My older daughter is looking to join her high school’s mountain bike team. We went to the kick-off luncheon recently, and the head coach said to her, “I hope we’re not too late ... your dad hasn’t turned you into a roadie yet, has he?” I was surprised that he’d pinned me as a roadie. What gave it away ... my lack of facial hair?

The story that follows is from around 1996, when I was about 25 pounds heavier than I am now, from too many business trips and not enough biking. I hesitate to call this a “big ring tale” (i.e., a tale where at a pivotal moment the hero shifts onto the big chainring, which is the rough equivalent of Popeye eating his can of spinach) because mountain bikes don’t really have a big ring. Most have no more than a 46-tooth, which is smaller than the small chainring a pal of mine sported on his road bike back in ’82. But, as with so much of my life, this will have to do.

(The photo below is the oldest one I could find. It’s from a decade after this story; imagine this guy with another 15-20 pounds of pure gut.) 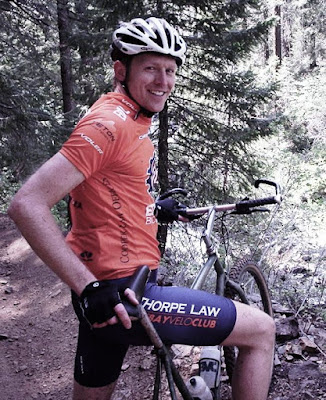 Cycling has been frustrating for me since I quit racing. I just slow down more and more every year­. Today I stepped on a scale and I weighed in at 200 pounds ... my all-time high. Last week, I was riding my normal loop and some guy just blew past me. Within a minute he had 30 seconds on me. And it occurred to me that a few years ago, I was that fast. In fact, for several years I was that fast. Sure, I could get there again, but I don’t see it happening. A lot would have to change. I wouldn’t say age has so much to do with my decline, but accepting the new, sluggish me is probably good practice for getting old.

Which brings me to the tale of my ride with Dennis, a pal who never actually raced (though I was on the college team with his brother). We rode over the Golden Gate Bridge to start, rode about halfway to the top of the Marin headlands, and then took a series of trails and fire roads that loop around more or less randomly.

About two hours into the ride, we crested a hill and from behind us came a lean, shaved-legged, slick-looking dude with $150 Oakley sunglasses, a jersey that looked just a little too clean, and an expensive aluminum Stumpjumper M2 mountain bike, complete with Rock-Shox suspension forks. He was going at a respectable speed (more respectable than ours, obviously) but I didn’t think that warranted his lack of a greeting. When I said “Hi,” he just ignored me. I hate that.

I didn’t expect to see this guy again, but on the descent I happened to overtake him. He’d gotten himself into a bit of trouble taking a curve too wide, and I had ample room to pass him on the inside (the alternative being, of course, to crash into him). I suspect he’s a road racer who isn’t terribly experienced in the dirt. Anyway, he seemed embarrassed, and yelled, “Hey, buddy, call out when you pass!” This all happened, of course, in a matter of a couple of seconds, so I didn’t have time for a response.

I found this irritating. I mean, he was essentially out of control, in the process of being a major trail hazard, had been decidedly antisocial earlier, and now expected some kind of special trail protocol. If your natural tendency is to give people the benefit of the doubt, please suppress it and consider this guy our enemy. That will make my story much more enjoyable for you.

A bit later, Dennis and I regrouped, and the slick dude passed us again. This time he was working really hard to keep up with another racer-type on a road racing bike with cyclocross tires. This bike was really better suited for the fire road we were on, since the surface was smooth and the grade was steep. (Mountain bikes, no matter what the salesman tells you, are in fact heavy and slow.) Initially, I let the two go; they were going far faster than Dennis could have gone, and to be honest, climbing that hard really didn’t look like a pleasant thing to do. Besides, they were clearly both well-trained cyclists who wouldn’t take kindly to any insolence from an apparent nobody such as your humbly equipped, hairy-legged narrator. I decided to leave well enough alone.

However, when they were almost out of sight I suddenly changed my mind and decided to go after them. Of course it was a stupid idea to strike when the iron was stone cold, but I went for it anyway. In fact, I threw her in the big ring! The big chainring, I mean: the stuff of heroes. Thus began one of life’s rare and delicious surprises. For no good reason, my body decided to perform as it used to, in the days of yore. I was amazed at the rate of acceleration I was able to attain. Within no time I must have been going three times my initial speed.

As if in a video game, I passed several chance cyclists as if they were standing still. My effort took on an unreal quality, as if I had somehow become “seemingly infinitely powerful” (a phrase I coined back in my racing days to describe whoever was beating me at the time). It seemed as if I was ascending the hill about as fast as I could have descended it. (In retrospect, perhaps I wasn’t going that fast, but please permit me these narrative indulgences.)

Needless to say, I came up fast upon our slick mountain biker dude, who had by this point been dropped by the guy on the road bike. To say I caught this quasi-man would be an understatement indeed; I was like a hawk overtaking a earth-bound duckling, or a tsunami rolling over a boogie-boarder. This time, I took a wide outside line around him, and zestfully shouted out, “PASSING ON YOUR LEFT!” The look of absolute disbelief and disappointment on his face was priceless. I imagine he scrambled to pick up his pace and get my wheel, but I sure wasn’t around to see it. I may have actually spun him around like a pinwheel.

By this point I had my sights set on the road bike guy. Not out of any vendetta; I assure you I had none. I simply sought to give the macho dude the message that I don’t even bother with his petty ilk—that I’d had my sights set on the roadie all along. And this is how I found myself in the middle of a badly considered and hellishly ambitious endeavor.

By this point, my speed was so high there was no way I wouldn’t catch the roadie. In fact, I believe that only my ten extra pounds of gut kept me from reaching escape velocity. Oh, I caught the roadie, all right, but as the unchallenged king big man cyclo-god, ruler of the trail and destroyer of mountain bikers, he had slipped into a lazy, complacent rhythm which was only a starting point for him. He instantly responded to my unwelcome presence, and by the time he overtook me, I was beginning to really suffer. The initial euphoria of my conquest had faded, and with it the Supersize 32-ouncer of adrenaline, the six-pack of endorphins. I was like the car-chasing dog who’s caught up with a Dodge Ramcharger. Now what?

The roadie was hella fit and capable of chitchat. “I was wondering if somebody was going to try to catch me,” he said, clearly as a deejay and as calmly as Clark Kent. I lacked the breath to say, “Well, that arrogant jerk with the fancy shades made his bid, but I guess you didn’t notice.” Instead, I attempted a suave “yup,” and it came out a croaked “yip.” At this point the roadie seemed to sense that I’d written a check I couldn’t cash. He said, “Now that you’re here, are you ready to hammer?” My back to the wall, I put my illusions aside and came clean. “No,” I told him.

Well, that was nice of him. On a flat road, his gesture would have been more kind, but this was a long, hard climb and I wasn’t exactly excited about suffering on his wheel like a prize fighter up against the turnbuckles. He picked up the pace, and I was thinking just clearly enough to know that I should try to stay with him and not pass up a good thing, since the spiffy guy behind us was probably highly motivated to fish his ego out of the ditch by catching me. So, I made every effort to glue myself to the roadie’s wheel.

With every pedal stroke, his gift of a draft seemed like less of a good thing. Soon I was deeply in the throes of oxygen debt. Eventually, I had to take a second mortgage on my legs. The bill collectors began to come around, and I was beginning to pay a lot in interest. Then my body took on the kind of crazed effort that a praying mantis makes when he continues to copulate even after the female has eaten his head. All the blood began to be rerouted past my brain, directly to my legs. Brain cells immediately began to die at an alarming, glue-sniffing rate, and with the loss of intelligence I began to feel more optimistic about the world. Maybe Newt Gingrich is actually onto something, I thought.

Then all thought was crushed out and I became a simple, pedal-spinning automaton. The only thing that saved me from riding myself into the ground, in fact, was a panicked telegram from my legs that finally made its way to my brain: ZIPPY GUY WAY BACK STOP NO NEED TO CONTINUE STOP STOP STOP.

I slowed down just enough to restore my will to live. When would this climb end? For all I knew, it went on for miles. I had suffered so badly that the slightly decreased effort gave me a lot of relief, even though I was still going pretty hard. I finally crested the hill about midway between the roadie and my victim. I waited at the top for a while, and when the vanquished would-be-big-shot came by, he didn’t look too happy. I tried to look as nonchalant as possible, and I don’t think he figured out that the effort had left me with a bad case of oxygen bankruptcy, coupled with acute testosterone poisoning.