From the Archives - The Big [Bike Shop] Screw-Up

It’s another slow news day at albertnet.  (More to the point, it’s a big everything-else day and none of the crap I’m busy with is worth writing about.)  So I’m plunging into the depths of my hard copy archives for a little poem to present.  Insofar as a central goal of this blog is to store copies of my work offsite, all is going according to plan.

As a bonus, I’m going to provide all-new footnotes on this poem.  Pretend you found this in your Norton Anthology of American Teen Poetry. 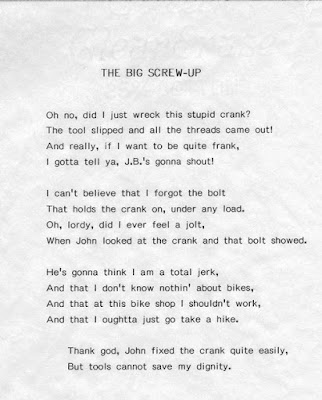 Line 2:  the tool slipped and all the threads came out

If you think it’s a bit silly to write a sonnet about a mishap at a bike shop, consider that I originally envisioned this as a Broadway musical.  I worked on it for nine years before suffering a nervous breakdown.  That’s not true.

I’ll concede that I never gave much thought to the audience for this sonnet.  I mean, who the hell would even know what, and whom, I was writing about?  It’s actually entirely possible no living soul has ever read this sonnet.  And since almost nobody reads this blog, you could well be the very first reader of the sonnet!  You should win a prize, maybe a free take-apart eraser or homemade bookmark or something.

So, “crank” in this context is the crankset on a bicycle, which is what the pedals attach to.  The crank, in bikes of this era, was bolted on to the spindle of the bottom bracket:  that is, the axle-like thingy that spins around.  It was a press fit:  you stuck it on there, then cranked it down with this bolt, which pushed the crank farther onto the spindle until it was good and tight.

To remove it, you first removed the bolt, and then—because the thing was pressed on so tight there was no other way to remove it—you screwed this tool in there called a crank puller.  It had a threaded part, male, that screwed into the female threads of the crank.  Then there was this thingy that screwed inside of it and pushed on the spindle.  It’s kind of like how, when someone in a cartoon wants to pull a door open, he has to push his foot against the doorjamb.  Kind of.

You had to be careful with this type of square-shoulder spindle.  If you didn’t tighten the bolt enough, the crank could fall off, but some cranks were made of such cheap aluminum, you could destroy them by tightening too much.  If you just kept cranking on that bolt, the crank would move farther and farther up the spindle until the chainring mashed into the frame.  I once saw a guy do that on a really cheap bike, a Miyata Valley Runner (or “Valley Girl” as we called them).

J.B. was John Burnell, the head mechanic at the High Wheeler (or “Thigh Feeler” as we called it).  He was a total bike guru and we were all in awe of him.  He was also a very nice guy, unless you crossed him.  We used to solder the ends of the brake and gear cables on all the bikes we built, and one time my brother Bryan accidentally let some molten solder dribble onto J.B.’s foot (he was wearing those Adidas race slippers, without socks).  J.B. issued an impressive litany of profanity, with significant volume and perfect inflection.  A cussing-out tour de force, and Bryan looked like he could have died of shame.

Line 6:  holds the crank on

Bikes weren’t quite as well designed back in those days.  If the crank was a tight fit on the spindle, you could probably get away with no bolt at all, at least for awhile.  But if the fit wasn’t so good, the whole thing would eventually rock loose and the bolt would rattle off and the whole crank would fall off onto the road.  This could happen in the first 30 days of a bike’s life, and is the #1 reason shops traditionally offered a free tune-up a month after purchase.  Nothing looks worse than a crank that literally falls off an almost-new bicycle.  (Except, perhaps, a morbidly obese cyclist wearing bright pink Lycra.)

Nobody says “lordy” anymore and I certainly didn’t at the time I wrote this.  This is a classic case of throwing in a worthless two-syllable word just because it happens to be iambic and pads out the line metrically.  No poet worth his salt would resort to such a cheap trick.  I could have so easily done better, though the most obvious expression that comes to mind would be blasphemy.  I’m not sure blasphemy belongs in a sonnet, at least one penned by a teenager.  In those days my brothers liked to avoid profanity by substituting “TANJ,” an acronym they made up for “there ain’t no justice.”  I found this so goody-two-shoes as to be more offensive than blasphemy.  Meanwhile, its double-entendre—there existed at that time a manufacturer of steel bike frame tubing called Tange—was erroneous because Tange was pronounced “Tan-GAY,” not “tanj.”

How stupid was I, that I could forget to remove the bolt?  Well, oddly enough, this wasn’t a terribly uncommon mistake.  You see, bikes tended to come with a dust cap installed in the crank, which served no real purpose so all us racer-types left them off.  So removing the dust cap sometimes led the inattentive mechanic to think he’d removed the bolt.  Meanwhile, some cranks (such as Shimano) had a “one-key release” whereby removing what looked like a dust cap was also removing the bolt.  But all this is backpedaling (no pun intended).  It was a dumbass move.

As I came to realize years later, you have to be careful with one-syllable words when writing a Shakespearean sonnet.  As explained here, a pair of one syllable words will often have a natural inflection:  for example, saying “hot dog” or “pit bull” correctly requires the emphasis to be put on the first word.  It’s “PIT bull,” not “pit BULL.”  If the poet fails to understand this, he or she ends up with clunky lines like this one.  I could so easily have written, “He’s gonna think that I’m a total jerk” instead of “He’s gonna think I am a total jerk,” but I was as bad a poet as I was a mechanic.  Worse, probably.

Line 10:  anything about bikes

Count the feet on this line.  There are 5½.  What part of “pentameter” did I not grasp?  It’s not iambic penta-and-a-half-meter!  I guess “anything ‘bout bikes” would work better but is kind of cheating.  “And that I don’t know anything at all” would work fine, and then I could end line 12 with something about working at a mall, or cleaning bathroom stalls.  Oh well.  Too late now.

J.B. never accused me of knowing nothing about bikes, but once I was trying to file a new cotter pin for a cottered crank and getting nowhere, and he said, “You don’t know anything about cottered cranks!”  Then he paused, reflected on the state of the industry, in which cottered cranks were on the very brink of obsolescence, and conceded, “I guess that’s actually no big deal.”  Then he took the crank and the cotter pin away from me, expertly filed the pin to the right shape, and finished the repair.  You know what’s weird?  The industry has progressed so far from there that I don’t actually know much about the modern cranks on my own bike.  All this technology has passed me by.

Line 11:  at this bike shop I shouldn’t work

This line really makes me wince.  I suppose there’s plenty of precedent for a poet to put a prepositional phrase before a predicate (e.g., “at this bike shop I shouldn’t work” instead of “I shouldn’t work at this bike shop”), but nobody talks or writes that way these days, so such a construction sounds a) contrived, b) like the writer is trying to sound all belles-lettres-y, c) like the writer is trying to skate by on a technicality, and d) like Yoda.  Reading this over, I want to substitute “like I oughtta be fucking fired,” and meter be damned.

God, it just gets worse and worse.  Nobody says “go take a hike” anymore, and nobody did in the mid-‘80s, and stupid expressions like this are so verbally weak as to be the opposite of poetry.  A poem should use vivid details that affect the reader viscerally.  This line should say something more bold, like “I should have molten solder dripped down the front of my shorts.”

It’s true that J.B. fixed the crank, and I don’t remember it taking him very long, but I cannot remember how he did it, so maybe it wasn’t actually that easy.  It’s possible I only destroyed some of the threads.  The crank puller would thread in pretty far normally, but perhaps the bolt kept it from going in far enough to do real damage.  If there were good threads farther in, J.B. would have just had to tap out the wrecked ones to remove the damaged metal.  I don’t think he inserted a helicoil.  The fact that I’m still pondering this 30 years later tells you how gutted I still am about it.  I hope J.B. reads this and can at least appreciate my contrition.  He probably still remembers my jackass maneuver himself.  Someday a journalist will ask him, “Did you ever work with Dana Albert, the Campanile clock tower shooter?” and he’ll say, “Oh, yeah, he was a moron.  Once tried to pull a crank without removing the bolt.  But I didn’t figure him for a complete psycho.”

I have to admit, I feel pretty good about how well “easily” rhymes with “dignity.”  The notion of a tool saving something seems a bit of a stretch at first, but that’s exactly what J.B. did with the tap or whatever tool he used—he saved that crank.  Maybe it’s still going strong on some bike somewhere.