Is the Red Hook Criterium Series Good For Cycling?


NOTE:  This post is rated R for mild strong language and intimations of gnostical turpitude.

Let’s have a little fun before burying ourselves in a lot of tedious text:

Daaaamn, is that a great crash, or what?  I could watch that over and over again.  In fact, I just did.  So did you—don’t deny it.  Really gets the pulse racing, doesn’t it?

Both of these fine films were shot at the Red Hook Criterium in Brooklyn, part of a series of races that require the use of fixies—you know, those track bikes hipsters ride that have no brakes and don’t allow coasting.  Racing theses bikes on regular streets, instead of on a velodrome, has proven a great formula for generating lots of crowd-pleasing danger.

Is this kind of racing a good idea?  Should it be promoted, or banned?  That’s what I’m exploring with this post. 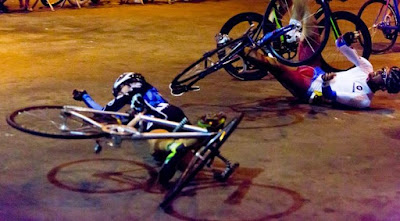 Anybody who’s ever raced a rinky-dink criterium in some forlorn business park, with a tiny smattering of spectators (all of them related in some way to the racers) will appreciate the fact that the Red Hook series draws a massive crowd of spectators (17,000 in the case of London’s event).  There’s no doubt that this kind of race is increasing the visibility of cycling.

You know what?  I’m getting bored with all these words.  Here’s a video compilation of Red Hook crashes from 2013:

The first crash is my favorite because the (amateur) cameraman gets involved.  I just wish there was another camera angle so I could watch the third racer flip over the fence onto the guy.

The first lame thing about this series is that the whole premise is just so fucking stupid:  hey, let’s make riders use the wrong equipment, and race in the dark, so that there’ll be lots of cool crashes!

The next lame thing is that this race thinks it’s cool because it attracts a lot of hipster types.  According to this Velonews article, “[Director] David Trimble held an unsanctioned, late-night race in Red Hook as a challenge between bicycle messengers and local road racers” and “required everyone to compete on a brake-less fixie, the preferred tool of bike porters.”  Of course once the race got big, the messengers were no longer much of a factor, because we all know bike racing is for the idle rich, who have time to follow special training plans involving “efforts.”  And yet, having started out as this illegal underground thing, the race desperately clings to a self-professed rebel mystique.  This “teaser” documentary by Trimble, with its self-satisfied air, almost made me throw up into my mouth. Of course it doesn’t mention the crashes, which are obviously the point.  It’s a little like a commercial  for Oreos that celebrates the wholesome wheat flour without mentioning the sugar and fat.

And why are fixies the “preferred tool” of tools?  Because they’re stupid and unpractical, of course.  Their unsuitability for urban riding makes them edgy and cool, kind of like cigarettes, so they naturally appeal to vainglorious image-obsessed douchebags.  Now, I want to pause here and point out that not all bike messengers are like this.  Go to New York City sometime and check out the full spectrum of messengers.  A fair number of them are just a step above homelessness and ride really crappy department store bikes worth less than the lock they’re secured with.  I saw one poor dude who had to make do with a girl’s model.  Not all messengers are narcissistic curators of their self-important self-image.

I realize I’m getting into slippery territory here … if I don’t like fixie-riding hipsters and the lycra-kitted bike dorks on $5,000 carbon-wheeled track bikes who weirdly seek to emulate them, shouldn’t I want to watch videos of them crashing at high speed?  Fair point.  In fact, when I watch that first video, I can’t help but be annoyed that it’s not edited more tightly.  Check out this video here and you really appreciate the impressive capabilities of modern video-editing software.  Why does this albeit spectacular bike crash video run for a full 43 seconds, when all the worthwhile action is over after the first 11?  Meanwhile, the auteur obviously isn’t a bike racer himself because he fails to pan correctly and we miss part of the crash.  About 6 seconds in, you can hear the telltale sound of a riding going down, just out of the frame, but the cameraman doesn’t react.  It’s a good thing more guys stacked into the first guy, or we’d have missed the whole thing!

So yeah, there’s a part of me that says we should promote, and indeed enhance, this version of the sport.  What I’d really like to see is one corner without fencing, where they periodically allow spectators to blast racers with a fire hose.  Wouldn’t that be spectacular?  Or once in a while they splash oil across a corner.  Of course, the spectators shouldn’t be off the hook here … they need to get involved in the carnage as well.  Why not get a booze sponsor involved, and create a drinking game for the spectators?  Every time there’s a crash, everybody has to do a shot.  When some bozo gets sufficiently drunk, a course marshal opens the fencing and pushes him out into the street where he wobbles around a bit until a rider slams into him.  Now we’re talking!

But that’s not actually where this Red Hook series is heading.  Naturally, as it grows and attracts money, it becomes more mainstream, despite what the director would have you believe.  According to this article, “Trimble, who first organized the race in 2008 as a celebration of his birthday, said he consciously tries to balance the race’s grassroots feel with its growing popularity.  ‘As for people saying the atmosphere is getting more mainstream, it’s not like we have a bank sponsor,’ Trimble said. ‘It’s gotten bigger but believe me, it’s grassroots.’”

Okay, first of all, what kind of self-absorbed dickwad orchestrates his own birthday celebration?  Second, his “bank sponsor” comment is obviously bullshit given the event’s current “six-figure sponsorship portfolio.”  If Rabobank or Citibank offered shitstacks of money to grow the event, Trimble would accept it in a heartbeat.  And “grassroots” generally refers to an idealistic campaign to change society in some useful way.  How is a bike race designed for maximum crashes achieving that?

The biggest problem with Red Hook

Imagine if, after you watched that first crash video a dozen or so times, and forwarded it to all your pals, somebody told you, “Hey, you know that second guy who went over the fence?  He ended up a quadriplegic!”  Suddenly this wouldn’t seem like such fun, would it?  And racers do get maimed.  As described here, a 15-year-old Red Hook participant had a terrible crash, was unconscious in the hospital for two weeks, and had to have “his face rebuilt with 23 screws and numerous metal plates.” 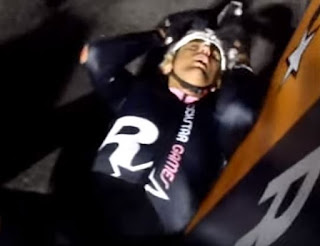 Yeah, I know, crashes do happen in traditional bike races, but not nearly as often since racers are allowed to use proper (i.e., road) bikes.  When you watch a normal criterium, the compelling spectacle isn’t how many riders crash, but how many don’t.  Go watch the Nevada City Classic criterium sometime, and watch how expertly the racers carve the sharp downhill corner.  I wouldn’t take my family to watch this race if I thought it made cycling look dangerous ... I mean, why would I, when I’m trying to encourage my daughter to race, and my wife to let her?  A real criterium, where riders can modulate their speed and keep that inside pedal up through the corners, demonstrates how safe cycling can be, even at high speed.

The Red Hook series, on the other hand, gives newcomers to the sport some cheap thrills while painting a picture of cyclists as total madmen.  Comments on the Red Hook crash compilation video  include innocent questions, e.g., “are these bikes designed for racing?﻿” and “why do they race at night?” along with typical inane comments, e.g., “Brooklyn girls be super ugly!!!﻿” and “Y you crash bitch you only doing 5mph on the stupid turn﻿.”  Clearly these are not cycling aficionados.

Is it just me, or is there a fundamental hypocrisy in play when an event that calls itself “grassroots” actually undermines the idea that cycling can be a safe, responsible activity?  As a person who wishes lots more people rode bikes instead of ensconcing themselves in giant SUVs, I think watching a bike race should make people want to ride bikes, not shudder and say, “Those dudes are crazy!”

And speaking of those dudes, I think it’s pretty disgusting that they’re willing to be led around by their egos and seduced into riding a brakeless bike, at night, in thrall to big crowds.  I’m reminded of Olympic women volleyball players who, for years, complied with the rule that they had to wear bikinis.  According to this article, one top player candidly acknowledged the mentality behind this:  “‘The people who own the sport [the Fédération Internationale de Volleyball] want it to be sexy,’ Johns told the Sunday Times. ‘I used to play in shorts and a T-shirt and was reluctant to change. But if it gets volleyball attention, so be it.’”  I can imagine a very similar quote from a Red Hooker:  “I used to ride a road bike so I could brake and coast through turns, but the race organizers want it to be dangerous.  My road rash really hurts but if it gets cycling attention, so be it.”

Does cycling need this kind of attention?

Ultimately, to enjoy watching the true sport of bicycle racing requires some sophistication.  The sport isn’t for everybody, and that’s totally fine.  Other spectator sports are subtle, too.  Think of baseball, with its bizarre tapestry of strange rules, secret signals between players, and so forth … would it benefit from a big dose of lowbrow, brute spectacle, like if after three balls the pitcher was allowed to throw the next ball right at the batter with full force?  Or if the outfield were studded with landmines?

Celebrating the crowd-pleasing savagery of the Red Hook series seems pretty pointless.  Does cycling really need to grow as a spectator sport?  I’d argue no.  What’s wrong with a sophisticated and elite—albeit somewhat rare—fan, who responds to drama, and suffering, and tactical savvy, rather than mere bloodshed?  And even if you do want the sport to attract more spectators, I doubt the Red Hook freak show is going to win over any true fans—just a bunch of looky-loos who’ll eventually get bored and wander off to go find a cockfight, or dogfight, or political rally.  I myself have a limited appetite for bike crash videos … sure, I had a little fun here, but I can’t picture myself engaging in this coarse activity for long.

I say we treat the Red Hook races the same way we treat the hipsters, with their ugly piercings, hackneyed tattoos, skinny jeans, and fixies:  that is, ignore them, and hope they just go away.