NOTE:  This post is rated PG-13 for mild strong language and instances of grossness.

In the spirit of DIY, I’m going to make my own candy!  Do you have any pointers for the adventurous novice chocolatier?

Don’t do it.  You might be a great cook, and heck, you might even be a great baker, but candy is really, really hard.  Just go buy some.  Seriously.

In a letter years ago, you said some very harsh things about carob.  In fact, if I remember correctly, you described it the way religious people write about Hell, or the way Berkeley liberals (i.e., Berkeley residents) talk about Trump.  Why?

The problem with carob is that you don’t see it coming.  If I had my way, the FDA would require carob-infested products to glow bright green, like antifreeze, as a warning.  When I was a kid, my dad’s girlfriend made a batch of what she called “hypoglycemic fudge,” only she didn’t tell us that up front.  She just served it.  Slicing off a giant wedge, I found the consistency to be perfect under the knife.  My mouth was actually watering as I took a large bite.  Tooth-feel was exquisite and for a fraction of a second I thought it was perfect fudge—but then the flavor hit my tongue.  I couldn’t have been more stunned if it had been made with dog shit.  But I had to pretend to like it.  Carob is so bitter, and so was I.

Carob is one of those substitutes that falls so far short, it just reminds you what you’re missing.  It belongs in the Hall of Shame with such villainous products as microwave popcorn, Tang, Velveeta, powdered milk, soy cheese, and Tofutti.

Your syndicated column covers all kinds of candy, from caramels to fruit chews to chocolate fudge.  Why not call yourself Dr. Candy?

I’m thinking it would be really fun to make homemade fudge with my teenage daughter!  Do you have a good recipe to share?

I get so many letters asking for recipes, I feel like I have to answer at least a few of them—but  as I’ve said before, just don’t do it!  It’s fine to try your hand at a soufflé or at brewing your own beer, but candy is hard—really hard.  I know this from bitter experience:  as a teenager, I tried to make divinity with my brother.  In the process we invented a new kind of plastic.  The cooking pot actually had to be thrown away.  My mom was livid.

Now, if you’re bound and determined to do this, you’re on the right track asking for a recipe.  No, I won’t provide one—I refuse to get involved in your doomed effort—but I will steer you toward a good source.  Go see if “Real Simple” online has a recipe, because I used to get that magazine and once found a recipe for ice cream sandwiches (look, here it is now!).  Just three ingredients (ice cream, cookies, and toppings), and one easy step.  That’s the kind of recipe you want.

On the opposite end of the spectrum is the recipe for “Fudge Cockaigne” in The Joy of Cooking.  My teenage daughter made that—or, rather, a failed approximation of that—today.  (Did I help?  No—I refused, even when she was totally underwater and begging for assistance.)  Check out this instruction:  “When nearing 234 degrees, there is a fine overall bubbling with, simultaneously, a coarser pattern, as though the fine bubbled areas were being pulled down for quilting into the coarser ones.”  Are you kidding me?  What’s amazing is that my daughter read the recipe first, three times over, but instead of running screaming from the room, she shrugged and thought, “How hard could it be?”

The answer?  Very hard.  Look at the sludge she came up with, $12 in ingredients and two hours later: 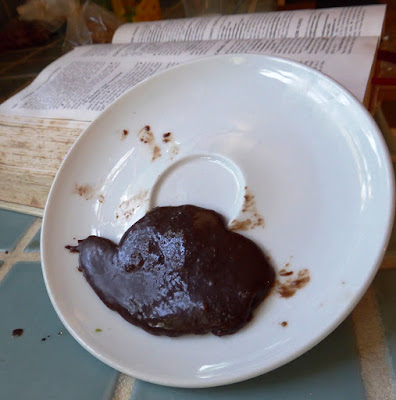 Actually, you know what?  Go for it.  Make Fudge Cockaigne with your daughter.  Destroy a perfectly good cooking pot in the process.  Consider your kitchen a microcosm for the doomed, futile world we’re stuck in.  Teach your daughter to give up on her big ideas—might as well get that over with.  All is vanity.  The center cannot hold.

I’ve heard some great things about chocolate, such as its antioxidant qualities and the fact that it raises HDL.  Is this wishful thinking, or is there science behind it?

If you look closely at any chocolate product, you’ll see this fine print:  “Purported benefits of chocolate have not been evaluated by the Food and Drug Administration.  This product is not intended to diagnose, treat, cure, or prevent any disease.”

Okay, you won’t see any such thing.  But while you’re looking at the fine print, check the ingredients to make sure you’re really eating chocolate, and nothing but chocolate.  You know what “natural flavors” means?  It basically means artificial flavors.  “Natural” means “not created in a test tube,” but it doesn’t mean your “chocolate” or “chocolate flavored” or “chocolaty” confection tastes like chocolate for the right reason (i.e., being actual chocolate).  If food scientists discover that giraffe semen imparts a chocolaty flavor, they can add it under the “natural flavor” label.  And as far as I know, giraffe semen isn’t an antioxidant.  So whatever the benefits of chocolate, don’t forget that it contains sugar and fat and often a whole lot of other crap that certainly isn’t good for your health.

(Okay, I don’t know that giraffe semen is actually used for flavoring.  But vanillan, often found in “chocolate” products, can be made from wood pulp, creosote, and even cow dung, which would qualify as a “natural” flavor.  Vanillan is also commonly biosynthesized.  Yum!)

I read an article about this stoner-type college dropout who, after an epiphany on a ski lift, decided to become a chocolatier (even though he had never liked chocolate), and with some cash from his mother and his uncle, he started a chocolate company called Dagoba that was eventually bought out by Hershey so now he’s rich.  So candy must be pretty easy to make!  Why wouldn’t I give it a try?

Go for it.  Just don’t bring my name into it.  And you might take a lesson from the Dagoba guy, who made his first batch by “melt[ing] two batches of organic chocolate,infusing one with milk chai, the other with raspberries and rose hips.”  That is to say, one of the ingredients in his candy was:  candy.  See?  He was following the “Real Simple” model!  So as you go into business “making” candy, try to find the right balance between food science and marketing.

Why can’t we have more candy?  It’ll get us out of your hair and stop our petty sibling feuds, and as an added bonus, it will slowly poison us so that you eventually won’t have to deal with us anymore.  From a logical standpoint, the answer to your child-rearing problems seems obvious.  I trust you will take the reasonable course of action and we will be seeing some serious changes in your parenting style soon.

I told you not to bother me when I’m working!  And I’m not in a very charitable mood right now after your disastrous experiment with the Fudge Cockaigne.  I told you I wanted a forensic level of kitchen cleanup, and the floor in there still looks like a dog had diarrhea on it.  Now get back in there and finish cleaning!

What is the deal with white chocolate, anyway?

It’s a lot of B.S., if you ask me.  It’s not chocolate—not really.  It doesn’t have any actual cocoa, just “cocoa butter,” that fatty stuff they make lotion and ointment out of.  White chocolate is to actual chocolate what Red Vines are to real licorice.

Please help—my husband is driving me crazy!  He’s always buying this fancy-pants dark chocolate and with every new kind he finds, the percentage of cacao is higher and he’s that much more sanctimonious about it.  I don’t even enjoy eating it anymore—the bitter crap he’s bringing home is like what my mom used to bake with.  If an authority figure like you stuck up for traditional chocolate, that might finally sway him.

I won’t go on record supporting milk chocolate, which I don’t care for, but you’re exactly right—there’s a point of diminishing returns as chocolate goes too far upscale.  You start seeing added stuff like cayenne pepper or bacon bits or 18-karat gold thread or whatever and it becomes absurd.  Remind your husband that chocolate is a candy, not a pissing contest.  And then buy your own chocolate because he’s not going to listen to you.

I’m halfway into making vanilla taffy for the first time, and this recipe is telling me to pour the molten candy mixture onto a marble slab.  I don’t have a marble slab!  What can I use in a pinch?  Please reply soon!

I guess you’re new to my column!  Who told you making taffy was a good idea?  My advice is to pour that onto something smooth and slick but also expendable, like the glossy cover of an old copy of “Real Simple.”  And then throw it away.

There’s this one episode of “Mr. Rogers’ Neighborhood” where Mr. Rogers has this cotton candy machine, and this chef stops by to make some cotton candy.  There’s some really intense Alpha Dog stuff going on there, a simmering duel of one-upmanship lurking just beneath the politeness.  Definitely worth watching.  Check it out in the archives!

Screw it, I’m going to See’s.  I know that’s not a question.  I just thought you might want to know.

Be sure to bring your house key.  And pick me up a couple of Toffee-Ettes.