Mourning and the Digital Age

This will necessarily be the soberest thing I’ve ever posted.

A good friend of mine died last Saturday, trying to rescue his six-year-old daughter after she’d been swept off the beach by a rogue wave.  Both father and daughter drowned.  This indescribably sad accident is not an appropriate topic for this blog, and yet I cannot fathom writing about anything else.  Nothing else seems to matter right now, and to write on a lighter topic would be to ignore my sadness.  It’s the elephant in the room I feel I should confront, so that maybe, eventually, I can go back to more quotidian topics.

So, I’ve decided to come at this thing sideways and examine the more general notion of how the digital age affects the grieving process.  I find I have a lot to say about that.

There’s no good way to receive such horrible news, but some ways are more awful than others.  I learned over the phone from a friend on my bike club, who’d been contacted by a journalist looking for background on our late friend.  At least when a friend breaks it to you, there’s a moment to brace yourself as he gasps or sobs, and he’s bound to treat the news with the delicacy it demands.  Contrast that to finding out via the Internet.  I ended up googling the story because I simply could not understand what I was hearing.  The words were probably strung together adequately, but what they communicated didn’t seem possible.

It’s really jarring, and tacky, to see clickbait alongside such a tragic news story.  “Suri Cruise Looks So Grown Up on Set of Katie Holmes’ TV Show,” and “[Shocking] Remove Your Eye Bags & Wrinkles In 1 Minute!” accompanied the online news of this drowning.  As a friend of the bereaved family, I’m struggling to hang on to my belief that life is still good and meaningful, and yet there’s all this added evidence to the contrary.  These news websites are complete strangers to tact and decorum.

Then there are the typical Internet trolls, like the self-righteous shit-for-brains who commented (inaccurately), “there had been warnings of adverse surf conditions ... these were no ‘rogue’ waves.”  There was no advisory that day, and this jerk wasn’t there, and why does he do this?  What kind of sad sack makes sport of casting judgment on victims of a terrible accident?  And right below this, another comment:  “my neighbor’s step-sister makes $75 an hour on the computer.  Visit the website [...].”

I went to a website designed to collect tributes to the victims, which is fine, but everywhere I looked were rows or columns of buttons to share these tributes (and photos, etc.) via Facebook, Twitter, Google Plus, Pinterest, etc.  As somebody who avoids social media, I don’t like the idea that if I died, I might suddenly have representations of myself scattered across all of these platforms and I wouldn’t be around to protest.  This site also featured a “Donate” button to give money (presumably to the family).  Not all sorrow can be assuaged by money and I doubt this family did anything to set that up.  In the absence of a closely managed strategy—which I doubt any grieving family has the time or energy for—I could see a platform like this taking on a life of its own.

I did get some comfort from the tributes and shows of support on the website, but then I came to a post from someone who, by her own admission, didn’t even know the family but was nevertheless offering emotional support to my friend’s widow.  I found this jarring and a little chilling.  Perhaps I’m not the only one who did.  For whatever reason, the page has now been reconfigured to block anonymous readers, by requiring users to create a login.  I’m not quite ready to do that; after all, sites like this tend to overwhelm me pretty quickly.  The last thing I need is perpetual spam stemming from a glancing engagement with a web portal.

My point is, digital technology like clickbait, social media, likes, and links can creep up on us—or seem to fall suddenly out of the sky—without waiting for us to decide whether it’s good for us.  How many parents had the luxury of contemplating the influence of Facebook and Instagram on their teenagers, before those teens immersed themselves in this virtual world?  Who foretold this worldwide phenomenon?  (Answer:  nobody.  It wasn’t a phenomenon at first; it was just a technology.)  When it comes to grieving, how does the digital world fit in?  Would the healthiest thing be to close the laptop, power off the phone, and mourn in peace?

Who knows.  I do consider whether my personal inclination to opt out of social media is appropriate in this case.  After all, there are instances when it becomes antisocial to extend one’s neo-Luddite principles too far.  For example, for an adult in the corporate world not to have a cell phone is no longer tenable; we’re expected to be reachable.  And to not have e-mail in any industrialized society is nowadays absurd.  And so, when my bike club decided a tribute to our late teammate would be appropriate for our club’s Facebook page, and asked me to write it, I immediately stepped up.  It would be callous not to acknowledge the tragic death of our friend/teammate and his daughter, and I welcomed the chance to give this statement the thoughtfulness and delicacy it deserves.

Where the conveniences of digital life can become really wrenching is in the realm of digital caches and other storage.   On my smartphone right now, when I open Contacts, my dead friend’s name is right at the top on the “Frequently contacted” tab.  He’s also on the first page of my chat history (not deep correspondence, but just the most perfunctory logistical stuff like “Yo, I’m at Fieldwork”).  In the main phone app, there he is on the Recents tab.  In the Voicemail app, I still have a years-old message from him, when he called to see if I’d really been hauled away from Grizzly Peak Boulevard in an ambulance.  I originally kept the message as a handy way to remember exactly when that happened, but now I don’t want to delete the voicemail because it’s the only one from him that I have.  He’s all over my phone, like a ghost.

Of course most of these relics will be gradually pushed down the stack until they slip out of Recents altogether ... but that’s actually kind of disturbing too, like a bad omen.  Will my friend will be similarly pushed out of my memory by all the new stuff coming in?  (Of course not, but grieving isn’t a rational process.)  And what of my friend’s programmed entries in my contact list and phone book?  What about his presence in my archived message history, and that saved voice-mail?  I cannot bring myself to delete these.  How could I?   Sometimes humanity trumps efficiency—and perhaps it ought to.

My e-mail archive is another quandary.  I’ve got almost 700 messages from him I could sift through, looking for ways to jog my memory ... but is that healthy?  And that’s not even the entire trove; it’s only what’s stored in my current e-mail software.  I have some other virtual file cabinet I could probably delve into if I bothered to try.  At what point does this kind of sentimental, digitally assisted reminiscing shade toward the obsessive?  Obviously it would be weird and nutty to build a shrine for a departed friend, but that’s kind of what a digital archive is.  The difference is, the artifacts are enshrined automatically so we have access to them whether we’re pack rats or not.  Is it healthy to take advantage of this, or is it the emotional equivalent of picking a scab?

Browsing through old photos is even more captivating.  I hunted through my archive as part of the bike club tribute project, and was plunged ever deeper into memory, which naturally intensified the sense of loss.  How young we both look in that early photo!  (Subtext:  we go back so far, and now—nothing!)  Perhaps most bittersweet of all, for reasons I can’t quite grasp, is the last photo I have of my late friend, which is on my phone as well as my PC.  I distinctly remember him chiding me for my recklessness in riding past this bull to get the shot. 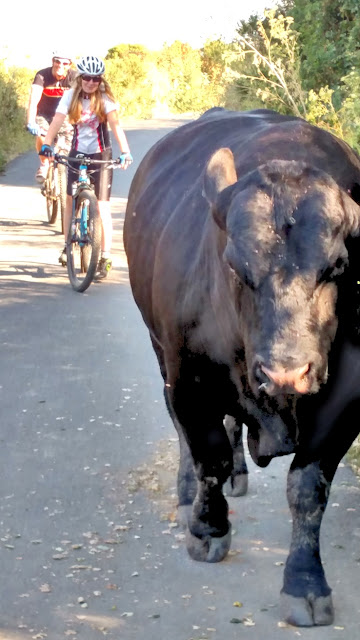 Maybe this photo makes me sad because it’s so recent, I didn’t even get the chance to e-mail it to him.

One of the hallmarks of our digital age is how we keep hopscotching from one brief thought to the next, based on this or that alert, picture, or other stimulus.  Such digital saturation is notorious for precluding careful contemplation.  Perhaps this is why I keep catching myself being self-indulgent—too wrapped up in my own grief to look at the bigger picture.  This family lost a father, a husband, a daughter, a sister, a brother, and a son.  I only lost a friend.  My grief is entwined with a more complicated feeling, something like guilt.

This feeling hit me like a hammer when, sitting at my desk and staring into space, I noticed my slide-show screen-saver start up.  It picks photos at random from my hard drive and displays them for 5 seconds apiece. At first the photos of my wife and kids, going back so many years, started to cheer me up—oh, remember when the girls were small, and wore dresses, and held hands?—and then I had this horrifying thought:  what if I had lost a daughter and a spouse?  Suddenly this slide show would be a torment.  Instead of showcasing family—the best part of life—it would highlight what has been taken away.  The entire photo archive, along with the e-mail archive and all those artifacts littering the smartphone, and so many posts and photos scattered across all those social media platforms ... all of these would intensify the grief.  What a torment.

I suppose I should try to coalesce these thoughts into some kind of pithy conclusion, but nothing is coming to me but the sense that it’s time to save this file and power down.