I got the idea for this post from the co-founder and CEO of Spoon University, which is a website devoted to a) educating college kids about how to “eat healthier,” and b) teaching college kids how to be online journalists. ( All Spoon content is written by students.)  The other day, the Spoon CEO said something like, “We have our most illuminating ‘moments’ when an article is shared widely, which happens when it strikes an emotional cord,” and as an example she cited a popular recent Spoon article about a beer based on Ben & Jerry’s chocolate-chip-cookie-dough ice cream.

I want college kids to love my blog and forward my posts, so I am taking on this subject myself.  Since I’ve already been scooped, I’ll just have to do a better job with this topic than the college kids did.  Watch me try.

I expected the main Spoon article to read like Fear & Loathing in Las Vegas, but it was fairly down-to-earth and mostly just covered the basic facts:
When I researched the topic on mainstream news sites, I really didn’t get any more information—so these Spoon kids seem well on their way to writing like the pros.  All the stories I found read like thinly veiled press releases.  And yet, this very minor news tidbit—another new seasonal beer!—has really generated a lot of press.  How did this indifferently reported story become so popular?  My theory is that people just really, really like beer.

Case in point:  I used my smartphone to photograph a beer recently, and because I’d accidently left Location Services turned on, Google Maps asked if I wanted to share the photo with future users investigating the pizza place where I snapped the photo.  It wasn’t a great photo or anything and didn’t capture the ambience of the place, much less showcase the pizza.  It was just a photo of a glass of beer, for Beck’sting.  But I thought heck, I’ll let Google use it.  They asked for a caption.  The beer was in a glass bearing the name of the pizza place, so after deliberating for 1/100th of a second I posted the caption “Pizza and beer … am I right?”  Amazingly, this photo has had 56 views already, despite the fact that you can easily tell from the thumbnail that it’s an utterly pointless photo. 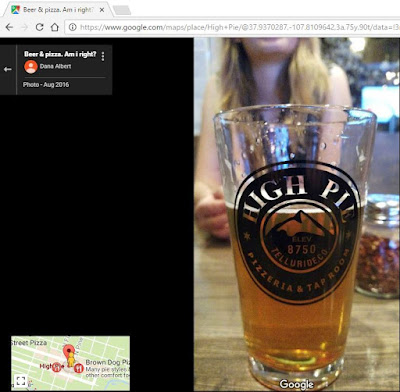 So:  beer.  People love to think about it.  Maybe beer + ice cream is some kind of magic pairing, capturing the minds and hearts of college kids everywhere.

What can I add to the coverage?

I will go further than the available news stories on this beer by answering the following questions:
As luck would have it, I’m traveling on business right now in the very locale where New Belgium is test-marketing this beer.  At an airport bar I ordered it, speaking really loudly so the attractive woman next to me would be sure to hear my bold and interesting choice.  I took a sip, and then waited.  I expected the woman next to me to say, “Well … how is it?”

After a minute or so she hadn’t said anything.  Had she not heard my daring, planet-saving order?  At this point the beer was two-thirds gone so I figured I better step up my game before it was too late.  “Hi,” I said to the woman.  This utterance didn’t come out very loud for some reason.  In fact it came out as kind of a high-pitched croak.  (Chocolate-chip-cookie-dough beer is only about 6% alcohol so it wasn’t exactly liquid courage, and I’m a shy person.)  The woman just stared at me like I was her dog and had just made a mess on the carpet.  But I wasn’t about to give up.  Summoning all my verve, I said, “Airports and beer … am I right?”  At this, the woman abruptly got up and walked away, leaving half her cocktail behind.

So how was the beer itself?  Well, let me preface my commentary here by saying I don’t consider myself an expert on beer.  Honestly, I bristle at the very idea of a beer expert.  I would hate for beer drinkers to end up sounding like wine aficionados, with all their fancy language.  Unfortunately, this may already be happening.

Consider the following highlights from the amateur reviews on beeradvocate.com for last year’s New Belgium Ben & Jerry’s-themed seasonal beer, Salted Caramel Brownie Brown Ale.  (Each bullet is from a different reviewer.)
Okay, nobody agrees on whether or not it’s salty; whether or not it’s sweet; whether or not the taste matches the smell; whether or not it tastes like a brownie. And nobody can even agree on the color. What the hell good are these beer people?

Thus emboldened by the state of the art in beer-blathering, here is my experience drinking the new flavor, Ben & Jerry’s-inspired chocolate-chip-cookie-dough ale.

I did not start with the beer at 48 degrees, as one reviewer thoughtfully did.  This was an airport bar, remember, where all the beer is near-frigid.  But you know, had I been pouring this at home, I’m not sure what I’d have done.  On the one hand, it’s inspired by an ice cream, so perhaps it should be drunk chilled.  On the other hand, it’s kind of inspired by cookie dough, so maybe it shouldn’t be all that cold.  I would probably need to consult the brewer on this.

I did not pour it into special stemware designed for beers.  I suppose I should have asked for this, at the risk of pissing off the bartender, in order to demonstrate my sophistication to the attractive woman next to me.  But this didn’t occur to me, as I was a bit preoccupied about my upcoming flight.

I also forgot to smell the beer.  This was before I’d started researching this blog post, remember.  And I don’t know a soul who actually makes any special effort to smell his beer.  Nor do the beer drinkers I know swish it around in the glass to check the “legs” (though six beeradvocate.com reviewers mentioned “lacing,” their descriptions being variously given as “light lacing,” decent amount of lacing,” “web-like lacing,” “spotty lacing,” “no lacing,” and “some lacing”).

All of this said, I have much to report on the flavor.  My first quaff (since I’m unabashedly incapable of sipping beer) set off a major alarm in my brain, as in:

Have you ever raised a glass to your lips thinking you were drinking one thing, but it turned out to be another?  Like, you think it’s water but it ends up being lemonade?  Or you think it’s orange juice but it’s grapefruit?  And for a second you’re totally freaked out, and then your brain figures out what’s going on, and you’re greatly relieved?  Well, I had that experience with this beer, big-time.

Look, I get it that it’s difficult to match the exact flavor of an ice cream, especially from a specific manufacturer like Ben & Jerry’s.  But New Belgium Brewing Company has a reputation to protect, and there’s no other way to say it:  they really shat the bed with this beer.  Don’t get me wrong, I was able to finish it, and actually by the end—once I’d totally recalibrated my sense of what it could be—I was able to enjoy it on its own terms.  But that initial taste probably caused me to make a really bad face, like when you drink wine that’s turned to vinegar, and that’s probably why that good-looking woman at the bar dissed me so hard.  Maybe New Belgium can fix the recipe, or at least change the label to “Nestle Toll-House Chocolate Chip Cookie” or something.

Look, it’s no fun bagging on an experimental beer, from a socially responsible, solar-powered brewery I happen to like.  And it’s especially bad when they’re doing something good for the environment with their new product.  In a way I feel like this has been an evil review, and that because of my harsh honesty, our oceans may warm up even faster, and many species may die.  But I have a responsibility to the truth here.

Which is a funny thing to say, actually, because so much of this blog post has actually been completely untrue.  Yes, you read that right:  within this essay I have flat-out lied.  That whole thing with the woman at the bar?  Pure fiction.  The fact is, I don’t buy beer at airports because it’s a fricking ripoff.  I also don’t try to get the attention of women, other than my wife (and I know that if I’m looking to win her favor, beer isn’t the way to do it—I’ll build the FLÜNDTRAÄG she brought home from IKEA).  Moreover, the new beer celebrated by Spoon University isn’t even out yet.  If New Belgium has a test market for this beer, I’m not aware of it.

But don’t worry, not everything you’ve just read is a lie.  All those conflicting beeradvocate.com review snippits were real.  And the bit about the that Spoon article being widely forwarded, and lauded by the CEO as having produced a strong emotional response?  That’s 100% true (though you’ll have to take my word for it).  And my implicit point about these novelty beers being a gimmick (though a harmless one) does smack of some kind of greater truth, doesn’t it, despite my beer tasting having been fictitious?  I mean, when you and I do get around to trying this beer, isn’t it inevitable that we’ll come to this “nice gimmick!” conclusion one way or another?

Why would I lie?

So why would I lie like that?  Look, let’s get down to brass tacks:  with the modern media, and the blogosphere, and this new era of journalism, and Reddit, and all the sharing and re-tweeting and recycling that goes on, there’s really only one measure of success:  how widely read something is.  So I decided I had to go well beyond the “moment” that the Spoon article created.  What’s the first thing you’d google after learning of the existence of a new seasonal beer?  You’d want to know if it’s any good, right?  I suddenly had this opportunity to scoop everyone, just by lying!  So I took it!  And I’m not sorry!  After all, if you’ve made it this far into my post, you must have gotten something out of it.  Maybe you smugly enjoyed the pathetic tale of me (supposedly) striking out at the bar.  Or maybe, like me, you dread the ascent of beer from a basic working man’s beverage to something snooty and epicurean, and appreciate the satire.

And if you’re now smarting from having been led on, maybe feeling a bit foolish at your own gullibility, here’s what to do:  immediately forward this article to all your friends and tell them how great it is.  When they get to this sentence—the one you’re reading right now—they’ll know they’ve been punked—by you—and they’ll go punk their friends, and all this will create a global “moment,” and make me famous!  So go on.  Do it.