From the Archives - Urination Poetry

Once again, it’s a slow news day so I’m taking the opportunity to archive an old work on the mirrored web servers that host this blog.  And in the process I’ll provide the footnotes and commentary that a highly sophisticated literary work like this poem so desperately deserves. 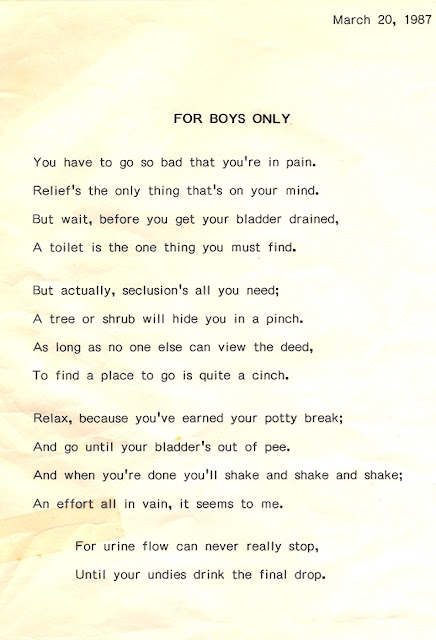 Title:  For Boys Only

This title just goes to show how little I understood females at age 17.  I probably thought they’d be totally grossed out by the way guys pee.  At this age I’m pretty sure I’d never heard a girl fart, and maybe hadn’t even heard one belch.  This was years before I knew a girl, in college, who was arrested for peeing in an alley.

An overly pedantic literary type might think I incorrectly used an adjective—bad—where an adverb—badly—was called for.  But that would be wrong.  To say “I have to go so bad” is a colloquialism I will defend to the death.  The only time I’ve said “so badly” is when my brothers and I were young and liked to say, “I have to pee as badly as Bradley.”  Bradley was a kid down the street.  I’m not sure it’s fair to hold him up as someone who had to pee particularly badly, but then we weren’t very fair kids.

Line 3:  get your bladder drained

I find this line alarming today.  Of course you drain your own bladder; this line implies that you’re having it done for you.  I wrote this sonnet long before I’d ever been catheterized or I wouldn’t have been so sloppy.  Of course the line would be better written thus:  “But wait, before your bladder’s finally drained.”

Line 4:  toilet is the one thing

More sloppiness.  I hadn’t really grasped that using a lot of one-syllable words makes the line of iambic pentameter stumble along instead of trotting gracefully.  And the word “must” is just plain wrong, as the reader is about to find out.  I should have written, “There’s something called a toilet you should find.”

For some reason, my use of “deed” in this line is one of my favorite things about this poem.  Perhaps it’s because it carries with it echoes of some truly great flatulence poetry:  “Whoever smelt it dealt it” and its rejoinder, “Whoever said the rhyme did the crime.”  Yes, peeing is not just something you do.  It is something of consequence that you boldly and deliberately carry out.  It is a deed.

I hate this line.  Poets should be banned from using the filler word “quite” and the filler phrase “quite a.”  I should have put, “To find a place to urinate’s a cinch” or “to find a place to micturate’s a cinch.”  Now that I think about it, “micturate” is probably funnier than “urinate.”  I don’t know why.  And you know what?  I learned something today while drafting this post:  the noun form of “micturate” is not “micturation” but “micturition.”  Microsoft Word didn’t suggest “micturition” but did flag “micturation” as wrong.  And then, once I corrected it, Word not only un-flagged it, but auto-corrected my next instance of “micturation.”  It’s like artificial intelligence!

Nobody over the age of ten says “potty” except parents stooping to a young child’s level.  It’s almost as bad as “pee-pee.”  Whoa, check that out!  You want to hear an amazing coincidence?  As I sit here writing this, I’m playing music—every track in my library in alphabetical order—and I just heard Eminem sing, “The way you move it, you make my pee-pee go doing, doing, doing.”  Small world, huh?  (By the way, that “doing” isn’t the gerund form of “to do,” but rhymes with “boing.”  Just in case that was confusing.)

So, yeah, the problem with “potty break” in this poem is that it doesn’t ring true to the way a teenager talks.  Sure, poetry is known for elevated diction, but not this poem.  By this point in my education I was already familiar with Keats’ admonition, “beauty is truth, truth beauty … that is all ye need to know”—and yet I wrote untruthfully here, in a sense, by using language that wasn’t true to my poem.  I could have worked just a bit harder and come up with something much better, like “Relax, because you’ve earned this little break.”

(Should I also criticize Eminem for saying “pee-pee”?  Well, I have to say, the song this line comes from isn’t one of his best.  And this very line earned Eminem some harsh criticism in The New Yorker.  Something tells me he got over it.  Myself, I’m going to let it go ... after all, Eminem was a high school dropout and probably didn’t read Keats until his forties. He was only 36 when he wrote “Ass Like That.”)

It just makes me wince to read this old stuff.  Bladder’s out of pee?  Like, what else would it be out of?  Grape juice?  Compressed air?  And this line suffers from my old addiction to one-syllable words.  I should have written, “Unburden your poor bladder of its pee.”

Do people still call underwear “undies”?  Doesn’t matter—as a teenager that’s exactly what I called them.  Beauty is truth!  It wasn’t until college that I heard “tight-y whiteys,” referring to briefs, in a derogatory way because of course boxers are the way to go.

(I just did a little extra research via my teenage daughter, who has never heard the term “undies.”  I asked her, “What do today’s teens call men’s underwear?”  She replied, “Boxers?”  I said, “What do you call briefs?”  She replied, “Gross?”  I can see I’m raising her right.  I hope she fully appreciates that guys are gross, period.)

I think the scourge of post-urinal drip is badly underrepresented in poetry, and I’m glad to do my part to right that wrong.  Ideally, this should have been an epic poem, not just a sonnet; that way I could have explored this issue in all its complexity.  How come I can go months without spilling a drop, and then I’ll have this drip problem like three times in a row?  What causes it?  Is it a nervous thing?  Will it get worse with age?  Is it related to why I can’t seem to pee without hitting the toilet rim?  Perhaps one day I’ll have more time and can explore this matter in depth.  Keep an eye out!