NOTE:  This post is rated R for mature themes and mild sensuality.

I needed a blog topic.  My younger daughter said, “Write a poem about your favorite chain lube.”  My daughter is pretty sophisticated in that she didn’t say “oil.”  So I decided to take her idea and run with it.  If you like poetry, and in particular sonnets, you may not care how quotidian my topic is.  Conversely, even if you don’t care for poetry, you may find useful advice here.  If you hate poetry and bikes, click here. 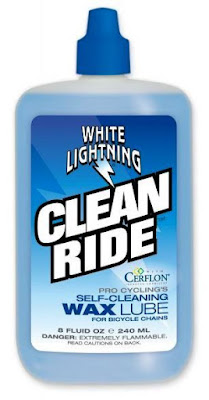 I think “Ode on” sounds much more literary than “Ode to,” as it hearkens back to Keats with his famous “Ode on a Grecian Urn.”  In researching this worthy literary source, I stumbled upon a poetic form Keats explored, ekphrasis, which involves a lavish verbal description of something concrete.  Intrigued, I delved further and discovered that the first example of ekphrasis in Keats, his poem “Ode To Psyche,” is based on the below sculpture, titled “Amor y Psyche.” 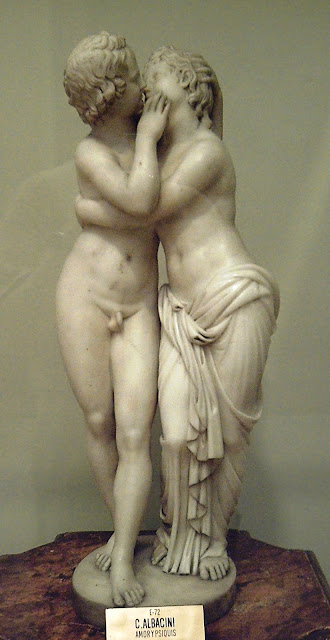 I find this sculpture alarming.  What the hell is wrong with Amor that, while making out with an attractive woman like Psyche, he is nevertheless completely flaccid?  And why does she tolerate this lack of enthusiasm?  It’s not like this guy is much of a catch to begin with; as the sculptor has plainly shown, Amor isn’t exactly Big Man on Campus.  I found this little research project so distracting, I decided I’d better abandon it, along with Keats, and just get on with my poem.

If dry chains didn’t squeak, probably nobody would ever clean or lube them at all.  But they sure do squeak, and certain users of bikes (I cringe at calling them cyclists) actually do learn to ignore it.  I was biking with my older daughter’s high school mountain biking team recently, and one kid’s bone-dry chain was squeaking up a storm.  I seriously considered handling this in the way my teenaged biking buddies and I did back in the day:  by spraying his chain with water.  This actually shuts it up for like 15 or 20 minutes.  Then it squeaks even worse and you have to spray it again; by the end of the ride the chain is orange with rust.  In the event I decided not to do this; instead, I just increased the pace until the guy with the squeaking chain fell off the back and eventually out of earshot.

I will confess, when you get a chain super clean, and then give it a light coat of oil or some other slippery lube (such as Tri-Flow), it really does look great, catching the light like a precious stone.  (I suppose I should have worked this into the poem, though there’s only so much I can do.)

Incidentally, speaking (albeit parenthetically) of Tri-Flow, here’s a bit of trivia:  when it first came out, it was called Tri-Flon, in reference to its containing Teflon.  Perhaps they were forced to change the name based on trademark violation, or maybe some big-wig just thought “Tri-Flow” sounded better.

Line 6:  lingerie you give a trophy wife

I’m not trying to be sexist here; just following up on the lame husband theme.  (Having worked at many bike shops, I can say that although most mechanics are male, females are also represented.)  The trophy wife notion is, I feel, a great way to convey the idea of non-sustainability.  Picture the recital of wedding vows of an old, bloated rich guy and his fresh, young, beautiful bride … at the words “as long as you both shall live” can’t you just hear people snickering?

This inescapable truth is almost universally ignored.  How often do you see a chain like one of these? 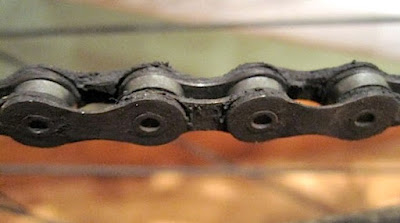 That first chain is dry and grit-encrusted from having been lubed wet and then neglected for a long time.  The second one looks to have been oiled more recently—i.e., it’s not been neglected per se—but look how much grit it’s picked up!  Disgusting.

So many people fall prey to the delusion that using a wet lube means they can skip servicing their bikes for 5, 6, 10, or 15 rides.  Yeah, wet lube lasts a long time, but the longer it’s on your chain the more damage it does.  Meanwhile, wet lube doesn’t just stick to your chain; it eventually coats all your cogs too, so stripping your chain isn’t enough.  You need to clean that gritty greasy crap from all your cogs too, and your chainrings.  Nobody has the patience to do this often enough.  And if anybody does, I pity him or her for all the time wasted cleaning off the grit that he or she attracted in the first place by putting oil on that chain.

What’s that?  You’re questioning whether a little grit ever hurt anything?  Stop for a second and think about what sandpaper is:  it’s grit, attached to paper!  Riding with a gritty chain is literally sanding away your drivetrain.  Cogs, chainrings, and chains would probably last longer with no lube at all than with a grit-trapping wet lube.

I’ve actually done this.  When my wife and I were living in San Francisco, pre-kids, we were out for a walk and, on a lark, stopped at a bakery and bought a slice of apple pie to go.  Descending a stone staircase, my wife spread her arms dramatically while announcing, “I need more pie in my life!”  Alas, she lost her grip on the pie, which went flying.  The Styrofoam clamshell busted open on the steps and the pie tumbled out.  I put it back in the clamshell and brought it home.  My wife refused to eat it, but I couldn’t stand to waste that pie.  The crunch of dirt and sand in my teeth was harrowing.  Perhaps this is why I’m so down on grit in my drivetrain.

Line 11:  though certainly a pain

Where wax lube is concerned,  you either swear by it or swear at it.  Some bike shops charge extra to service a drivetrain that’s been lubed with it.  The problem is, lots of bikers never strip off the old wax.  They just keep adding more, in adherence with the mythology that that’s all you need to do.  It’s not.  That stuff will build up until your derailleur pulleys look like an old bar of soap.  That said, at least wax buildup won’t shorten the life of your drivetrain.

To prevent this buildup, what you need to do is wet a rag with solvent (Coleman fuel is perfect) and drag it over the chain before adding the dry lube.  Periodically you should use a proper chain cleaning tool like this one and strip that chain completely.

The other problem with the wax lube is that you have to let it dry for several hours before riding your bike.  Lots of people aren’t organized enough for this.  Finally, this lube doesn’t last very long.  You have to apply it more often than a wet lube.

The plus side of a wax lube is that it doesn’t attract dirt or grit at all.  Check out this photo:  that’s my chain after a really muddy mountain bike ride.  (I hasten to point out that this was on a hard dirt trail that splashed up plenty of soupy mud but wasn’t that claylike mud that you make ruts in.  That is, I wasn’t causing erosion or otherwise hurting the trail.)  My jersey, shorts, helmet sunglasses, and face were totally mud-spattered, and look how much mud the front derailleur caught.  But look how (relatively) clean the chain is, especially compared to the earlier photos. 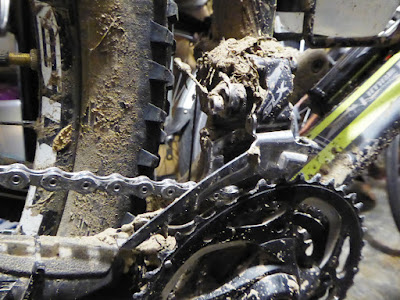 The chain is like the cleanest part of the bike!  That’s because as fast as grit is flung up at the chain, the wax flakes off and takes the grit with it.  Your cogs stay cleaner, too.

Not to beat you over the head with my analogy, but keeping your bike tuned up is a lot like being a good spouse.  Think about what you’re doing, stay on top of it, nip problems in the bud … very similar principles.  (Am I saying marriage is a pain?  No; just that it’s a lot of work, but also a pleasure when things run smoothly.)

It is true that a freshly tuned-up bike with a wax-lubed chain isn’t quite as pretty as one with a lightly oiled chain.  The dry wax lube has a dull, filmy look.  But you know what?  Life will go on.  And you won’t get black grease everywhere, like the rookie mark on your leg or chain prints on your car’s upholstery.  And your hands won’t get all black every time you tune up your bike. 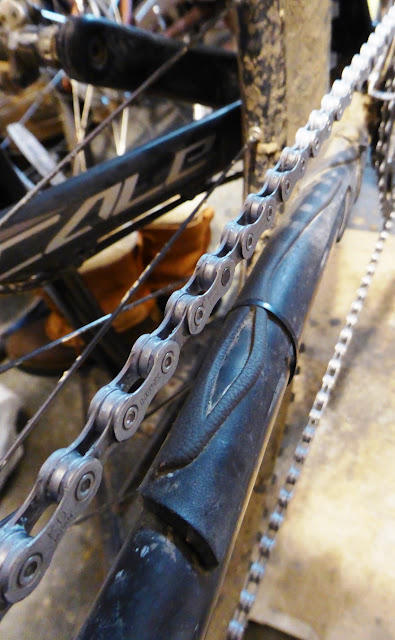 What?  Only a high-end bicycle demands a dry lube?  Shouldn’t all bicycles get the same treatment?  Ideally, yes, but I don’t kid myself.  My commuter bike—though lubed with the same stuff my best bikes get—is never maintained as scrupulously.  This is okay because a) I don’t put nearly the same mileage on it, and b) the cogs and chain are not only beefier—i.e., more forgiving—but also much, much cheaper to replace.

Is it normal to love your bike?  I wouldn’t know … having been a biking fanatic for decades I’ve lost touch with what “normal” even means.  But I will say that if you don’t love your bike, that’s completely okay.  I don’t love my commuter bikes, for example.  I think you have to really suffer on your bike before you truly bond with it.  To paraphrase the Coen brothers, “There's a spirit of camaraderie that exists between [you and your racing bike], like you find only in combat maybe, or on a pro ball club in the heat of a pennant drive.”

No, I have not received any payment or free product from the White Lightning people.  (I believe that bloggers are legally required to disclose any such support.)  This is one of my few brand loyalties, and they earned it fair and square.

I hope that somebody comments below to the effect that I’m throwing my money away buying a mainstream wax lube when I could easily coat my chain with cheap paraffin or something.  There was a photo essay of this process in Bicycling magazine decades ago, and not only did it look really difficult (e.g., melting paraffin on a stove), but an irate reader wrote in a month or two later complaining that he’d given it a try and started a kitchen fire!  I will acknowledge that White Lightning isn’t cheap, and must be reapplied fairly often.  That said, it’s waaaay cheaper than chains, cassettes, and chainrings.  Take it from me … a cheap bastard from way back!