From the Archives - Pushing the Envelope

Here’s a little something I wrote back in college. Looking back, I find it laughable that I’d thought the movie “Gleaming the Cube” would give society a lasting new cliché (i.e., its title). I never saw the movie, but people must have been talking about it and tossing around the phrase “gleaming the cube.” Boy does this movie look stupid. “Brian’s skateboard became his weapon,” the trailer declares, “in a deadly game of international smuggling, murder, and revenge.... When getting even means risking it all: gleaming the cube.” 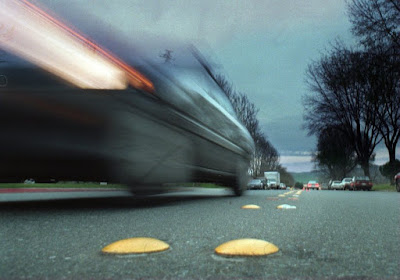 Modern cinema has popularized several great terms: “pushing the envelope,” “walking a tightrope,” and most recently, “gleaming the cube.” The latter has a specific skateboarding reference, but they all relate to one basic theme: living on the edge. Going to the very limit of safety. In short, pushing your luck.

I enjoy living my life according to this bold notion. No, I don’t climb mountains, or swim across channels, or jump in almost-frozen lakes bare naked. And I certainly don’t often push the envelope in a bicycle race. While many a criterium was won by the rider with the biggest balls, I’m not about to risk a handlebar in the ribs. However, I do enjoy taking risks that involve less physically debilitating consequences.

Here’s an example. Recently, I felt really lousy while on a training ride. So lousy, in fact, that the boredom of meager speeds was threatening to drive me stark raving mad. This was along US 101, a highway not offering any particularly interesting terrain. I thought about cutting my ride short, but that just didn’t make any sense. I mean, being out of shape was the problem here, and nobody ever got into better shape by slacking off. So, I pedaled on, and out of desperate listlessness, I decided to collect every single unbroken Botts Dot I saw. I’d bring them home, I decided, and figure out something useful to do with them.

[Note: my brother Geoff also collected Botts Dots, or, more specifically, Raised Pavement Markers, which are those cool road bumps that have built-in reflectors. We didn’t have these growing up in Colorado, because the snowplows would rip them up, but while in California we collected enough to line our basement floor with them back home. We glued them down, one long strip down the middle, and boy did it look cool. I cannot now remember whether, on this Santa Barbara bike ride, I was gathering plain old Botts Dots or Raised Pavement Markers. –Ed.] 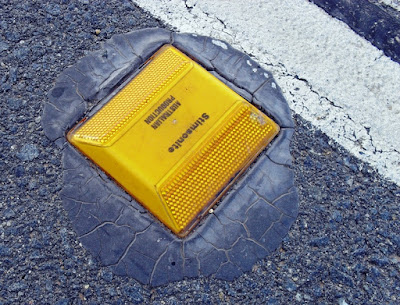 The project became more of a hassle than I had ever imagined, because I managed to find an amazing number of Botts Dots. What’s more, I was wearing an old-school wool jersey that didn’t ensconce the Dots very snugly. When the total number of Dots per pocket reached five or six, my jersey sagged badly enough that it threatened to drag on my rear wheel. Plus, I was trapped in the saddle because my jersey would snag on it if I tried to stand up.

Soon I found a cardboard box in a ditch, and carried the Botts Dots in that. It was slightly wet, very old, and the bottom threatened to give out at any time under the crushing weight. I knew that I would have to be crazy to trust the box, which is precisely why I chose to do so. Granted, the risk factor wasn’t as high as that of hang gliding, but if the box gave out I’d probably run over its contents and face-plant. In the end, I managed to avoid mishap.

Carrying groceries on bicycle handlebars is a favorite way, in my family, to gleam the cube. Geoff and I, when we lived in San Luis Obispo, used to compete: who could carry home the largest amount of groceries in one trip? (I believe I still hold the record: $80 worth.) Recently, while on a massive fridge-stocking mission in Goleta, about four miles from home across a freeway overpass, I discovered a shocking new challenge to bike-grocery-schlepping: the plastic bags, which have always been the sketchiest part of this activity, have become even thinner and flimsier.

I noticed this mere seconds after leaving the store. When I was only halfway across the parking lot, two bags burst simultaneously, sending tuna cans, apples, tomatoes, and onions rolling across the asphalt while I attempted in vain to stabilize the load. After bystanders (touchingly) ran to my aid from every corner of the lot, I took out the two spare bags I had brought along.

I assessed the situation: if those first bags didn’t even last fifty yards, how could I expect these backups to last for four miles? I decided if I had any brain at all, I’d go back into the store and get plenty of extra bags. But then that perverse envelope-pushing impulse crept into my mind, and I knew there was no way to stop it. A grin spread across my foolish face, and I mounted up and set off for Isla Vista with no extra bags.

Throughout the trip, I dodged every pebble in the road, every squashed bug, and every oil spot. When I reached the UCSB bike path, I knew I was in trouble. The path is wrinkled in some places, probably because of some really bad bike accidents. These wrinkles have the effect of a jackhammer on a fully loaded mountain bike with like 90 PSI in its tires. Almost instantly, two bags gave way simultaneously (they tend to go in twos, probably because of Murphy’s Law). The familiar produce dispersal ensued, and this time nobody rushed to my assistance. (I should mention that it was dark by now; naturally, I didn’t have a light.)

After collecting the goods, I put some of them into other already-full bags, and held one ripped bag together with my right hand. The left hand wasn’t free for steering either, because it was clutching the tiny top of a ten-pound bag of potatoes. So I could barely steer, and braking and shifting gears were out of the question. I guided my overburdened machine with my palms on the ends of the handlebars, each finger straining to the limit under with the tremendous weight it bore.

I kept reminding myself of what was at stake: I’d just paid dearly for that food; a lot of it was in jars; the produce would be crushed messily; and the dry spaghetti would be broken. Besides, one more bag failure would leave me with no means of carrying the surviving groceries. Somehow, I managed to keep it together until I was speeding through the bombed-out La Loma parking lot. Then, everything started failing at once. I flew towards my apartment, a ball of boy, bike, and groceries. It seemed my load was staying together only through sheer force of will. No sooner did I get the front door open, but everything rolled onto the floor of my apartment, miraculously unharmed. Not only had I pushed the envelope, but I had held it together after breaking it.

Yesterday, I engaged in this self‑inflicted phenomenon once again. My roommate had been whining hysterically about the four bags of empty jars which had accumulated in the kitchen as part of my recycling project. We also had a bag of crushed aluminum cans, and one of mixed paper. Alas, this whining roommate was the only one with a car, and also the only one unwilling to help recycle. The old bug bit and I had to prove to myself that I could get it all down to the recycling center in Goleta by bike. This being a tedious activity, I decided I had to do it in one trip. On my ride over there, I would be literally encased in glass.

I imagined the outcome of failure: “A 19‑year‑old UCSB student was killed today in a bizarre accident as yet unexplained by law enforcement officials. He was found buried in a mound of broken glass, with the bumper of an AMC Gremlin clenched in his teeth.” Or, “A UCSB student was arrested today by law enforcement officials for vandalizing Hollister Road. The youth was found breaking bottles there, and unsuccessfully tried to pass off his bizarre actions as mere accident.”

Okay, I’m exaggerating. The worst‑case scenario probably wouldn’t involve death or dismemberment, or even arrest, but it would surely involve a great deal of broken glass. But what alternative did I have? I filled my duffle bag and my big backpack completely with jars and bottles, and carried the cans and papers in bags hanging from the handlebars of my Miyata beast of burden.

To keep the duffel bag from swinging down into my rotating legs, I had to sit bolt upright and secure the bag with my right arm, leaving just the left hand to steer and brake. I comforted myself with the knowledge that in a panic situation I could dive for the right side of the handlebar. After about ten seconds of biking, the pain set in. My shoulders, arms, back, and even my toes began to ache. Soon, I was audibly groaning, moaning, and even whining. It seemed as though I’d never make it to Goleta. But as always, I somehow pulled it off ... which means I need to set my goal even higher next time.