In my last post, I lambasted modern razors, which are excessively expensive and fictitiously superior to what your dad or grandfather used to use. I should probably blog next on a completely unrelated theme, but I have stumbled onto another economic absurdity that is sticking in my craw. This time, though, I’m going to exhort you to possibly spend more than you may be now. 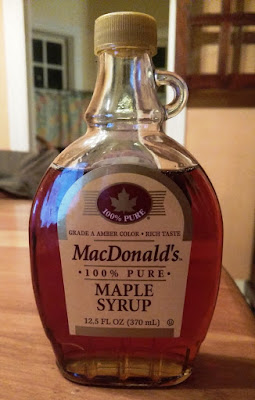 Grade A vs. Grade B

For somewhere around a couple hundred years, maple syrup—I mean the real deal, not that imitation stuff—came in two grades: A and B. Grade A was better and cost more. It’s the better product, that naturally rises to the top when maple syrup is boiled. Grade A syrup is to Grade B what cream is to milk.

Now, when I say Grade A is better, I’m not just basing this on it traditionally costing more money. After all, cheap razor blades are better than expensive ones, and cheap- to mid-priced Mexican restaurants are often better than the more upscale places (which are often just annoying). I’m basing my statement on having done a highly scientific blind taste test onsite at a maple syrup producing facility in Vermont back in 1994. Here is the result of my test, from the report I made right afterward:

[My wife and I] conducted blind taste tests comparing Grade A Fancy, Grade B, and our own Shurfine Imitation Maple Flavor Syrup [purchased for reasons of economy during an 8-month bike tour].  We both preferred Grade A, then fake, with Grade B coming in a distant last.  (After our Shur Fine ran out, we got some Maple Jack that's 20% real syrup:  that is, likely 20% Grade B, cut expertly in the lab by large corporations that know what tastes good.)

Here is photographic proof of this taste test: 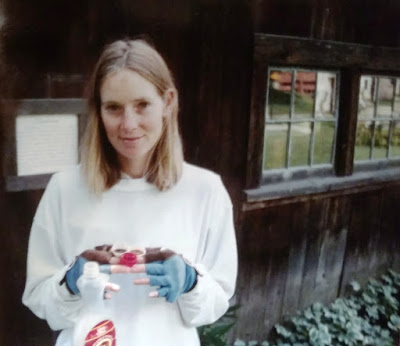 My report included this tidbit:

I’ve heard people say, “I’ve tried real maple syrup, and I prefer the kind you buy in the store that’s artificially flavored.”  My theory about this oddity is that those who prefer fake syrup had been served Grade B at a touristy restaurant.  It makes sense for a restaurant to serve Grade B syrup since it’s not only cheaper, but will impress tourists more:  they’ll say, “Wow, that’s so different, oh, yes, this is the real thing, we’re experiencing the real thing, oh my, what a fabulous vacation.”

In the last few years, however, Vermont—the top U.S. maple syrup producer—discovered that a lot of people actually prefer Grade B. Perhaps some of this is because it’s so obviously different from Mrs. Butterworth’s and Log Cabin. Maybe its stronger flavor just seems more authentic. Whatever the reason (and you can see the Appendix below for some theories), the Vermont maple syrup producers evidently realized they were leaving money on the table by using the phrase “Grade B.” Why admit something is inferior when you don’t have to? This brings us to….

The disappearance of Grade B

Last fall during a visit to my hometown of Boulder, Colorado I was shopping at an overpriced, Whole-Foods-y grocery chain called Vitamin Cottage when I discovered that their different grades of maple syrup were all called Grade A. One label said something to the effect of “formerly known as Grade B.” I asked the cashier about this but she was clueless. I decided it must be a Boulder thing. (My brother Max, who lives in Boulder, has always preferred Grade B syrup himself.)

Well, I’ve done some research and have discovered (click here for details) that Vermont has refined the gradation scheme for maple syrup. Now, all maple syrup is Grade A, even the Grade C stuff that wasn’t formerly available for retail sale (being used only in the manufacture of food). This scoring revision is a little like my daughters’ kiddie soccer teams that gave every kid a trophy, even the ones who never broke into a run or even attempted to kick the ball. Here’s a schematic showing the new nomenclature. 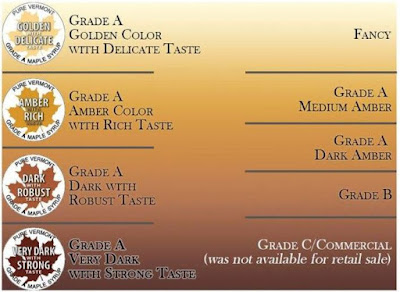 When you think about it, this just makes perfect sense. Why on earth would you badmouth a product with a derisive label like “Grade B” when you don’t have to? Why create a hierarchy that lowers the price of your lower-end product? I’ll bet the dairy industry is kicking themselves for using the word “milk” when they could call it “light cream” and charge more money for it.

But does the maple syrup industrial complex charge more for Grade B Grade A Dark with Robust Taste now? Well, it’s really hard to compare now, because not all manufacturers provide the complete label. Look at this stuff, which is as dark as crude oil: 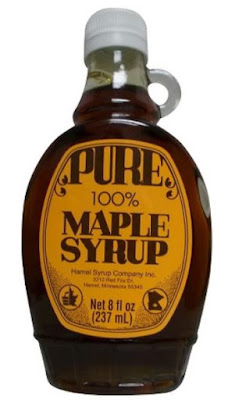 Its label says, “Grade A 100% Pure Maple Syrup (from the Sap of Maple Trees).” You know, as opposed to “from the Urine of Pregnant Beavers” or “from the Runoff of Feed Lots.” All those extra words about what “maple syrup” means, but they couldn’t manage to fit in the “Dark with Robust Taste” part of the label, or—more likely—“Very Dark with Strong Taste,” whichever of the two it is. This incomplete labeling is certainly deliberate and opportunistic; it gives them the ability to charge $9 for a 16-ounce bottle of what would be Grade B or even Grade C syrup in the original, non-muddled nomenclature.

When I try to compare two varieties of a single manufacturer’s product, I get nowhere. Looking at the Anderson’s products at Target, it appears the lighter and darker varieties cost the same, but I can’t be sure because it’s not clear how to put one or the other in your shopping cart. Looking at Amazon, I was totally buried in unhelpful labels and packaging options. Suffice to say, it’s no longer a straightforward proposition to get a lower-end product for less money. All has been obfuscated.

I’m sure it’s only a matter of time before other industries catch on and carry out relabeling campaigns of their own. Here are some examples of low-lying fruit:
Appendix – Is Grade B Grade A Dark with Robust Taste better for you?

Part of the popularity of the syrup formerly known as Grade B is that it’s been recommended for the “Master Cleanse” detox regimen, which consists of fasting except for drinking tea and lemonade made with maple syrup and cayenne pepper. The originator of this cleanse, a charlatan named Stanley Burroughs, advised in his self-published book that you should use Grade B syrup because it is “less refined.” (Charlatan? Yes. As mentioned in the MasterCleanse Wikipedia article, “According to the Harvard Medical School, the laxative component of the diet can lead to dehydration and electrolyte loss as well as impaired bowel function.”)

A self-interested purveyor of maple syrup, the Maple Valley Coop, promotes the Master Cleanse regimen and applauds Burroughs for recommending the syrup formerly known as Grade B, on the basis of it being less refined. But this other website explains that all grades of maple syrup are pure and unrefined. Can we trust this second website? Yep. My own tour of the maple syrup producing facility showed me that they produce all the syrup without adding anything … all they do is extract the sap and boil it. Here are the notes I took on this:

Tubes run directly from the trees to a giant storage tank, from which the sap trickles down (by gravity) to a giant open topped boiling tank that has many different maze-like channels in it.  The sap runs through the channels, driven by the current of the new sap flowing in, and by the time it makes it through to the final channel, it’s been boiled long enough that it’s the proper consistency and thickness of syrup:  that is, a gallon of it weighs 11 pounds (3 pounds more than a gallon of water!). Then, it’s separated into various grades by some process that was never explained to us very well  … something like fractional distillation, I suppose.  This yields the various grades, from Grade B (i.e., crude, and “suitable for cooking,” as they described it) all the way up to Grade A Fancy (the best).

Others have also claimed that Grade B is better for you. A website called “Nourishing Our Children” claims here that “The potency and richness of Grade B maple syrup amplifies its health benefits.” This is also nonsense; this Cornell University study concluded, “No research has demonstrated any differential health benefits related to this variation.” Meanwhile, common sense tells us that maple syrup is a damn condiment. Nobody should consider it a staple with which we nourish our children.

Speaking of which, I’m still a fan of the good stuff—the Grade A that has always been called Grade A—but you know what I gave my own kids when they were younger? Imitation syrup, like Log Cabin. Why? Because little kids are lame, and pour like a quart of syrup on a single pancake, leaving most of it behind on the plate. I refuse to waste my money on such behavior. Besides, they liked Log Cabin just fine—and why shouldn’t they have? I know firsthand it tastes better than Grade A Dark with Robust Taste.