From the Archives - Speech for Dad’s Memorial

I’m coming up on the one-year anniversary of my father’s death. It’s rough. The fact of his death is compounded by the flashbacks I have of his terrible, wasting final month. Time does heal all wounds, but first they scab over which means they bleed from time to time. I’m dealing with all of that now.

Here, extracted from my archives but still warm to the touch, is the speech I wrote for my dad’s memorial service. I know it well, because I had to rehearse it, out loud, half a dozen times just to get to where I could read it out without crying. (I’m not above letting people see me tear up, but blubbering to the point of incomprehensibility does nobody any good.)

If I seem a bit less than fawning in this tribute-cum-roast, it’s because I’ve listened to memorial speeches that were so dedicated to burnishing the reputation of the dead, they lost their essential truth. To a large extent this was the case at my grandfather’s memorial, except for my cousin’s loving but honest speech, which I well recall included the statement, “He could be difficult.” That speech inspired me to write something that conveys loving feeling but hasn’t been totally declawed.

I was driving my dad’s old Toyota Scion the other day, and it was down to half a tank. I’d filled it up when I was out here in early October, figuring I’d do him a favor. He’d be stoked (he would say “tickled”) to climb into his car and see the fuel gauge on full. It never occurred to me, at that time, that he’d never drive this car again. Things like that drive home the point: he’s really gone.

Of course I’m going to miss my dad—but this is not entirely new territory for me. I have, in a sense, yearned for more connection my whole life. When my brothers and I were kids, it was often hard to get our dads’ attention, unless we were in trouble. As adults, we weren’t really focused on him, either. Work, our own families, and geography got in the way.

But even as kids, when we all lived under the same roof, our relationship with our dad was less a matter of mutual rapport than of us boys being kind of in awe of him. Often it seemed his amazing intellect could be a barrier. An old friend of his from Ball Aerospace sent a nice note to our “Remembering Harry” e-mail box recently, saying, “[He was] intelligent beyond all description. He formulated a way to map the non-linearities of an instrument’s measurement plane with a Zernike polynomial making it possible to linearize the pointing accuracy of a line of sight steering mirror. His idea for using the concept of a Seaman’s signaling mirror to bisect the angle between two laser beams was the basis for an entire pointing and tracking program.” Reading this was a bit like hearing my dad talk tech, back in the day: I really couldn’t follow it. Growing up, the dinner table was like some kind of science & technology forum. Much of it was pitched at my older brothers’ level, though I’m pretty sure they were lost, too. 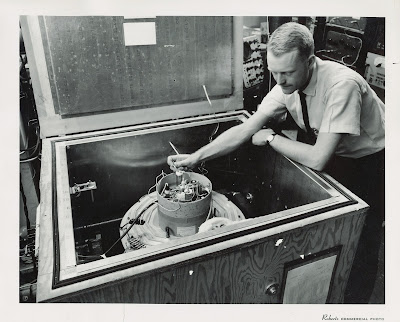 This isn’t to say our dad wouldn’t ever meet us on our turf. One weekend morning when I was 12 or 13, several of my biking pals flaked on me. My dad surprised me by saying, “I’ll ride with you.” So we rode up Flagstaff together. I pushed as high a gear as I could, out of the saddle, rocking the bike, slogging away slowly to be macho, while dad stayed seated and spun a high cadence—an engineer’s cadence, perhaps—next to me. Of course he turned the ride into a picnic, literally. At the summit we parked our bikes and walked out to Artist’s Point, and ate the odd creations he’d packed, like bagels dressed up with sardines, dill relish, and mayonnaise, and a half grapefruit.

[Here is his beloved Trek, which he rode on this ride. I’m pretty sure my dad snapped this photo at the summit of Flagstaff, probably quite near where we had our picnic.] 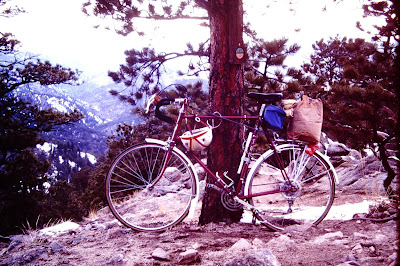 On the way back down the mountain I let it all hang out—I’d mastered all the curves by bombing this descent several times a week—and halfway down I heard this incredible scream. I looked back, expecting that all was lost, but my dad was still upright, just behind me, looking totally unflustered. “Not to worry,” he said, “that sound is just my brake pads melting.” I don’t know where he found the nerve to fake it on a descent like that, other than being hell-bent on keeping up with his kid.

Another surprise from my dad came during the summer of ’94, when I took my new bride, along with my brother Bryan, on a bike ride up Mount Evans. We weren’t very well equipped for the harsh conditions up there, which would have become a big problem, except that Dad unexpectedly showed up in his car when we were about halfway up. He had a lot of warm clothing and a big thermos of hot cocoa.

[Here we are maybe halfway up, before the temperature dropped.] 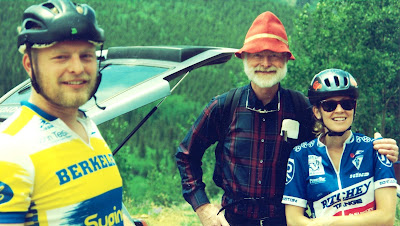 I felt this outing had brought my dad and me closer together, and so, remembering that 22 years later, I invited him along as the “sag wagon” when I took my daughter on her first bike trip up Mount Evans in August of last year. He happily obliged, following along in his Toyota Scion, with his good friend J— [not shown since I don’t have her permission]. 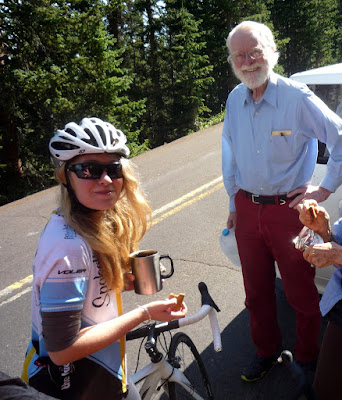 Dad made a picnic out of this outing, too, giving my exhausted daughter the most challenging sandwich of her young life: homemade bread, like particle board, spread thick with refried beans, ketchup, and—of course—mayonnaise. 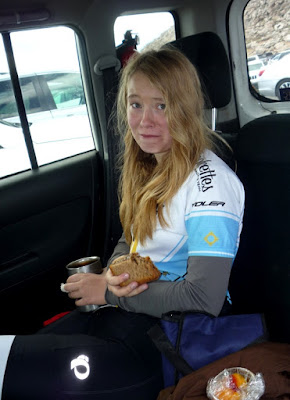 But so much of the time during my childhood, my dad was immersed in his own thoughts. The childish ideas I tried to share just didn’t tend to grab him. He was a bit like the archetypal “absentminded professor,” often pondering a mathematical or scientific abstraction, or the workings of the natural world. I think everywhere he looked, he saw these intricate mechanisms that just begged to be studied and fathomed. I suspect his profound intellect could be isolating for him, too. A character in a Vladimir Nabokov novel wrote to his wife, “A genius needs to keep so much in store, and thus cannot offer you the whole of himself as I do.” Was my dad keeping something in store? Hard to say, but I did find it hard to compete with whatever good solid engineering problem had taken root in his brain. Where mechanisms, science, and engineering were concerned, my dad always knew where to start, and how to proceed ... humans were always a bit trickier, and relationships could end up being the problems left unsolved. 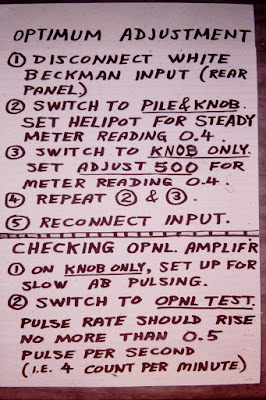 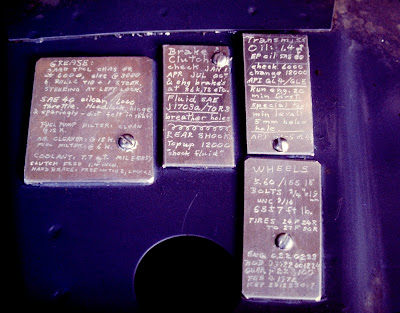 And so, with all this in mind, I’ve been gratified to see, over the last ten or twenty years, my dad expand his comfort zone and delve deeper into messy human stuff. I’m impressed by how social he became, how wide a circle of close, loving friends he had around him in his retirement. He developed a spiritual side completely at odds with the purely scientific approach he’d had as a younger man. He also described to me his (apparently willing) participation in activities I never dreamed he’d undertake: meditation, Buddhism, singing, even dancing. Dancing—man, I’d have loved to see that.

As I grieve, I have to remind myself that memory is fickle. When I look back on that high-speed bicycle descent of Flagstaff, and my dad glued to my wheel despite his brake pads melting, I recognize this alternate side of him. Even if he didn’t always nurture it, his capacity for reaching out and expanding that comfort zone seems to have been there all along.