Beck’st Spotlight - What Beer Goes Best With “Remains of the Day”?

Every once in a while, a Beck’st comes along that is so monumental, it deserves its own blog post. This is one of those times.

What? You haven’t heard of Beck’sting? What rock have you been sheltering-in-place under? Well, click here for my original Beck’sting post, which will tell you all you need to know about this global phenomenon.

A Beck’st isn’t just a photo, but a photo with a caption or other gloss, along with the dialogue a good beer snapshot inevitably elicits. I’ve included those, along with the initials of all involved. Where you see one letter only (e.g., “E—”) that’s somebody’s spouse, kid, or another friend.

Back in 1994, my wife and I did a cross-country bicycle tour. Along the way, we stayed for a couple of days with my friend DW and his wife down in Ventura. It was a great visit, the highlights being a) getting a gun pulled on us, and b) watching The Remains of the Day in the theater. Having a gun pointed at me was pretty exciting, but the movie bored the crap out of me. I sat there thinking, “When is this gonna end? And how can Anthony Hopkins’ character be so annoying and useless?” Frankly, I’d have bailed early, but I knew DW had really been looking forward to the movie. (Did I say “movie”? I meant “film.”)

So, we left, when it finally ended, and when DW asked how I’d liked it, I decided I had to come clean. I admitted I’d been less than gripped by it. So had E—, my wife. DW’s reply was something like, “Thank God! I was bored out of my skull. I totally would have walked out, but I assumed you and E— were enjoying it!” The Remains of the Day has been a running joke ever since.

DA: E— and I decided that it’s not enough to watch The Remains of the Day on demand via streaming platforms, even if that’s how all the cool kids do it. For a movie of this exalted intellectual caliber, we need a physical copy, just in case the Russians take down our Internet. I can’t wait to watch it again tonight. We might even watch it twice tonight!

P.S. Yes, the stemware is to add insult to injury. 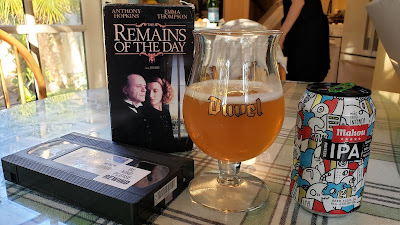 JL: I for one appreciate your dedication to the old and trusted, even if the new is more “convenient”! But my main reaction to this photo was the absolute certainty that that beer would taste so much better straight outta the can than in that silly glass! Now if you’ll excuse me, I must go and stream “Sense and Sensibility” on my iPhone via Netflix for the 172nd time.

DA: You’re probably right about the beer tasting better right out of the can, but the inconvenience of pouring it gently into the stemware glass without generating too much foam, and the added nuisance of having to hand-wash the glass later (since the dishwasher would over time damage the Duvel logo) together became irresistible.

DW: I love the graphics of the can. Loads of irony going on here. I am amused by how they are putting the slogan “Mas Intensa” on a session IPA. “More Intense” is not how I would describe a session IPA. Maybe it’s more intense than a Corona? The other irony that just kills me, is that you have a VHS tape of Remains of the Day in your household and, not only that, it clearly states “Be Kind and Please Rewind.” So you must have purposely forgotten to return it to the Blockbuster or other neighborhood movie rental store, paid the fines, or timed it perfectly when you knew the store was going out of business, so you could keep a copy of this great movie to show your kids and rekindle the past. I am impressed. I once read that Lady Gaga frequently watches Remains when she needs to tap into her creative stream. Well done, DA.

DA: You’re so spot-on about the can. It’s pure nonsense, really. There was nothing intense about that IPA (except the price, E— having purchased it at some chichi Spanish delicacy boutique). It’s the weakest IPA I’ve ever had, both in flavor and ABU (at a mere 4.5%, it makes even the watery lagers seem powerful). On top of all that, it’s not even 12 ounces! It’s 11.2, that being the American-market labeling equivalent of a third of a liter. Why didn’t they do a half a liter, which would be just over a pint? Because they hate us. They’re downright un-American!

We did end up watching Remains of the Day, over two nights. It was a special treat for this convenience-averse viewer because we hadn’t used our VCR in so long, the batteries in the remote had corroded, destroying the electrical contacts. I tried to fix it with aluminum foil, and though I was unsuccessful, the process was very engaging and absorbing, almost as much as Remains itself. As for the movie, all I can say is that the wisdom of age has made me ever more receptive to its subtle charms. Repeated viewing affords the cinephile the opportunity to imagine himself as the auteur, making subtle changes to actually enhance the film, or at least bring it into closer alignment with a modern audience.

For instance, consider the big scene where Lord Darlington, the English gentlemen of the estate (and of course Anthony Hopkins’s boss), has gathered the heads of state of western Europe together with a German delegate and is convincing them to adopt the appeasement strategy as their response to the Nazi regime. Christopher Reeve, the American delegate (and tycoon) gets up and gives a speech about how the people there are all perfect gentlemen but as politicians they are all amateurs and should leave this up to the professionals. A stirring speech, to be sure, which had me thinking to myself, “Amer’ca!” but then of course all the Brits and the craven Frenchmen et al totally disagreed, and in their very proper and gentlemanly way they basically kicked Reeve to the curb (or “kerb” as they’d have spelled it). As a viewer, and as an American—born American—I couldn’t really handle this scene. Of course great cinema is supposed to be unsettling, but still, this was a bit much to take. So I think a slight rewrite of this scene could have improved the movie, particularly for the patriots in the audience. Instead of clearing his throat and sitting back down, Reeve could have said, “You know, we’re just not going to accept that answer.” Darlington, being perplexed since Reeve was the lone American in the giant banquet hall, would say, “Excuse me, but ... what do you mean, we?” To which Reeve would slyly reply, “Me ... and Smith & Wesson!” Then he’d pull out his 44 Magnum [or 1930s equivalent) and escalate the peace process, if you catch my drift.

But of course the whole Nazi appeasement angle was just a side show, the real “action” being the fraught, eternally nascent relationship between Hopkins and Emma Thompson, the besotted housekeeper. There’s that utterly gripping and engrossing scene in Hopkins’ private study where he’s reading a book and takes pains to hide it when she arrives, and—perhaps because she’s besotted not only by Hopkins but by a few proper British 20-ounce pints of Mahou Màs Intensa Session IPA, or the 1930s equivalent (we don’t know what because the drinking occurs off-screen)—she pursues him about it, literally backing him into a corner, relentlessly repeating her inquiry as to the book, and then literally prying it from his fingers to discover that it’s just a banal, prosaic romance novel by some lowbrow hack (perhaps whatever that period’s equivalent would have been to Kazuo Ishiguro). Hopkins is flummoxed and embarrassed and assures Thompson that he only reads it to improve his vocabulary. She doesn’t buy this for a second and a charmed smile flits over her face as she recognizes this softer side of the starchy, staunchly professional head butler. It’s a very moving scene, but frankly I found it a bit too intense, even after repeated viewings. I know I should be stronger than that, and after all I knew what I was signing up for with this film, but still, it’s just so wrenching, like the emotional equivalent of a Hieronymus Bosch painting if rendered in dialogue, and I really think a touch of levity would do so much to bring the viewer back from the edge. So in my version the book would turn out to be pure smut, the 1930s British version of Penthouse Forum, so that we in the audience could have a good laugh. And Hopkins could say, “I only read this to improve my understanding of the coarse vernacular of the lower servants, so that next time the under-butler or a footman uses a phrase like ‘one-eyed trouser snake’ or ‘I came Lake Superior [or whatever large English lake would fit here], I should know to what he is referring.” Thompson could grin lustily and say, “I know better, you dog!” Then she’d stick her tongue in his ear, and Hopkins would finally get out of his comfort zone, gratifyingly arriving in ours.

When I woke up this morning, my first thought was, “I can’t wait until this weekend day is over so it’ll be evening time, and we can watch Remains again.” I even toyed with watching it as a matinee, but of course any sophisticated viewer of a fine film like this knows the viewing properly begins in the gloaming, so that when the movie has been fully savored it’s bedtime. But then I realized this movie was becoming an obsession. These are intense times for me, with COVID-19, my broken collarbone, an impending election, and several more Mahou Màs Intensa Session IPAs still in the fridge. I think I need to give my poor psyche some respite, and shelve Remains for a while. But I know myself too well ... owning that film on VHS is just too strong a temptation. I would be putting that tape back in right after dinner, telling myself I’m only going to watch the first five or ten minutes but knowing full well I’d be in for the full two-hour-plus journey. Cold turkey is the best way. So today, we’re going to take the videocassette out to one of those little “Free Library” community book boxes and leave it for some other lucky person to stumble across.

Will I be rewinding the tape? No! As you probably already know, “Be Kind - Please Rewind” is a ruse perpetrated by the Videocassette Industrial Complex to give video rental outfits an excuse to fine you for not rewinding. All VHS aficionados know that the tape is in a vulnerable state—much like anyone who has just viewed Remains—right after it is played, due to the heat from passing through the player, and can actually be unduly stretched out if rewound right away. This surely accounts for why this copy of Remains, like all of them surely, has been so badly damaged from repeated, same-seating viewings that the audiovisual quality is severely diminished. The picture is as blurry as a pointillist painting and the sound as muddy as your spouse’s stern lecture when you’ve got a pillow over your head. Not that this is such a bad thing, though … I think I’m going to miss the soft-focus warmth of VHS when I digitally stream The Age of Innocence this evening.