From the Archives - HAZOP Blues

Ages ago, before beginning the career I’m in now, I worked for a chemical engineering firm. That’s how it described itself, anyway. I never saw actual engineering take place; the day-to-day work was safety audits of refineries and chemical plants. It supposedly paid really well but I didn’t experience that firsthand.

What follows is a report I sent around via email, before blogs were a thing. This was almost before email was a thing … it was still pretty new and required me to plug my laptop (a prehistoric thing the size of a phone book—if you remember those) into a modem about the size of a pack of cards, and plug this into a phone jack in my hotel room. The bandwidth was 2400 baud, which was almost indescribably slow, as in 1/42,000th of what modern networks deliver. What’s more, you paid by the minute and had to be online the whole time you were composing your message, because it was a terminal emulator that didn’t support copy-and-paste. All this privation is surely why life expectancy was so much shorter then. It’s a good thing I lived through that dark period, so I can look forward to a long life ahead of me.

Okay, enough of this. It’s time to put up your feet, crack a beer, and enjoy this tale from my archives. It’s a sad one. 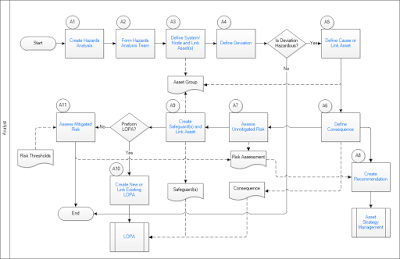 I’m in Pasadena, California recording a Hazard and Operability study, which is interesting only to the extent that I can understand it. (Which I basically don’t.) The HAZOP process is really about as pedantic an exercise as I’ve ever been through. A team of six or eight people from a variety of engineering backgrounds sits around systematically brainstorming potential deviations from the design intent of a process (in this case, a gasoline field in Colombia, which is supposedly the largest construction project in the world right now). The team brainstorms the potential consequences of deviations, what safeguards are in place, and whether or not recommendations need to be made to improve the safety of the system.

It’s not as exciting as it sounds. The only consolation is the food: top-notch restaurants, every meal. Fortunately the Doubletree hotel here has a gym; unfortunately I have yet to take advantage of it. Instead I sit here, in my glorious new paisley boxers, with the rush of L.A. coming through the window. Still my guitar gently weeps.

The HAZOP team here (among whom I sit, pounding on the keys like a court stenographer) is made up of three local engineers (one a mad-scientist looking guy; one right out of Dilbert; an Indian American; a sporty fellow from BP in England; and two Colombians). Over lunch (lobster ravioli with lemon cream sauce, $15.95), I talked to the Colombians about cycling. They were very enthusiastic and knowledgeable, and were thrilled that I remembered that Jose Patrocinio Jiminez won the Coors Classic in 1982, and that Luis (or was it Lucho?) Herrera won the KOM in the Tour. They speak very highly of Andy Hampsten. They knew about the fistfight that resulted in disqualification of two riders a few days ago in the Tour of Spain. They understand that small front wheels do not result in increased aerodynamics in individual time trials. Finally, I’ve found some common ground with these fellows, since I don’t have anything interesting to say about chemical engineering.

While working down here in Pasadena I am continually faking an attitude of enthusiasm. This constant façade is difficult to maintain, so I’ve decided to vent all over you.

I’ve having a very hard time with the sessions. I don’t understand the chemical engineering aspects of the HAZOP, so witnessing the brainstorming is about as exciting as waiting for my wife at the cosmetics counter. At least I get to sit … otherwise I’d suffer a severe case of museum knees. As it is, my hands get sore because I’m typing like a madman the whole time, with my computer screen projected on the wall via a nifty (and expensive) LCD datapad. This means the team gets to find fault with what I’m typing. It’s not that I make typos; it’s that I don’t actually know what words to type. Everybody’s talking at once and I lack the knowledge to successfully synthesize and combine all of their various thoughts. It’s kind of like a psychiatrist attempting to simultaneously analyze both halves of a split personality. Except it’s worse: there are six engineers on the team, comprising four different accents and usually about six different points of view.

The worst part is, when they recommend a double-failsafe trip on a check valve, I’m supposed to know what check valve it they’re talking about (UVV-493012-001, for example) and type the number into the worksheet. This is difficult because all I have to go on is a fifty-page, 11x17” Piping and Instrument Diagram that has about 1,000 valves on each page, the depictions of which would collectively fit on the head of a pin. 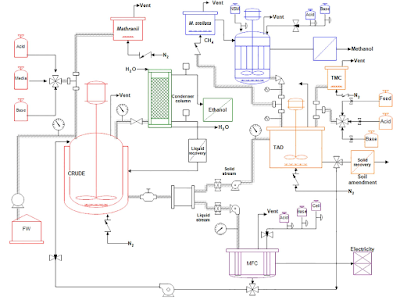 The end result is that I’m simultaneously overwhelmed and bored, which means I have a hell of a time staying awake. It’s just like college in that regard. Today my eyelids actually closed several times, each time for a dangerous and terrible one or two seconds. I may have to resort to double espressos if I’m to continue this for two more weeks.

I do derive some small solace from the hotel here, which is fabulous. I have a real furry bathmat, instead of just an extra-thick towel. Maria, my maid, leaves new bottles of shampoo and new soaps every day, even though I’ve obviously just pilfered the ones I already had. I left her a dirty shirt this morning with a note, and by the time I returned to my room in the evening, the shirt was cleaned and neatly pressed and returned to the closet, left hanging of a fine stout wire hanger that, like the soap and shampoo, I get to bring home with me. But that’s not all. The maid not only took care of my shirt, made my bed, and cleaned up my room, but she also got on my computer and repartitioned my fragmented hard drive. I tell you, the service here is fantastic.

Perhaps the best thing about this room is that the windows have giant wooden shutters that, when closed, are absolutely opaque. At night, the room is as dark as a cabin up in the mountains on a moonless night, which is to say, pitch black. This kind of darkness is about the only way I can really submit to an utterly complete and delicious sleep (a depth of sleep that I rarely even get at home).

Of course, this degree of submittal is very dangerous. I become so tranquil, and sink into such a heavy slumber, that almost nothing can awake me. However, if something does—for example, several cars outside my window defying the odds by backfiring simultaneously, or an anvil being dropped on the floor in the room above me—I do wake up. And when I do, I experience a sudden and terrifying shift from the sacred slumber to a state of alarm—head jerking back and forth, eyes darting around in vain for some kind of visual data with which to supply my information-starved brain. Basically, it scares the daylights out of me (a problematic metaphor, I know, since this happens in the black of night).

I bring up this awful phenomenon because it happened last night. I have no idea what awoke me, except for my own blood-curdling scream. The scream is an automatic part of the whole experience. The last time this happened at home was on the night of a power failure which rendered even San Francisco completely dark. I was awakened when a giant framed and glassed picture fell off the wall, hit the hardwood floor, and shattered into a million pieces. Although I woke up screaming, I had no memory of the sound, and no idea anything had fallen. (I do have a memory of my wife asking, when I’d finally stopped screaming, “What fell?” I was utterly bewildered. Something fell?)

This time was no different, except that I never did find out what initially woke me up. I just know that my own screaming scared the crap out of me.

I think you know full well how loud my voice can be, especially when I’m greatly excited; now imagine a scream. It would make Hannibal Lecter’s blood run cold. Perhaps what the most terrifying thing about hearing my own scream is that in a way, I’m a spectator to it; I don’t know why I’m screaming, but have a pretty good idea that I sure as hell must be in some kind of real danger to scream like that.

After the scream was finally over, and I was done shaking on the bed, spinning blindly in a black void, I gradually calmed down enough to consider the scream objectively. Then, I had the unsettling realization that the police could burst in at any moment to find out what was going on. I also was afraid to fall back asleep—and indeed, even in my greatly troubled psychological state I was quite close to complete unconsciousness—since whatever had awakened me, I feared, would repeat itself, and I would scream again and this time for sure somebody would come arrest me. It really ruined a good night’s sleep … sleep I badly needed before today’s HAZOP.

Today went exactly as I described above, except that I was extra tired, and the team was grumpy and argumentative. Somehow, I got a dumb old Journey song stuck in my head (“She took a midnight train going a-ny-where . . “) which only made matters worse. The breaks were also a drag because last night my boss checked his voice-mail and the last of his senior engineers had left a message announcing his resignation. (Such is the boon of high technology: you don’t even have to have a backbone anymore.) Well, that engineer had supposedly been my direct supervisor, the Group Leader, so his resignation is causing a shakeup in the company hierarchy, as can be expected. But what’s especially dismal about this shakeup is how half-hearted all the shakeup is: there’s simply nobody left to supervise here anyway. Our office now has a grand total of three engineers, including my boss. Of those three, my boss fully expects a certain one to quit shortly, leaving an absurd two engineers total.

This total engineer count is down from about ten when I started here, not all that long ago. I mean, we’ve always wanted a project backlog, but not like this! Now, we have all these projects (business was actually in the process of taking off) and no staff to do them. I expect to spend four hours tonight working on another project for another client, and tomorrow we have to drive down to Long Beach to meet with said client. It just never lets up.

I cannot tell you how relieved I am that I don’t have a chemical engineering degree. I’ll never have to step up and be one of the overworked engineers. The only other silver lining I can think of is that I get paid time-and-a-half for all my overtime, which means by the time this HAZOP is over, I’ll be ready to retire and buy a $6,000 house in Claflin, Kansas, where my wife and I can live out the rest of our days as clerks at the AM/PM Mini-Mart. If we save enough, we might even buy a carpet cleaning franchise and be bona-fide business owners. Stranger things have happened!

This tale continues here with HAZOP Blues II: The Spawning!