This year marks yet another when I didn’t ride the Markleeville Death Ride. It used to be too hard to get a spot, it being oversubscribed, but now it’s just too expensive. Almost the last time I did the ride was 2007, and this is the story I wrote for my bike team pals at that time. (I did return to the Death Ride with my teenage daughter a couple years ago … click here for that report.)

It’s time to report on the Death Ride. This year I rode with five other guys, though we splintered apart almost immediately so I won’t bother introducing the dudes who got all uppity and rode away to prove their dominance. Mostly I rode with my former UCSB teammates John “Cap’n Pelstar” Pelster and Dan “AAA-cell” Wolnick; the others were Dan’s pals from Bend, Oregon (aka Benders).

As usual, the Death Ride was all about the food. You know what they say, a mollusk travels on its stomach. This year the rest stops had miniature energy bars (why miniature? I don’t know!) which, being a bit hard to open, didn’t have a very high calorie-to-effort ratio. Also provided were [Brand X] gels. These were very handy but I can tell you with perfect sincerity that the flavor was absolutely revolting. (I won’t say what brand they were because this company sponsors cycling teams, thus I wish them well.) That people pay money for such a product is astounding to me, especially considering—and again, I say this in all honesty, our EBVC nutrition sponsor notwithstanding—that the [Brand Y] gels are downright yummy, especially the chocolate, which I’ve contemplated putting on ice cream in a non-athletic context.

You can see how insanely popular this ride is by this rest stop, visited after the first and second passes (front and back side of Monitor). 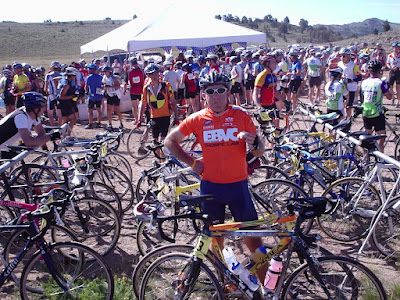 Of the trip of the third pass, the front side of Ebbett’s, absolutely nothing is known. I can neither confirm nor deny that there has been some kind of cover-up of this operation.

Here’s a photo from riding the fourth pass, that being the back side of Ebbett’s. 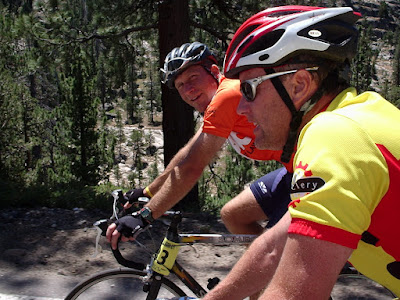 After coming back down the front side of Ebbett’s we stopped for lunch. This presented a bit of a conundrum. They offered a complete sandwich bar, which is pretty fun, but doesn’t provide the kind of food that exactly fuels you during exercise. I mean, ham? Pressed-turkey-lip-lunchmeat? Cheese? These are protein foods that can rebuild our shredded muscles, but rebuilding comes later, and we’re just trying to get the kinds of carb-centric calories that fuel the muscle shredding process. And yet, it’s a sandwich bar, which means you can choose whatever bread you want, and then put whatever you want on it. Irresistible prospect, that. Peanut butter and jelly on sourdough? Sure, if you’re that kind of lunatic! Ham, turkey, cheese, Doritos, and double lettuce on wheat? Whatever floats your boat! Now, this sandwich bar thing might not seem like a big deal to most Americans, but have you ever tried to get a proper sandwich in Holland or France? You have almost no options in such cases. In France you can have jambon (ham) OR fromage (surely you don’t need me to translate that for you?) but almost never both. If you do get both, it’s probably a tourist-centric place selling out to Americans, and thus crappy. Holland is even worse: they’ll lay out a really nice spread, so you could make a giant sandwich that would make Dagwood proud, but you’re not allowed to. It simply isn’t done—you’re only permitted to select one thing to put between the bread slices. If you add more, you won’t get arrested or anything, but you’ll get plenty of stink-eye, and your hosts will be ashamed of you. It’s like a trap. So as American patriots, we almost felt compelled to make big elaborate sandwiches simply because we could. And as financial custodians of our households, we also faced the classic economic motive: we paid for this ride, we should avail ourselves of every amenity! So we ended up eating big-ass sandwiches even though it seemed they could only slow us down. 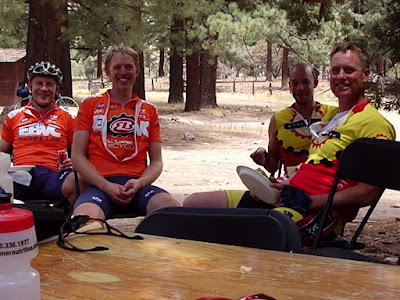 (I know, it’s a pretty blurry photo. I blame the kind bystander who offered to snap it.)

After lunch, while still trying to digest, we suffered the indignity of having to pedal up Carson Pass. Just getting to the pass proper is a seemingly endless process, and then Carson itself is a mother. In this photo, the place where the road disappears (up at the left edge of the frame) is pretty much the top. 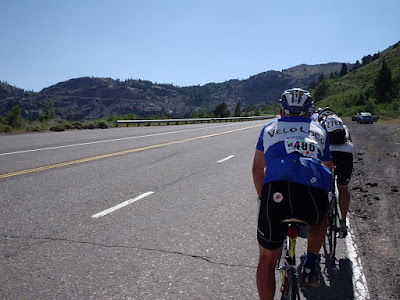 Of course, seeing the summit and reaching it are very different things. Just ask Rider #486. Oh, wait—don’t ask him anything! He’s completely crazy!

Well, that’s pretty much all there is to tell. Oh, wait, I almost forgot! There was  one other thing. At the top of that final pass, we got ice cream bars! There were no chairs to sit in, and sitting on the asphalt with no shade or anything wasn’t exactly civilized, but still—ice cream! With those little toffee bits and everything! Look how stoked we are! JP is practically smiling through that grimace! 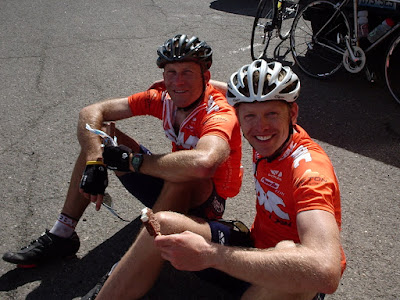 Which brings us to the thrilling climax of the adventure: dinner. This was included with the price of the ride and we ate it outside the ... well, I don’t know what it is, a structure of some kind with a kitchen. A clubhouse, maybe? They had picnic tables. There was a live band doing covers of actual rock groups, and as live bands go I would give them about a 6.5 out of 10 (6 being opera and 7 being a cat getting slaughtered). The band sang—I kid you not—“Total Eclipse of the Heart,” and rather than taking the obvious bait (à la Old School) of singing itironically, they sang it straight, which I’ll admit takes guts. They dispatched their task admirably, though I’m not sure you can exactly screw up a song that is so cloying, maudlin, and downright absurd to begin with.

But enough about the ambience. The food was typical Death Ride fare, the culinary philosophy evidently being “why waste good food on knackered bikers?” There was chicken. I’m pretty sure it was white meat. It was coated in barbecue sauce, though this sauce appeared to have been applied after the fact, possibly with one of those frosting dispensers pastry chefs use. I’m not quite sure how the chicken was cooked; it lacked the grill marks of having been barbecued but wasn’t all dried out as an oven would have rendered it. It was eerily tender (though not squishy and spongy like the perfectly cylindrical turkey logs I inherited from the ill-fated and ill-attended century ride that the UCSB cycling team put on as a fund-raiser, or more precisely fund-loser, back in ‘90). The chicken didn’t have a smoky flavor at all, so it couldn’t have been smoked; it may have been gassed. It may actually have been turkey, I’m not sure. The taste was mainly that of metal, though in fairness that’s not the food’s fault; pretty much everything tastes like metal after you’ve ridden the Death Ride.

There were beans. They tasted like baked beans always do. I suppose connoisseurs would argue that there’s a world of difference between Van Camp’s and Bush’s, and normally I would agree, but again, my mouth was not the as sensorially perceptive as a sommelier’s nose at this point. There was also an impressive array of salads: potato, green, and several versions of pasta salad. I avoided all but one of the pasta salads, because they all looked kind of creepy, like you could just tell the little noodle tubes would be limp and slick. The one I did try lacked the pleasant oversweetness that a product from the Safeway deli would have had, that derives its appeal from sheer nostalgia for the sneaked sample of the food that other people’s parents brought to picnics when you were a kid and your parents brought Wasa crackers and tinned sardines. The potato salad was bland, starchy, and eggless—in other words, perfect, as it filled a void in my stomach without causing me any messy spasms. The green salad was unremarkable, having like so many green salads been fabricated from recycled plastic milk jugs, except that it had cherry tomatoes. A regular tomato is so simple, it’s amazing that the agriculture industry has so thoroughly screwed them up (picking them green and hitting them with nitrogen for redness and then freezing and thawing them and somehow thoroughly insulting them until their guts are just mush) but I’ve never had a cherry tomato that was all that bad, so I was cheered to see them in use here. Also on offer were three different salad dressings, none of which appeared to have any chewing tobacco stirred into it, which was a nice plus. I had the Italian vinaigrette, which was neither Italian nor a vinaigrette but which was a perfectly acceptable lubricant for the salad.

There was a roll that worried me very much. It was the size and approximate shape of a giant apple fritter and I couldn’t imagine how I could choke the whole thing down, as my throat was all dried out from the arid air of high altitude and the 100-plus-degree temperatures we’d ridden in. But then inspiration hit: I sliced that bad boy in half like a sandwich roll and put my chicken and my cherry tomatoes between the two halves. This got me through the roll, and prevented me from having to try to cut the chicken with plastic flatware. It’s so easy to break the tines off a plastic fork doing that, and then to eat the tines without even realizing it. My blood plastic levels were thus largely normal (albeit slightly elevated from the gels earlier). Dessert was pudding, which I skipped because I’d already ingested a couple gallons of energy drink, countless cookies, etc. during the ride.

Instead of drinking yet more Cokes so we could stay awake for the drive home, we actually camped another night because the Benders, having a much farther drive ahead, had secured a campsite and brought all the necessary gear. A couple of the guys even found a hot springs to visit but the rest of us were too lazy to partake. We all chatted (and also argued) around the campfire for a while, had a beer or two, and called it a day. We might have even called it a good day. Which I think is about right.