When I’m staying in a motel and they have a Keurig machine, my first reaction is positive—as in, oh good, it’s not going to be one of those terrible little no-name coffee packets that’s like a giant tea bag and brews a terrible brown liquid that is barely coffee. But then when I actually use the Keurig, I’m reminded of all the ways I find it annoying … and that’s even before number nine on the following list has happened (or when it doesn’t). Here is my top-ten list of why Keurigs are annoying, followed by a little surprise! 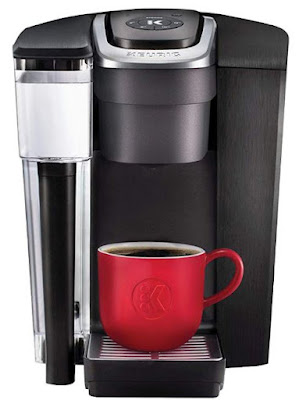 I just bought Melitta #2 cone filters recently, in a pack of six boxes with 100 filters each. And in doing so, I thought (with a gasp), “Didn’t I just buy 600 of these fairly recently?” Well, it’s not so bad because it was actually last October (and yes, I know this because I bought them from Amazon, so sue me). Besides, these are all non-bleached, brown (aka “whole wheat”) filters, and I composted every one of them after use. So I’m not doing so badly. But imagine what 600 spent K-Cups would look like, dotting a landfill. Pretty depressing.

As documented in this Atlantic article, the inventor of the Keurig machine and its K-Cups now regrets he ever come out with it, and doesn’t use a Keurig himself due to the waste. As of 2015, 13 billion used K-Cups went into landfills every year. As of 2020 the company claimed to finally have a fully recyclable cup, but only if you were willing to separate the plastic, paper, metal, and coffee grounds. As the Atlantic put it, “A Venn diagram would likely show little overlap between people who pay for the ultra-convenience of K-Cups and people who care enough to painstakingly disassemble said cups after use.” Keurig—and this was long overdue—has recently made this process easier but they advise to “check locally” as the cups are “not recyclable in all communities.” I kind of doubt many users bother. And even if they do, recycling still requires energy; it’s never as good as composting. And all this waste is for what? Saving the effort of brewing coffee because it’s so, so hard? Would this product be as popular if it were branded Fisher Price Baby’s First EZ-Brew Coffee Station?

Which brings me to my next reason…

Keurig sounds European, and it’s supposed to. As in, the idiot-proof operation and wastefulness is okay if it’s European and sophisticated. The full name of the company is Keurig Dr. Pepper, and it was formerly known as the Dr Pepper Snapple Group. So it’s as American as sugary soft drinks and that undrinkably cloying non-tea. Further proof of its heritage is that you can “brew” blueberry, caramel vanilla, and even French-toast flavored beverages, which is as grotesquely American as Starburst “fruit” chews. The Euro name really kind of insults our intelligence, doesn’t it?

A nice stovetop or electric kettle is compact, looks great, and has multiple uses beyond coffee, such as making tea, pre-heating your thermos, getting a head start soaking a pan or your stovetop … you get the idea. Here’s a picture of the kettle I use (or more specifically, of the one I bought for my brother, and his reaction to it). 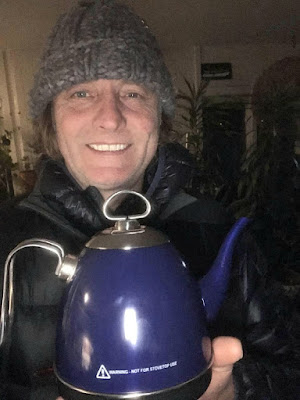 Like so many kettles, it’s easy to pour from due to the perfectly designed spout (which, by the way, cools water to the perfect temperature for brewing coffee or tea). It’s a marvel of minimalist engineering.

A Keurig, on the other hand, is totally lame: it’s large, hi-tech-looking, plastic, and does exactly one thing, which is to prepare a single serving of coffee (or artificially flavored offshoot) for one person in one size. Which brings me to…

Half the time I make coffee, it’s for two. I do pour-over drip coffee so we’re talking two mugs with two cone filters, side by side. (My wife does half-decaf, or else I’d just do a Chemex carafe.) This small act of thoughtfulness is part of why we’re still married after 28 years. And when I have houseguests, rising early and brewing a big batch of coffee for everyone gives me, and them, a simple pleasure. Now imagine you’re somebody’s houseguest and you wake up to the delicious smell of brewing coffee, only to make your way into the kitchen and discover your host only made it for himself. “Keurig’s on the counter,” he says from the next room. You dig through a basket of K-Cups looking for one that isn’t “Vanilla Skyline” or “Maple Sleigh” flavored, and get to work making yourself a cup. Sure, you’re glad to have coffee, but isn’t this so much less gezellig? Needless to say, gone are the days of having somebody come refresh your cup here and there. It’s every man for himself with the Keurig.

Reason #5: leads consumers further down the path of convenience addiction

The Keurig inventor, explaining why he no longer uses the product, concedes that “it’s not like drip coffee is tough to make.” Until about 2008, making coffee the old way was just not a big obstacle for people. But a lot of Americans are fricking lazy, which is why about one in three American homes now has a Keurig machine. Keurig is as guilty as the microwave popcorn industry in this regard. If you train consumers to believe that all manual effort is to be avoided, the Keurig is what you get. If Keurig made food it’d be Cup O’ Noodles.

I was disappointed when I saw that my favorite coffee roaster, Peet’s, had capitulated and started selling their product as K-Cups … but then, Peet’s is pretty mainstream at this point. But what about these smaller roasters who are fair-trade, environmentally focused, all-organic, and probably more responsible in ways I don’t even appreciate? Now they have to compete with a product whose gross waste (see above) is fundamentally incompatible with their brand and operation. I’d rather not give these smaller outfits another disadvantage in trying to survive.

Meanwhile, I’m not an expert on coffee or anything, but I’m assured by all my coffee-aficionado friends that the best cup of coffee comes from beans that were ground to order. In other words, coffee stays fresher when purchased as whole beans. Obviously this isn’t an option with Keurig. They put ground beans in the K-Cups and vacuum seal them with nitrogen, which seems like a less effective (and creepier) freshness strategy.

This is probably the toughest assertion for me to support, but did it ever seem to you like inserting the K-Cup into the Keurig’s jaws and them shoving them closed is a lot like chambering a bullet in a rifle? Does this remind you of the little magazine of blades in a Gillette Sensor razor? Isn’t it kind of sad that insecure men, when using an idiot-proof product like this, are reassured by these transparent appeals to their masculine vanity? A real man uses a proper double-edged razor and will happily disassemble and troubleshoot his coffee grinder if it ever gets jammed. (And you thought the disposable K-Cups were the only imitation of the so-called “razor and blades model” that Keurig stole from Gillette and their ilk!)

As described here, some years ago I searched really hard for a kettle that didn’t have any plastic, because I don’t like the idea of all that heat and all that plastic getting together for my twice-daily coffee ritual. Sure, the links between plastics and health problems are not fully understood, but why take any risk? K-Cups get really hot during brewing. On the off chance this isn’t good for you over time (e.g., over perhaps 700 cups a year), why not play it safe? (I’ll note that my current kettle, made by Chantal, is completely plastic-free. So is my mug. And my spoon.)

When a Keurig works right, its operation is very simple: jettison the spent K-Cup (like an empty shell, per #7 above), load and chamber the new one, pour in the water, place the mug, and press the button. But have you ever had this sequence disrupted? I have, quite recently. I discarded the spent K-Cup, slapped the new one in there, poured in the water, and then discovered the Brew button wasn’t lit. The Keurig wasn’t plugged in! Because my wife and I were staying in an old motel with very few electrical outlets, she’d borrowed this outlet to charge her phone. Now what? Well, if this happens to you, here’s what to expect: ten very frustrating minutes from now, you’re going to have water all over your counter, water remaining in the Keurig machine, four wasted K-cups, and two cups of screwed-up coffee—one impossibly strong, the other impossibly weak. Um … somebody refresh my memory as to why traditional brewing is so inconvenient?

I generally work from home. In the afternoon, usually around three when things have quieted down, I like to take a coffee break. I fill my kettle, start the water heating, and then set about grinding the beans, with a quiet, compact hand-powered burr grinder. This takes a few minutes, almost exactly as long as it takes for the water to boil. Then I place the filter in the pour-over cone, pour in just enough water to wet the beans, and then wait a little less than a minute before proceeding to pour water over the entire cone, slowly moving the kettle spout about in a circular motion per the established best practices of the pour-over method. It’s a calming, mildly absorbing, and pleasant ritual, and it takes some time—meaning I actually get a break from work, which is half the point. Why eliminate this? Is it always better to spend just twenty seconds with your stupid plastic machine, go back to your desk, and then fetch the coffee a couple minutes later? From the standpoint of work-life balance this strikes me as the beverage equivalent of eating a Cup O’ Noodles lunch at your desk while working on that spreadsheet some more. Lame!

And now, the surprise!

I know this has been a pretty negative post, and I also know that that in general we could all use some more positivity in our headspace. With that in mind, I’m thinking of implementing a new conversational rule with close friends and family: if somebody waxes negative, they must then shift gears and make three positive statements, such as things they’re grateful for, etc. This will keep us all from getting down and/or cynical. So, I’m now going to offer my favorite three things about coffee: