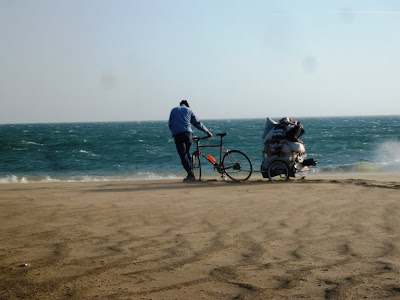 Before you leave for the camping trip, slice the tomatoes, pickles, and onions. The pickles will need slicing because they’ll be the whole-cucumber kind, and good ones. The onions should be sliced so thin you could practically read through them. This guideline always applies, but especially when you’re camping, and overconsumption of raw onions goes from “annoying” to “dire” within the confines of a tent. (Slicing these things ahead of time might be the one thing you get right on your camping trip.)

This is a great recipe for that first night at a hike-in campground when you’re exhausted and it’s totally dark by the time you get your tent set up. Say, for example, you tried to use a bike trailer but didn’t know that half a mile of the 1½-mile hike is along the beach, where a fiendishly strong, cold wind is blowing and the deep sand makes it almost impossible to push the bike along (much less ride it), and suppose also that the trailer breaks before you get to the trail and it takes another hour to drag the lurching, tipping thing to camp, and that you left the headlamp in the car and can’t really see what you’re doing, and that the wind is howling through the campsite, blowing steel plates off the table, and from the tent your children are whining about the cold and one says, “All my memories of this trip will be negative.” This is a perfect night for burgers tartare.

Separate the ground beef into six balls and smash them angrily into a large frying pan. Ignite a burner on a large heavy Coleman camp stove, setting the flame so that the burner gasps and wheezes. As the burgers cook, dink with the stove a lot, pumping more air into it and wondering what the hell is wrong with it. When by dim flashlight you can see that the patties have shrunken a bit, tear a roll in half and submerge it in the fat in the pan. Eat this. Assemble the rest of the burgers , not forgetting the condiments. (Note: it is never okay to serve a hamburger without sliced tomatoes, onions, and pickles—no hardship excuses this.)

Halfway through your first burger, shine the flashlight on it and note how raw and red the beef is beyond the thin membrane of cooked exterior. Note also that your entire family is making yummy noises. Finish this burger and eat another. Delicious. You have introduced your family to burgers tartare. (Ssssh, don’t tell!)

This is a handy variation on the traditional s’mores recipe. Obviously, the enduring popularity of the s’more stems from its alignment with the slow food movement, but nutritionists are now questioning the health effects of charred marshmallows and dirty sticks. Meanwhile, our global warming crisis has become sufficiently dire that environmentalists are now becoming critical of that favorite camping institution, the campfire. Not sure where you come down on this one? If it’s too cold to even think about gathering firewood, and too windy to light a match, and too dark to see if your campsite even has a fire pit, the decision is obvious—but just try telling your kids there won’t be any s’mores.

Preparation couldn’t be simpler. Thrust a graham cracker, a square of chocolate, and a marshmallow into the hand that extends greedily from the tent. Enjoy.

One of the challenging things about camping is that even if you thought you brought enough supplies to sink a ship (or break a bike trailer), you’re bound to have forgotten something. Say, for example, maple syrup. Voilà! A new recipe is born.

Prepare the pancake batter according to the directions. Oil the pan liberally. If you run out of fuel halfway through the first pancake, no problem—you are now actually glad you schlepped in that extra gallon can of fuel. Feed the botched pancake to the raccoons and start over.

After flipping the pancake, break some pieces off the chocolate bar and place them on the top. When the corners of the chocolate pieces start to get rounded and the text of “HERSHEY” begins to warp, serve the pancake. (Click to enlarge photo.) 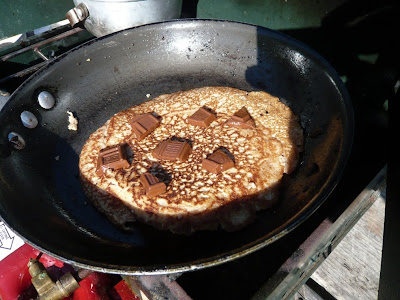 Instruct the eager diner to spread the chocolate around with the underside of her fork. Exquisite.
Posted by Dana Albert at 8:20 AM