Every year at tax time, and of course at other times as well, we hear about simplifications to the tax code. I’ve generally assumed these were a ruse for the rich (damn them) to pass more of the tax burden on to the likes of me, and I’m all for adding a few new line items if I can save a bit of money. But this year I finally came around and have thought of several improvements to the code.

The software should be free, and it should be made by the WordPerfect folks in Orem, Utah, who wrote the last software of any kind that actually worked. Tech support should be live, and free. I had a problem with my Intuit product this year, and was astonished, and then immediately thereafter totally resigned, to learn that their tech support is e-mail only and has a 48-hour turnaround, which is absurd for a) any Californian (state motto: “we don’t have time for this crap”), and b) anybody waiting until the last minute to do his taxes (i.e., everybody). My e-mail to Intuit included the sentence “I am livid,” which is usually a sign that a company has earned a lifetime boycott by me.

To describe how the IRS software free tech support should work, I’ll cite a real-life example: my own phone call the other day to Electrodyne, makers of a modem line tap I occasionally use at work. To give you an idea how outdated this instrument is, the “high speed” version goes all the way up to 2400 baud. (Note to Homeland Security blog eavesdroppers: a modem line tap isn’t as sinister as it sounds. It’s no more dangerous than a TCP/IP sniffer. Now go look up “sniffer” on Wikipedia and stop bothering me.) I went to the manufacturer’s website because I feared I had the wrong power supply for my instrument, and within moments found a toll-free number listed. A guy picked up on the first ring, and he sounded like just the kind of crusty old veteran who could be of great help, which he was. “I’ve got a 2400A modem line tap and I need to know the current for its power supply,” I said. He didn’t even take time to scratch his head. “That will run about 800, 900 milliamperes,” he said. (You think Microsoft is that savvy? Huh. Their spell-check dictionary doesn’t even have “milliamperes.”) I told him what I had (700 milliamps), and he asked the voltage. He said I’d be fine. Done. IRS: take note. This is called customer service.

Unfortunately, on the day I finished my taxes, which was not coincidentally April 15, I’d had a hard workday, squinting at my modem line tap output on another venerable device, the Navtel datascope. The Navtel is more reliable than, say, a modern Blackberry, which due to an inscrutable user interface did a unilateral spell-check substitution recently such that I accidentally e-mailed a colleague to ask, “Do you still have a navel?” Fortunately, she was cool about it. 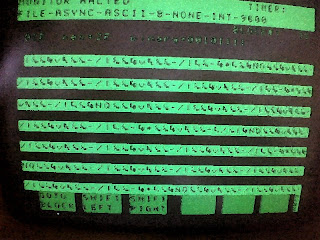 The Navtel’s screen is small and blurry to begin with, and the data on it very hard to decipher. I’ve added some extra blur to this picture to show you how it looked to me by 4:30 p.m., and because there could be sensitive data on there. (Note to Homeland Security blog auditors: see? Totally illegible. Now go bother somebody else.)

So anyway, I was already mentally fried when I went to finish of my last-minute tax effort. I managed to pull everything together, only to not have any luck finding an envelope. I looked everywhere, becoming increasingly annoyed. I finally decided to stop at Safeway on the way to the copy shop and get some COM10s there. Why was I even having to do this? The IRS should send us self-addressed stamped envelopes, and serve refreshments. My sense that this should be so only increased when I got to Safeway and discovered they don’t even sell envelopes. You can buy a three-hole punch there, and thirty different kinds of toothbrush, and chemical products for the home that probably shouldn’t be allowed to exist, but no envelopes. I’m this close to boycotting them for life.

On April 15, the government should subsidize tax return photocopying at copy shops nationwide. This would reward good corporate citizens like me who don’t do their personal photocopying at work. Now, I know it seems petty, me complaining about the $1.96 I spent on two envelopes and fifteen photocopies, but it’s not about the money. It’s about the time. I went to a small family-run copy shop, and they couldn’t make change from my twenty. (I’m not quite shameless enough to put $1.96 on my Visa card.) The register drawer didn’t have any fives or tens, and neither did the cashier. The owner, or maybe it was her dad, didn’t either. The manager, or maybe her uncle, finally dug out his wallet and produced the missing bills, and I was out of there in under ten minutes. But just under.

Okay, the IRS is a government entity, as is the US Postal Service, and they work hand-in-hand to supply tax forms and accept completed returns. Why don’t their websites support each other? The first thing you see on either website around tax time should be a field where you type in your zip code (which surely usps.gov knows all about), so the website can tell you the hours, on April 15, of your local post office, and the location of the nearest post office that’s open late. I thought about rewriting the tax code such that every post office in America is open late, but that might bankrupt this country since every town in America, including Oscuro, Colorado (population zero), has a post office. Anyway, I wasn't exactly in a rush to get to the post office, figuring it would be open late, this being Tax Day and all.

I showed up at my local post office branch at exactly 5:01 p.m. Imagine my delight when I was greeting by a uniformed postal employee at the door. Coffee, sir? Doughnut? Now imagine my crushing disappointment when I learned that he was standing there simply to bar me from entering. He told me they were closed. I said I just had two envelopes to drop off and could he please, please take me in? His reply? “Sorry, we can’t. There’s only one guy working back there.” I almost pointed out that there would actually be two guys working back there, if he’d simply lock the door behind me and report to his post, but I’ve learned never to try to reason with government employees, at least the kind who interface with the unwashed masses like me. At least I got him to tell me where the closest post office was that would still be open.

So that is how I spent an hour and a half driving around the tangled headphone cord of highways that tie Albany and Berkeley to Oakland, and within the screwy yarn-ball of Oakland itself. Of course I got lost, totally lost. I’m hopeless to begin with, even when I haven’t spent a day staring at network protocol violations and have had my anger turned up to 11 by a postal employee. While I drove I had to listen to a radio report about how Obama has vowed to simplify our tax code. I hope he reads this blog.

When I finally reached the post office I didn’t even see it, because it was just too huge for me to make out, like an ant trying to identify an elephant from an inch away. I blew right by, as I only eventually discovered. When I got to the port of Oakland and the giant cranes that inspired the Imperial Walkers in “The Empire Strikes Back,” I turn around and headed back. (Otherwise I’d have ended up in the Pacific Ocean.) On the return trip I spotted the post office by the protesters out front, whom I considered running over with my car. How idiotic is it to protest taxation, when your audience is here to get tax dollars back?

I suppose if I were really clever I’d recommend a tax code enhancement that would keep me from getting lost, but I’m not that clever, and it’s been a long day.

Tax Day could be a really fun experience for Americans, almost like Cinco de Mayo or Carnaval, if the government made a little extra effort to liven up the post offices where so many Americans drop off their tax returns. At first I thought this was what they’d done, as a nice spread of coffee and pastries was set out on card tables, but this was only for the extra employees they’d hired to stand alongside the road and accept envelopes from passing motorists. (Yes, California is the king of the drive-thru.) Standing in the long line, I wished for something to break the ice among all the taxpayers. Music? A live band? The Las Vegas airport has a nice take on the boring security checkpoint video: they made their own, with real, famous actors and Vegas performers, some in silly costumes. The IRS and the Post Office could team up and make this American Tax Day institution more like a happy hour.

The highlight of my wait was when a woman came and asked if this was the line for dropping off tax returns. During my snottier teen and college years, I’d have been tempted to deliver some witty and rude comeback designed to convey what I’d have felt was the stupidity of her question. Instead, I basked in the realization that I’m not actually the most hapless person on the planet. This more modern reaction is called wisdom.

There was actually one other guy there who was less savvy than I. He was wandering around asking people in line for the address to mail his tax return to. (See “SASE” above.)
Posted by Dana Albert at 10:59 PM