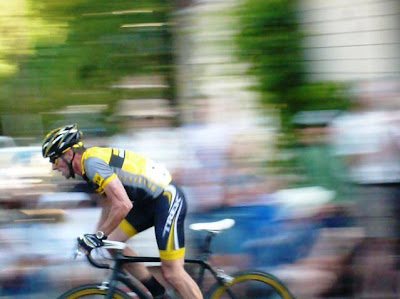 What is Daily Peloton?

Before I started this blog, the only writing I did for a non-personal audience was the occasional article for the Daily Peloton (http://www.dailypeloton.com/), an online magazine of pro cycling news. I don’t often see big races in person, so my stories are generally at the outer edge of what the dp audience is probably looking for, but cycling is something I enjoy writing about. That said, I hope you can see from this blog that cycling is not the focus of my life. Since Daily Peloton has no use for articles about mud baths, computer keyboards, the destruction of perfectly good cars, or children’s books, this blog made more sense as an outlet for my writing efforts. And ever since I’ve started blogging, I haven’t had much extra time and energy to dream up cycling-related articles for dp.

After the Nevada City Classic criterium on Father’s Day this year, however, a dp article idea presented itself to me. In fact, this idea pressed itself upon me with some vigor and wouldn’t leave me alone until I turned it into a story. (The timing of this endeavor was poor, as the day after the race I left on a big road trip with my family.) I hadn’t gone to the Nevada City race with any idea of writing about it; after all, it’s a big race, and actual journalists would be there. Which begs the question, why should I ever submit stories cycling to dp, when there are people who do this for a living?

It was only after reading the articles by the real journalists that I decided to write my own. The race had been a blast to watch in person, and I felt there was more to the event than the online news stories were set up to convey. To mainstream cycling magazine, this was a race among dozens of others on the calendar—not so different from a swimming race, say, or a basketball game. To do the race justice, I felt, somebody needed to explore one of the most glorious aspects of bike racing: a sense of place, and how the place is the race.

I grew up as a swimmer. My whole family was into it. We had the bumper stickers on our car (“Swimming keeps kids clean,” “I’d rather be swimming”), we were on the swim team (the Red Barons and later the Poseidons), and we even subscribed to a swimming magazine. That magazine was the most boring I’ve ever seen—pages and pages of charts of the times swimmers clocked in different races around the country. My brother Max actually got into it, memorizing times and such, but I never could.
xxxxxxxxxxxxxxxxxxxxxxxxxxx
The problem was, the sport itself was as boring as the magazine: the same pool, day after day; the same workout, lap after lap; the same guys at practice, week after week. Your chances of meeting up with a stranger in the pool and duking it out, just for fun, were exactly nil. Your chances of seeing an owl swoop over the pool: nil. The chances of one workout being significantly different from another: nil. The chances of a swim meet presenting a pool that varies from the one you practiced in: nil. Sure, there was the old us-vs.-them territorial rivalries; we were swimming for Boulder, against, say, the team from Cherry Creek, but where this meet happened really didn't matter so much.

Basketball is more exciting to me (to watch, anyway), but it still presents the same problem of venue: it never fundamentally changes. In fact, the fixed, carefully delineated court is crucial to the sport. As with swimming, everything is uniform, nationwide. There’s a scene in “Hoosiers” where Gene Hackman’s character, the coach, takes a tape measure and shows his humble players that the dimensions of the court where they’ll be playing some big championship are the same as at home—that the “home court advantage” the other team may have is purely psychological. The teams are representing their hometowns, but the location of the court doesn't shape the action.

Cycling and the importance of place

Road cycling is completely different. The venue is all-important. There is no attempt to normalize the course; on the contrary, the most famous races gain their following from the difficulty and uniqueness of the terrain. Just say their names, and the cycling aficionado will get a dreamy look. Alpe d’Huez. Paris-Roubaix. Mount Ventoux. The popularity of these races, and their importance, derive from the history that builds up around each, largely owing to how it showcases the prowess of the racers it attracts, and how it challenges them based on its unique difficulties. The Amstel Gold race has the headwinds. Paris-Roubaix has the cobblestone roads. Alpe d’Huez has the steep pitches. The course defines the race, and the growing legend of the parcours eventually establishes the importance of the event.

Compare this to sporting events where the importance of a game stems mainly from the official status assigned to it. Take the Super Bowl, for instance: the venue is immaterial, as it changes from year to year. This game is the most important and most-watched event on the football calendar simply because the team that wins is declared the best American football team on Earth for that year. Sure, the big playoff and championship games deserve their importance because (in principle) the best teams have earned their right to play in them, but this doesn’t change the look or feel of what you, the fan, witness. You’re especially excited because of how the game shapes the rankings, not because it’s guaranteed to be a better game than what you’d watched all season.

Watching a great bike race, you’re especially excited because not only are the racers punishing each other, but the epic course is punishing all of them. You can see the suffering and appreciate it on its own merit, because you’ve pedaled a bike up a big hill and know how hard that can be, and maybe you’ve ridden this very road and know how especially steep or long it is. The official place of this race on the Pro Tour calendar, and the points assigned, are matters of trivia as you watch the drama unfold.

Fans have a huge role in establishing the look, feel, and excitement of a race. In most ball sports, the important games will always have a sold-out stadium. The most important games will usually turn away more fans than the less important games (I’m told the Super Bowl largely favors those with the money to travel and cover the ticket cost). But in bicycle racing, it’s much more democratic: the locals, or others willing to travel, can always get a place on the side of the road, for free, if they’re willing to get out there early (camping out there in many cases). True, these fans only get to see their heroes go by once, but on the other hand, they’re six feet away, or less. They can push a struggling rider up the hill. They can see the faces of the riders. This is what fans will always come to watch, regardless of whether or not UCI points hang in the balance.

My Nevada City story
xxxxxxxxxxxxxxxxxxxxxxxxxxxxxxxxxxxxxxxx
This is why I bothered to write my own Nevada City story, a couple of days after the mainstream online journals had already covered it. There was room, at least on the Internet, for another story: a closer, deeper look, a ramble even, about this event. The existing stories weren't inappropriate, based on the place of this race in the calendar, its lack of points, and its domestic-only field, but I feel this event warranted a bit more. I wanted to write about the difficulty of the course, and how this has helped it historically attract—and continue to attract—the very best American cyclists. Why was Lance really here, anyway? Why did he brave this dangerous criterium course, so close to the Tour de France? What makes this race special? What made this year’s edition particularly exciting? What was it like to be there?

I hope I succeeded in getting deep into the history, the charm, and the exhilaration of the Nevada City race. Here’s the link to my story:

2003 La Marmotte (an epic “cyclo-sportif” race I did in France):
http://www.dailypeloton.com/displayarticle.asp?pk=4565

Five Seconds on a Mountain Pass – a discussion of descending and speed wobble:
http://www.dailypeloton.com/displayarticle.asp?pk=8468

“If I had defended Landis”— a humor piece on the sad tale of Floyd Landis’ positive dope test:
http://www.dailypeloton.com/displayarticle.asp?pk=13040
Posted by Dana Albert at 11:00 PM