What is a Century, and why?
A “century ride” is an organized, supported bike ride that is either 100 miles or 100 kilometers long. (The 100 km version is usually called a metric century, and most century rides offer both, and sometimes a third, shorter option.) I’ve been doing them since I was twelve. At that age, the support—rest stops with food—enabled me to conquer the distance. These days, I’ll sometimes do a hundred-mile ride without support (cycling nutrition having come of age), but it’s fun occasionally to ride on unfamiliar roads and be coddled a bit with decent food along the route and a dinner waiting at the end. 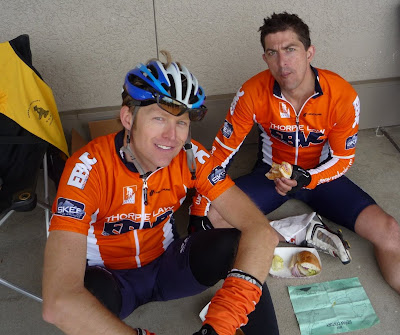 My friend and East Bay Velo Club teammate Mark and I rode the Sierra Century last week. In years past this ride has featured a brutal course with long, steep climbs. This year they had a new, tamer course. It started at a high school in a subdivision near Rocklin, CA. I’m describing it in this blog mainly to give you a flavor for what these rides are like, and also to introduce my readers (if any) to a unique literary genre: the East Bay Velo Club race report.

Bike racing seems to be a very verbose sport. I’m not sure why this is the case. Perhaps it’s because it’s a sport you can do while chatting. In fact, if you’re going to ride 100 miles, you almost have to make conversation or you’ll generally get bored. I suppose I’m one of the chattier riders out there; my teammates know that if I’m working too hard to talk, I’m pretty much redlined and they have a great opportunity to attack and drop me. (I call this the Peak Conversational Threshold, related to the Anaerobic Threshold beyond which you cannot sustain the effort.)

The East Bay cycling community is a really great batch of conversationalists. We discuss the usual topics—politics, cars, movies, music, weather—but also some wilder stuff. (For example, I once had a fascinating discussion, over a twenty-mile period, with my friend Takumi about public key data encryption and computer piracy.) We also have a fair number of dads on the club, so I can compare parenting strategies, stories, and arcane theories (such as the notion that cyclists cannot sire male offspring). But whatever else we talk about, old race stories—Big Ring Tales, they’re often called—are a staple.

Of course in the Internet age these tales aren’t only passed down orally. I’m sure we’re not the only club that has e-mail group lists send around race reports. But our reports are different, I think. I can’t remember who first reported on what he ate after a race, but I remember that he ate goat , and I was delighted to read about it. So the next time I filed a race report (which was months later—I almost never race), I made food the focus of my report, and I’ve encouraged others to do the same, and they have. So a new canon has emerged: race/food reports.

My Sierra Century report
[What follows is my report to the EBVC of the Sierra Century. It is given pretty much verbatim, other than the section headings, some elaboration of bike-geek shorthand, and the disclaimer at the end. You should treasure this as a rare glimpse into the exclusive inner sanctum of this cycling community. (Okay, it’s actually not much different than my regular bloggage, but I’m trying to drum up some enthusiasm here before you wander off to watch “reality” TV.)]
Since this wasn’t a race, you’ll have to do without paeans to the religion of suffering, or tales of tactical intrigue. Suffice to say we proved wrong the old dude at registration who insinuated to Mark that he was starting out too late to complete the full 100 miles.
Carbo Loading
Dinner the evening before, with Erin and the kids, was at an upscale Mexican place in Placerville. In general I’m opposed to upscale Mexican (it’s an ill-advised fusion, like discount sushi), and my instincts weren’t wrong. The food was fine, just fine. I had a chile relleno with the usual sides, virtually all of Lindsay’s cheese enchilada and sides (she refused to touch her food but asked me several times to take a photo of it), etc.
Breakfast the morning of the ride was two slices of Starbuck’s pound cake and a banana. Oddly, though Starbucks generously donated the breakfast, there was no coffee to be had. I suppose I could have taken the emergency No-Doz I keep in my patch kit, but I figured I’d be okay without my un-doping practice for this ride.
The Ride Itself

Of the ride itself, virtually nothing is known. The entire affair is shrouded in fog. However, I did snap some photos, which later triggered my memory enough that I was able to create some captions and additional commentary. Here is the link: Sierra Century '09.
The Dinners
Dinner #1 (eaten at about 3:30 or 4), provided by the ride organizers, was the same penne with tomato sauce and chicken that they’ve had the last couple of years, though it was especially sweaty and insipid this go-round. Even after 100 miles it didn’t taste good. I had three plates, along with some overdressed salad and a spongy, pointless roll, before an annoyed-looking volunteer came and cut off my wristband. (If anybody from the Sierra Century outfit is reading this, take heart: often, nothing tastes good right after a ride like this, when ketones from excessive fat-burning invade my mouth and make most food taste like aluminum. I really do appreciate all the support! 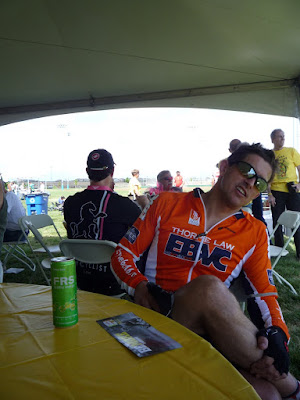 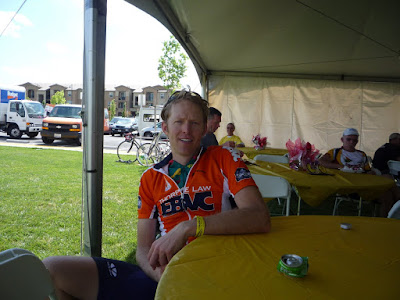 Dinner #2 (eaten at about 7:30 or 8) was at the Sequoia House in Placerville. It’s a mid-19th century mansion, beautifully restored, that had been home to the Bee family, of Sacramento Bee fame. Shortly before our arrival in the dining room a man had proposed to his girl at a nearby table. That kind of place. They had a Belgian beer I’d never heard of on draft, so I immediately ordered a pint of that (for the bone-strengthening boron, you know).
We started with sweet potato fries, served festively in a tall paper cone stuck in a sundae glass, flanked by three dipping sauces. Per spec, the fries were slightly caramelized, crispy, highly inhale-able, and the sauces tangy and inventive without being weird. I had a very good Caesar salad, with anchovies, perfectly dressed and basking in parmesan lunacy (to paraphrase Nabokov). I had some of Erin’s house salad as well. You know those horrible cafeteria-grade salads where the lettuce has somehow dried out completely without, eerily enough, actually wilting, and that taste like cardboard? This was the opposite, as you’d rightly expect from an upscale place.
My entrée was lamb prepared in some modern way that was tasty (I’m no food critic, obviously), with mashed potatoes infused with the infusion of the moment. What was it? Garlic? Rosemary? Who knows. It was good. There was asparagus, perfectly cooked, excellent. (I was disappointed, in a self-serving way, not to inherit any of my kids’ asparagus; thankfully, I did get second-hand fettuccine Alfredo from both little angels.) My dessert was several gulps of fresh air (a welcome change from the cookies and energy drink I’d been grossing myself out with during the ride). All told the check was only $10 or $20 more than the Mexican place the night before. A real find, this Sequoia House. Even the service was great; lacking a booster seat, they seated Lindsay on several fancy throw pillows so she looked like the Queen of Sheba. A Disclaimer You shouldn’t eat like this at home! For that matter, you shouldn’t eat like this at a restaurant. I had a little fun here, folks, eating two dinners and getting enough second-hand calories from my kids to comprise a whole extra meal, but I’m not advocating such gluttonous behavior, at least not for the common man. It is an established fact that cyclists need, deserve, and consume more food than any other athlete (or non-athlete, for that matter). A Tour de France rider, it is estimated, burns about 8,000 calories per day throughout the three weeks of the race.
I ride for many reasons—cycling is my spa, my shrink, my stress outlet, and my social club—but chiefly among them is simply this: cycling enables me to eat whatever I want, whenever I want, in whatever quantity I want, with extra gravy and a side of bacon if I want. Does this sound like a good lifestyle? It is, it really is. But I should caution you: bike racer types do hard rides, and we do them jolly hard.