The technology is called Adsense, and it’s what generates the Sponsored Links (i.e., advertisements) that you see alongside Google searches and Gmail. These ads never bothered me when I saw them in Google’s search engine; even when I starting using Gmail, I found the ads unobtrusive and ignored them—at first. But over time I’ve come to dislike, and fear, where Adsense is taking the advertisement industry. This post describes my misgivings, and my humble attempt to combat Google’s technology.

My problem with ads

Google aside, I dislike ads. They’re a nuisance, like telemarketers. It bothers me that ads of all kinds are becoming more and more ubiquitous. Now you get them in movie theaters, in elevators, at the gas pump, even on the back of hotel room keys. I assert that a company’s need to advertise is generally based on one (or both) of two scenarios:

Notice how best-of-breed products don’t need to advertise. Think of your favorite restaurant: does it advertise? It probably doesn’t need to: word of mouth and good food are probably all it needs to thrive. On a larger scale, when’s the last time you saw a Google billboard? (No one can deny the quality of products like Google search, Picasa, Blogger, and Google maps. Similarly, Google doesn’t need to tout them.)

The ads that create demand for unnecessary products usually do so by suggesting that we’re somehow not complete or optimized without them. Many years ago I came across a really memorable quote in a profile of George Meyer, a writer for the TV show “The Simpsons”: “I hate [advertising] because it irresponsibly induces discontent in people for one myopic goal, and then it leaves the debris of that process out there in the culture.” Think of the fictitious syndromes created by advertisers, like ring around the collar (which I’ve never seen in my life). Or, “Cute guy, but he’s scratching his head … could be dandruff!”

That said, I see many kinds of advertising as generally harmless—a necessary evil, perhaps—especially in traditional forms such as print ads. From an environmental perspective I’m against publications like fashion magazines or newspapers where the ads greatly outnumber the pages of actual content, but I can live with the ads in, say, the “New Yorker.” These ads are generally for things I would never consider buying, so I don’t really notice them, and I can prove it: from time to time the magazine sends out online surveys, and the first page will ask, “Do you recall an ad for [such-and-such] in the issue of [date]?” I (honestly) answer “no,” and then the next screen shows me the ad: “Does this look familiar?” D’oh! It does! So I have a vague awareness of these ads, but I can count on zero hands how many Rolex watches I’ve bought as a result of seeing them.

How Adsense changes the game

Adsense, however, tailors the ads to other text on the page—your text. If you search on, say, “computer printers,” above your search results will be sponsored links from, say, HP, Epson, and Geek Squad. Or if you’re a Gmail user and, in an e-mail to your brother, you describe a problem you’re having with your printer, you shouldn’t be surprised to see similar ads alongside your message and his response. The ads are tailored to you, which the Gmail folks pretend is a service. (New this year: if Adsense can’t tailor an ad to a current Gmail message, it’ll give you ads based on other messages in your Inbox. Presumably this could allow unopened quasi-spam messages, like solicitations from charities you’ve supported in the past, to spawn solicitations alongside a message you did choose to open.)

I don’t have a problem with Adsense as a part of Google’s search engine, because when I visit google.com I’m looking for something. Likewise, I have no problem with amazon.com suggesting that if I like Radiohead I might also like Coldplay, because amazon.com is a retail site—I’m there to look for things and buy them, after all. But putting ads alongside my personal e-mail is obnoxious—I’m there to enjoy correspondence, not to shop. Google isn’t the first e-mail provider to do this, of course, but Adsense greatly increases the chances that I might actually pay attention to an ad: that is, it increases the chances that the blurring of lines between personal and retail time will be successful, which I don’t want it to be.

Okay, fine—if I don’t like ads in Gmail, I just don’t use it. So what’s the problem? Well, I do use another company’s e-mail product (paying $10/month for the privilege of ad-free e-mail), but I’m still involved in the Adsense scheme every time I send an e-mail to a friend or family member’s Gmail account. My e-mail content will dish up sponsored links that my recipient might be inclined to click on. I want no part of this, but I can’t opt out. I have discouraged my brothers from using Gmail, but they can’t resist its great design. Tyranny doesn’t have to come via brute force: we’re all too susceptible to being lulled into it. As an Aesop’s fable has said, “Persuasion is better than force.”

Which brings me to another issue I have with Adsense: it’s furthering the widespread acceptance of ads in general. People used to pay extra for cable TV because it didn’t have ads; now it does. People grumbled at first when commercials started playing in movie theaters—imagine, paying good money to see ads!—but once they showed up those ads never went away. Now I see ads alongside blogs. Adsense can be invoked on any blog hosted by Blogger (aka Blogspot, aka Google). One of the main links on my Blogger dashboard is “Monetize,” and by clicking it I get breathtakingly close to changing albertnet from a place to read in peace to a vehicle for advertisers. Suddenly, your average Joe can go from ad audience to ad generator with just a few mouse clicks. Google is the kind of juggernaut that can influence society in untoward directions; that their corporate motto is “Don’t be evil” isn’t much of a comfort.

What is to be done?

It’s probably too late to recommend that people not use Gmail for their primary personal e-mail (by one count it currently has 146 million subscribers). Moreover, anybody who uses Blogger or Picasa (myself included) is required to maintain a Gmail account. Some anti-Gmail websites advise people not to send e-mail to Gmail addresses, but this is similarly impractical.

I’m not expecting happy Gmail users to abandon their e-mail provider; I would just like them to think about what Google is doing with Adsense. I would like people to recognize that by using Gmail, they’re giving up something: not privacy, per se, but another little corner of their world not infected by marketing. I would like people to take a moment pondering exactly what brave new world they’re being lulled into. And I think Gmail users ought to accept responsibility for helping to inch society ever closer to an advertising climate like what we saw in “Minority Report,” where a person’s every waking moment is spent being bombarded with targeted solicitations. 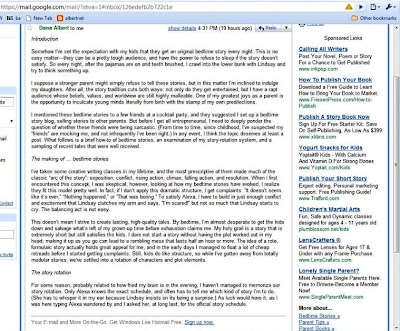 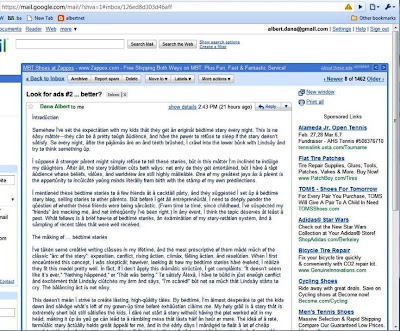 The macro-revised text is a bit annoying to read, of course, but that’s half the point: when your Gmail recipient asks about the funny marks above the vowels in your e-mail, you can send him or her a link to this blog post, and ask (rhetorically) what’s worse: stray marks around the vowels, or customized ads turning personal correspondence into a retail opportunity?

I doubt anybody would actually bother to use my macro, but I’d be happy to send it to whoever wants it (e-mail me at feedback@albertnet.us). I’m sure there are much cleverer ways to foil Adsense than I’ve come up with; I’m just a recovering English major, after all. I’m sure a good programmer could quickly code something that would hook right into the browser and twėåk thė vøwėls, or perahps mkae smoe ohter chaneg ni teh tetx thta aslo fiol Adsesne. I’ve pondered an e-mail footer in a tiny white font containing just the right text to elicit a bunch of inline ads for innocuous products like Carmex or Rolex, ignoring the real e-mail text. If you have any ideas, please feel free to post them below, or e-mail them to me.

Ad-haters of the world, unite!