An otherwise perfect ride with my bike club on Sunday was marred by a crash toward the end. No, it wasn’t a fiery wreck as promised in the title, but it was pretty spectacular. The guy who crashed, Sean, wasn’t seriously hurt, or I wouldn’t be so cavalier about treating his crash like fodder for cheap blog entertainment. I e-mailed the club with a photo I’d snapped with my smartphone (below), and naturally those who weren’t there wanted to know what happened. As Sean’s e-mailed rendering of the tale ran barely over fifty words, I decided to flesh it out a bit. So here’s my version of what happened, as seen from about fifty meters behind. 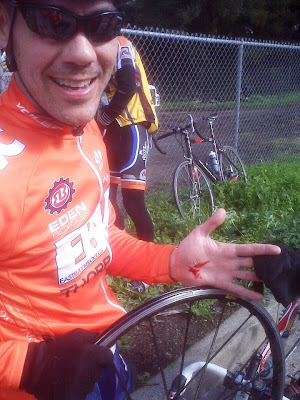 Well, there’s not much to tell about Sean’s crash that he didn’t already mention, but upon reflection I realize the crash was all but prefigured at several points in our ride. Consider: at Royal, EZ commented on my Road ID bracelet (I said I wore it to appease the wife; he thought that might backfire by merely reminding her of the danger). This isn’t remarkable in itself, except that we seldom talk about crashing; it’s almost a taboo topic for some of us. Then, at the top of Tunnel, several guys chided me for continuing to ride a cracked bike frame; several theories were put forth on how catastrophic a seat tube failure could be. Then, as we prepared to descend Skyline, Campbell (noting the wet roads) facetiously advised the guys up front to take the curves as fast as possible, perhaps locking up the rear wheel to slide it around. “That works in mountain biking,” I pointed out, sparking a discussion of the physics of high-siding and a tale of my ill-fated attempt, while drunk, to do a 180 in snow without planting my foot. Later in the ride, not ten minutes before the actual crash, a few of us discussed Sean’s odd sartorial technique of removing the chamois from an old pair of shorts so he can layer two pairs of shorts on cold days. Muzzy asked, “How much insulation do you get from 1/8” of Lycra?” I pointed out (or did I only think it?), “Probably good for limiting crash damage, anyway.” All this crash talk … could we sense fate lurking in the background? It wasn’t a day for the Grim Reaper to come looking for a soul, but perhaps we had a collective hunch that the Grim Weed-Whacker might be seeking a flesh offering…

So: the crash itself. We were coming down Nine Mile … okay, I’ll confess, I have no idea what the road was called, and if I’d gotten dropped on the ride I’d still be out there trying to find my way home. We were … somewhere. We’d just finished sprinting for some city limit sign … okay, I didn’t sprint. I was in the middle of a fascinating conversation with Muzzy about the fallacy of treating economics as a hard science (when no two economists can agree on a past observed phenomenon, much less the current state of affairs and what we can expect in the future), and it would have been very rude to suddenly abandon the discussion to sprint, especially when I would’ve gotten my ass kicked anyway. So we were still chatting away on this downhill, our group spread out pretty well after the sprint, when suddenly—BLAM!

The loud noise was all it took: my mental reins were passed over to the brain stem, which is so good at rapid, instinctive computation that time seemed to slow waaaaaay down such that the next five or ten seconds felt like minutes. (On a pre-dawn ride recently, my field of vision limited to the sweep of my headlight, my conscious mind thought, “Hey, why the hell am I stopping?” only after I’d slammed on the brakes. The lizard brain replied, “Because there’s some big object in your way.” The frontal cortex said, “My god, you’re right! It’s a fricking deer! Good eye, Albert!”) This is where split-second reaction time seems like child’s play. I had all the time in the world to wonder if perhaps somebody had been shot. (The brain stem, though quick, isn’t very bright.) Am I hit? Am I bleeding? Eventually I realized, okay, that was not a gunshot, somebody blew a tire. It wasn’t immediately obvious who, though, or how. (Evidently there was a pothole; I never saw it.)

Up ahead, Sean went into a gnarly fishtail. If he’d been on a snowmobile, deliberately oversteering and goosing the throttle, he’d have thrown up a glorious roostertail of snow. A nonverbal snippet of my earlier high-siding conversation with Campbell flitted by. But Sean didn’t flip; instead his rear tire reversed its course and fished across to the left. For a millisecond a memory flashed in my mind like distant lightning: I was racing a criterium in Colorado Springs, and a guy who’d just taken a flyer lost control in a chicane and fishtailed, and I knew—complete conviction—that he was doomed, and he was. Now, however, with a connoisseur’s appreciation of bike handling, I marveled at the certainty that Sean would save this one. Even when he fishtailed again, back to the right, I just knew he’d ultimately pull it out. Except he didn’t.

As he crashed, I continued to occupy that roomy brain space where everything seemed to happen in slo-mo. Have you ever seen the Star Trek episode where Kirk enters some special physical realm and is sped up so everybody on the Enterprise (except a beautiful babe from the planet) seems to be moving so slowly as to almost be stationary? It was kind of like that, only without the babe. Now I was watching Sean fall, assessing his falling skill like a sommelier sampling a fine wine. His hand slapped the ground, but he didn’t stupidly plant it, as though he could keep his body off the ground, like so many hapless newbies would do, breaking a shoulder in the process. Nor did he tense up, nor did he sprawl like a sack of potatoes. Kind of a nice springy landing, and it wouldn’t have surprised me to see him end up on his feet like Pee Wee Herman. But it was a pretty bad crash. By the time we got there he was just sitting there, trying to scream with his face ripped off.

Whoah! That totally wasn’t the case. I thought I might have lost your interest there and figured I better snap you back to attention. (That was, of course, a line from “Mad Max.”) As you know from the photo, Sean’s face was never in danger—he didn’t so much as scuff his helmet. I knew he’d be okay because he jumped right up and got himself and his bike out of the road. When a guy really slaps down hard, and lies there dazed for a few seconds, then it’s time to worry. You could probably develop a model for predicting the severity of injuries based solely on how many seconds elapse before a crashed cyclist takes care of himself. (When I got hit by a car two summers ago, it was at least five seconds before I even started cussing.) Somehow, Sean had managed to shed a lot of speed before finally hitting the asphalt. We must have been going fast—my bike was still in the highest gear when I stopped—and if he hadn’t managed to slow down a lot, he’d have cartwheeled like Jan did on Highway 24 last summer.

Sean’s hand was ripped up, right through his glove. No road rash was visible, but he knew he was bleeding underneath his layers of shorts. The bike looked to be unrideable: both tires had peeled off their rims, and holes had been ripped in their sidewalls; his rear rim was badly dented. These were spanking new Ksyriums, too … both totaled, what a shame. Campbell, closest to home, pedaled off to get his car. After gawking at the bike damage for awhile, we did some Flat Repair by Committee. No longer was my brain stretching out seconds for better reaction time; rather, our actual progress was truly happening in slow motion. Let’s face it, crashes are exciting, and so long as nobody’s seriously hurt, it’s hard not to chatter away about everything, much as I’m doing now, at the expense of efficiency. We booted both tires, pumped the rear up to about forty pounds (anything more and the tire could blow off the damaged rim), called Campbell to cancel the car-lift, and escorted our fallen hero on home.