From the Archives – A Study on Rinsing

I use a lot of energy drink when cycling. By “use” I generally mean “drink,” but I’m also a true believer in the cutting-edge practice of “rinsing.” I learned about rinsing in February of 2008 from a knowledgeable EBVC teammate of mine who sent around an e-mail describing a study that concludes, “Carbohydrate mouth rinse has a positive effect on 1-hour time trial performance.” 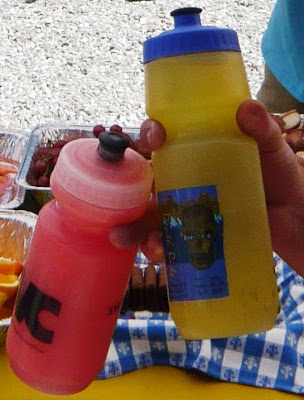 This study was an attempt to understand why, as multiple other studies had shown, sports drinks seem to provide a performance benefit even for short (e.g., one-hour) workouts. You wouldn’t expect the drinks to help for so short an effort, since existing glycogen stores ought to last that long, and turning new carbs into glycogen isn’t an instant process anyway. The results of this study suggest that the benefit derives from something other than the carbs in the energy drink, which is why swishing energy drink around in your mouth and then spitting it out is as good as swallowing it: “The mechanism responsible for the improvement in high-intensity exercise performance with exogenous carbohydrate appears to involve an increase in central drive or motivation rather than having any metabolic cause.”

This report brought about a long and lively discussion among the guys on the bike club, and while I found at all very compelling, I wasn’t inclined to take the scientists’ word for it. Why should I, when I have all the opportunity in the world to test this phenomenon myself? Thus, I ran my own experiment and reported back to my bike club. This post documents those results for my information-hungry albertnet audience. Following the report is a further exploration of this strange topic.

Test Objective: To determine if rinsing the mouth with a sweet beverage increases an athlete’s short-term performance.

Test Procedure: There was unfortunately only one test subject available for the study. Thus, he represented both the rinsing group and the ingestion group.

On Wednesday, March 5, subject rode a specific test course, the Hill Climb Extravagaanza, and consumed one gel approximately thirty-five minutes into exercise. His power output, heart rate, and rate of vertical gain were recorded on the three climbs ( , , and Lomas Cantadas) and uploaded to a PC. (Click image to enlarge.) 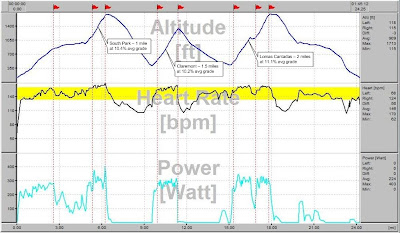 On Friday, March 7, subject rode the same course, this time rinsing his mouth with energy drink every few minutes beginning ten minutes after completing his warm-up, and drinking without spitting after approximately thirty-five minutes of exercise. Again, his wattage, heart rate, and rate of vertical gain were recorded on the three climbs. The performance data were then compared using a special software application called the Bragulator.

Measures were taken to make sure subject was not influenced unevenly by music. Not only was he not wired with an MP3 player, but was instructed to ride with similar tunes in his head on both days. It is acknowledged that driving rhythms or the repetition of an inspirational phrase like “Blood of a slave ... heart of a king” on one day, but not another, could skew results.

Test Result: The Bragulator tabulated the following statistics for the two rides: 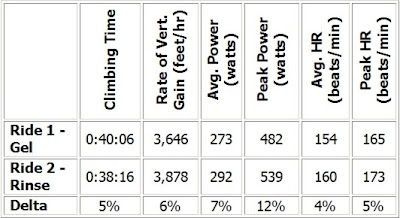 Across the board, performance was better when rinsing with energy drink early in the ride.

In addition to the stats shown above, subject was almost a minute faster on the first climb, , on Ride 2. This further supports the validity of rinsing, as this was the climb during which subject had no sweetness on Ride 1, but did have sweetness—without calories!—during Ride 2.

Naturally, a larger set of subjects would increase the validity of the study, especially since the one test subject is known for either slacking off or getting medieval on his own heinie according to his whim.

It should also be pointed out that the power meter used in this study makes its calculations using barometric pressure, velocity, and the constant of the subject’s weight, and thus has an inferiority complex about the fancier strain-gauge-based power meters. (Meanwhile, the subject’s weight isn’t really a constant.)

Ride 2 took place on a sunnier day, though it is believed there was not enough sunshine on subject’s shoulders to make him high.

Most importantly, the open road cannot be locked down like a true laboratory environment, and the subject’s training diary includes information that may cast some doubt on the validity of the results:

“At the bottom of , just past the gate, I saw that mountain bike dude again. I felt like the guy in ‘Better Off Dead’ when he sees his old nemesis, the paperboy, coming after him for the two dollars.

This was the same mountain bike dude who was responsible for me getting my fastest time on for all of 2007. He looks like a thirty-something Nick Nolte, with a Steven-Seagal ponytail. Running shorts, t-shirt, and worst of all, a total piece of crap bike, I think one of those heinous Techniums from the late eighties, the last mass-market bikes ever made in and a good reason not to feel patriotic. I remember that ride well: it was on 9/11, and the guy hung on for several minutes while I went à bloc to drop him. He did finally blow, but it took all I had, and at the end of that ride my fricking frame broke!

So here he was again, and though I had him in my sights I was barely even gaining on him. How could this be? I have over a decade of racing experience, he has ... talent, I guess. I have an 18-pound bike, he has ... a 30-plus-pound mountain bike, and, I guess, talent. I have all these sophisticated training and nutrition methodologies and he has ... talent. What could I do? I took a big drink of Cytoplasm [Cytomax – Ed.], spat it derisively at the ground like a smoker flicking away a cigarette butt, and dug in. By the time I got to the base of the main climb I’d just barely made contact.

I greeted him and he replied in this big deep manly voice. That’s what he is, just a big strong manly man, a man’s man, and what am I? Lycra, cawbun fibuh [carbon fiber – Ed.], dogged determination, fancy-pants bike computer with heart rate monitor and PC upload, the physique of an Aborigine, and I was still barely able to drop him. At least he helped me find some motivation....”

Conclusion: Further study is needed. Anybody willing to serve as a subject in this study is encouraged to apply to feedback@albertnet.us. Subjects must be in good health, have fancy-pants bike computers, be willing to complete the Hill Climb Extravagaanza at dawn on a regular basis, and must bring their own gel and energy drink.

Once I decided rinsing was legit, I adopted it as standard practice for the first half hour of each ride. Why not just drink, you ask, even if it’s not the calories that are helping? Well, spitting out energy drink saves weight, of course! Why take that heavy beverage into my body, if it’s only the flavor that enhances my performance?

Besides, I am very careful about not fouling up my blood sugar level. It’s well established that during intense exercise you can have all the sugar you want without affecting your insulin and such—the sugar gets used right away. (This phenomenon continues for half an hour or so after the workout ends.) But if you have a bunch of sugar before the workout, you’ll have a nice sugar high followed by a serious slump. Not knowing how long I have to exercise before my body can use sugar easily, I’ve long been wary—even superstitious—about it, and avoid drinks and gels until about half an hour in. But I’ll start rinsing after just ten minutes. And so far, so good!

More than a year after my small study, another EBVC teammate sent around a more recent report further documenting the benefit of rinsing. This study finds that “the cyclists who had rinsed with the carbohydrate drinks — and spit them out — finished significantly faster than the water group,” and that the rinsers’ “heart rates and power output were also higher.” Again, it is postulated that the phenomenon is a brain thing: “It seems that the brains of the riders getting the carbohydrate-containing drinks sensed that the riders were about to get more fuel (in the form of calories), which appears to have allowed their muscles to work harder even though they never swallowed the liquid.”

This brings the total athletes studied up to eighteen, including me. That’s still not a very large sample, but perhaps this is for the best. If everybody know about rinsing, imagine the number of energy-drink puddles you’d encounter all over the road, especially at a big race! dana albert blog