I’ve done dozens of organized, supported rides over the years, starting with my first century ride when I was twelve. Each ride tends to have its own character, but I did one recently that was completely unlike any other. I shall describe it to you in this post, while withholding various information like who, what, where, and when (though I’ll explain why). I have substituted an X for the final word in the ride’s name to keep that a secret, but at the end I will provide you with a way to learn more.

Why the shroud of secrecy?

The best thing about De Ronde van X is that it’s free. The cost of organized rides has steadily climbed over the years, mainly due to the cost of providing police and road closures. The STP double-century is $95, the Death Ride is $105, and Levi’s Granfondo is now $130. There’s often a usurious transaction fee on top of that.

De Ronde van X is free because there is no police support, no medical support, and no road closures. In fact, you don’t get official support of any kind—just the camaraderie of other riders, a really cool route, and signs painted on the road showing you where to go. It’s a nice stripped-down, minimalist format.

Of course, without permits and road closures and cops, a ride better not get too big, and this year there was a serious threat of that happening. The ride started in 2007 with about a hundred riders; the next year it attracted close to four hundred; then, last year it drew between 600 and 700 riders and got some media exposure. This year it was quasi-canceled: virtually no information was available on the web in the weeks before (I couldn’t find it even by searching on its name). The 2010 edition was finally announced on an obscure (.org) website five days in advance. I’d never have known about De Ronde van X except through word-of-mouth, which is what its organizers actually wanted.

I’m no fan of “Critical Mass,” a monthly ride that takes place in San Francisco (and lots of other cities), which seeks to get the hugest number of bikes possible on the road at once, to raise awareness of bicyclists among motorists. (I think Critical Mass frightens and annoys motorists.) In general, I dislike crowds, and in a society where the growth imperative rarely goes unquestioned (in fact, where companies must either continuously grow or die), I admire a ride like De Ronde that tries to limit its own growth. Frankly, I enjoyed the elite aura of it; think of a speakeasy, or the scene in the movie “Swingers” where the characters navigate a labyrinth of hallways and such en route to a nameless secret nightclub. To keep the low-growth spirit alive, and keep the Ronde promoters out of trouble, I won’t say when or where the ride took place. Suffice to say it was in the year 2010 in a western state.

My friend Peter lives in X, and before heading to the ride's start, I did about forty miles in the hills nearby. De Ronde isn’t a century ride—what it lacks in mileage it achieves with climbing—and we wanted at least 100 for the day for tradition’s sake. After this pre-ride Peter and I met up with Dan and his pal Brian at De Ronde’s official starting place. There was no announcer, no start line, no pandemonium, just a whole bunch of cyclists. (There’s a quasi-offical start time but we’d seen a few dozen earlier starters already.) I’m no good at estimating numbers; see for yourself: 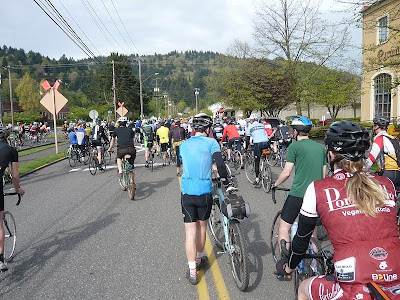 One great thing about a non-supported underground ride is that you can take little dirt paths without worrying about how emergency vehicles might get to you. The route took us into the dirt right away. It was no problem, of course, but with cloudy skies I wondered how muddy things might get later. 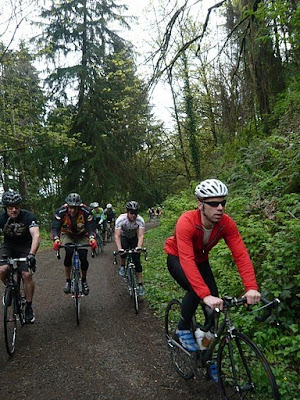 The truly rigorous thing about this ride is the climbing. Before my bike computer died (more on this later), I was able to see a total of 10,300 feet of climbing, more than 7,000 of which was along the Ronde route itself. And yet, no single climb was longer than maybe a mile, tops. It was just a saw-blade kind of topography where you could never really settle into a rhythm, and there was no way to gauge your progress … no peak to keep your eye on, just a seemingly random distribution of gravity-induced suffering. I’m tempted to describe it as the cycling equivalent of being waterboarded, but of course we were always free to stop pedaling and take a rest (which we actually, did, once). My friends and I all love climbing, so we were in good spirits throughout. 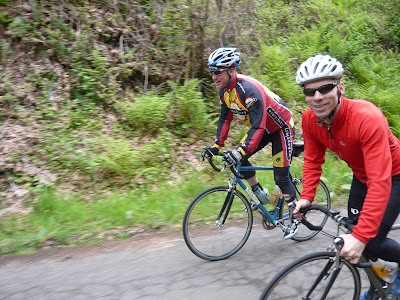 The steepest climb, I’m told, was 23 or 24%. Whether or not this number is accurate, that climb was certainly the steepest grade I’ve ever ridden up. It was actually scary—I worried that if my gears skipped, or one of my (utterly worn-out) cleats popped out of the pedal, I’d tumble down the hill backward, mowing down other riders like a bowling ball, until I reached the bottom. Here’s a video of the climb, in which I attempted to show how high my heart rate got from the climb. (The effect was underwhelming, as my heart rate plummeted once I stopped pedaling. It’s also the case that steep climbs never look steep in photos or movies.)

I’ve never seen so many riders walking their bikes, even in our modern age of triple cranksets and compact chainrings. At each driveway along the road, numerous riders would make a quick loop to rest his or her legs for just a few seconds; at one such driveway I stopped to take pictures. As a hedge against my video not working right on this website (as has happened before), here’s a still shot. 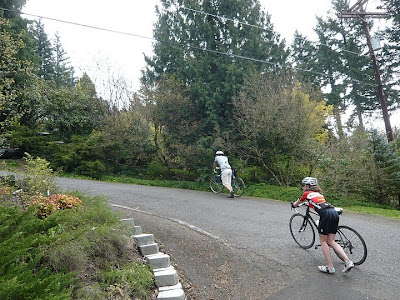 One great thing about the ride was how little traffic we faced. (This isn’t always the case, with organized rides; I did a charity ride in Napa Valley a couple years ago that was downright scary, with a constant stream of alcohol-impaired wine-tasters driving by us on a narrow highway.) De Ronde put us mostly on residential streets winding around the hills of X—not on any useful corridors for cars. Look how relaxed Peter looks here (notwithstanding the hill he’s pedaling up): 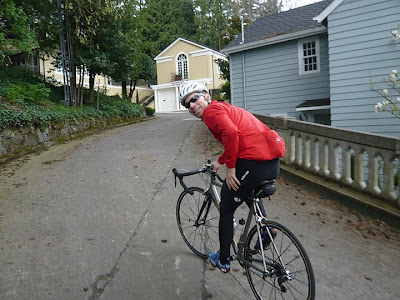 Another thing I loved about this ride was unexpected support from residents along the way. About five hours into the ride (two hours into the Ronde proper) we came upon what looked like a kids’ lemonade stand. We almost blew right by it, but the kids were all yelling, “It’s free! It’s free!” Suddenly everybody was stopping. (Lesser riders might have caused a massive pile-up.) Three little kids and their mom worked double-time to give out cookies, fruit, and energy drink. 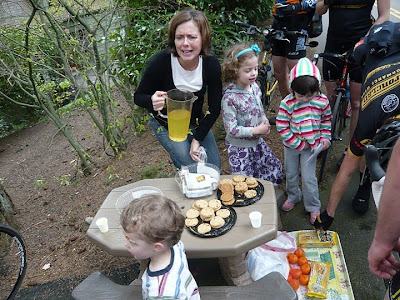 The next rest stop offered a place to go to the bathroom. I don’t mean a stinky San-O-Let, either: the resident was letting riders go into her home and use the bathroom! (Another benefit of keeping a ride small.) This rest stop was accepting donations for a nonprofit animal rescue organization. (I will provide all kinds of information about De Ronde van X to anybody who promises to donate to this outfit; just e-mail me at feedback@albertnet.us.) Looking at the photo now, I realize I didn’t see the brownies when I was there. Dang it! 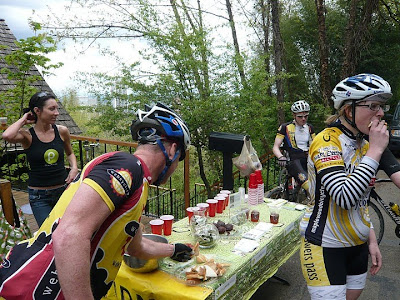 This stop was, by our imprecise calculations, “only” like ten or fifteen miles from the finish, though we overestimated how arduous those miles would be. On this basis, and on the recommendation of my doctor, I took advantage of an amenity I’ve never before seen at a bike ride rest stop: ale. Here is my doctor himself partaking of the miracle elixir: 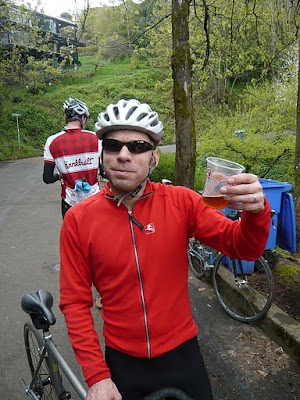 I cannot express how joyful it is to get unexpected, free support during a ride like this, simply from the goodness of people’s hearts. (This was the polar opposite of the STP ride, where there were—surprise!—paid rest stops, meaning they had led us out to starve in the wilderness unless we thought to bring cash.)

Naturally, along the Ronde route there were plenty of other riders to chat with. One guy gave me a pretty good history of the ride. He also told a chilling tale of his buddy coming unclipped from his pedal, going down, and breaking his shoulder and his hip. (Especially unpleasant for me because of my worn-out cleat.) “Did you see the kid on the fixie?” he asked me. (I had, but am not used to people my age describing twenty-somethings as “kids,” so this made me feel really old.) The guy went on, “His bike club is sponsored by a body waxing outfit, and he just took second place in their annual hair removal contest. The goal was to remove every bit of hair below the neck and I guess he somehow came up short.” I can’t think of a bigger disappointment than second in such a contest. But then, doing this ride on a fixie means the “kid” was clearly a nutjob (in the best possible sense).

There were no maps given out for De Ronde, but it was (and is still) posted online. The route shown looked like a long measure of yarn dropped from six feet onto a map; we didn’t bother to print it out. We did take a couple of seriously wrong turns during the ride, causing us to have to do two more tough climbs, which only made the ride harder and thus more glorious. The route markers on the road were pictures of the Lion of Flanders painted on the road (this ride fancies itself a U.S. tribute to the Tour of Flanders). I’m pretty sure the painted markers were left over from last year. There were a few flags as well. The important thing was that we didn’t miss the really cool bits of the route, like this trail toward the end: 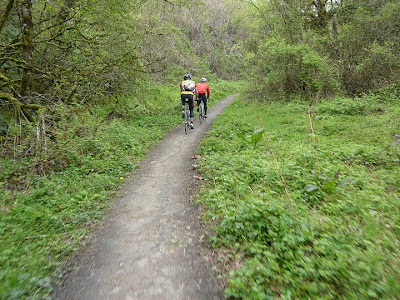 Our ride had two finishes: the official Ronde finish atop some big hill, where the skies opened up and dumped rain on us, and the second finish ten wet miles later at my friend’s house. My last photo is from the Ronde finish, after which I put away my camera in a Ziploc bag to keep it dry. Alas, I didn’t think to protect my bike computer, which leaked so badly the screen went completely blank. I lost all the stored ride data, so I can’t provide you with a course elevation profile. Maybe next year…. 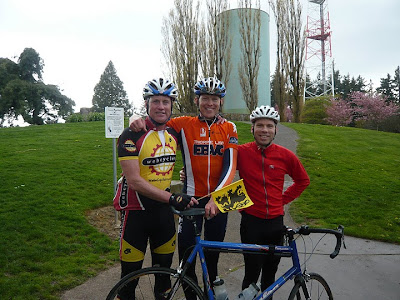 I have plenty of information about this ride: links to the interactive map, the official website, a news site describing it, and so forth. I could probably provide all that info on this blog and not substantially affect the number of riders showing up next year, but I’m curious about how many cyclists, if any, read my blog. Thus, I will provide you this info only if you either a) promise to donate money to the nonprofit animal rescue organization mentioned above, or b) write a 50- to 5,000-word essay about why you would like the ride information. (You don’t have to worry about making your essay any good. I would accept, for example, “eatmebailey” fifty times over since that would be a literary allusion to a fine work. Actually, now that I’ve used that idea, you’ll have to think up something else.) If I get any good essays I’ll post them here, with the author’s permission of course. E-mail me at feedback@albertnet.us. dana albert blog