Every year I write a Holiday Newsletter and send it with my holiday cards. As newsletters go, mine isn’t very useful; it doesn’t, for example, describe the highlights of the year. It’s actually more likely to focus on a single low point of my year, just to counter-balance all the highlights you’ll read about in other people’s newsletters. Or it’s simply random—the “secret Santa” of holiday newsletters, you might say.

In keeping with the tradition I started last year, I’ve decided to extend my Holiday Newsletter to my extended blog “family.” Enjoy.

Note: please do NOT read this newsletter aloud to your kids!

Before I get to the standard good tidings, I’d like to make a humble request of all my friends and family: please don’t tell your kids that Santa doesn’t exist! This is the time of year when I get really nervous that somebody’s going to spill the beans. I was at the library with my kids recently and saw a book was on display titled The Truth About Santa Claus. Seeing this, I felt the same kind of panic as a teenager whose mom has walked into his room before he can hide his “Playboy” magazines. What if my kid saw that book? The title alone suggests treachery.

Why, you might ask, should we perpetuate this Santa myth? Well, for one thing, it is charming to watch our benighted children participate in it. I’ve loved reading Alexa’s letters to Santa over the years, asking for mundane or impossible things (a “new live rabbit” and “more aquafresh” one year; aquafresh and “miny piano” the next). 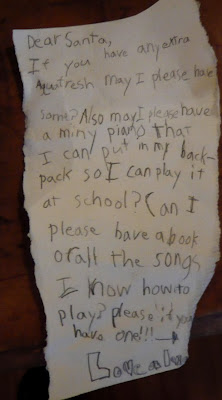 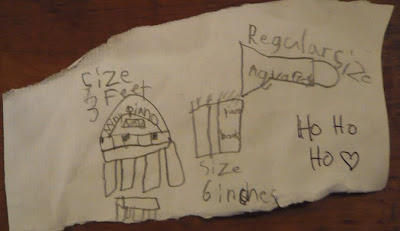 A couple of years ago on Christmas eve, right after her goodnight hug, Alexa suddenly assumed a panicked expression, like someone who just realized she left her purse in the train station, and said, “Wait! We have to put out some cookies for Santa!” Last year she left him meticulous instructions: “To tell the stockings apart, look at the license plates with our names on them in the loop on the top of our stocking.” 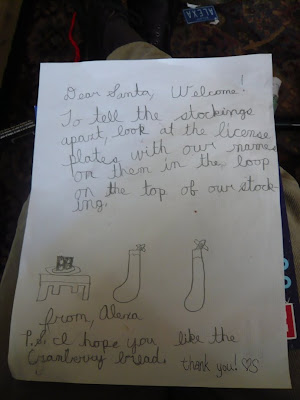 The myth is good for adults, too. It keeps us on our toes. For example, Alexa and Lindsay have somehow arranged with Erin and me that every year they get to sleep under the Christmas tree for the last three nights before Christmas. This makes it a bit tricky when it’s time to fill the stockings and deposit the presents. It’s fun going around like a cat burglar, stuffing a stocking right above their sleeping heads.

The whole Santa mythology also opens the door for useful discussions with our kids. I appreciate the chance to dispel my daughters’ natural skepticism even while encourage critical thinking. For example, they asked how a bunch of little elves could make enough toys for all the children in the world. “Oh, believe me, they don’t,” I replied. “How could they? Santa outsources most of his production, just like most corporations. I mean, think about it—would elves really make Aquafresh?”

When the kids asked about the whole “he knows when you’ve been bad or good” bit, I became indignant. “That’s just a myth that parents came up with to try to trick their kids into behaving. I won’t lie to you: Santa doesn’t know what you do and he doesn’t care. Every kid gets presents, even the ones who are little monsters all year. But you should be good for its own sake.” With this lecture I hoped to instill the impulse to question authority—but within bounds.

Another reason I’m opposed to exposing the Santa myth is that, even if your kid is ready for the truth, his younger sibling probably isn’t, and there’s no chance of the older one keeping a secret. Decades ago when my older brothers learned the truth, they wasted no time in breaking the news to me. They couldn’t wait to watch me cry, and they weren’t disappointed. Meanwhile, once a younger sibling learns the awful truth, he tells everyone in his class. Some of those kids will tell their even younger siblings, and now you’ve just trashed the whole holiday. Meanwhile, we can’t really expose the Santa myth without giving up the Tooth Fairy too. After all, once our kids realize we’re capable of lying to them consistently and repeatedly, their skepticism will naturally increase.

Ah, now you want me to defend the Tooth Fairy myth! Fair enough. Frankly, the Santa legend is fun and all, but the Tooth Fairy is something we need. Why? Imagine the alternative, which is presenting the losing-teeth business straight: “Here’s the deal, kid. One by one your teeth will get loose. Your tongue will get tired as it pushes that tooth around, until the tooth is hanging on by one little strand, at which point you’ll taste blood. Eventually you’ll yank the tooth out, which will hurt, and then you’ll have this funny-looking gap in your mouth. The next tooth that comes in will be oversized and as this process repeats you’ll get uglier and uglier until you get braces, which are truly hideous, and which will hurt all the time. Sorry, but that’s just the way it goes. Life’s a bitch.”

Compared to that, giving up a few coins or bills each time to create goodwill is a great bargain. For trivial amounts of money these kids will actually look forward to all this unpleasantness. Almost four months before she lost her first tooth, Alexa said something so interesting I wrote it down: “I wish my teeth would fall out so I would get money from the tooth fairy and I wouldn’t have to earn it.” I asked her what she would buy with the money. She replied, “A gallon of milk for Lindsay.” That’s not even a real expenditure, since we’d buy milk anyway. It’s a zero-sum game that makes it fun to lose teeth!

Here is Alexa with her first lost tooth (July ’07): 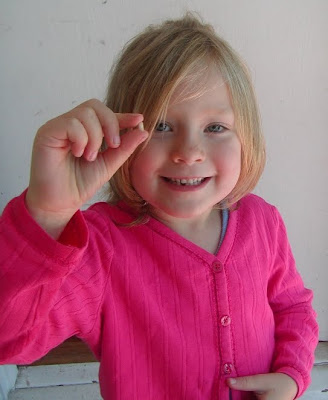 Here is Lindsay with her first lost tooth (November ’09): 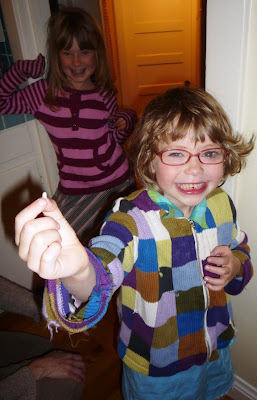 Awhile back we had a close call with the Tooth Fairy myth. I was loading groceries into the back of the car when Alexa suddenly asked me straight out if the Tooth Fairy really exists. It seems one of Alexa’s classmates was spreading the evil truth about this myth. “Don’t listen to kids, they make stuff up,” I told her. She said the kid’s mother had told it to him. Man. I’d love to get an audience with that mother and excoriate her for turning her kid into a merciless little killjoy, running around the playground sharing the bad news. I’d give that woman a taste of her own medicine: “Ah, so Truth is that important to you, eh? Well then you’ll be happy to know I just told the whole PTA how you paid for your Prius—that is, with a stock portfolio comprising equal parts Monsanto, Phillip-Morris, Halliburton, and bundled credit default swap instruments!”

We had another close call with Lindsay’s last lost tooth: I simply forgot to swap the tooth for the money during the night. I sneaked into the kids’ bedroom in the morning with a $5 bill (the smallest thing I could find), and climbed into Lindsay’s bed as if to snuggle. I reached under pillow, extracted the tooth from the special Tooth Fairy purse she’d put it in, palmed the tooth with two fingers while using other two to insert the bill in the purse, and pulled my arm out just as she woke up. She immediately checked the purse and found the money. It was unbelievably close, like the action movie cliché of people running and diving for cover mere seconds before something explodes. Which, in fact, Alexa did when she saw the five-spot. She found it totally unfair that she had never gotten that much. She was in tears. I had to scramble and explain that the Tooth Fairy pays a flat rate, based on the prime lending rate set by the government. I acknowledged that there are regional variances, of course; that in the Bay Area the tooth rate would be a bit higher than, say, a third world country. During the ensuing discussion Alexa seemed to forget all about the $5. These kinds of trial-under-fire give me some of my finest parenting moments.

So you may be wondering, when is it time to reveal the truth about Santa and the Tooth Fairy? The answer is: never. Let the kids find out on their own, or—and this is the best case scenario—let the truth dawn on them so gradually that they go from believing the myth to helping to perpetuate it without even realizing it. This will prepare them for adulthood, when they go along with the greatest mass-delusion of all: money.

Well, I was hoping to give you all kinds of updates about the Albert family, but I see I’m out of room. Have a great holiday!