NOTE: This post is rated PG-13 for descriptions of violence, mature themes, and mild strong language.

I had a dream the other night that I was James Bond. When I told the dream at the breakfast table, my daughter Lindsay said it sounded like a nightmare. I did find it disturbing, but not really a nightmare—not like the three nightmares I had the night I watched “Let the Right One In,” an incredibly, brilliantly creepy Swedish vampire movie. (I don’t remember those nightmares; only that I woke up screaming from each one, and that the bleak flavor of the movie was with me each time.)

In this post I examine the James Bond character: specifically, why all men want to be him, and what his greatest vulnerability is. I also describe my dream and how it gave me a whole new angle from which to look at … things.

In describing my dream, I said, “It started out really well. I was the Daniel Craig Bond—” and here my wife interrupted to ask why I’d dream of being that Bond. It’s a fair question—everybody seems to have a strong opinion of which actor was (or is) the best Bond. (When Siskel and Ebert did a special on Bond movies, one of them said he thought Connery was the best, and threatened to throw the other one over the edge of the balcony if he didn’t agree.) I asked , “Why wouldn’t I want to be the Daniel Craig James Bond?” She replied, “He’s not even good looking!”

Of course that’s a matter of taste; obviously Craig wouldn’t have been selected for the role had MGM not felt he would help draw women to the theaters. But he’s not for every taste. (As Erin’s mom famously said during a conversation with her daughter and me, “ never went in for hunks.” I replied, “Well that’s for sure,” and the exchange instantly became family lore.) I’m sure my wife isn’t alone in finding Sean Connery the most attractive of the Bonds. But all this is beside the point. Bond’s looks don’t matter whatsoever to men.

I’ll go out on a limb and speak for all men here: we don’t want to look like Bond; want to be Bond, because he’s so capable, decisive, and unflappable. There’s nothing he can’t fly, drive, ride, shoot, or otherwise instantly achieve complete mastery of. He never gets lost; far from it, in a chase situation he always knows the side roads and ad hoc escape routes. He doesn’t forget things. He doesn’t futz with the seat adjustment in a rental car. He doesn’t get routed all over the place by Customer Service. He doesn’t fight with the ice cube tray. He never whines or complains. And not only does he always get the girl, but you’ll never find him embroiled in some deep discussion about a relationship. He may brood, but usually only after somebody has been killed. (And hey, brooding is kind of cool.)

It would be absurd to think that Bond has a vulnerable side, that he ever needs a shoulder to cry on or admits (least of all to a woman) that he’s scared of something, or is uncomfortable, or anything like that. His character puts me in mind of a quote from Shakespeare: “O lady, weep no more, lest I give cause/ To be suspected of more tenderness/ Than doth become a man.” Bond has the traits men admire in one another, which are often different than the traits a woman might admire in a man. Women might like a man who is sensitive, vulnerable, and helpful around the house. Bond is none of these things, but gets the girl anyway. That’s what we men wish we could have.

And yet, Bond does have an Achilles’ heel: bad scripts. Let’s face it, no matter how suave and capable this character is, he’s powerless to prevent himself being stuck in a bad movie, and there have been a lot of them. It’s tempting to blame the actor playing him; I tend to hold Roger Moore accountable for the wisecracking, dippy, often constipated-looking Bond of the ‘70s and early-to-mid ‘80s. (Of his performance in the awful “Moonraker,” Pauline Kael wrote, “Roger Moore is dutiful and passive as Bond … like an office manager who is turning into dead wood but hanging on to collect his pension.”) But if I remember right, started out okay in “Live and Let Die” before the movies got progressively stupider. Was he ruining the character with his own spin, or just following the script and taking direction?

The movie creators surely deserve most of the blame; consider that Pierce Brosnan was a fine Bond, but after his first Bond movie, the rather cool “Goldeneye,” the movies just got worse and worse. That seems to be the way with each new Bond actor: a promising start, then a decline in the quality of the movies until MGM freaks out and finds a new Bond.

To test this theory I looked at the average ratings for each film from Internet Movie Database users. The average rating of the first three Connery films was 7.6; the average for the next four was only 6.7. The trend repeats with every actor (though there’s some fluctuation due to the overrated “Spy Who Loved Me”—I mean, a villain with steel teeth named Jaws? Bond on a Jet-Ski? Ahem!). Check it out (click to enlarge image): 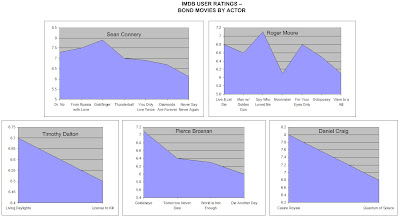 After the invisible car in “Die Another Day,” I actually decided to stop watching Bond movies altogether; fortunately, “Casino Royale” came along and rescued the series. Maybe the creators chose Daniel Craig—the biggest brute of all the Bonds—to make sure they’d completely flushed Roger Moore out of the franchise’s system. Or maybe Craig had laid out some contractual conditions for accepting the role:

o No pointlessly complicated kills, like scooping up a villain’s wheelchair with a helicopter and dropping him down a smokestack

o No supposedly clever but actually quite stupid quips (e.g., “Oh, you want to get off!” before dropping villain from helicopter)

o No remote-control or invisible cars, or similarly far-fetched gadgets

There’s so much going for this character, it’s a shame to see things spoiled by bad choices from the moviemakers. Take the motorcycle chase scene in “Never Say Never Again.” It’s pretty cool overall, but seriously marred by a non-cool motorcycle and, more egregiously, having Bond wear a helmet. A helmet? I mean, come on, guys! He looks like a dork! Of course in real life I support the use of helmets by motorcyclists, but Bond isn’t real life! What’s next: a scene of Bond as a toddler being strapped into his car seat? (Fortunately, MGM wised up, and Bond and his girl are helmetless in the motorcycle chase in “Tomorrow Never Dies.”

Speaking of bad scripts, it’s time I got to my dream. In the dream I wasn’t myself, I was Bond, the Daniel Craig incarnation, and the dream opened in medias res, spang in the middle of a ski chase. I wasn’t on some far-flung Alpine peak, either: I was at a ski resort, with recreational skiers going by every so often. Worse, I’d fallen, and was struggling to get my boot back into the ski binding. There was all this snow packed in there and for the longest time I just kept futzing with it. I was highly annoyed. What was I even doing at a ski resort? And why did everything seem tacky, like the eighties: teal-colored snowsuits and mirrored sunglasses? This was the lamest situation ever. What, did I have a gun hidden in my ski pole again to shoot the baddies with?

And then, suddenly, a villain came skiing by with a machine gun and strafed me. Only, he didn’t miss. In fact, in the fusillade I took like eight hits to the chest. I couldn’t believe it. I mean, I never thought I was invulnerable; I’d been wounded before, even tortured, and once almost got sawed in half by a laser … but to just be hit, multiple times, by simple gunfire, at point-blank? Unbelievable. I turned to Felix. “I’ve got like eight holes in my chest!” I whispered. “I’m gonna die!”

Felix dropped to one knee to check out my wounds. He looked me over, intently, puzzled, like he was troubleshooting something under the hood of a car. I realized, probably at the same moment he did, that I wasn’t spouting blood like I should have been. Bulletproof vest? No, I hadn’t worn one. I probably should have. Where had I seen that? Ah, right, it was an episode of “Starsky & Hutch” I saw as a kid. You see Hutch get shot and he crumples to the ground and you think your hero is dead, and then suddenly he's okay because—aha!—he had a bulletproof vest! Why were they showing that on TV? Is that anything our children ought to be seeing?

Finally Felix spoke: “You were shot at such close range, the bullets have cauterized the holes. You’re not going to bleed to death.” I must have looked hopeful because he quickly added, “But you’re still gonna die!”

Unlike the standard plot, where I get myself out of one terrifying scrape after another, now I found myself in a long, slow, depressing dénouement. Q fitted me with a (very basic) heart rate monitor, and over the next few days I watched with bitter resignation as my pulse rate dropped progressively lower. I received no actual medical attention, as it was universally acknowledged I was a goner, but more and more medical researchers began following me around, documenting my amazingly slow death. Now and then one would take my vital signs, and once or twice somebody held a stethoscope to my back and had me cough. Nobody wore surgical masks; after all, my bullet wounds weren’t contagious. The researchers’ overall response was that of fascination. I never actually died; I suppose the dream ended when I (or rather, Dana) woke up.

I’m not of the belief that dreams are actually that useful in gaining an understanding of the self. I truly believe that many, if not most, dreams are completely nonsensical, and ultimately mean nothing. Sure, our subconscious is involved, but so is pure chance. Did my subconscious start meowing outside the bedroom door at 3 a.m. and make me dream about my cat? No, the cat did. Did my subconscious tell me to eat all that spicy Thai food right before bed? Did it tell me to watch “Let the Right One In?”

That said, this dream offers a fairly obvious interpretation. Bond—though intelligent, unflappable, and constitutionally solid—does not know how to die gracefully. Watching himself slowly expire, he is, for the first time, completely powerless. He could insist on having his dignity respected, but what would be the point?

If my subconscious is trying to tell me anything, perhaps it’s that in denying the inevitably of my own death—which I certainly do—I am engaging in pure fantasy, no less so than when I daydream about being James Bond. To which I say, so what? By the time the next Bond movie comes out, the franchise will be fifty years old, but Daniel Craig will be only be forty-four, and I’ll only be forty-three. I’ve still got time.