While much of America is taking part in the age-old tradition of new year’s resolutions right now, I’m following my own tradition of pondering the matter without actually coming to any conclusions or committing to anything. This post documents that struggle.

Part of my issue is that the most obvious resolutions aren’t available to me. Googling top-ten lists of resolutions, I see the same things every time: lose weight, quit smoking, exercise more, drink less alcohol, get out of debt, spend time with family. This low-lying fruit is beyond my reach. My body-mass index is spang in the middle of normal; I exercise like crazy; I’ve never smoked; medical studies suggest I should perhaps drink more alcohol than I do; and so forth.

You might assume that I therefore think I’m just fine as-is. Actually, I don't; rather, my shortcomings simply aren’t the garden-variety ones. While other people are clear and resolute in their desire for self-improvement, I’m just stagnating here, for lack of imagination. Surely there are ways for everybody to improve. So on New Year’s Day I asked my brother Max—an accomplished practitioner of nonstandard thinking—if he had any new year’s resolutions. To my delight, he’d written out a hundred of them the night before, which he read to me over the phone. Here are some highlights:

12. talk to people by creek

92. if I get a bloody nose, put a cold towel on the back of my neck and tilt my head back

Several of these, particularly #38, tripped my irony detector. Max has never played golf in his life, and isn’t about to start. I had to ask about #25, “cut off arm.” I said, “Wait … cut off arm?” Max replied, in a tone of pure resignation, “Yeah….” My favorite item on his list was #93, “We don’t want any replays of what happened last year.” He delivered this in the same scolding-woman tone as he used for his follow-up comment: “As long as we’re changing the calendar we might as well make some other changes.” (I know what you’re thinking: he should be the blogger of the family. I agree! Here’s a picture, by the way, of the two of us.) 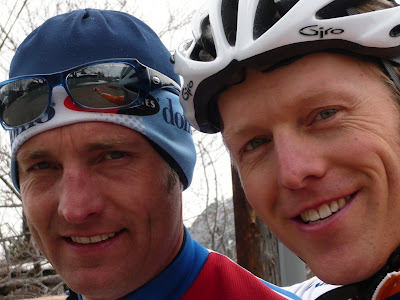 New year’s resolutions remind me of perennial magazine articles like “Ten easy steps to improving your fitness!” and “Five anti-ageing secrets!” If these easy techniques really worked, they’d have long ago become mainstream and the articles wouldn’t have to be recycled continually. Unsurprisingly, when I looked at online lists of the top ten new year’s resolutions over the last few years, they were all the same.

I got a fortune cookie fortune once that said, “Hell is paved with good intentions.” Not the road to hell, as the saying goes, but Hell itself. I love the image of a flaming underground chamber with the standard rivers of fire and everything, but dotted here and there with exercise bikes, Soloflex machines, and crock pots. Every so often amidst the fire pits you’d see an abandoned home-improvement project. Everyone down there would be a grad student still working on his thesis.

I can’t help but reflect that the people who have the easiest time coming up with new year’s resolutions are the ones who have allowed their obvious failings to persist and accumulate unmitigated all year long, like dust bunnies under the bed. I mean, if you’re doing something you know you shouldn’t, or are failing to do something you know you should, why ignore it until this arbitrary January timeframe? Why wait to correct your behavior? Why shouldn’t the self-improvement process run all year?

At the same time, I think the earnest, all-together-now spirit of these resolutions is kind of sweet. I went to BoozeMo recently, and couldn’t believe how empty the parking lot once. Normally it’s packed. It was like a ghost town in there, and every single thing I bought was on sale. The cashier said it’s the same every year: slammed on New Year’s Eve and dead after. Similarly, my brother commented on how crowded the gym gets during January. It’s a special time of year when most of the nation unites in a group self-improvement project.

My goodwill toward new year’s resolutionists heightens my own anxiety about not knowing what, in myself, to address. It would be dangerous to decide I’m satisfied. Whatever little satisfactions we have in life would probably end up being sources of actual guilt if we just stepped back and saw the bigger picture. The happy consumer, thrilled with that new iPad, would probably be shocked to know how truly insufferable he or she really is, seen from the eyes of the person on the receiving end of an unsolicited demo. The person who gets great satisfaction from recycling a huge passel of plastic bottles is missing the point—that he or she should be drinking tap water to begin with. Doubtless there are a great many ways in which I could be improving; I just lack the vision to come up with them. Why is it so much easier to come with ways for other people to improve?

Having scoured my brain, I’ve come up with some candidates for new year’s resolutions:

1. Be more insightful into my own shortcomings

The first item suggests itself to me right away, just as a New Year’s Day hangover suggests “drink less” as a resolution for so many. But I’m not sure “be more insightful” would go the distance as a resolution; it might actually make things worse by leading me into self-absorption or the kind of self-flagellation that would interfere with resolution #8. I’m going to let those two kind of cancel each other out. That’s okay, I still have eight left.

Saving money isn’t a resolution I feel I can truly commit to. First off, I’m not exactly a rabid consumer to begin with. (I almost made a resolution to buy some new socks—I’ve been wearing the same eight pairs of brown socks for the last five or six years—but I felt it too trivial.) Meanwhile, servicing my Bay Area mortgage makes a money-hoarding goal kind of laughable. And then there’s the matter of another resolution I considered, which was to do my part to save our nation’s economy. Finally, saving money conflicts with item #4, eating out (which, meanwhile, clashes with another near-candidate, “spend more time with family,” because my wife hates pizza and my daughter Lindsay dislikes restaurants). I’m going to scratch this one.

Take a class … this could cause stress, but might help me enjoy life more. I’m going to keep it.

Reading more to Lindsay is actually problematic. I enjoy it, and she enjoys it, but I might actually be interfering with her education. She’s just learning how to read, and can handle the simpler Dr. Seuss books and the like. But intellectually she’s much more interested in books like Black Beauty and Clarice Bean Spells Trouble and it’s hard to see how my reading these to her will encourage her to go read basic picture books on her own. This resolution may fail the sustainability test as well—after all, once Lindsay is able to read on her own, my read-aloud tradition will vanish and I’ll have to read to the cat.

Helping others … this I have some experience with. In my high school health class the teacher tasked each student with assigning himself a Health Behavior Change (HBC), and each of us had to report weekly to the teacher on our progress. After I nailed my first HBC, flossing my teeth (a regimen I faithfully continue to this day), I was at loose ends as to my second HBC. I asked the teacher, “Can our HBC be to help a friend with his HBC?” The teacher said, “That’s a great idea. What, do you know someone who’s trying to quit smoking?” I gestured to my friend at the next desk and said, “No, I want to help Sean floss.”

Kidding aside, helping others is really tricky. It takes either money (a conflict with #2) or work (a conflict with #8) and moreover requires, and/or fosters, a certain amount of ego-bloat. Who am I to decide I have what it takes to be somebody’s savior? I once gave a homeless guy some change but he turned out to be a (shabbily-dressed) construction worker on break. He correctly fingered me as a do-gooder college kid and said, “Man, you guys are conditioned.” That doesn’t mean I shouldn’t give change to (suspected) panhandlers; I just have to be more careful. So I’ll do the basic stuff, like giving to charities or guiding a blind Bart passenger to his seat, but I can’t commit to a new better Dana who makes helping others a major life goal. I’m sorry but that’s just the way it is.

Being less messy pertains to how much food I get on my face and clothes when I eat, and to how much I splatter when I pee standing up. There’s much room for improvement here, and I expect that I can actually make some progress. After all, I never used to have to wipe my mouth with a napkin so much, or clean up the toilet seat every time. Either my skills are waning over the years, or I have always been messy and just didn’t realize it until now. So I’ll try to eat more slowly and aim better, but this isn’t destined to be a perfectly satisfying new year’s resolution. I’m still more interested in other bad behaviors I’m ignorant of now but will identify and target in the future.

Item #9, I will not lose … ever, does not refer to an actual goal (after all, I graciously lose all the time), but to my beer-swishing mantra. To properly pour a Belgian-style beer, you gently pour two-thirds into a glass, swish the rest around while reciting your personal mantra, then pour the rest. (A brewery provides these instructions, minus the mantra part. I’m not sure where I got that.) I’ve found through trial and error that “I will not lose … ever” is just the right length for a mantra. So this resolution is about enjoying beer more. I think it holds great promise.

The last resolution, keeping a journal about my kids, fails the new year’s resolution applicability requirements simply because it’s nothing new—I already do this. I just need to be better. You know those baby books, listing height, weight, first words, and so forth? They’re like a poster child for unfulfilled intentions. The harried parents (which would be a good name for a rock band, by the way) usually begin neglecting this project almost instantly, and when the kid comes across the book decades later he’s bound to be disappointed at how little is revealed about his earliest years. So I’m fully on the hook for this resolution.

It looks like in 2011 I’ll be focused on taking a class, aiming better, enjoying my beer more, and writing more in that journal. If I find, three months in, that I’ve mastered each of these projects and am feeling dangerously satisfied about it, I suppose I’ll have to take up smoking, week-long benders, and Boston kreme doughnuts. After all, I have next year to think about.