For me, Father’s Day is almost like a birthday: I can enjoy others fussing over me a bit. But beyond that, it provides a nice lens for self-reflection about my role as a dad. If a blog post on such ruminations sounds tedious, fear not: I’ll try to keep it light, like a soufflé. But not as chichi as a soufflé. Maybe more like a cake. Maybe like a cake that a girl jumps out of, but without being tacky.

Although this is kind of my day, I’m also a son, so I have my own duty to carry out. It’s never easy for me to find an appropriate Father’s Day card for my dad. I comb through all the cards and none seems appropriate. The same clichés appear over and over on card after card: the necktie; the hammock; the golfing; the fishing; the pretend report card. The printed sentiments are just as hackneyed: “You were always there for me”; “Thanks for everything”; “The best dad in the world!”

The composite father suggested by these cards is a devoted family man, sharp-dressed, hard-working but alternately leisure-seeking, who dispenses cash like an ATM, drives a cool convertible, fixes stuff around the house, leads his kids in the kind of fun activities that Norman Rockwell liked to paint, and spends his weekend lying around when he’s not golfing.

None of these match my actual dad, nor me, nor just about any actual dad I can think of. I finally found a decent card with a stylized drawing of a penguin on it. The penguin kind of looked like James Bond—the Daniel Craig version. It’s a pretty special card that can make a penguin look like a badass.

There is evidence to suggest that a kid’s peer group has as much to do with his development as his parents. That may be true, but that doesn’t mean a father shouldn’t do his best. And I’m pretty sure I’ve seen signs of my influence on my two daughters.

One example that comes immediately to mind is my daughter Alexa’s first word, which was “no.” Did she necessarily get this word from me? Well, I think so. Neither her mom nor I was probably telling her “no” at that tender age, for two reasons. One, babies cannot be expected to obey—they are pure id. Second, what could a parent really take exception to that isn’t completely hardwired? In other words, what do babies do that they really shouldn’t? A parent cannot say “No!” when the baby dribbles mashed peas down her chin. It wouldn’t be fair. Babies lack the motor skills to do any better.

I highly suspect that Alexa learned “no” from hearing me bawl out the cat. But wait, you’re saying: didn’t my wife also bawl out the cat? Yes, but not with the same inflection. ’s tone with the cat, in such circumstances, is certainly sharp, but not as booming as mine. Even as a baby, Alexa captured something of my cat-chiding essence. She even pointed at the cat, just like I always did.

Okay, you’re saying, maybe Alexa was particularly impressionable and this has nothing to do with father/offspring memes. Not the case: after giving the matter much thought, I realized that my own tendency to berate the cat is modeled on the example my father set. Growing up, we had a much-loved Siamese chocolate-point named Mulla. My dad, being terribly allergic to cats, couldn’t hold or pet the cat much, but he did get some pleasure from bellowing at the cat about his—the cat’s—feasiliness. I never fully understood what “feasily” meant, but our cat was apparently the epitome of it. “You are feasily! Yes, you!” my dad would say sternly, as Mulla looked back opaquely. Or Dad would spontaneously shoot the cat a look and say, “Feasil-thing!”

I’ve never accused my tabby cat, Misha, of being feasily, but my utterances have much the same peculiar spirit as my dad’s did. I’ll frequently boom, “You are a part of the rebel alliance and a traitor!” Her scavenging of table scraps earns my sharp invective: “Look at you! You’re supposed to be a proud, powerful hunter, not a shameless scavenger! You are a disgrace to your species! Yes, you!” Even when she’s innocently lounging in the sunshine, I can be acidly sarcastic: “You really need some rest, puss cat—you’ve been pushing yourself too hard.” It’s all uncannily similar to my dad’s faux-scornful feline obloquies. 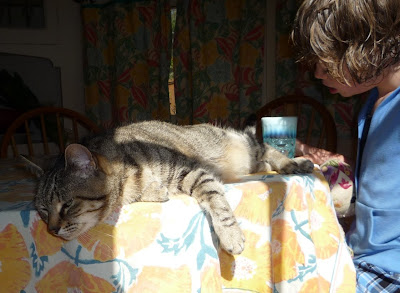 Okay, so cat-bashing behavior may follow the father’s example—big deal. Is there meaningful behavior passed from a father to his offspring? One very important example comes immediately to mind: television policy. Growing up, my three brothers and I were forbidden to watch TV. We did own one: a big black-and-white Panasonic with a blown-out speaker. My brothers and I tried to watch it on the sly, but were sloppy and got always got caught. To prevent recidivism, my dad hid the cord. We hunted around until we found something compatible, which was the cord to his slide projector, and when he caught us again he angrily cut it into pieces, not realizing what it was.

Determined not to be foiled again, he then removed all the knobs from the TV. After that, we took turns being the one who had to endure powerful electric shocks from reaching into the box with needle-nose pliers to work the controls. Through this experience we learned a) resourcefulness, and b) ultimately how worthless TV is. (When my mom bought a nice Sony color TV during the ‘80s, my dad gave up, and we rotted our brains out for years before realizing our dad had been right all along.)

If my dad hadn’t made the TV officially off limits—if, in fact, my family all sat around watching TV together—perhaps it wouldn’t have occurred to me to forbid my kids to watch it. But, seeing my dad’s point, I can take advantage of the evolution of TV by going one better and making it impossible for my kids to watch: we don’t have cable. In fact, with much delight I had the opportunity to explain to them, a year or two ago, the concept of a broadcast. They’ve only ever had VHS/DVD videos and were unaware that there are boxes in people’s homes that you just turn on and then sit back and have your brain extracted automatically. They haven’t thought to question whether or not “vidiot” is a real word. And like all kids deprived in this way, they drum up their own amusements. 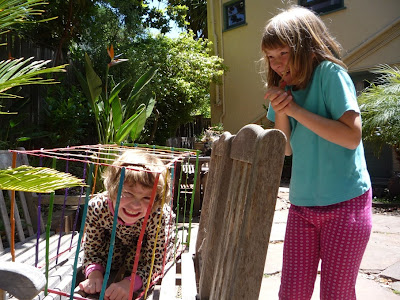 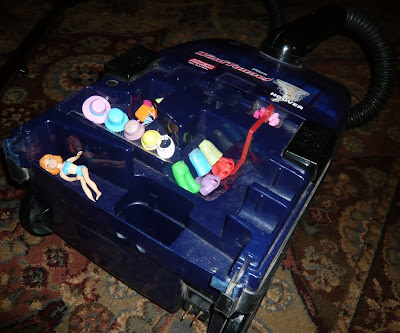 Obviously most families don’t have such a prohibition of TV, but that’s just on example. There are countless others; consider Jerry Seinfeld’s comments on his dad’s thermostat proscription: “I didn’t go near a thermostat until I was 28 years old. I was in a hotel room somewhere when I finally got up the guts to move it a little bit. The whole night I couldn’t sleep. I was afraid my father was going to burst in the door, ‘Who touched the thermostat in here? You know I set it there for a reason.’”

As a parent, I cannot resist lecturing my kids, as they are such capacious vessels for knowledge, and are (so far) a willing audience. I do strive to accurately discern whether or not my kids are following me, and will abandon a topic (e.g., the day’s Tour de Suisse stage) if I sense I’m losing their attention. I’ll ask straight out if they’re interested, and sometimes they say no.

Still, I really don’t expect—perhaps I don’t dare expect—that my kids actually listen and absorb what I’m saying, and I’m tickled when I discover that they sometimes actually do. For example, I was reading to Lindsay recently and paused to test her comprehension: “Should Clarice tell Betty about the movie tickets?” Lindsay answered, “No, because Betty is moving away and wouldn’t be able to go.” I said, “Right. We know Betty is moving away, but Clarice doesn’t. What is that an example of?” Without missing a beat, Lindsay replied, “Dramatic irony.” That’s my girl!

Frankly, it seems almost too good to be true that a day is set aside to celebrate fathers, because between you and me, it’s pretty easy gig. Sure, the modern dad is on the hook for changing diapers and a lot of the housework (which my dad’s generation mostly weaseled out of), but many of us still get the plum assignments. For example, when I cook a meal, I don’t have to worry about it being particularly nutritious, because I’m not the main cook of the household anyway—whatever I serve can be classified as “treat” and is thus exempt from the family’s standards for a healthy lifestyle. Lunch today was my special Corn Goo Pasta, a starch-bomb if there ever was one. (Recipe is here.) I remember my cousins talking about how much they loved their dad’s macaroni and cheese; when I asked how he made it, they conceded that it really only had two ingredients: macaroni and, well, cheese. It was the fact of his making it that somehow made it special.

Meanwhile, there’s still an inequality in the running of a household that generally favors the male. I’m talking about that game of chicken couples play: who can withstand squalor for longer? I certainly pull my weight where dishes are concerned (possibly in part due to my special relationship to our dishwashing machine) but in several household realms I can turn a blind eye for much longer than my wife. Where mopping in particular is concerned, I can always outlast , having learned, in my college days, the golden rule of kitchen floors: Don’t Look Down.

This household chore inequality frees me up for interesting “special projects,” such as cleaning my bike, in which I can enlist the support of my kids. Teaching them bike stuff—traditionally the realm of the male—is especially rewarding because I get societal credit for transcending outdated gender roles even as I exploit them. 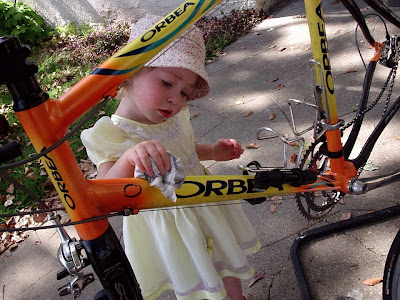 All this merriment aside, I must confess that it’s possible to take Father’s Day too far. A couple years ago, I spontaneously decided to join a friend for the annual Nevada City Criterium that is held on Father’s Day. The timing, in my case, was terrible—the following day my family and I were leaving for a two-week vacation and hadn’t yet packed. I played the Father’s Day card and my wife let me go, but the aftermath was not pretty.

This weekend, I thought of weaseling out of some window washing and hedge trimming, based on the Father’s Day loophole, but I knew that would mean doing these chores during the week, after a workday. That would be pretty harsh. So, I finished these tasks today, so tomorrow I can be lazy and useless. I almost wish I had a hammock to lie in, or knew how to fish.