In an invitation my wife Erin sent out for my fortieth birthday party a couple years ago, she wrote, “He likes to talk, likes to ride his bike, likes to talk while riding his bike, likes to eat, likes to drink, likes to eat while having a drink. In short, he likes to overeat, over-drink and over-ride. All of which lead to pain and suffering, which he likes best of all. Don’t you?” It’s all true, but what she didn’t mention is that I also I like to write, and what better to write about than riding bikes and eating? In that spirit, in 2006 I wrote my first bike club e-mail Race Report, after the UC Berkeley criterium. If you can’t envision yourself wading through a bike geek’s description of attacks, team tactics, and excuses, fear not: my report diverges sharply from the traditional race report format. I run it here, in its entirety, because it ties in perfectly with an upcoming post. 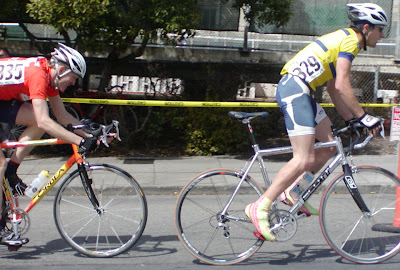 Right after the race, Dave, Robin, , Alexa, Lindsay and I headed over to Mario’s La Fiesta. The waiter was cool enough to let Dave stash his bike in the back among the ripening avocados, bricks of lard, sacks of rice, etc. Perhaps I was enjoying residual endorphins from the race, because I was able to eat vast amounts of La Fiesta’s fiery salsa without feeling one particle of pain. The chips were thick and crunchy, not like those absurdly flimsy paperlike things at Chevy’s. La Fiesta can be forgiven for not having Dos Equis Special Lager, because they tolerated my children, and the stench of Dave’s and my sweat.

The soup arrived, with spaghetti instead of the tiny starlike pasta it normally has. I didn’t get to taste it, as my kids were all over it. But when a little kid won’t share with you something comprised mainly of vegetables, you know the cook is doing something right.

Robin had the carne asada burrito, which was larger than a human head. Okay, not really, but larger than any other burrito on the market. She pronounced it “very good” and if she didn’t expound at length it’s perhaps only because her mouth was full.

I created my own combo: chile relleno, enchilada verde, and flauta. The chile relleno was plump, zesty, and nicely battered: not too eggy and not soggy. There’s a thin red sauce, almost a broth, on the relleno that I’ve contemplated at length: it must somehow be a perfectly fluid rendition of lard, for it has that knock-down flavor that vegans cannot synthesize no matter how assiduously they worry and molest their ingredients. The enchilada was much better than what many of you have had at my house; when prepared as is single unit, as is done at the restaurant, the enchilada has a perfection that the casserole format of large-scale take-out cannot
achieve. The chicken was all dark meat, which the non-deluded among us recognize as superior to the comparatively dry, insipid white meat that Hungry Hunters and Olive Gardeners think is the way to go. The flauta was perfectly crunchy, its chicken filling nicely peppery, and it was generously covered with guacamole. There were only two problems with this dish: first, the guacamole’s exquisite, whimper-inducing perfection threw me into the quandary of whether or not it was too late to get a large order of guacamole for the table; and second, by this time in the meal my passion for the food was so mightily kindled I found it impossible not to forget my manners and pick up the flauta with my fingers, driving it into my mouth like a large branch into a wood chipper. Fortunately, my kids created a nice diversion, lustily tearing into portions of a grilled burrito: for just a few bucks, it’s a nice combo of beans, rice, chicken, and cheese folded into a tortilla that the cook must butter before throwing it on the grill because it has a wonderful guilty-pleasure-greasiness that kids love and parents can’t help but snitch from.

Dave had a big pile of cubed meat on his plate and I never got around to asking him about it; granted, he’s not a big proponent of lengthy race reports, but perhaps we can persuade him to comment. had the number five, the chile relleno/enchilada verde duo, and she was busy enough with Lindsay that she neglected to rave. I can say that very few of her leftovers made it to me, which is a sure sign she liked it (given La Fiesta’s massive portions). I did get part of ’s relleno casing, which arrived just in time to throw on the pile of beans, rice, and enchilada/flauta shrapnel that I love to load onto a fresh grilled tortilla until the thing becomes almost impossible to manipulate without spillage.

All in all, the UC Berkeley alumni criterium was superb preparation for getting the maximum pleasure out of a great meal. Next year, I hope to see more orange jerseys stinking up my favorite restaurant.