I took a trip to Colorado recently to attend a Red Zinger / Coors Classic reunion and watch a couple of stages of the US Pro Cycling Challenge, originally known as the Quiznos Pro Challenge. For those of you who like pretty pictures and not a lot of text, this is the post for you.

A big bike race is a great place to run into cycling notables. After a protracted parking effort in Vail, during which my brother Max and I lost, then later recovered, a grapefruit that had rolled off the dashboard and out the window, we finally made it to the start line of the opening Pro Challenge stage, a hill climb time trial. Upon our arrival we spied four important cycling people, without even scanning the crowd or having to turn our heads: 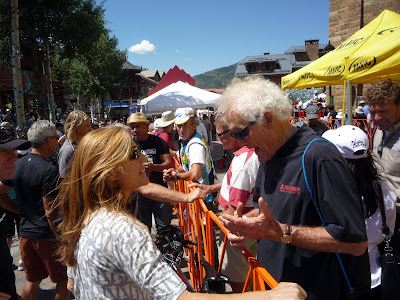 The redhead is Marianne Martin, the winner of the first Tour de France Féminin. She’s talking to John Howard, former Red Zinger winner and holder, for ten years, of the bicycle speed record (152 mph). Zoom in on the photo. In the background you can see, in the black shirt and tan hat, Scott Berryman (former national champion track cyclist) and, on his left wearing a cycling cap, Jonathan Boyer, Zinger/Coors winner and the first American to race in the European pro peloton. Not bad for a random snapshot, eh?

Next, I stumbled upon two very distinguished young athletes: Obed Ruvogera and Jean de Dieu Rafiki Uwimana, who traveled all the way from Rwanda to watch the US Pro Challenge: 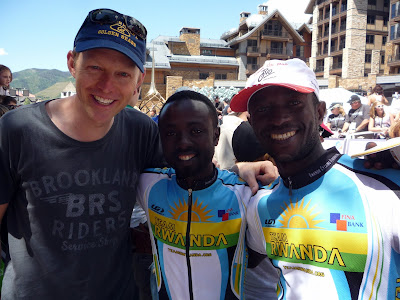 These guys are part of a team that Jonathan Boyer is running, which recruits the most promising Rwandan athletes and rescues them from poverty. I’d read about them in a “New Yorker” article six weeks before. What a trip to see them in person! It caused me to reflect on how as a kid I dreamed of having a real racing bike and being good enough to do it justice. This wasn’t such a lavish dream for a kid in my circumstances, with paper route money and top-notch food, shelter, and kid-oriented races. But these Rwandans came from a much more humble background. I can only imagine their excitement to be given an opportunity to be bike racers.

This next photo tells you almost all you need to know about bike racing: 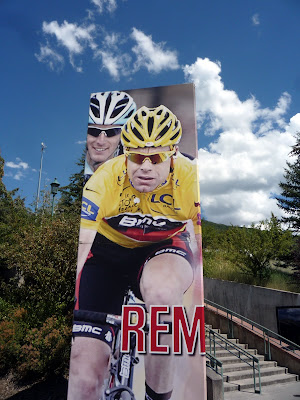 After watching some of the early racers take their turn against the clock and the mountain, Max and I wandered into the area where team vans were parked and riders were warming up. We immediately spotted a young, up-and-coming American pro, Peter Stetina.

Though we’d never met Peter Stetina, we recognized him right away because he looks a whole lot like his dad, two time Zinger/Coors champ Dale Stetina. Dale coached a number of young riders, including Max and me, in the early ‘80s. Peter’s relatively low saddle height may be a subtle form of rebellion against his old man, who favored a higher saddle.

Next we headed over to the BMC trailer, just in time to see Cadel Evans appear and climb on his bike to warm up. Evans is ranked #1 in the world, having just won his first Tour de France this past July.

I have to wonder how many sports fans can get this close to the top athletes for their sport. I’m guessing it would be next to impossible for a football fan to get this close to the quarterback of the reigning superbowl-winning team. Not because American football is a bigger sport, of course; it isn’t. Cycling is the number two sport in the world (behind soccer), and a far cooler sport than football or any other. You don't have to agree with this statement, of course; you’re entitled to your opinion even if it’s wrong.

Aerodynamics are important, even on a stationary trainer: 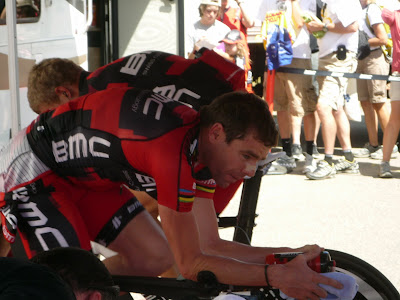 Here, Evans gets information about the time trial course from a teammate, fellow Aussie Timothy Roe, who already raced it:

Here is the American champ Christian Vande Velde, who came within half a second of winning the time trial: 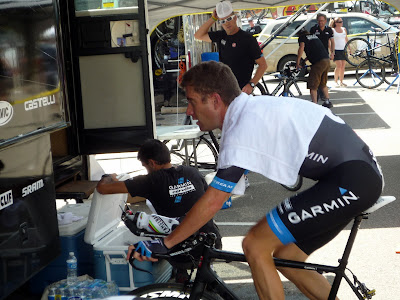 Vande Velde probably would have won but I think he was distracted in his warm-up by some damn amateur photographer. It’s a pity; I was really rooting for him. Still, second place among this field is highly impressive.

The next race we watched was the final stage, which started in Golden, Colorado, home of Coors beer. Coors is unique among major beer companies in that all of it is brewed in one brewery, rather than being farmed out to independent outfits the way Bud, Miller, etc. are. 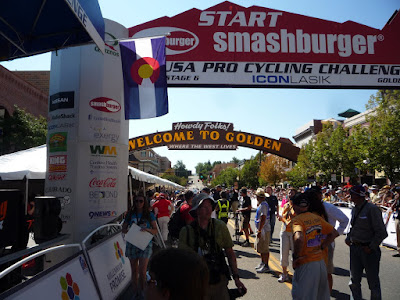 Now, you might assume that, me being a Bay Area resident, I’m a snooty microbrew and import-beer guy. Well, look here: 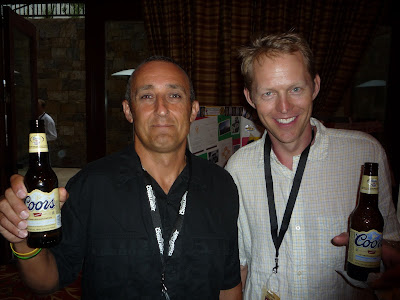 There I’m enjoying an ice-cold Coors with Roy Knickman, a Coors Classic stage winner, at the Zinger/Coors reunion, which took place the evening of the time trial.

Incidentally, Smashburger and Quiznos are owned by the same company, which is why the name of the race was genericized from “Quiznos.”

When my brother Bryan saw the Golden start line photo above, he remarked, “I just love the Howdy Folks! sign. I snickered (while I roasted to death in our pre-AC Saab) during my first time into Golden, and I guess I'm still snickering at it. Must be that snobby Boulder thing.” 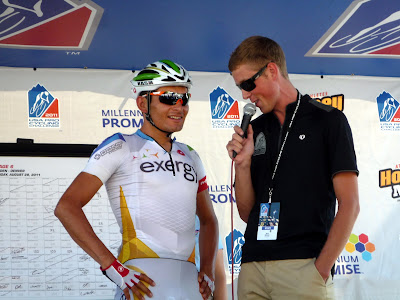 It’s always fun to see, at a big pro race, a guy you’ve ridden with in recent times. (I actually sprinted against Freddie, as I related in this blog in “Tale #3” here).

Freddie went on to finish a very respectable third in this final US Pro Challenge stage.

In case you couldn’t hear that clearly, Evans called this “the most fun I’ve had racing for years.” He would go on to finish 7th overall in the US Pro Challenge … not bad for not being adjusted to the altitude.

A rider who may not have had as much fun was Ivan Basso, Giro d’Italia winner and Tour de France runner-up: 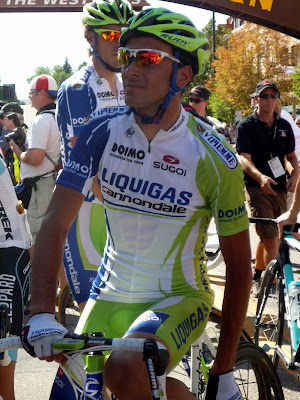 Basso finished 35th, over seven minutes down. Another rider who may have been disappointed was Fränk Schleck, who ended up in 13th overall: 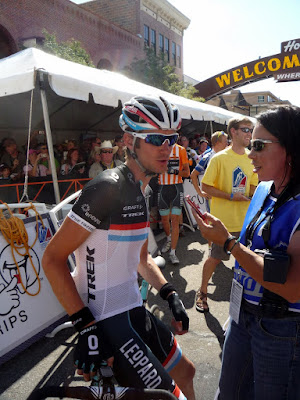 Here is the ever-popular Jens Voigt: 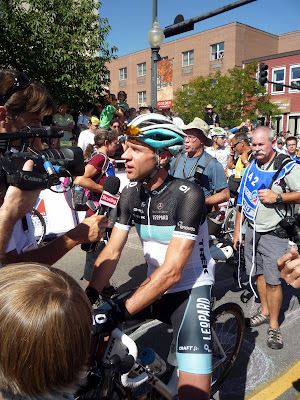 My theory about why Voigt is so friendly and good-spirited to the media and his fans ? I think he suffers so badly on the bike that whenever he’s not riding he’s practically euphoric from relief.

Of course my photo essay wouldn’t be complete without a shot of race winner Levi Leipheimer: 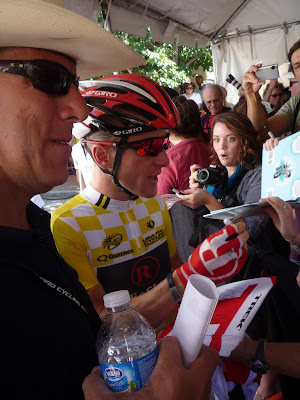 I love the star-struck woman in the background. I wonder if she got a photo of me looking similarly star-struck, or at least looking amused (by her, though she wouldn’t know that). Moving on, here’s another amusing photo: 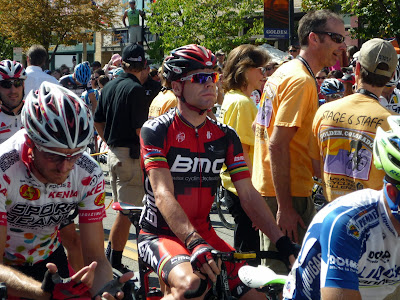 Cadel Evans stays focused, but on his right, a Jelly Belly rider looks at his hands and thinks, “What have I DONE?!”

After the requisite singing of our national anthem, the organizers started the race. On time, I might add.

Before leaving I took a picture of the sign-in sheet. How many names can you make out? (Of course you'll want to zoom in. That’s true for all these photos, of course.) 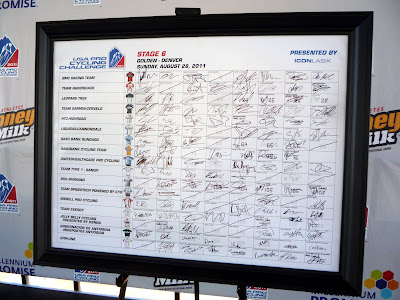 By my count, twenty riders had dropped out prior to this stage. I can’t blame them; given the heat and altitude of Colorado, I didn’t even have the energy to head to Denver for the stage finish. (Actually, parking was the biggest deterrent. After that brutal parking effort in Vail, Max and I, and our grapefruit, had had enough.)