The Everest Challenge is this weekend.  This fills me with a combination of excitement and dread.  Mostly dread.  It’s kind of like that back-to-school feeling all the kiddies went through this month, except EC is more intense.  Imagine packing all the trials and difficulties of a school year into one weekend.

I had my best week of training recently:  29,000 feet of vertical gain.  Well, EC has that much climbing in just two days.  Cyclists are, by and large, an analytical bunch, and I could easily find all kinds of statistics to support the notion that I’m doomed.  And yet, having finished this race three times already (click here, here, here, and here for details), I’m actually pretty confident.  (Not entirely, though—more on that later.)

My friend John is coming out from upstate New York to do this race for the first time.  He’s a bit nervous because there aren’t that many hills to train on there.  He lived in Berkeley for awhile, so he knows how good the riding is here.  (Mount Diablo, a 10-mile climb reaching 3,800 feet, is particularly good EC preparation, as is Lomas Cantadas, a two mile climb with an average grade of 11%.)  John e-mailed me with some misgivings, and I replied with a little pep talk which I’ve decided to embellish a bit and post here, for two reasons:  a) some of my readers may be doing EC or something similar at some point, and b) the gist of my pep talk could apply to all kinds of difficult undertakings, not just sport.

Here is a photo of John from the last time we did an epic ride, which was the Markleeville Death Ride in 2000.  He’s on the right; my brother Bryan is in the middle.  We’re wearing garbage bags because it was chilly and we didn’t bring warm clothing for the final descent. 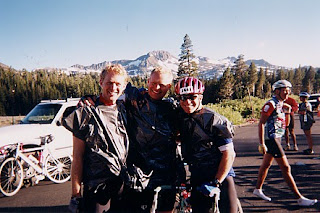 I’m more nervous about this race than I’ve been before, probably because I’m coming back from a major injury.  For me, more is at stake this year:  this isn’t just a race, but proof that I’m back (or that I’m not).  I’ve spent this week in an elevated state, something like a continuous fight-or-flight reflex.  It feels like I have a cold as well, though I felt the same way last year and a few other times before major events.  Perhaps my body is faking illness to make sure its master (i.e., my brain) gives it all the rest it needs.  Meanwhile, I’ve become obsessive about my bike, wanting to fix everything but not touch anything.

The truth is, everything could go perfectly and still it would be absolutely grueling.  My friend Craig (who’s also doing EC) remarked, “Perhaps it’s a curse that your specialty is being good after 100 miles and 10k of climbing—you wouldn’t have to suffer so much if your specialty was a 12-second track event.”  I’m also anxious about some mishap (illness, mechanical failure) stymieing me.  Devoting so many weeks of hard training to a single event really leverages you emotionally.

John, on the other hand, is a bit worried about finishing (despite winning a race this year and getting third in another).  He’s studied the course profile carefully, and said in his e-mail, “I can’t stop thinking about EC.  I climb a lot of hills around here, but they’re all a lot shorter….  You love Lomas Contadas.  Looking at Strava, I can’t fathom why anyone would love that hill—it looks ridiculous. It looks pretty equivalent to Blakeslee Road here in Ithaca (if you want to look it up on Strava), and I frickin’ hate that climb. I’ve only done it twice:  it totally kicked my ass the first time, so I swore off it. Then I rode it on Sunday just to prove to myself that it didn’t own me. Well, it did (own me, that is).  If there are sections [of EC climbs] that get over 12% for any length of time, that will totally mess with my rhythm and my head.  And my legs.”

On the face of it, both John and I are over-thinking this thing.  But there’s no point commanding ourselves to stop; it wouldn’t work.  There’s no daytime equivalent to counting sheep until our preoccupations fall away.  What’s needed is to rethink this thing, to keep from falling into the same well-worn ruts of thought that make us worry.  A shift in perspective, away from the analytical, is in order.

The limitations of analysis

We can analyze the EC climbs, Strava data, our own training experience, etc. all we want but it won’t really make much difference at this point.  The fact is, the EC is fricking hard, and there’s no way to totally prepare yourself.  My own training hasn’t approximated either stage of EC, but then it hasn’t any of the other times I’ve done the race.  Nobody ever said the training has to be as hard as the race.  Training never is.  The human body always holds something in reserve to make up the difference.  Plus, for once we’ll be rested and fresh, instead of doing a big ride when our legs are already tired.

It is true that I love Lomas Cantadas.  The very reason I love it is that over time it has helped to forge in me a rare and useful trait:  grace under pressure.  I don’t have gobs of this trait, but more than I used to.  This is probably the only part of cycling that I have gotten better at with age.

When I was dusting off my old Odyssey ‘91 story for this blog, I was struck by how much of the difficulty of that ride was just me panicking every time the road went uphill.  Recently I did several of these climbs again, during my “Non-Death-Ride Non-Warmup,” a point-to-point ride to a place I’d only seen on a map.  I had no idea what climbing was in store, or even how long the ride would be; plus, I wasn’t even very strong yet.  And yet, it wasn’t a disaster.

The difference between Odyssey ‘91 and the Non-Warmup is that this time I was “tranquillo,” as the Italians say.  I was riding on about 10% physical ability and 90% resignation.  Resignation is totally underrated.  Sometimes I think I have a talent for resignation, but actually I think I’ve merely developed it by riding over Lomas Cantadas more than 500 times over the last seven years.

In that many trips up Lomas, I’ve never made it over without a struggle.  Sometimes the struggle is completely absurd—and yet I’ve never actually tipped over, or ground to a halt, or had to walk my bike.  Yes, I’ve occasionally yelled, “Spock!  Help me, Spock!” but I’ve never failed to make it over the hill.  I’ve tackled that climb several times when I was already shattered.  The trick is to pretend you have no choice and to take one pedal stroke at a time, riding like a robot.  Climbing stupid, you might say.  Not “climbing stupidly,” which I would never recommend, but “climbing as though you were stupid.”  Sometimes the brain just needs to be shut off (though actually I usually leave a few processes running, like the event logger that watches each half-pedal-revolution with astonishment and keeps track of the implausible ongoing progress).

Eventually, even an 11-percent grade ceases to seem like a crisis, and starts to feel normal.  Not easy, mind you, but normal ... as in, “the new reality is that my life involves a lot of suffering on this hill, and there’s no way around it.”  Fear is replaced by fatalism.  This helps because suffering itself is never the real problem in sport; fear of suffering is the problem.  Suffering is inevitable, but fear doesn’t need to be.

The point isn’t that you need to ride Lomas 500 times to be ready for EC.  The point is, during a hard climb, once you stop thinking things like “what if I can’t?” and “is this too much?” and “oh, no!” and switch to thinking either a) nothing at all, or b) “I will do this until it’s done,” then the ride—any ride—is doable.  If you pace yourself, and keep panic and despair at bay, and ride as though you could not fail, you will succeed.  It may take a very long time, and you may find yourself mired in misery, but that’s okay.  Suffering and misery will not stop you from succeeding.  Only fear and doubt and despair can stop you.

Here’s my brother Bryan lying in the road on the second trip over Ebbetts Pass during the 2002 Death Ride.  Sure, he’d had the stuffing knocked out of him, but that’s nothing a little rest can’t help, eh? 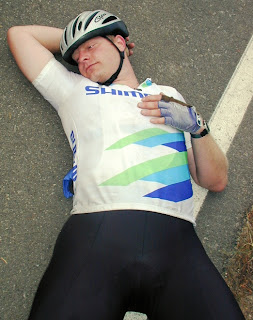 Even without routinely climbing a hill like Lomas, a rider can have faith that, once the physical preparation for EC is complete (or as complete as it’s going to get), the rest of the race is mental.  Not as in intellectual, but as in psychological.  “It’s all psychological” is of course a cliché, and I’ve been struck by how untrue it seems in the context of racing.  You can’t (or at least can’t reliably) beat somebody who’s stronger just because you pretend you can, or try harder, or whatever.  But you can certainly silence the wimp in your brain that starts internally whining and casting doubt on your operation.  The notion that “I might not be able to do this” is just a psychological trick your brain is playing on you, to get you to quit.  Framing your progress as a “can vs. can’t” question is just weakness.

(Obviously there are exceptions to this.  If you blow up completely, and literally cannot turn your lowest gear, and even lying down for awhile doesn’t help, then it’s no longer a psychological matter.  Or, if it’s 100 degrees and you’re not handling the heat well and you get goose bumps or something, then you need to quit to avoid heat stroke.  But these are very rare scenarios, in my experience.  It’s far more common for somebody to decide he can’t hack it, and either quit well ahead of total exhaustion, or sabotage his efforts by refusing to eat or drink enough, which reliably leads to total exhaustion and the mythical conclusion that failure was inevitable.)

I well remember my first EC.  I was good and scared about every climb, including the first one, and when I reached the top of it and still had good legs, I felt ecstatic.  The second climb, another out-and-back, was a lot harder than it looked.  When I saw my pals coming down it I assumed they were just really, really far ahead of me, but to my pleasant surprise the climb was over before I expected.  The last climb seemed endless and really beat the crap out of me, and I was worrying the whole time about the really steep pitches at the top, but when I finally reached them, they were more manageable than I’d expected.  I remember thinking to myself, “Is that it, mountain? Is that all you got?!”

The best part is, if you’ve paced yourself carefully and kept it in your pants, sometimes you (or at least I) feel strong like bull on the last climb, and it’s exhilarating!  On the flip side, if everything goes wrong and you suffer like never before, to where you want to curl up in the gutter in the fetal position, well, that also has value.  That’s vision-quest territory, and I’ve been there, too.  Just last year, in fact, while racing the Everest Challenge.
Posted by Dana Albert at 10:36 PM