I recently blogged about what cyclists eat when training for long races.  What I didn’t get into was whether any food or drink is off-limits to cyclists.  So, here goes.

First of all, the pros eat differently from amateurs.  Pro cyclists really watch their weight, because being anything other than freakishly emaciated disrupts the absurd power/weight ratio that makes them competitive.  That said, their diet isn’t exactly restrictive.  As reported in cyclingnews, world champion Mark Cavendish decided this year to trim down for the Olympics:   “I’ve stopped candy, soft drinks and ready meals.”

It’s also worth pointing out differences between the Europeans and Americans.  I understand they eat a lot of horse meat over there.  Much of the Euro approach strikes Americans as unscientific, being based on tradition and mythology.  For example, in the 1980s the French castigated Greg LeMond for having the audacity to eat ice cream—which was obviously terribly detrimental to his fitness—during the Tour de France, especially while he was in the lead.  To the French, LeMond’s decadence was an insult to the yellow jersey.  At the time, I figured, “Heck, LeMond is burning a lot of calories, he can get away with it.”  After all, I’d watched plenty of Coors Classic racers in Boulder strolling along the outdoor mall eating ice cream.

As it turns out, LeMond’s ice cream wasn’t just a treat.  I found this out in summer of 2000 when I happened to encounter him at the Nevada City Bicycle Classic, where we were both spectators.  It was either my birthday or his—we’re off by just a day—so he bought me an ice cream.  I reminded him of the flak he’d taken during that Tour for his ice cream indulgence, and he said, very seriously, “That wasn’t an indulgence, that was crucial.  When you’re racing at that level you’ve got to replace the calories.”  It turns out ice cream is an excellent sports recovery food:  plenty of protein and much-needed calcium. 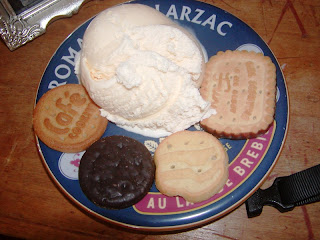 My friend John, who stepped up his training this year in anticipation of the Everest Challenge, told me recently, “These days I eat massive amounts of ice cream.  If I do a good ride, I’ll eat a pint of Ben and Jerry’s (about 1200 calories), guilt free!  Heck, I eat that much ice cream even on days when I don't ride!  But I weigh less now than I have in decades.”

So ... is diet really “anything goes” for us freedom-loving American cyclists?  Well, as I was reminded quite recently:  no.

Last Friday, I did a double-Diablo (digging myself into a deep calorie deficit), and then spent Saturday picnicking at a winery in Sonoma with a bunch of old cycling friends from SoCal.  While training for the Everest Challenge I don’t drink any alcohol—I figure my liver is working hard enough as it is restoring muscle glycogen—but I made an exception and had a teensy bit of wine.  More problematic were the lack of water (they were selling it, bottled, and I’m cheap) and the big bag of chips and other junk I ate all day.  My plan was to meet up with other friends in the area and go out for a giant Italian dinner to true up my stomach.  Instead, my friends served dinner at their house.  It was take-out dim sum. 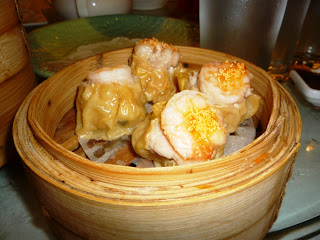 Now, I don’t want to complain.  I love dim sum and my hosts bought tons of it, being familiar with my oversized appetite.  Meanwhile, I teach my kids to eat whatever they’re served and I have to lead by example.  Plus, it was delicious.  It must be said, however, that dim sum is no way to carbo-load.  By the time you’ve eaten three or four thousand calories of it, you’ve taken on a ton of salt and grease.   By the time we’d driven home from the wine country, my normally invincible stomach was in turmoil.

I looked in the bathroom mirror:  a disturbing, and yet fascinating, sight.  I could see my ribs (being a cyclist, after all) but also this crazy sphere of bloat pushing out over my waistband, like I was a boa constrictor who swallowed a soccer ball.  In all my years of overeating I’ve never seen anything like it.  All night I was up chugging water, tossing, turning, roiling.  At 4 o’clock on Sunday morning I couldn’t be in bed any longer.  I got up and prepared for my ride:  another double-Diablo.

Guess what?  I didn’t feel so hot.  Actually, I was miserable from the first pedal stroke and it got worse from there.  I thought about just going home—but I’d feel lousy there, too, so what was the point?  I met up with my friends and clung desperately to the back of the group all the way to the base of Mount Diablo.  Once the climb started, I got dropped so abruptly I didn’t even have a chance to tell them not to bother waiting at the top.  My stomach—a stalwart ally, the linchpin of my cycling ability—was livid to have been so abused.  As the climb dragged on, my system exorcised most of the evil, but my energy stores were empty, closed, all boarded up.

I ended up doing both Diablo assaults alone.  Many times I thought of cutting the ride short.  After all, each climb was optional.  Heck, the whole ride was optional—in fact, the whole sport is optional!  But I didn’t quit, because here was an opportunity to turn this poor dietary choice into a positive.  If I could stave off despair and continue pedaling under such duress, for no good reason, I’d give my psychological mettle a real test in advance of the big race.  The Everest Challenge is grueling, sure, but at least I won’t be riding it on rice flour and fatty pork alone.

After the ride I spent a good while lying on the living room floor.  I slept really well that night.  Once again, I dreamed of food:  I’m at my daughter’s soccer game coveting the snack somebody’s mom brought, which is a large bowl of cooked lentils.  “Could I have some now?” I beg.  “No!” the soccer mom replies.  “You can’t have any now or later!  It’s for the kids!”
Posted by Dana Albert at 8:27 PM