From the Archives - Haircut Gone Wrong

I’ve always lacked a vocabulary for hair styles. When the barber asks what I want, I never know what to say. Directions like “take off an inch” seem meaningless—I have no real sense of how long my average hair shaft is, nor how much they vary. Today at Supercuts I went through the normal struggle before the hair stylist brought out a visual aid: photos of six men, none of whose hair looked anything like mine. They were swarthy men with curly hair and names like “Rado” and “Moose.” I pointed essentially at random and let the hair stylist use her discretion. The haircut came out fine.
That isn’t to say my haircuts have always come out fine. The worst one? Well, right before I moved from Colorado to California in 1987, my buddy Pete offered to cut my hair. He’d never cut hair before, but I gave him a shot. He snipped away for awhile with what seemed like great confidence, but then stepped back, frowned, and said, “Dude, it’s all screwed up. I better buzz it.” So I started my California life with a sub-Sinead buzz-cut. (Adding insult to injury, Pete then had the nerve to nickname me “Curious,” as in “Curious George.”) After that buzz cut finally grew out, I experimented a lot, letting my hair get pretty long at times and having fun with hair gel. During my freewheeling late-‘80s SoCal years, my ‘do often looked something like this: 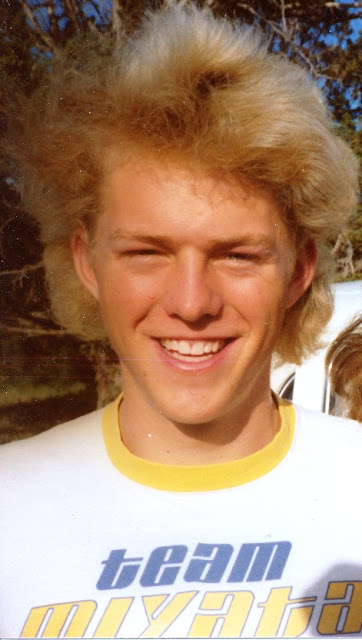 When I moved to the Bay Area in summer of 1990, I wanted to get a high-paying office job so I decided to get a nice short haircut. (With hindsight, I should have gone native and grown my hair even longer, since I ended up with yet another bike shop job anyway.)

Below is the tale of my first Berkeley haircut experience, which didn’t go at all as I’d expected.

The hair stylist I used to go to in Boulder always told me, “Women should not cut hair. They’re too emotional, too unpredictable. They’ll screw up another woman’s hair if they’re jealous of her looks. And when they’re in a bad mood, no customer is safe.” Or something to that effect; I forget exactly what he said or just how he put it. I wasn’t ever sure how much stock to put in this judgment. I once got a haircut from this Italian woman who seemed to have her own ideas about what would look good, and did exactly the opposite of what I asked for. Thing is, it grew out really well and became one of the best haircuts I’ve ever had.

Maybe that’s why I didn’t immediately leave the other day when, during my first week living in Berkeley, I went to get my hair cut at a hair salon on Bancroft Ave and found only female stylists. I was looking for a little trim (I mean a haircut—get your mind out of the gutter!), because it had been awhile since my last haircut, from my brother Geoff, and it was growing out really unevenly. Ordinarily I wouldn’t really care, but I’m trying to get a job right now and if I can’t dress as nicely as the next guy for these interviews I might as well not look too scraggly.

Besides, there’s something so right about having your hair cut as soon as you land in a new place. All the old cowboys always went straight to the barber as soon as they hit a town, right after they’d had a good meal and a drink at the saloon. You’ve seen it in the movies. Of course, if it was a Clint Eastwood western, the hero also wasted no time in shooting half a dozen people and bedding down some fine woman. Well, I’m no Eastwood but at least I can have the old hair evened out a little bit.

So here’s what transpired. I sit down in the barber chair and right off the woman with the scissors is fuming mad about something. “Whaddya want,” she scowls as she spins me around in the chair. I start to tell her but I don’t think she’s listening. Instead, she’s muttering furiously: “Every day it’s that damn radio: first this station, then that, why don’t they just find a station and leave it instead of always switching around, all day long. It’s making me sick.” I almost decide to make a run for the door, but it’s too late, she’s already begun.

I can’t even see the carnage because she has me turned away from the mirror. Usually a barber will keep you facing the mirror so you can watch him or her work, but throughout this haircut the chair faces away. Every time my hair stylist finishes a strafing run of snip‑snip‑ snip‑snip‑snip she exhales briskly, the exhaust phase of her constant seething. I look at the other two women working there, and they seem to be the overly cheerful type that always rankle grumpy women like the one who is attacking my head.

I look at the guy in the next chair, who looks something like a fat Stephen Roche. He’s cheerfully chatting away with the youngish woman cutting his hair and constantly asking technical questions. I’d hate to be in her shoes, because his is the kind of hair that just can’t really be made to look good. I don’t mean to hack on the guy, but his hair is so thick and has such tight little curls that all I can see in its future is that trimmed hedge look—his hair is doomed to be a big cube or melon‑ball unless shaped creatively, like Grace Jones’ anvil‑shaped job or the strange skewed‑plane look sported by rap artists. I met a black guy with such a hairdo at the optometrist’s, and he was getting mismatched contact lenses: one magenta, one green. But that’s another story.

Anyhow, I’m pondering the futility of this other guy’s hair, and the increasingly tragic plight of my own, when one of the bubbly women looks right at me and says, “What’s your name?” I tell her and she says, “Well, Dana, you look angry. Why is that?” The only thing I can think to say is “I just ran over my cat in my parents’ Blazer.” This response has popped into my head, and won’t go away, and I can’t think of any other. I’m tempted to actually utter it, but being bitter or sarcastic with people is no way to conduct yourself in a strange city, even if it’s Berkeley.

So while I’m trying to assemble a nice, safe response to this really stupid question, Jackie the Ripper snorts in my ear, “Don’t even listen to her. Just don’t pay any attention.” Now a new response to the question has rooted in my head: “I’m not angry, I’m just really concerned about the unstable and obviously upset woman cutting my hair.” I can’t really use this response either because I feel like somehow I’ve created a bond with the psycho woman in our mutual dislike for ol’ Mary Lou Retton over there … a bond which I don’t want to disturb because the snip‑snip‑snip sound is now slowing down somewhat, and the terrible nasal fuming sound has gotten a bit quieter.

In time, the breathing in my ear begins to sound pretty normal and the snipping is at a higher pitch, indicating that only the very tips of the scissors are being used. This is a very slow, deliberate cutting now. So slow, in fact, that cutting the back of my hair takes about twice as long as the top and sides combined. An eternity later she’s done, but instead of turning me around to face the mirror she gives me a hand mirror and asks, “How do you like the back?” I am shocked to see a graceful semicircle where the hair ends on my neck. She’s obviously very proud of it. And geometrically, it’s perfect. Aesthetically, I really don’t know what to say. I’ve really never seen anything like it. It’s so short and precise . . . truly bizarre.

Without another word, she takes off my little poncho cape deal and starts putting away her stuff. Paddling with my feet, I sort of walk my chair around to where I can see the mirror, and as soon as my reflection comes into my field of vision, I stop dead. The horror! What’s left of my hair is running down my forehead in miserable little wet strands. I’ve never been one to be obsessed with my appearance, but this is really serious. I feel a strange sort of detachment from the whole thing, like it’s too horrible to really be me. It’s the same sense of withdrawn awe I felt when I once severely cut the knuckle of my ring finger on some glass and could clearly see the full depth of the incision and the massive flap of skin, only a second before spraying blood brought me back to reality.

The haircutting woman must notice the strange look on my face because she hands me a comb and says, “Oh, here. Style it.” How? There’s nothing to style! And my head is so . . . so round! It’s not that every strand is uniformly short; it’s that most of the strands are just plain gone. But the detached feeling continues and I’m oddly calm. I have this inexplicable faith that by the time I’ve paid my eight bucks and gone home, my hair will look different. It’ll be dry then, maybe, and . . . aw, who cares anyhow.

Besides, there are two reasons I should be happy with this haircut. First, like I said earlier, I’m trying to get a job right now, and I’ll bet employers just love dorky, Young‑Republican haircuts. Secondly, this will be a very durable haircut: it’ll be a long, long time before I let anybody with scissors near my hair again.