NOTE:  This post is rated R for a couple instances of mild strong language.

A couple years ago I blogged about new year’s resolutions and the difficulty I had in coming up with them.  That problem perhaps isn’t as common as the main problem these resolutions present:  that is, the difficulty of sticking with them.  In this post I examine this problem and provide my miraculous solution—a one-size-fits-all resolution that anybody can stick to.

The pitfalls of typical resolutions

One problem with so many resolutions is that they emphasize the negative.  Drink less, quit smoking, be more active, eat better, be less stressed—it’s like a laundry list of what’s wrong with you.  It’s no wonder they’re such a downer, even before we fail to achieve them.  What’s less obvious is the myopia of only trying to change only what we already know is wrong.  If we think of our overall life performance the way we’d look at our investment portfolio, we realize that looking only at known bad behaviors is like only watching the stocks we own, without asking a bigger question, “How much am I losing by not seeking out new investments?”  In other words, what opportunities may be lost when we focus only on our current failings?  Couldn’t failure of imagination be a much bigger problem than failing to curb bad habits?

Another problem with new year’s resolutions is that they’re too goal-oriented.  We’re always told that we should set specific, tangible, measurable goals.  I don’t agree.  I could go on about this, but I’ll save that discussion for its own post.  Suffice to say, the problem with really specific goals is that it’s too easy to fall short, and then we just give up.

Here’s an example.  I was at a San Francisco restaurant with a colleague last week.  While waiting a good while for another colleague to show up, we stared down a large drinking glass full of crispy bread sticks.  I wasn’t inclined to eat any—they’re utterly pointless, with a glycemic index of roughly infinity, and the butter you dip them in goes straight to your arteries.  But I started in, if for no other reason than to use up the butter so as to help my colleague, whom I assumed was struggling to resist the unhealthy snack.  (He’s good at sports but knows he’d be better if he lost ten or fifteen pounds.)  Our wait dragged on and soon I’d eaten enough breadsticks to consume most of the ramekin of butter, and I was feeling a bit disgusted with myself.  Suddenly, my colleague grabbed a breadstick and dug in.  “Oh, man, sorry I ate most of the butter,” I said.  “I thought you didn’t want any.”  He replied, “Oh, no, I didn’t, I was trying to skip it, but then I decided … fuck it.”  That one particularly evocative word, “fuck,” was the telltale sound of his resolve snapping like a breadstick.

When we make specific, measurable new year’s resolutions, our behavior becomes a binary condition of being on or off the wagon (to borrow a conceit from Alcoholics Anonymous).  We measure ourselves against whether we’re adhering to our goal, and the minute we’re not, we become fatalistic and decide all is lost.  You know:  “fuck it”—and the effort is abandoned.  (Of course we shouldn’t take this attitude; in equating a behavior change with the realities of substance addiction we commit the logical fallacy of false analogy.)

The problem of time

Resolve isn’t the only obstacle to keeping new year’s resolutions.  There’s also the problem of time.  So often, the resolution is to do something you haven’t been—which means finding the time for something that’s never been part of your routine.  Or it means changing behaviors that, whatever their failings may be, are at least convenient or efficient.  I looked at lists of top-ten new year’s resolutions and found seven that involve time.  Get fit, learn something new, spend more time with family, volunteer:  all these are the kinds of things we hope to get to, eventually (i.e., will never get to).  Eat healthier, drink less, be less stressed:  these also take time, in their way.  Healthy food like salads and vegetables take time to prepare.  Drinking is a really quick way for millions of people to relax, and takes far less time than yoga or meditation.  Stress, meanwhile, is so often caused by not having enough time to accomplish everything.

When other people are counting on you, their deadlines feel very real.  Your pet self-improvement project, which nobody else is monitoring, is an easy target for postponement.  And yet, people do manage to get fit, to volunteer, to learn things, and to spend time with their families.  What’s their secret?  Well, I think part of the problem is that we do have the time for these things, but not always when we’re in a position to do them.  I feel like exercising, but it’s dark and/or raining and/or cold outside.  I’d like to do something with my family, but they’re already doing something.  I’d like to read my book, but it’s at home.  So we spend countless hours filling in the time—browsing the web, checking Facebook, watching TV, etc.  It’s not moving us in a useful direction, and it’s not particularly satisfying.

So you want to know the solution to all this?  Are you ready?  Here it is:

This year, I resolve to spend more time doing things I would like to be better at.

This isn’t going to solve all our problems—we might still drink too much, weigh too much, and/or be too sedentary—but it’s a legitimate resolution that, if followed, will give us small bursts of satisfaction throughout the year.  And look at all the pitfalls it avoids:

This isn’t to say that this resolution rules out wasting time.  The young, especially, should defend their right to waste time as they see fit—if “waste time” can mean both “accomplishing nothing of importance” and “doing something I’d like to be better at.”  When my brother Max was a young teen, he decided he was going to teach himself how to do a track stand—that is, to be able to balance in one place on a bicycle indefinitely.  It’s not easy to do.  (Of my bike club, fewer than two-thirds of the guys can do a track stand; only eight of us can do a no-handed track stand; and only two—Max and I—can do a downhill track stand.)  Max spent countless hours learning this, wearing out tires and making strange crescent-shaped black marks on the driveway.  Look, decades later he’s still got it: 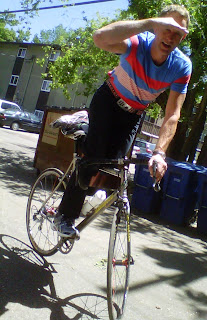 As he developed his skill, he inspired my brothers and me as well, and taught us the ropes.  Track-standing is a pretty pointless skill, but in the process of learning and refining it we unknowingly knocked off a few classic new year’s resolution favorites:  learning something new, spending more time with family, and getting fit (at least, in terms of balance). 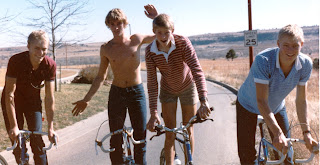 You never know how these random fancies will play out.  Many years ago I read an article in “The New Yorker” about the downhill skier Bode Miller.  His unconventional style and methods, the article explains, paid dividends when the new style of shorter, carving skis came out:

For athletes steeped in classic technique, [the new skis] took some getting used to.  Miller, though, had never stopped experimenting.  He was used to leaning back on his skis, he had great footwork thanks to tennis and soccer, and his sense of balance improved year after year.  While other skiers sat on exercise bikes, he learned to ride a unicycle.  While they bulked up with weights, he stretched a rope between two trees in his back yard, and practiced tightrope walking.  Two summers ago, Miller spent six weeks logrolling in Wisconsin.  His girlfriend at the time, Lizzie Hoeschler, has been logrolling since childhood and is ranked fourth in the world in the sport.  “It’s very hard to learn as an adult,” she told me.  “It’s just weird to stand on a log that is floating in the water.  But Bode was rolling before too long.”

I don’t get the sense that Miller had a specific goal in mind when learning to logroll, and wasn’t doing it with an eye to improving his skiing.  He was doing it simply because he enjoyed the challenge.

Does this mean than we should all have free reign to spend as much time as we want at any old thing?  Can we, say, play all the video games as we want?  I suppose I should qualify my resolution a bit more:  we should spend time doing things that, ten or twenty years from now, we’ll still be glad we bothered to get good at.  I’m glad I learned how to track-stand as a kid, because I sure wouldn’t make time to learn it now.  As a teen I did spend a fair amount of time playing video games, and I’m less excited now about the time I spent on that.  But I don’t regret it, either, for a couple of reasons.  One, at least I had to ride my bike across town to the arcade and vie for the game machines with other teens; and two, I recognized the point at which gaming had become a habit, as opposed to something I truly wished to be better at.  Over time the awe I had watching the master gamers turned into something more like pity for the countless hours of fanatical devotion they dedicated to it.  So I gave it up.

Creator, vs. consumer, of entertainment

Another way to look at this is whether, in spending your free time, you are a creator of your own entertainment, or just a consumer of ready-made diversions thought up by someone else.  Doing a crossword puzzle is an example of the latter.  I don’t have anything against crosswords; they’re decent mental exercise, and I can see why somebody would like to get better at them—to a point.  But ultimately, there is exactly one solution to the puzzle, so you’re replicating a standard activity.  (I put reading—that is, of good literature—above this, because every reader brings a different experience to the act of reading, and envisions the characters and scenes according to his own imagination.)

Here’s a cool example of creating entertainment even as you consume it.  My nephew John, in his last summer before going to college, decided to get really good at disc golf.  That’s a fine activity by itself, to my mind.  (Though not as intense as my cycling or John’s baseball, it’s pleasant enough recreation.)  But he and his pals decided to take it up a notch and put their own target basket in various hard-to-reach places, and film themselves making amazing shots.  They put together a pretty incredible YouTube video, “Disc Golf Aces and Trick Shots” (click here to watch it!).  Thus they joined creativity to disc golf mastery, spending countless hours on a project as glorious as it was pointless.  Perhaps decades from now they’ll watch that video again and be glad they made time for such frolics when they had the chance. 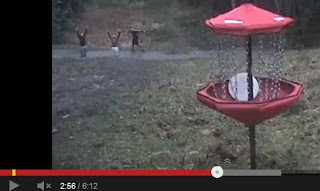 My resolutions this year

Okay, enough about athletes and teens.  What about some more practical activities, for busy adults?  Like, what is your blogger hoping to spend more time getting better at in 2013?  This year, it’s running (which I still can’t do very well after breaking my leg in late 2011; last year it was relearning how to walk).  I’ll still make time for cycling, having fun, reading great books, and keeping up this blog.  So I’ve got my work cut out for me, and I hope you do too.