From the Archives - the Panache of Italian Bicycles

I have a new road bike. The frame is from Taiwan. This is a first for me (other than my rain/backup bike, which doesn’t count). I’ve been told, and I believe, that the Taiwanese are now the best in the world at making carbon fiber bike frames. Taiwan has come a long way … not so long ago, I wouldn’t have even settled for a Taiwanese mountain bike. 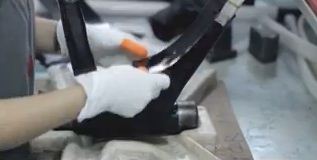 Caring where my bike came from goes back to my very first one, a Fuji I got for my ninth birthday. I loved the bike but my brothers teased me constantly about how, being Japanese, it lacked the flair and panache of their French bikes. (For details click here.) My next bike was also Japanese, a Miyata, because my parents were still buying. But at the young age of thirteen I borrowed some money from my dad and bought an English Mercian frame with all Italian components. I was absolutely besotted with it, and then tragedy struck: I crashed it into a curb and ruined it. I was still paying it off years after this. Worse, my dad wouldn’t loan me any more money, so to replace the frame I had to borrow from my brother Geoff. Oddly, Geoff would only loan me the money if I bought a Pro Miyata. So I did. Going back down to a robot-built Japanese frame really chafed, after that gorgeous hand-built Mercian. Perhaps that experience predisposed me to take extra pleasure in my first Italian bike frame, a hand-built Guerciotti, which inspired the following essay.

(A quick note on this essay: it suffers from a lack of clarity about what is real and what is made-up. Though I can’t prove this, the old Campagnolo slogan is real; perhaps some of you will remember it.)

I don’t claim to fully understand what’s going on in Kuwait right now, but I gather Iraq is getting too big for its britches. But you know who else is getting too big for its britches, at least economically? Japan. Back in the early- to mid-‘80s, the yen was really weak against our dollar, which mattered to me because it meant bike stuff was really pretty cheap. (The Italians had to lower their prices to compete, I think.) In 1985, simply because I was jaded after years of devotion to Campagnolo and could afford to, I bought a full Dura-Ace gruppo. I mean, why not, when it was only $400 mail-order? Of course, in those days, Japanese bike stuff was always considered second-rate, the bargain alternative to Italian. But now Dura-Ace is considered as good as Campy, and Japanese bikes are everywhere, even at the high end, and everything is expensive. There are no more good deals in cycling. So, after five years of Team Miyatas, I’m going back to Italian. I might as well.

The best thing about Italian frames is that they’re the only ones left that sport a large ornamental hole cut in the bottom bracket shell. Sure, the hole may jeopardize the structural integrity of the frameset, but can you say style? And check out this quote from “Bicycling” magazine:

We could detect no structural improvement in the “cut” frame; in fact, this model flexed between .5 and .6 microns more than other frames under a load of 150,000 foot‑pounds on our Tarantula frame-stressing machine. However, our test riders all agreed that the “cut” frame “just felt faster.” Time trial times were typically 5 to 10 seconds faster over a 20 kilometer course. 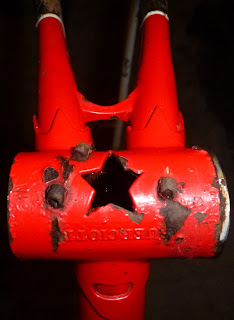 The tradition-bound, mystique-rich flair of the Italian bike industry is widely respected. Consider the reverent tone of this excerpt from an article in “Bicycle Guide” about Petruccio Cycles, a tiny operation in Milan:

Everything about the shop is typically Italian. A half-full bottle of Cinzano and some bread sticks lie on the front table. A faded black-and-white poster of Alfredo Binda hangs on the cracking plaster wall, and an old grey cat (whose name we found out is, of course, Fellini) sleeps in a patch of sunlight. The frame jigs and mitering tools are old, black, and in fact barely visible under the single dangling bulb lighting the shop area. But there is one thing completely unique about this one‑man operation: the master framebuilder Giuseppe Petruccio is blind.

Even the marketing is beautifully absurd; take this actual slogan, for example: “Campagnolo Technology to Love Bicycle. Even Only on Sundays.” What does that mean? But then who really cares? A Clément tire ad features a woman, whose appearance falls halfway between Italian allure and brazen smuttiness, engaged in a tug‑of‑war over a tire with her male equivalent; oddly, her expression is blank. A well-dressed gentleman in the background looks on. It’s as though the struggle over the tire continues only because of inertia; everybody involved has mostly lost interest. 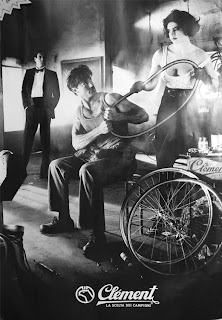 The point is, you’re not supposed to choose Italian products based on features and technology and other rational criteria. It’s more of a feeling, man. So you can do one of two things: you can be a fitness-minded sport tourist who studies product catalog spec sheets to decide what Japanese robot-built, shrink-wrapped component or accessory to buy for his peacock-pastel colored bicycle, or you can be Euro and ride a classy bike built by a starving-artist type who, thirty years ago, inadvertently settled on a frame design that seemed to work so he’s passed it on to his apprentice, or his cousin, or any of his bambinos who needed a job. The choice is yours.
Posted by Dana Albert at 9:16 PM