From the Archives - Sitting Out Super Bowl XXIII

About this time of year it dawns on me that the Super Bowl is coming up. Often I’m ignorant of who is even playing; I haven’t been invited to a Super Bowl party since the mid-‘90s. But this year my brother Bryan, who lives near Seattle, offered his condolences for “his” Seahawks beating “my” 49ers in the, uh, NFC conference championship game, I think it was. I didn’t know what to say, because at first I didn’t know what he was talking about.

Anyway, I have to confess I’m glad the 49ers didn’t make it to the Super Bowl, because the last time San Francisco won a championship of that magnitude (the 2012 World Series), there was rioting in the streets and some dumbasses celebrated by torching a city bus. Whatever pride I might feel in a sports team affiliated with my geographical area is completely eclipsed by such shameful acts.

In honor of this week’s big game, I invite you to read this piece from my archives, about being a UC Santa Barbara student caught up in the fanfare of Super Bowl XXIII. 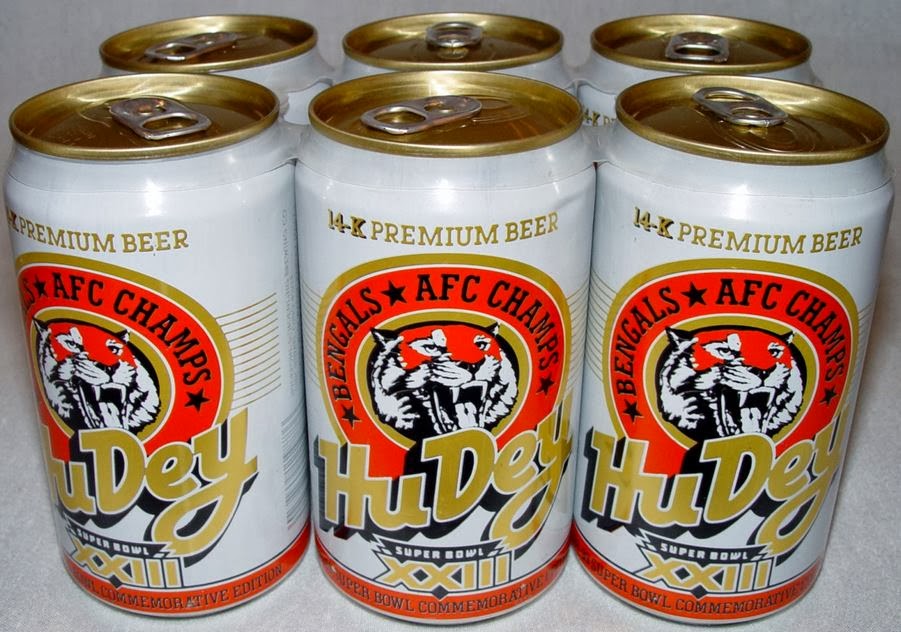 Guess what I didn’t do yesterday? Believe it or not, I didn’t watch the Super Bowl. Instead I studied for a test and wrote a paper. Perhaps what’s more surprising is that even if duty hadn’t called, I think I could have found something better to do than to watch two football teams throw the old pigskin around amid incredible hype.

“What’s that? You blasphemous pinko commie scumbag! Hey, pal, if you don’t like America, you can just leave!” That’s what at least some of you are probably thinking. Let me qualify my statement by saying that this isn’t a matter of principle. I have nothing explicitly against football or the Super Bowl. If I were bored out of my mind in a stranger’s home with no books around, no homework to do, and no cats to play with, I would probably turn on the TV and watch the game. What’s more, I would probably enjoy watching it to a certain degree.

I’ve been known to occasionally get excited about football; after all, my brother Bryan and I [back when we lived in Colorado] did exchange dual‑in‑the‑air‑high‑fives when the Denver Broncos made “the drive” to win the AFC Championship game a couple years back. (Some of our enthusiasm was about the dual-in-the-air-high-fives themselves, and our finally having an excuse to do them.) But I’ve never watched the San Francisco 49ers play, nor the Cincinnati Bengals. I suppose I could feel an affinity for the 49ers since they’re from California, but they’re not, really. I mean, they aren’t local boys or anything; the NFL draft makes sure that players don’t get to choose where they play. So why should I feel a tribal bond with any team at all?

Moreover, since I almost never watch football to begin with, why should that suddenly change just because this is the biggest game of the year? I know, I know … the pageantry, the spectacle, blah blah blah. I must admit, there’s a certain novelty to everything getting blown completely out of proportion, but that wears off pretty fast.


For a solid week before The Game, the newspaper covered every aspect of this sporting event, which was presented as being glorious even before the fact. The media even gave non-game-related news a game-related spin; for example, an outbreak of racial violence in Miami was reported in terms of how it could affect the Super Bowl. (They even mentioned later that the rioting stopped right at kickoff.) I found out what Joe Montana ate for breakfast the day before leaving for Miami. Dr. Ruth Westheimer predicted that the Bengals would lose because they were forced to stay in different hotels from their wives.

The published schedule for the game took up more than a few pages in the newspaper: the first pre‑game special would start at about 10:00 a.m., and various programs about The Game would run until the first kickoff at 2:30 p.m. Then, the supposedly hour‑long game was scheduled to run clean through the 5:00 news, and would eventually dominate the entire day’s programming.

Notwithstanding the fact that the 49ers’ home is hundreds of miles from Isla Vista, several local businesses took advantage of everybody’s enthusiasm (i.e., the Super Bowl’s ability to create wealth). Dave’s Market issued a special Super Bowl coupon book, and car dealerships had sales commemorating the event. But perhaps more incredible was the hype about the advertising that would run during The Game. I have never seen advertisements for advertisements before. In the L.A. Times, AT&T had a full‑page ad for their halftime commercial. Coca‑Cola had a promotion in stores everywhere: you could get a free pair of 3‑D glasses with the purchase of a six‑pack, for watching the 3‑D Coke commercial during the game. For the cost of one 30‑second spot at halftime, a company could sponsor a three‑week bicycle race!

Perhaps the most astonishing thing about the Super Bowl is the crazed following it has around here (that is, among those who ought to be all glum about our local Los Angeles Raiders missing out). An hour before the game even started, people in apartments all across town were leaning out of windows and yelling, “Yeah, 49ers!” Twenty minutes before kickoff, what passes for our downtown was a zoo of people rushing around, getting one more six‑pack of beer, one more bag of pretzels, or visiting one more apartment to share Super Bowl vows, prayers, or bets. But twenty minutes after kickoff, it was a ghost town. You’d swear a plague had hit the streets.

Even after I buried my nose in a book, I knew exactly what it was people were seeing on their TVs. With every cheer I heard from the adjacent apartment, I knew another player had trotted onto the field. Ooh, there’s an extra loud cheer—must be Joe Montana! Great job, Joe, you made it out of the locker room! Then, the din died down during the inevitable ten‑minute commercial break, except for the occasional random “Yeah 49ers!” coming from an apartment window. And then when the game finally got going, whooping and yelling would burst forth from all around my apartment, so often that I often thought the score must be well into the three digits for San Francisco.

A new twist on these old traditions was the screaming and yelling of girls. Yes, actual girls watching football. You can call me a chauvinist, but I simply refuse to believe that any female could actually enjoy watching football. I mean, it’s a very masculine game. The standard football fan is supposed to be fat man wearing a filthy white tank‑top, slouching in his overstuffed armchair with a beer resting on his belly, with all kinds of snack foods and a nagging wife nearby. Having somebody to ignore is part of the pleasure for these men, or at least used to be.

But I guess these women call themselves “liberated.” By being “liberated”, they’re subjecting themselves to a game they loathe, pretending to enjoy it, so that their boyfriends will respect them. “Yeah, my woman loves football! She even knows the rules!” they can brag to their friends. You may wonder, why do I even care? Well, it’s just that the female contingent adds an annoying new aspect to the game: shrieking. My ears were ringing with every big play.

I can well remember when the Denver Broncos were in the Super Bowl for the first time. This was back in the late ‘70s. Our Boulder fans were pretty rabid. My elementary school practically declared a holiday the Friday before. Instead of the normal lessons, we did Broncos-themed activities all day long. For example, we all gathered for a sing-along with songs apparently written specifically for this game. I only remember one chorus: “Ya gotta …. make those miracles happen!” There was also a crossword puzzle; one clue was “What the Cowboys’ offense will be after the Broncos get through with them,” and the answer was “CRUSHED.” That was based on the nickname for the Broncos’ defense: “Orange Crush.” There was a product tie-in with the artificially flavored, artificially colored orange soft drink. I wasn’t a very sophisticated kid, but still, I was pretty disgusted by the opportunism involved and how successful it was, with giant pyramids of extra Orange Crush throughout the grocery stores. 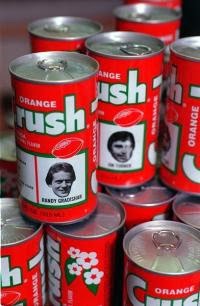 I finally got so sick of all the Broncos mania, I (very stupidly) lashed out at everybody and said, “I hate the Broncos! I hope they lose!” This utterly ruined me socially. I was a pariah from that day forward. Sometimes I think my social life still hasn’t recovered.

But the crazy thing was, during that Super Bowl, the Coloradans were fairly mild-mannered; I didn’t hear a peep from the neighbors. (Perhaps this was because the Broncos got completely slaughtered.) But this past Sunday, among the UC Santa Barbara student community, the yelling was over the top. Was it my sour imagination, or did the cheering seem fake and forced out here? It almost seemed like a competition between people to see who could yell the loudest and most often. An extra creative cheer could win bonus points: “Yeah 49er’s baby whooooh!”

Of course I’ve cheered at bike races and swim meets, but that was to spur on friends whose progress I had been watching for years, and who were actually teammates of mine. They could hear me cheering and would know my voice. As loud as the fans were here, I hardly think the 49ers could hear them all the way in Miami.

One thing that really didn’t amuse me about this Super Bowl was the big news of the player who broke his leg in two places. He refused to leave the field for hospitalization because he wanted to “be there” for his team. Naturally, his stupidity was applauded by the spectators. I guess none of them realize that when that player is condemned to a wheelchair, the game won’t seem that important anymore. Fortunately, the team doctor finally made him go to the hospital. (There’s probably a lawsuit pending on that one now, with the player claiming the doctor damaged his career.)

So. Do you think we can expect that kind of enthusiasm during this year’s bicycle racing season?
Posted by Dana Albert at 10:18 PM