I usually only race once a year (the two-day Everest Challenge stage race) but every so often I do the Mount San Bruno Hill Climb on January 1.  My bike club has a tradition of e-mailing race reports, which are usually (and ideally) short on race details and long on food details.

What follows is my report to the club:  first the short version (another welcome convention), then the medium version.  As an albertnet exclusive, I offer also offer here the full version with more details and commentary.  Note that I did not win this race and wasn’t  at the finish in time to contest it.  If you’re hoping to find out who won this race and how, you’ll need to look elsewhere … I can’t concern myself with such things. 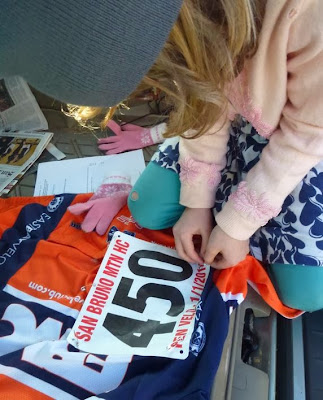 I came, I rode, I sucked. Almost a minute and a half slower than last time. Minimal caloric indulgences. No catastrophic mechanical failures.

Despite wisely eschewing breakfast, I wasn’t moved to splurge on a big brunch after the race, and drowned my sorrows with Erin’s hastily patched-together hot cocoa (one part Sharffen Berger dry cocoa—the dregs of the can—with some other part Trader Joe’s unsweetened dry cocoa, some parts milk, and not-enough parts sugar, the result of which tasted very sophisticated in that fascist killjoy pissing-contest “if only we could make this stuff whole-grain!” mode that afflicts so many modern chocolate companies who would like to be called “chocolatiers” but I refuse to take the bait). When we got home I made my locally famous non-fair-trade linguine alla vongole, using non-organic boxed pasta and clams from a can, okay?

Self-assessment: “PASS” in the race (only because I managed not to crash), and B+ on the pasta. Erin gets an A on the cocoa because a) it was too good for me, b) the kids liked it enough to fight over it, and c) she made it to begin with while I was pursuing my own selfish race-preparation centers.

The Mount San Bruno Hill Climb is perhaps unique among bike races in that it can produce a feeling of self-loathing even before it starts.  Because it’s held the morning of January 1, by signing up you’re generally acknowledging that you haven’t been invited to any great New Year’s Eve parties.  You are admitting to yourself and others, “I have no life … I might as well race.”

Not that there aren’t guys who both party and race, as I described in these pages four years ago.  But I’m a family man, and need to lead by example.  Getting completely crushed in a bike race because I’m hung over isn’t something I’d want my children to witness, and for some reason my family likes to come to this race with me.  Sure, I could get crushed and not chalk it up to a hangover, but I confess I’d rather not have my kids see me get crushed at all.  (When Alexa was about three, she watched me lose to a friend of mine in one of those Cyberbike computerized-trainer races.  She burst out crying and said, “Daddy, you always lose!”)

I was in bed by around 10 p.m. on New Year’s Eve, while my kids stayed up past midnight.  For breakfast, they had some complicated meal that delayed our departure and thus shortened my warm-up.  I don’t know what they ate because I steered clear:  they were grumpy from sleep deprivation, and I was grumpy due to road rash, particularly the road rash on my fingers that meant I had to wipe left-handed.  Not to go too far into that, but I was doing a lot of wiping.

For breakfast I had nothing.  San Bruno is a short race.

During the drive Lindsay asked an astute question:  “Daddy, since you’re not even quite forty-five, is it fair that you’ll be racing against guys who are mostly older, even some fifty-five-year-olds?”  I took this as a diplomatic version of, “Isn’t your only hope of glory the pure accident of the arbitrary age cutoffs of the Masters racing environment?”  To punish her for her scalpel-like dissection of my frail ego, I bored her (and her sister, and my wife) with a lament about a new rule that the NCNCA seems prepared to enforce this year:  one-day license holders cannot race in the category they’d earned membership in as annual license-holders, but must race with the newbies in the Cat 5 ranks.  On the face of it, for a crusty old veteran like me to race against these guys would be like taking candy from a baby.  A more nuanced examination would show that I’m actually afraid of these newbies:  some of them are young and strong, and this race is straight uphill, so that baby might just take his candy back and half my arm with it.  I convinced the race promoters to let me race with the Masters 45+ 4/5s.

Parking for San Bruno is in the giant parking lot of a research park.  The spacious front parking lot was completely full so we had to go around back.  Everywhere, thin old dudes were warming up briskly on their trainers.  I found my fellow cyclists’ enthusiasm for this event highly annoying.

Of course I recognize that it’s a bit silly to find a behavior annoying that I freely engage in myself.  After all, I love cycling, and have a deep respect for those who fight off the ageing process (and the belly fat that so often comes with it), and who manage to maintain their discipline in this very difficult sport.  I have two answers to this critique.  First, I refer you to my “self-loathing” comment above—there’s actually no hypocrisy in disliking others on the same basis that I dislike myself.  Second, it isn’t the behavior itself—i.e., showing up to a bike race on January 1—that bothers me.  What bothers me is their intent to beat me, and their probability of succeeding.

Let me make an analogy.  I can’t fault a man for wanting to hit on my wife.  After all, that’s just a sign of good taste, and even shows a strange kind of kinship with me.  (Heck, when I first met her I hit on her myself, so how could I fault them?)  Some men would want to punish this behavior, perhaps on the basis of it being an assault on the institution of marriage, but more probably on pure impulse.  Not I.  I was once late meeting my wife at a restaurant for dinner and found her waiting at the bar, where a guy was eagerly chatting her up, laying on the charm extra thick.  I merely chuckled.  After all, I could afford to, because my wife evidently has a fetish for stick-thin would-be poets who like to eat fast, and this guy didn’t meet those criteria.  But suppose he’d been getting somewhere?  At that point the joke would wear thin.  So it is with those bike-racing loser/winners who show up in droves just to rob me of whatever minor glory I could hope to earn here. 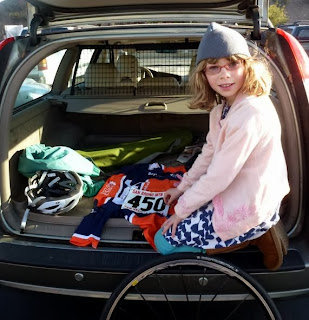 As I set up my trainer, I heard somebody call my name, and it didn’t sound like my teammate Ken Cluff (the only guy I knew who had mentioned doing this race).  Turns out I’d parked right next to my old UC Santa Barbara teammate Mike Baldwin, whom I haven’t seen on a bike since 1991!  Below is a staged photo of our reunion.  There had been an actual hug, but Alexa failed to snap a picture, and rather than combing the Internet later for the inevitable chance photo of it (since every human action is now thus documented), we staged a second photo. 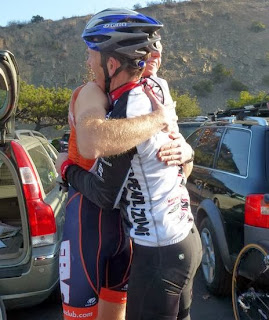 At the start line was the reigning Masters national road champion in his stars-and-stripes jersey.  He was wearing a sunglasses version of the Google Glass.  I’m not going to offer up any perspective on this technology because opinions on this are already starkly polarized, and you don’t need my influence to decide where you stand.  That said, I was unsurprised to see this because, given the profile of your typical Masters cyclist, such an intersection of the tech and sporting worlds was completely inevitable.

Here are Mike, Ken, and I on the start line.  The weather was as fantastic as it looks. 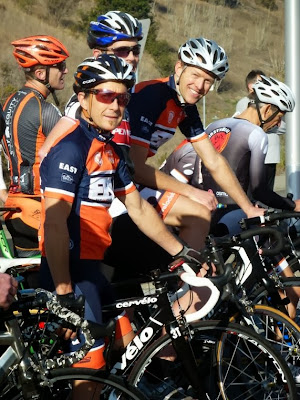 Based on this rookie move, you might think I really do belong in the Cat 5s.  But in adherence with the peculiar logic of modern racing, I’d actually have fared even worse—that is, 16th place—in that so-called beginner category.  In fact, the winner of the Cat 5s was just a tenth of a second off of the time of the Pro/1/2 winner, and would have won any other category.  (Click here for full results.)

Before the race, I had reflected optimistically that, as angry as I’ve been lately (for various uninteresting reasons), I could channel that anger during the race and do really well.  But as I got dropped, I discovered that it’s possible to be bitter without being angry.  In fact, I just felt sad.  I felt  all the hope draining out of my system, perhaps pushed out by lactic acid.

During this crux moment, a cannier racer might have looked on the bright side:  it appeared that only about fifteen riders had pulled away.  Since the Masters 45+ 1/2/3 riders were mixed in with the Masters 45+ 4/5 riders, I could have naturally assumed that not all the riders ahead of me were in my category.  Say it was split 50/50:  I’d have been assured of a top ten result!  Best case scenario, assume ten of them were 1/2/3s:  great, I would be sixth in the 4/5s!  Even if ten of them were 4/5s, I could later say “I’d have been sixth in the 1/2/3s!”  Plus there was the possibility that some of them would blow up and I’d pass them.  But none of this crossed my mind.  All I could think of was that fifteen guys had just made off with my wife.

Ken was way, way ahead of me, but Mike was on my wheel and as he came by to take a pull, I thought, hey, at least I have somebody to work with!  But that didn’t work out either and for most of the race I was out in the wind alone, hating everything and everyone but mostly just the sport of bicycle racing.  To succeed, I really need a triathlon of cycling, speed-eating, and speed-sonnet-writing.

A bunch of riders ride me off their wheels
So now I have to fight the wind alone.
I hope you know how miserable it feels
To ride as though your ass were made of stone.
To think I dropped like forty bucks for this!
I guess my kids are right:  I’m kind of dim.
I almost wish I had to take a piss:
I’d stop, and satisfy this simple whim.
But no, I must continue with this toil
Despite no satisfaction in the cards.
My mediocrity leaps forth to foil
The myth that I can thrive by working hard.
I’d love to tell myself it’s just bad luck,
But in the end I know I simply suck.

I wrote that sonnet in 6 minutes 57 seconds, and at Burrito Worlds I ate the Freebird’s monster burrito in 49 seconds, and I once ate a plate of Gondolier pasta in just under 20 seconds.  If I could find a riding/writing/eating triathlon, well, then we’d see who’s boss!  Until then, come out for a training ride with me ... I could really use it.
--~--~--~--~--~--~--~---~--For a complete index of albertnet posts, click here.
Posted by Dana Albert at 9:10 PM