Earlier this month, my family took a vacation to Kauai.  (There, I typed “Kauai” without misspelling it.  That word, and all Hawaiian words, often trip me up, as “Hawaiian” did just now, and it’s a good thing—perhaps—that  my word processing program instantly flagged the error.)

Where was I?  Oh, right, Hawaii.  I can’t blog about how great a time I had there, because nobody wants to hear about it.  But I also can’t complain about anything, because any complaint that starts out “When I was in Hawaii” isn’t going to generate any sympathy.  And yet, this having been a terribly expensive vacation, I feel like I should somehow get some good blogging mileage out of it (as I have done with an overpriced museum visit and a pricey pair of cycling shoes).  So in this post I’m going to examine the strange sense I got that nobody in Hawaii can spell. 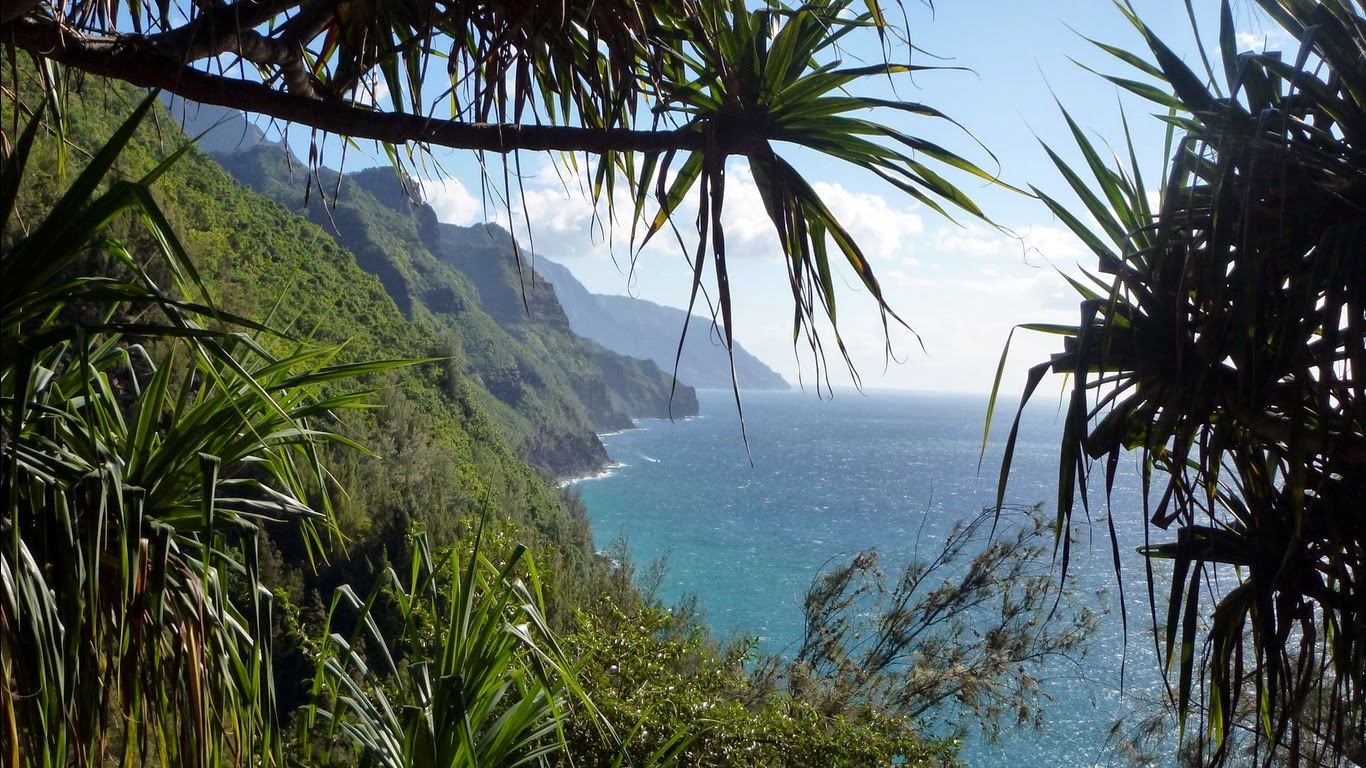 My family is a foodie bunch.  (Can “foodie” be an adjective?  It can now!)  So perhaps it’s not surprising that the first misspellings we spotted were food-related.  The very first was a section on a menu called “Desert.”  I cut people slack when they (incorrectly) write “just desserts” because when the word “desert” is used as a noun but (correctly) pronounced like “dessert,” to indicate “something that is deserved,” we’re into some pretty arcane English-major territory.  But when a restaurant misses that second “s” in “dessert,” you hope they’re better at hygiene than spelling.  Still, we’d have brushed it off had not another restaurant, a day or two later, made the same error.

Later on, we saw “TACO’S” on the banner for a taqueria called Da Crack, and I decided this wasn’t a deliberate error (along the lines of “da” for “the”) but just an uneducated approach to spelling that treats apostrophes like garnish.  (Too bad Da Crack didn’t have any really good garnish, like cilantro.)

In the case of ethnic food, particularly Asian food, I’m very quick to forgive misspellings, and often count them as a sign of authenticity (along with their cousins, the weird word choices you see like “Fire Burst Stomach Trips” or “Eight Precious Rice Pudding”).  And sometimes Asian restaurant misspellings can be really funny, like “Braised pork in spicy Human sauce.”

I’m less understanding when it comes to Western misspellings, like we found in our condo.  The hosts had left a handy list of restaurant recommendations, and it had some pretty blatant errors.  For example, a burger place was touted as “a much healthier choose than McDonald’s.”  The name of this burger place?  “Bubba’s Buger.”  This led to lots of corollary jokes (especially popular with my daughters) such as, “Anybody feel like eating boogers tonight?”  But the funniest misspelling on this list was a recommendation for a health food restaurant where we should “order the Acai bowel, full of antioxidants and pure energy.”

Perhaps you’ve stayed in a bed & breakfast or inn where there’s a nicely bound little journal in which guests can record their feelings about the place.  This journal doesn’t function like Yelp, since you’ve already paid for and occupied the place, so most guests just gush about how great a time they had and how wonderful everything is.  So there’s a lot of gloating, and perhaps some one-upmanship as well (i.e., attempts to be more thoughtful or articulate than the last guy).

Almost every entry in the little book at our Princeville condo had misspellings.  Here is a partial list, courtesy of my older daughter who read them out to me as she went along:


What I found particularly strange about all this is that the people writing in the guidebook didn’t seem slapdash about it; their handwriting was neat and their sentences well-crafted.  None of the entries looked to have been penned by a sloppy t(w)een  (other than that of my own daughter); and there weren’t any LOLs or FWIWs or GR8s or other signs of Gen-Y shorthand.  And yet it costs big bucks to stay in this “cando,” so it’s not like these were uneducated people.  I was, and am, deeply perplexed.

By the way, here is my own condo journal entry, which you can scrutinize for misspellings and/or one-upmanship: Why so much misspelling?

I suppose it would be very imperialist of me, almost Manifest-Destiny-ish you might say, to judge Hawaiians’ spelling of English words when their native language is so very, very different.  Throughout our vacation I struggled to pronounce the native Hawaiian words that frequently popped up as place names and other proper nouns.  I fared far worse than our GPS narrator when saying, for example, “Ala Kalanikaumaka Street” (though we noticed that the GPS Lady pronounced it a little differently each time).  And yet this is actually pretty straightforward compared to words like “pu’uwai”  and “ku’uipo,” with their surplus of vowels and weirdly placed apostrophes. 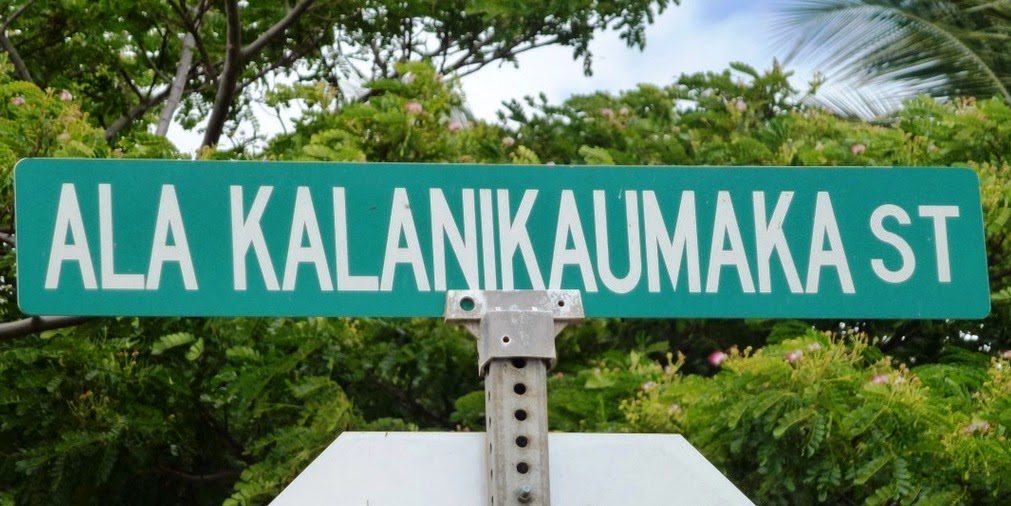 Still, I can’t explain away the English misspellings based on the oddities of Hawaiian spelling.  After all, plenty of people are able to master two entirely different alphabets; as a high school student I was pretty good at spelling Russian words correctly.

Could poor spelling be related to the blissful, carefree apathy that comes from drifting your life away in an island paradise?  Well, it is the case that the lovely Anini Beach had been called “Wanini Beach” until the “W” fell off the sign, and rather than fix the sign, the Hawaiians just shrugged their shoulders and let “Anini” become the new name.

But, as you’ve already noticed, these theories don’t explain why visitors to Kauai, like those writing in the condo journal, can’t spell.  It’s not like something comes over us in the week or two we spend here.   Even my daughter’s journal entry had only one typo—a missing apostrophe—which is exactly the kind of sloppy mistake she makes at home.

And those comical misspellings in the list of restaurant recommendations provided by the condo owners?  Well, the owners don’t actually live in Hawaii.  This is their just guest home.  If memory serves, they live in Texas.

And so, after much reflection, I’ve decided that the misspellings have little to do with Hawaii, and mostly to do with technology—and the lack of it.

Perhaps the most noteworthy thing about the journal in the condo is that it’s the rare example of non-typed text.  Think about this for a second:  how often do you read something handwritten?  The non-typed text I come across generally falls into one of two categories:  1) graffiti, and 2) my kids’ schoolwork.  Do I see misspellings in these kinds of text?

Why, yes.  Perhaps the only words I see among graffiti that are consistently spelled right are the profanities.  Everything else reflects the fecal-mindedness of the graffitist.  Meanwhile, my twelve-year-old isn’t bad at spelling, but my younger daughter, age ten, still has much room to improve.  A sonnet she wrote recently— which  had very good meter and perfect rhyme, and which was very deep, being a letter to her future teenage self, bagging on herself in advance and promoting nostalgia for a time when she wasn’t “blotet [sic] and lazy”—contained no fewer than twenty-three spelling errors.

Aside from graffiti and kids’ stuff, virtually everything I read is typed, and our modern means of typing have all kinds of built-in technology to (help) eradicate misspellings and typos.  The original tool, the spell-checker, not only identifies errors but arguably helps people learn from their mistakes.  The spell-checker is not a perfect tool—for example, it’ll catch “buger” but not “Acai bowel”—but it’s been masking poor spelling fairly effectively for about thirty years now.  (At least, when it’s turned on.  I’m going to assume that restaurant people just aren’t very good with computers.)

The problem is, the classic spell-checker is losing out to more modern tools that are less educational.  Smartphones have features that enable you to type sloppily, generating character strings that only remotely resemble words; the operating system is smart enough to make good guesses at what you’re trying to type.  I can type “t-y-p” and it suggests “type,” “types,” “typo,” and “typed” and I can touch any of these to accept that word.  This is especially handy with trickier words like “beautiful.”

When I’m on my smartphone I use the Swype technique, aka slide-typing, where I drag my finger through the letters of a word and, amazingly, the OS recognizes these words, no matter how sloppy I get.  It’s not so good with “Acai” or “mahalo” but does great with most common English words.  If I Swype “beutifil” it seamlessly corrects it to “beautiful,” just as it discreetly turns “awsome” to “awesome.”  Typing in this way, a person could generate readable text for decades without ever learning how to spell.  This is just great, until you’re suddenly forced to use a pen and paper to compose your message.

So, if you think the spelling is bad now in handwritten messages, just you wait.  We’re seeing the mere lack of spell-checker now; in another couple decades, when Gen-Y starts making enough money to rent “candos,” they’ll be even less well equipped to work out tricky words like “bowl” and “awesome” on their own.

Do people also use voice recognition software to compose messages?  I don’t know.  I suspect that this technology is mainly used for giving instructions to your phone, and that the modern generation prefers the silence of typing and Swyping.  That said, it’s hard to really tell.  When you see a guy walking down the sidewalk yakking on his smartphone, he could either a) be having an old-fashioned voice conversation, b) be dictating a message to his e-mail program, or c) be a crazy person talking loudly to nobody or nothing at all, with the phone held up as a prop.

As it happens, I did investigate the efficacy of voice-recognition for large bodies of text:  because I find Swype typing tedious (and didn’t have a laptop with me on vacation), I dictated a restaurant review to my phone.  Needless to say, I’ll be making that review available on albertnet:  maybe not today, maybe not tomorrow, but soon, and for the rest of your life.